Axe-Grinder is a huge warrior with a big axe that can shear through steel.

Terry was about 13 and bored to death in Cinnibar. His main entertainment was to snatch purses from women, race around the block and toss it back to them. At one point, he took a purse from a young woman (who may have been Flux) but ran into a beat cop (who may have been Frank Lamb).

His flippant explanations didn’t get him far. Terry was being taken to the precinct when a fleeing youth ran into our three protagonists.

The youth was apparently a carrier for some sort of disease, and was pursued with a military team. They shot him dead, then took all persons touched by the youth to the Cinnabar Flats military base.

During his detention, Terry showed little sign of being Vortex touched. However, he started dreaming of the Vortex more and more often, and at one point teleported in it. To him, it looked like a dimension from Doctor Strange comics, where he walked until he happened upon a large axe waiting for him.

Just like the inside of the Vortex was straight from his imagination, the axe was the axe that was wielded by a comic books character he had created when he was 8. It was a big blue warrior with a Stormbringer -like axe called Axe-Grinder.

He took the axe and found himself back into the reality – turned into the Axe-Grinder character and wielding the axe. He eventually escaped from the Block 13 detention center, along with Frank Lamb and Flux.

Lamb organized them into a small team called Division 13. Its aim was to free the Vortex mutants and give them a chance at life and freedom.

When the alien Seekers attacked Cinnibar Flats, Division 13 was already engaged in infiltrating the complex. However, this attempt to free a prisoner failed for unrevealed reasons.

A few weeks after that, a fight between Titan, Grace and the Man from the Vortex resulted in many more of the Block 13 inmates being freed. They fled in the surrounding desert before the decimated military could move back and secure the area.

Division 13 continued scouring the surrounding desert. They caught escaped mutants, reasoning with those who could think and talk. They could rescue two mutants named Voxx and Optic, and a sort of three-headed hellhound Optic could talk to.

They also encountered Law, the first escapee of Block 13. But he and Lamb couldn’t agree on their respective goals.

Division 13 disappeared in unclear circumstances, shortly after having met Law. Axe-Grinder became deathly afraid of something in his axe, which biodegraded a few days later, leaving him in a quasi-autistic state. The rift between Lamb and Flux grew, and Optic and the dog disappeared.

Some notes left by Lamb refer to large memory losses, terrible new lifeforms in the desert and “it” not allowing them to leave the area.

While he was flippant and irreverent as a kid, the slightly older Axe-Grinder is a solid, no-nonsense kind of guy with both feet firmly in reality. He’s the straight man of Division 13.

“I can’t believe you people !”

The Cinnibar theme was quite close to the later video game Half Life, and might seem to modern players to be a rip-off of that game. If that is not an obstacle, a GM may wish to incorporate its numerous elements of pervasive horror, covert action, government coverup and moral ambiguity in his campaign.

In the last few weeks, after the second breakout from the Cinnibar base, the desert and the town had become steadily more horrific, with terribly warped monsters lurking around and overt and covert military units hunting them or being hunted by them. It had something of a Stephen King vs. X-Files vs. Predator ambience that was interesting.

In such a dangerous context, the idea of a small force seeking out monsters to *talk* with them, help them and rehabilitate them has potential – and could be reused in your campaign.

Bonuses and Limitations:
Density increase is Always On (-1) and already taken into account. 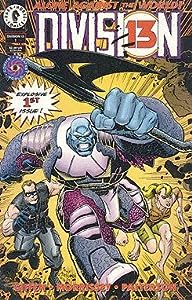