He is abnormally resilient to stress and mental assaults based on fear and doubt, and Psyche (Danielle Moonstar) couldn’t affect him with her powers.

Since this is a PG-13 book, the blows are usually done with the back of the blade or the handle as circumstances conspire against using the sharp bit. But it’s still a large lever to multiply Axe’s strength.

Axe was strong enough to down a young Sunspot in a few blows. ut by the same token couldn’t take Sunspot’s assault for long when he was the one on the defensive. And while he’s a solid hand-to-hand fighter, he’s not exceptional by any mean.

During his second appearance, Axe was drawn as being 6’2” at most. This felt more like a continuity mistake, but it is vaguely possible that his mutant size, strength and robustness were neutralized by the Cage’s technology (in DC Heroes terms no Growth, STR and BODY down to 04 and probably no Mental Powers either).

Axe is a superhuman mercenary, presumably a mutant. In 1983, the Hellfire Club sent him with a small team of their guards to Rio de Janeiro to kidnap Mrs. Nina da Costa – Sunspot’s mother. Though the mission was initially successful, the New Mutants tracked the Hellfire men down and Axe was defeated by Sunspot.

In 1984, Axe was a member of the Gladiators. These were an underground organisation of superhuman (mostly mutant) fighters pitted in death matches before wealthy audiences. By this point, unbeknownst to the fighters, the Gladiators were run by the Shadow King (Amahl Farouk).

In unknown circumstances, Axe ended up in The Cage, a top-secret, ultra-secure prison facility with a dampener field preventing use of super-powers.

In this brutal environment, Axe joined the Brothers, the Black prison gang. It was headed by a former hip-hop mogul and habitual criminal, Mo Money. Axe became Mo Money’s bodyguard.

In 2001, X-Men Wolverine and the Beast were imprisoned in the Cage. Mo Money learned that there was a considerably bounty on Wolverine, and when the hairy Canadian was caught in the brawl Money sent Axe to shank him by surprise.

Wolverine outmaneuvered him, and Axe killed a member of the rival neo-Nazi gang instead, triggering a major refectory battle.

In 2011 Axe, Mo Money and another Brothers enforcer were seemingly murdered by Crossbones (Brock Rumlow) while attempting to escape from the Raft prison.

Axe is visually based on Mr. T  – the The A-Team TV show had recently launched, to significant success, when the character was created.

Big tough macho guy who afraids of nuthin’, and likes being a professional killer. 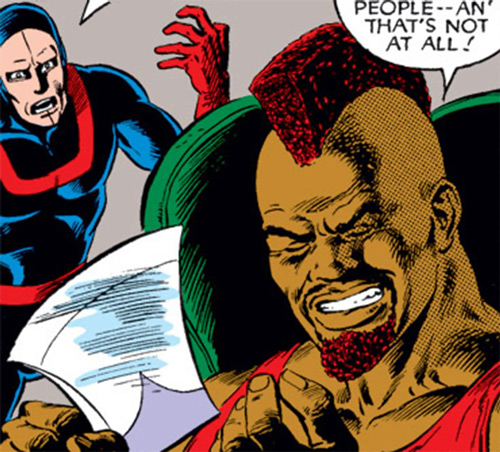