This hired killer specialises in a particularly strange Chinese weapon – the flying axe. Which is an heavy axe head tied to a rope.

He also has some hand-to-hand kung fu training, though this proved negligible when facing Dragon.

The Axeman was a mercenary hired by a man called Lewis. Lewis had a cunning, deceptive plan to steal a US prototype submarine. His daughter Jane was a student at Richard Dragon’s dojo, and was in a romantic relationship with Ben Turner. And Lewis came up with a plan where he would use the two kung-fu fighters as a diversion.

Lewis hired fearsome kung-fu mercenary, the Axeman. The Axeman attacked while Turner was telling Lewis about his plan to propose to Jane. Lewis said that the Axeman was part of a ninja conspiracy. He also said that their agents had been breaching the security at the US naval base he was working in, threatening and blackmailing him to get hold of the submarine.

The plan worked fairly well. But when Turner and the Axeman fought in Lewis’ home, the mercenary accidentally killed Jane.

Thirsting for revenge and having swallowed Lewis’ story, Turner enlisted Dragon’s help to go after the conspiracy. Using ninja techniques, costumes and tools, they infiltrated the naval yard in order to out-ninja the spies. However, they were spotted by the soldiers and had to knock out several security teams.

That was exactly what Lewis was counting on. Lewis, the Axeman and accomplices used the diversion to commandeer the submarine. Turner and Dragon nevertheless reached them before they could leave. Turner rushed the Axeman, but was knocked out by the whirling weapon.

Using extraordinary technique, Dragon engaged the Axeman. He cut the axe’s rope with his ninja sword, before easily defeating the Axeman. But in the meanwhile the sub left, forcing Dragon to swim ashore with the unconscious Turner.

The Axeman was still on the deck at this point. It is possible that he simply drowned as Dragon was swimming away.

Equipment:
His Flying Axe has the following stats [BODY 05, EV 04 (05 w/STR), Rec STR 04, Rec DEX 04, Drawback: On any roll of 5 or less, the flying axe will accidentally hit something the wielder didn’t intend in lieu of its target – unless a roll of 5 is sufficient to hit the target.]

This represent the flying axe’s sheer speed, reach and ability to wrap itself around any obstacle and still strike its target.

Likewise, a specifically trained martial artist (who has taken the Schtick : Flying Axe) who is taking the Laying Back manoeuvre enjoys a +1CS Bonus to his OV against attacks with a lesser reach than the flying axe. 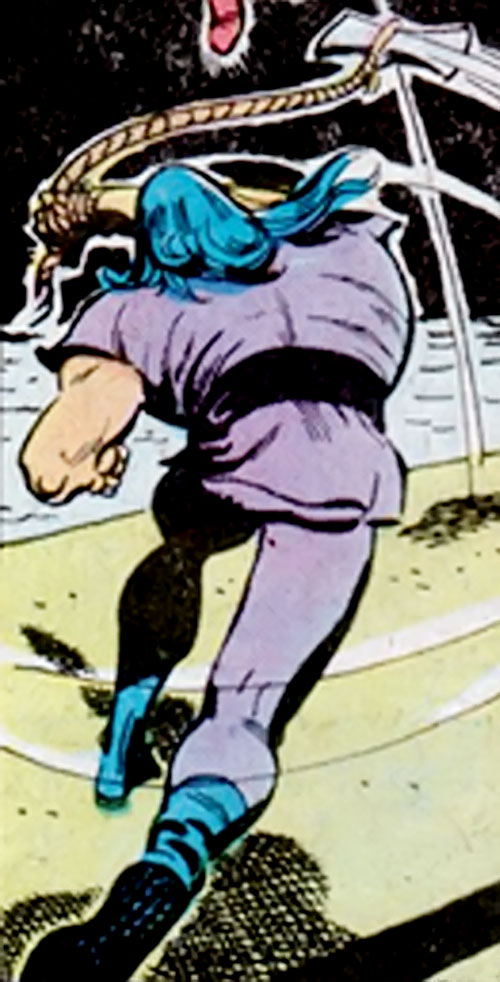