This is a gaming peripheral for PCs running Windows. Its niche is :

I guess it can also be used in applications where you primarily use the mouse, but frequently have to hit some recurrent keyboard shortcuts. Say, Photoshop™ or CAD stuff.

My experience with keypads :

My sense is that it’s chiefly relevant to two categories of people. No, not those who dig and those with a loaded gun.

For the first category, it might work. But you’ve already developed very specific, WASD-based reflexes and motor skills. Retraining to a new interface is a gamble – it could easily turn out that the gains are slim or negative.

Me, my hands tremble a bit and I can’t quite feel them. I can’t really tell where they are. Hitting keys without looking can be a problem, even with 40+ years of typing practice.

So that’s the place I’m writing from. If you’re able-bodied, a lot of what follows ain’t gonna be a problem for you. 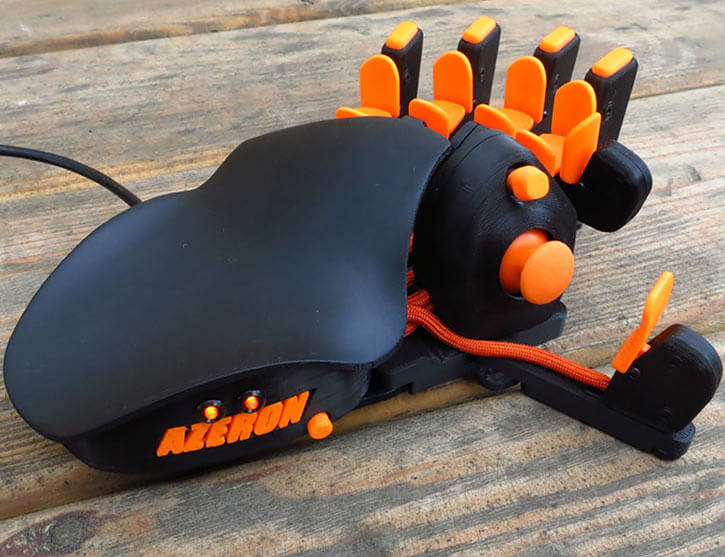 Photo from the manufacturer, but same model and colours than mine.

Now, this is an obscure peripheral from Latvia. It’s made to order, which takes a while, with the pieces being 3D-printed.

Azeron has turned this into a strength, offering customisation options with a bunch of possible colours for parts. And an “extended” model with extra buttons.

OTOH, the most basic model, with a black body and single colour for keys and cables, is already $150. So for most people it ain’t an impulse buy, or even affordable.

The keypad ships in custom, pretty secure packaging. Bad luck definitely exists in international shipping, but it should arrive intact.

You should keep the packaging. Since protecting the peripheral otherwise (say, when moving) gets complicated.

The keypad is heavy enough, and the general construction rugged enough. But if you’re prone to *forceful* movements whilst gaming, à la frothing gamer rage, it’s prolly not for you.

Likewise, placing the keypad in a place where it might fall to the ground isn’t good.

Most buttons are brushed against rather than pushed. This limits their odds of being damaged by forceful moves. But if you have a history of damaging peripherals through excessive pressure, be mindful. The backward-facing buttons could easily get damaged by a clawing, tense hand. 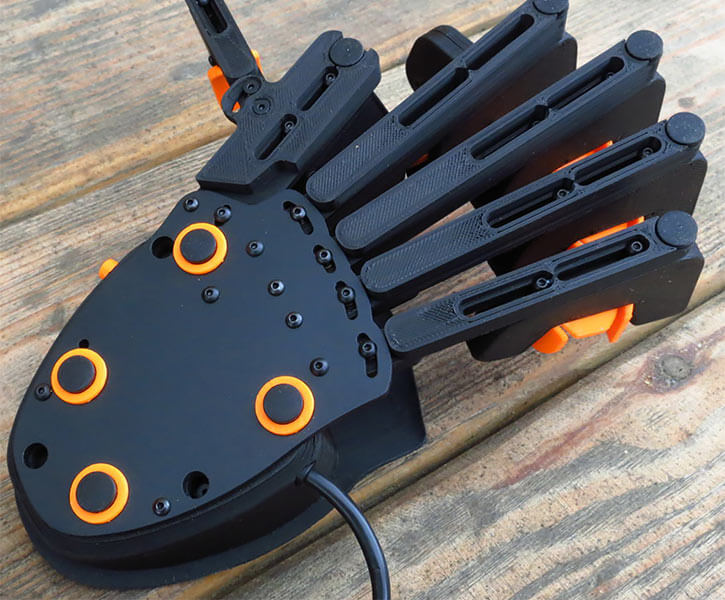 As the quick guide says, install the Azeron software, plug the peripheral in (preferably on a USB 2.0 port to start, since 3.0 can get weird), and start mapping keys.

The keys map can look confusing at first. But simply pressing a button highlights it on the keys map, so you immediately know what is where.

If the configuration works fine but the keypad fails to work, check that it’s set to the right profile, and not to a blank profile. The profile switch is the small button at the base of the palm rest, next to the “AZERON” logo.

Also, if you don’t have a QWERTY keyboard, the keymapping might be QWERTY anyway. And ignore the actual keymap.

The standard, rising palm rest does a decent job at avoiding tension in the palm, wrist and fingers. That alone can’t avoid carpal tunnel issues, but it’s certainly a step in that direction.

All the “spars” bearing the buttons can have their orientation and length adjusted – except for the thumbsticks.

However I’d suggest not tightening the screw right away. Give it time, make sure that the exact position requires no adjustment. Since these screws aren’t exactly bulletproof, repeated tightening and loosening with a cheap screwdriver may damage the heads.

(In fact, it’s been weeks and I still haven’t tightened any screws, it works fine that way.)

FWIW, I’m 5’11” with a slightly above-average finger length, and the default (and max) lengths are about right. If you’re, say, 5’1″ with tiny mitts, the buttons can be moved toward the hand rest by up to an inch.

Most buttons are vertical petal-like pedals, using the same sort of clickety mechanism as a mouse’s button. You brush against them to click. The horizontal ones are pressed like a key, but also feel just like a mouse button.

Having long fingernails might also be a bit awkward. I don’t know.

The thumb can control :

Emulating keypress means that you bind general directions to keys. For instance pushing it forward is interpreted as pressing W, pushing if leftward as pressing A, etc..

This is less free-flowing than a console-style joystick, but it allows for straight WASD emulation. Which avoids a lot of compatibility issues, and is what you need in strafing-heavy games.

I haven’t yet used the thumbstick in analog, 360° mode. If I need that, I’m more likely to break my antiquated Xbox controller out of storage.

The index has… four and a half buttons, I guess. One is horizontal and is pressed. Three are vertical and are clicked by moving your index back, forward or rightward. And one is up there, out of the way, and not that easy to press without clicking the forward pedal.

The remaining three fingers do not have a rightward pedal. So that leaves three immediate access buttons for each, plus one out-of-the-way button.

So for folks who can use five fingers, that’s a total of :

Finger movements are but millimetres long. Each fingertip is surrounded by buttons, so any movement in roughly the correct direction (downward, forward, backward) will result in a key press.

If your hands shake strongly even at rest, or otherwise produce involuntary movements, this definitely could be a problem.

The backward pedals under each finger are the easiest ones to press by accident. Say, if you shift your weight while sitting.

OTOH, it’s easy to press them while also pressing the downward button. This is important for games that have, say, crouch-jumping. Or other actions requiring pressing two keys at once or in rapid succession.

It does the job, it doesn’t get in the way, it’s fairly straightforward.

The more sophisticated part is about the 360° thumb joystick. You can offset its angle, create dead zones, emulate some specific peripherals…

It supports macros, but that’s limited to button presses, delays, and a repeat-while-held toggle. The lack of, say, loop/infinite repeat togglable macros is a clear disappointment, especially for those with repetitive stress injuries.

The software is also compatible with the Re-WASD keymapping software. 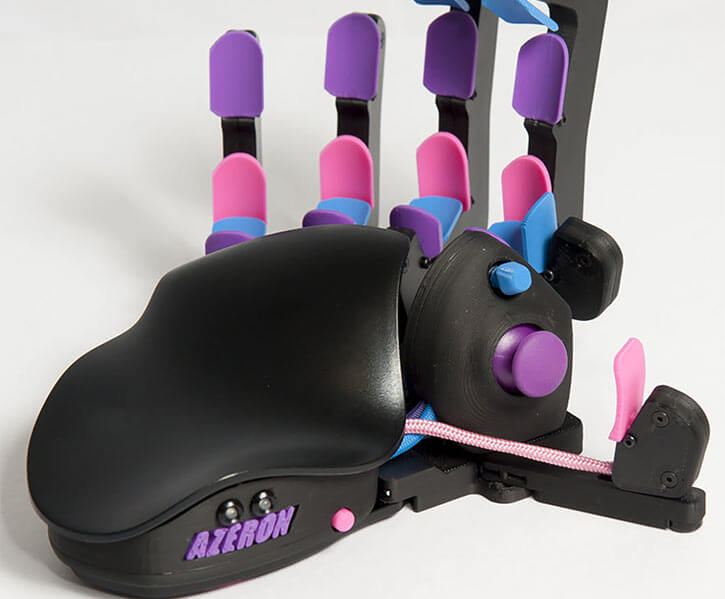 With all options (mostly meaning additional buttons) and some fancy, bi colours.

Let’s take Warframe as a concrete example. It’s an action/shooter MMO with lots of controls, and I set my Azeron and mouse this way :

LMB is fire, scrolling up to attack, scrolling down to melee attack, wheel click to use or reload, RMB to aim (or block in melee mode). I have side buttons but using them is too awkward for me.

Setting attacks to scroll up/down is an old gaming trick to avoid clicking a lot, especially for weapons with a high attack speed. Each increment of the wheel turning up or down is treated as a click by the OS.

Movement is less precise for me, but I have unusually poor dexterity using my thumb. I don’t use smartphones or controllers much, so I prolly have much less experience than most people. Especially yoofs.

The sprint key requires not touching the thumb joystick for a split second. It’s not optimal in games where you have to be always, always moving.

A bit of fumbling occurred for a while, since part of me brain has flipped 3 and 4. But generally it allows for markedly faster and varied use of powers.

Down is jump, back is slide, front is roll/dodge.

Was damn awkward at first, but soon became smooth. Bullet jumps (slide + jump) are a simple gesture, and jump kicks (jump + slide) are markedly easier than with my old scheme.

So far we have 16 (!) buttons in play, counting the mouse (and with the joystick counting as four). But we still need more ! Because, like, Warframe, man !

Down is spoiler mode, up is alt-fire, down is heavy melee attack.

The rapid switch to/out of spoiler mode has proved a boon when fighting Sentients.

Down is weapon switch, back is the gear wheel, front is the map.

I implemented those last, once the other fingers had some idea of what they were doing. Which, of course, resulted in another span of confusion as my brain kept mixing up index movements and pinky movements.

The X key (to disengage from Railjack postings) remains on the keyboard. I ran out of buttons, and this one isn’t time-sensitive. Though I guess I could bind it to M4.

One problem at first was that the hand remained tense due to fear of accidental clicking. Even with more practice, fingers tended to rise and claw up if they were not currently needed. That prevented long gaming sessions, but slowly went away.

Likewise, having to memorise new movements with a bad hand takes up a surprising amount of mental bandwidth. This creates a bit of a tunnel vision effect during the early stages.

So, obviously, don’t teach yourself using this in a game where losing/dying has consequences, such as losses of ranking.

The arms are also locked in position — one on the mouse, one on the Azeron. This might mean pain from bad posture, but the difference from one hand on the keyboard isn’t that significant. I’ve written a bit about desktop ergonomics, if you want.

Obvs, whenever starting a new game you’ll have a fair bit of buttons remapping to do. Preferably to something that carries over from game to game as much as possible. But heh, if you’ve got bad hands you’re prolly used to that.

PC games have begun evolving away from their “fuck you cripples” track record. Among other things, that means they often come with decent remapping. For games that don’t, the solution is to create a specific Azeron profile, mostly bypassing the issue.

To my relief, the Azeron is a good fit for me. Wasting $150 would have been… bad.