*This* Azrael isn’t related to the one with Jean-Paul Valley, the Order of St. Dumas, etc.. He’s an angelic-looking alien who associated with the Teen Titans, mostly from 1985 to 1988.

These are older technical notes, not a full profile. They were part of a short series where we republished hard-to-find Mayfair stats along with stock Who’s Who text. Speciality books were quite harder to find in the 1990s than they are now.

The extent of his powers are unknown; the ones depicted were :

The latter is deduced from the instant mental/emotional link he formed with Lilith. Furthermore, later on, Blood used Azrael much like he used Raven, to funnel in the energy he leeched from the force of human emotion.

The alien also caused both Wonder Girl and Koriand’r to falter when they tried to capture him immediately after his escape from STAR Labs. Azrael to unconsciously manipulate their emotions so that they no longer wanted to attack him and had to fight the urge to protect him instead.

It’s also been implied that he has some sort of internal energy generating powers, although this was never elaborated on.

He also displayed sound-based powers, and was immune to Vic’s white-sound blasts, but this was also never followed up on.

He was extremely agile in flight, able to easily elude Kory’s starbolts. He was also shown to be quite strong, able to win a hasty bought of “tug-of-war” with the Amazonian Wonder Girl. It’s also possible that he’s invulnerable to some degree as he was not injured after a long fall.

Also indicated by story events was some sort of exceptional tracking ability, perhaps linked to his implied empathy and/or low-grade telepathy powers.

Many clues from his early appearances seem to hint that he is from the same planet as the Legion of Super-Heroes member, Dawnstar. But there is as yet no real proof for this theory.

Azrael’s origin is a mystery, even to himself. All that is known is that Azrael is an alien being whose spaceship crashed somewhere in the past atop Mount Michelson in Alaska. Burying itself in the ice, Azrael’s ship lay undiscovered for an undetermined period of time.

Scientists from S.T.A.R. Labs discovered the icy tomb, and the cryogenically frozen body of the winged alien being which lay within. Using the research of the late scientist Elinore Stone, they brought the spaceman out of his frozen state and into a world in which he did not belong.

Soon after, he met he New Teen Titans and Lilith, falling hopelessly in love with her. Lilith reciprocated those feelings, but to a much smaller extent. This incident occurred after Terra’s betrayal, but before the ultimate defeat of Trigon.

The winged man was tricked by the Church of Blood into thinking he was Azrael, the angel of death. It was he who dropped the broken-spirited Brother Blood off at a monastery when the villain’s mind was broken by Raven.

Azrael later flew away. It is possible he went on to live with Lilith.

A statuesque being, handsome and human-like, except for a pair of huge, white feathered wings. He resembles a biblical angel but is instead an alien from an unknown planet. He is tall, over six foot tall, twice that in wingspan. He has long, purple wavy hair and golden eyes.

The winged man does not know who he is, from where he comes, or what his purpose is in life. All he knows is that he loves Lilith. When he’s separated from her, he has an amazing talent for spewing forth the most inane, love-smitten monologues that can drive even the most tolerant Titan crazy.

Azrael is obviously a very confused young alien. He is naïve and very single-minded. He is not much of a fighter.

This alien was much like Koriand’r in nature, passionate and emotional, naïve and trusting, and therefore rather easily tricked by the devious Church Of Blood. Unlike Kory, who was quick to anger when harassed, ’Azrael‘ was quickly moved to tears when frustrated or distraught.

One other meager clue; the alien would call on “The Lords Of Light And Darkness” when stressed out. This is much like Kory would exclaim “X‘hal !” and Raven would cry for ’Azar‘ when under duress. 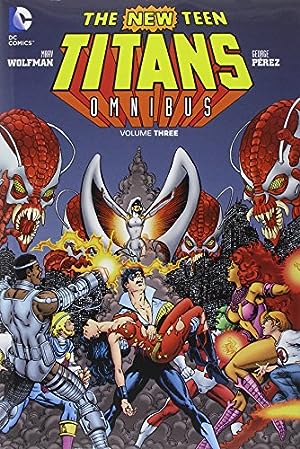