B-ko’s main ability is her capacity to design, plan, and build powerful mecha  (and presumably other things) overnight.

B-ko’s ultimate technological triumph is her Akagiyama-23 battlesuit. Despite its skimpiness, it gives her strength and speed on par with the superhuman A-ko. It also allows her to fly and has a variety of heavy weaponry, ranging from mini-missiles to an energy whip.

She tends to wear the Akagiyama beneath her normal clothing much of the time, so that she is never caught unprepared for a battle. Either that, or it has a screwy form of Insta-change that activates when B-ko rips her clothes off.

Mari, Asa, Iné and Umé are B-ko’s only friends, although “employees” might be a better term. They spend most of their time doing whatever B-ko orders them to.

This can range from reconnaissance work, to piloting B-ko’s enormous war machines, to helping her stage commando raids against anyone who dares to cross her. They are apparently not paid well, and gripe among themselves that they can only afford to eat ramen noodles most of the time.

Umé is chubby and wears spectacles. Iné is skinny and buck-toothed. They drive the various mecha. Though it is not known who all was piloting the five Arashiama mechs, since the Four were all in class at the time. Asa is fairly normal-looking, and does most of B-ko’s spy work.

Mari stands at least eight feet tall and has enormous muscles, and does whatever fighting or intimidation is necessary. She is an obvious parody of Kenshiro from the anime/manga series Fist of the North Star. She looks quite a bit like Ken, uses a similar fighting style, constantly tatters her clothing when flexing and pretty much constantly growls in a deep manly voice.

However, her speaking voice is a little girl’s.

The vintage trailer (in Japanese, because I hate Freedom – ed.).

Project A-ko is a screwball comedy in the anime genre. It revolves around three girls, A-ko, B-ko, and C-ko. These are references to the Japanese custom of listing film extras as “A”, B” “C”, etc… Thus A-ko, B-ko and C-ko are literally “girl A”, “girl B” and “girl C”. They all attend Graviton High School for Girls.

A-ko is easily the strongest being on the planet. However, A-ko considers herself to be perfectly normal, and worries mostly about getting to school on time. Her best friend is Shiiko (or, “C-ko”) Kotobuki.

The two girls have just transferred to Graviton High School. There they catch the attention of Biko (or, “B-ko”) Daitokuji, a brilliant (but spoiled-rotten) classmate with a knack for building mecha in no time flat.

B-ko develops an unexpected crush on the innocent C-ko, and is determined to get A-ko out of the picture at any cost. Her determination goes from being merely obsessive to homicidal when she realizes that she and A-ko were rivals back in kindergarten. Logically enough, she thus creates a series of killer mecha to defeat A-ko before the morning bell rings.

Yet all of them are destroyed effortlessly by A-ko.

In a final attempt at victory, B-ko makes the fight more personal by donning her infamous Akagiyama-23 battlesuit. Then she challenges A-ko to a “fight to the finish” that devastates the school and parts of Graviton City.

Aliens. I mean, sure, why not.

Meanwhile, Earth is being threatened by an massive spaceship from the aliens of the Lepton Kingdom of Alpha-Cygni. These have come to Earth to retrieve their long-lost princess, who turns out, oddly enough, to be C-ko.

B-ko teams up with A-ko to rescue C-ko from the clutches of the cross-dressing alcoholic aliens (I love that phrase!). There’s a massive fight, the ship crashes, and A-ko, B-ko and C-ko get home safe having saved the day.

At the end of the film, a brief glimpse of A-ko’s parents is shown. They appear to be American superheroes Clark Kent and Diana Prince, better known as Superman and Wonder Woman. This, apparently, explains why A-ko has such superhuman abilities. Their presence in Japan goes unexplained.

But none of this quite explains B-ko’s superhuman intelligence, C-ko’s strange appeal, or the general weirdness that occurs around the trio.

A tall, willowy schoolgirl with long, lavender colored hair and eyes. Appears cool and somewhat arrogant until she can’t get what she wants, then she’s liable to get downright scary.

Occasionally dresses in a skimpy battlesuit that is incredibly flattering to her figure.

B-ko’s intellect is a truly frightening thing when you take into account it’s driven by such a selfish, childish personality. She can be friendly and helpful as long as she’s getting her own way. But anyone who crosses her is likely to be confronted by huge animé style mecha.

B-ko Daitokuji is well-known in Graviton High as the daughter of a local industrial tycoon. She is thoroughly spoiled, arrogant, and dismissive of her fellow students. Although seemingly calm and poised in public, and always deferring to her teachers’ authority, B-ko has a tremendous temper. It flares up whenever she doesn’t get what she wants.

Her desire to obtain C-ko’s affection from A-ko develops from regular obsession to all-consuming megalomania. B-ko proves that she is capable of doing anything, even attempted murder, to achieve her goals.

Her unhinged rants reveal that despite her superiority complex, she is actually rather insecure and troubled.

Apart from her technological knowledge, B-ko also appears to have a keen mind for literature. She can quote Japanese poetry with little effort.

(To herself) “I’ve got to have that girl for myself, and I know how to get her… First I get A-ko out of the way. Then I tell Mari to frighten her. I come to her rescue… and she’ll fall into my lap. And A-ko’s history.” (Laughs)

“I’ll have what I want no matter what it costs !”

“Revenge is going to be sweet, sweet, sweet… and you, A-ko are going to die, die, DIE !!!” (Cackles maniacally)

A-ko: “Haven’t you figured it out yet ? You can build all the giant robots you want, and it only makes us late for school !”
B-ko: “Is that all you can think about ? Being a good little girl and charming the teachers ? Well, naturally it never occurred to you that some of us aren’t born with the same charm ! But you don’t care ; you’re always the good girl, while I have to be the one everyone said was spoiled ! Okay, if people say I’m the bad girl, then that’s what I’m gonna be !”
A-ko: “Look, can’t we talk about this ?”
B-ko: “It’s too late !” (rips away suit to reveal the skimpy Agagiyama-23 battlesuit)

Considering the weirdness that happens so often in Graviton City, Project A-ko is pretty obviously an Otherworld parallel to both the TV series Smallville and the Giffen JLI series.

Since A-ko is the decendant of her world’s Superman and Wonder Woman, she likely is a Hypertime  (if that’s still applicable) counterpart of a possible future. Kingdom Come springs immediately to mind, though the spirit of A-ko’s world doesn’t fit the grim setting. Imagine Kingdom Come crossed with Giffen’s JLI and you’ve got it.

Bonuses and Limitations:
Superspeed: Usable only on Mental Tasks or to build Gadgets.

Bonuses and Limitations:
Gadgetry and Scientist are possibly Powered Skills.

In any case, Most of the mechas and battlesuits aren’t really seen *doing* anything, and thus are mostly speculation. None of the various mecha seem to have Hardened Defenses, which would be standard for anime‘ mecha.

[BODY 08 STR 08, Growth: 01, Energy Blast: 08 R# 2, Limitations> Growth is Always On (-1) and Already Figured In (+1)]
Based on the powersuits shown being driven/played with by the students at Graviton High, The standard powersuit built by B-ko is a relatively simple 8’ tall powersuit that enhances the wearer’s strength, provides protection, but little else. It is more like a vehicle than a true powersuit, but not quite a mecha in the anime‘ sense, thus does not have Italicised attributes, and is operated by using the Vehicles (Powersuit) Subskill.

Energy Blast assumes that the suit has some offensive capability beyond its Str attribute.
Note that the suit itself has no Dex, and thus is basically required to use the Driver’s Vehicles skill as Dex (Which, considering B-ko’s minions, is probably low.)

[BODY: 10 STR: 10, Jumping: 03, Claws: 12, Laser Beam: 12, Illusion: 08, Growth: 02, R#05 Misc: Transforms from Vehicle to Mecha. Bonuses & Limitations> Claws is Selective (+1) Ranged (+1), and represents the Max Arm Crush, Drills & the Max Bomber Saws ; Illusion can only create duplicates of the Max armor (-1), and represents the Max Vision Holograms ; Growth is Always On (-1) and Already Figured In (+1). Note that the suit itself has no Dex, and thus is basically required to use the driver’s Vehicles skill as Dex (which, considering B-ko’s minions, is probably low.)

A 15-foot tall mecha that B-ko designed and built overnight, the Max had a major design flaw in that, when the mech reconfigured to robot mode, the driver could not reach the controls, and thus it was effectively immobile. A-ko incapacitated it quickly by knocking it off its feet.

The Arashiama Five are giant, 30‘ tall mechs that B-ko built (again, overnight) to destroy A-ko. They were comparatively slow, and while they would be highly dangerous to a normal person, given A-ko’s speed, strength and fighting skills, weren’t really much of a threat at all.

Note that the suit itself has no Dex, and thus is basically required to use the Driver’s Vehicles skill as Dex.(Which, considering B-ko’s minions, is probably low. 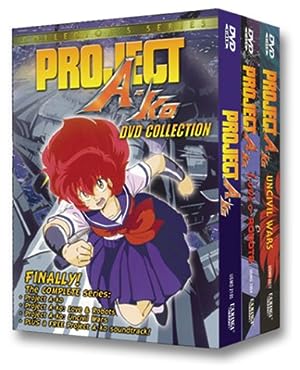 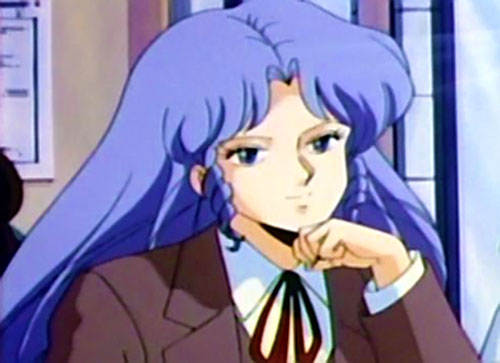 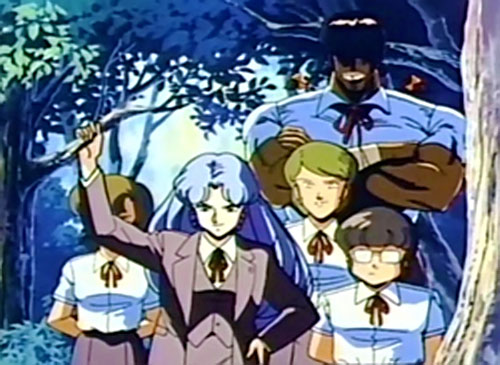 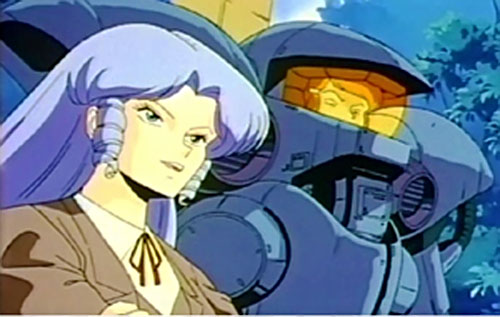 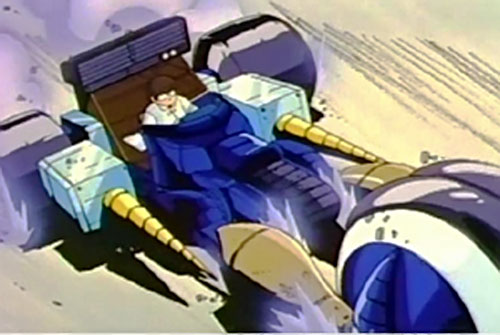 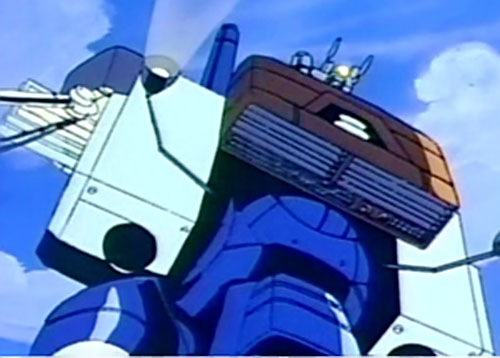 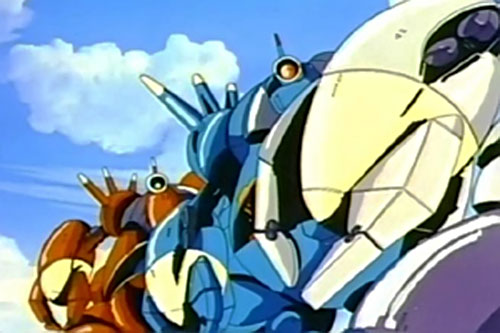 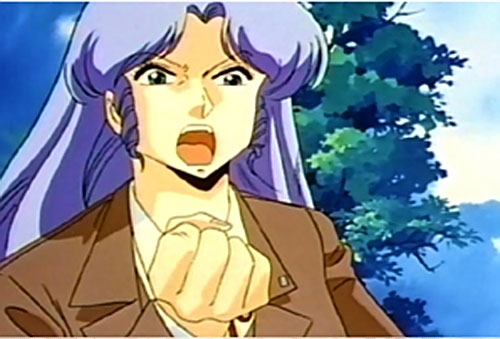 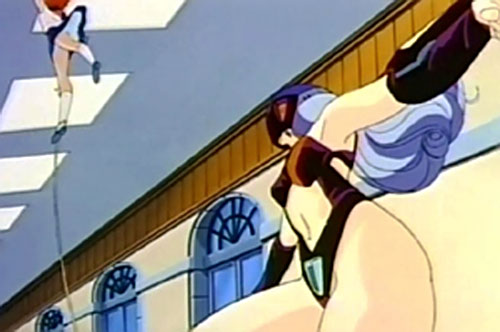 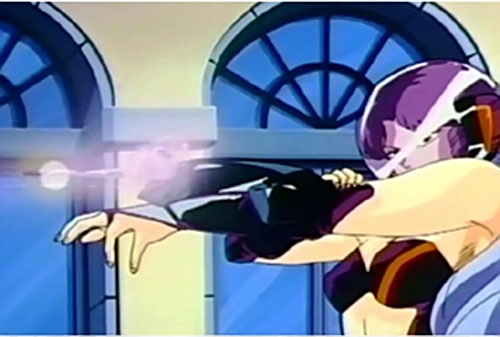 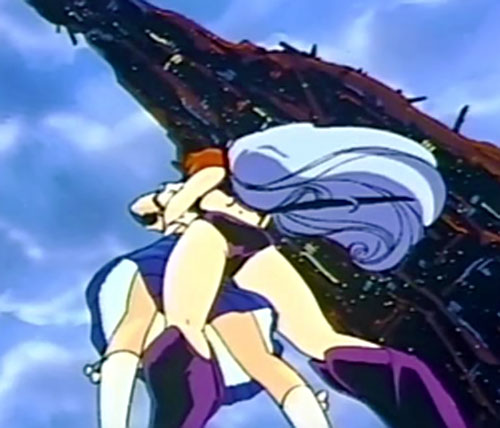 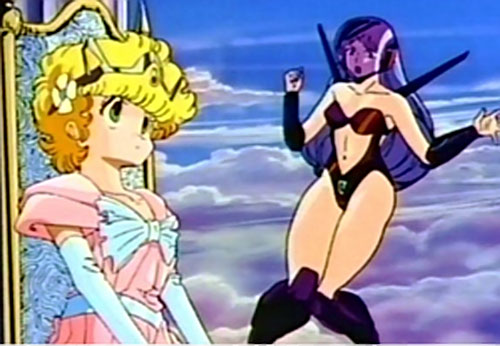 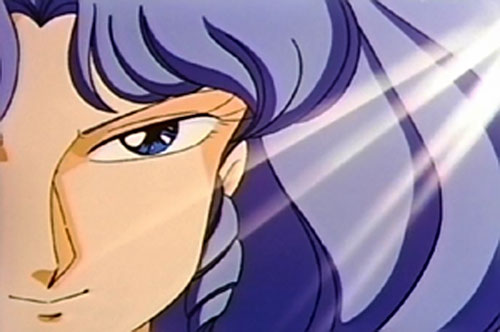