Baby Bat has the same abilities as Man-Bat, but he is much smaller.

“Baby Bat” is the son of Man-Bat. Unlike his sister Becky, he was conceived after Kirk Langstrom’s DNA had been altered by the Man-Bat serum, and is a mutant. As such he has no human form, and his hybrid form is his normal appearance.

As a unique specimen, Aaron was for a time hunted by a band of criminals who wanted to use his abilities. His mother and sister had to use the Man-Bat serum on themselves to gain the necessary oomph to defeat the would-be kidnappers.

This happened just after the big quake that wrecked Gotham city. As a result, the police was stretched too thin to help the Langstoms.

All three bat-creatures were eventually reunited with Man-Bat. They started roosting in an abandoned tower at the Brentwood Academy for Boys, a private school in the Gotham suburbs.

Robin (Tim Drake), a student there, spotted Aaron when ordering pizza late at night. Baby Bat swooped from the darkness and stole one of the pizzas. After contacting Jason Bard, who had access to four doses of the antidote, Robin started hunting the bat-creatures.

Despite the interference of Jaeger, Robin managed to turn Francine, Becky and finally Kirk back to their human form. Francine prevented Tim from shooting Aaron, as the antidote wouldn’t work on him and was likely to have fatal effects.

Bat on the run

Aaron later flew away from home for a few days. He felt guilty, as his parents fought over the lack of progress in treating him. He covertly foudnd refuge to the Batcave until his father tracked him down.

Kirk Langstrom didn’t want to ask Wayne for help since he assumed Wayne was too busy with his Batman career. But Wayne told him it was OK and he wanted to help despite his other responsibilities.

Before leaving, Aaron told the local bats they could move back to the Batcave. Alfred assured him he wouldn’t spray bat-repellent anymore.

Baby Bat seems to be about two-years old, with the usual vocabulary and attitude for a somewhat mischievous and brave 2 years old. He is fully adapted to his body. For instance he moves entirely in 3D, and flying is by far his most natural mean of locomotion.

Obviously, he totally trusts his parents, and is very likely to try to physically defend them if they are threatened. His voice is inhuman, probably quite high-pitched. His diction is still that of a two years old (“bawooon” for “balloon”, etc.)

This writeup centers on Baby Bat when he was very young. His last known appearance at the time of this writeup showed him having grown up quite a bit. He’s now 6 or 8 (never mind the compressed timeline…).

Aaron has a fairly normal personality for a kid his age. But he is a bit moody because he feels he’s a burden for his parents and being weird-looking is his fault.

He has learned to communicate with bats, and treat them as pets. He also seems to think the Batman is a great hero and seems to want to be more like him.

Aaron Langstrom, current
“You didn’t want to ask Mister Wayne to help with our problem. Fixing me, I mean, so I can change like you and mom and Becky.” 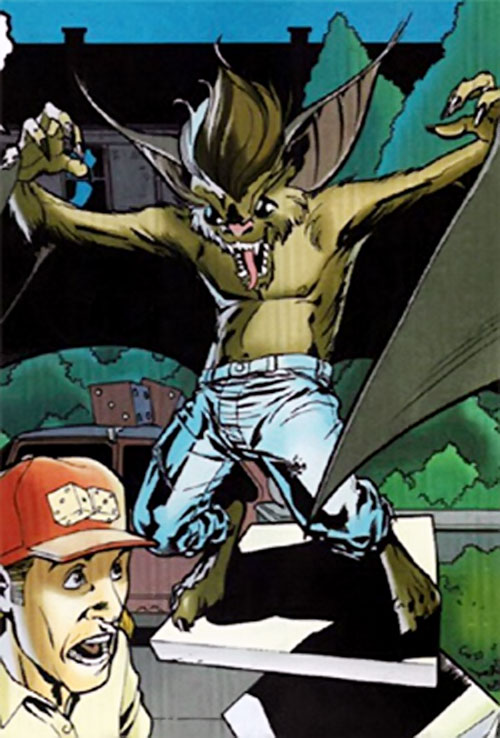