In addition to the normal Morituri physical enhancements, Backhand could reflect and divert any energy aimed at him. He claimed to have more control over his power than Vyking did, but never really demonstrated why this was the case.

Greg Mattingly was originally an actor hired to play Vyking in the Morituri holoshow. Once Vyking died, he lost his job only to find out he was eligible for the Morituri Process. Studying Vyking and the other Morituri while on the show made Backhand realize how important what they did was, and he promptly volunteered.

Backhand was a good soldier, always ready to follow someone else’s lead. Never one to come up with his own ideas, he did the best he could with his abilities. He typically shielded others so that those with more offensive abilities could take the lead.

During an attack on the team by super-hordians, the Strikeforce was losing badly. Backhand found himself being crushed and strangled by two hordians while his teammates were faring equally poorly.

He used his powers to summon up the Morituri Effect inside him and amplify it, taking out his attacks and giving the rest of the Strikeforce the opportunity to turn the tables on their attacks. He sacrificed himself so that the rest of the team could live.

A tall, handsome blond man with short curly hair. He wore a white body suit with a blue V-shape on his chest and shoulders.

Backhand always felt a little over his head on the team. His method of compensating was to talk like a holoshow character, spouting hokey clichés and speeches whenever he felt nervous. He had a serious panic attack the first time one of his teammates succumbed to the Effect, but after that managed to pull himself together and carry his own weight.

Backhand: “We’re Morituri — the champions of Earth — and we’re going to give them a show they won’t soon forget !”
Brava: “Don’t lay it on with a trowel, Greg !”
Backhand: “Sorry. I keep slipping into what I think superheroes should sound like !”

As written, the Morituri were in their own stand-alone universe.However, the idea of the Morituri process works in any universe. Perhaps a new, more determined alien invasion attacks and earth’s normal superheroes are outmatched. STAR Labs or Lexcorp could develop this process to help turn the tide. 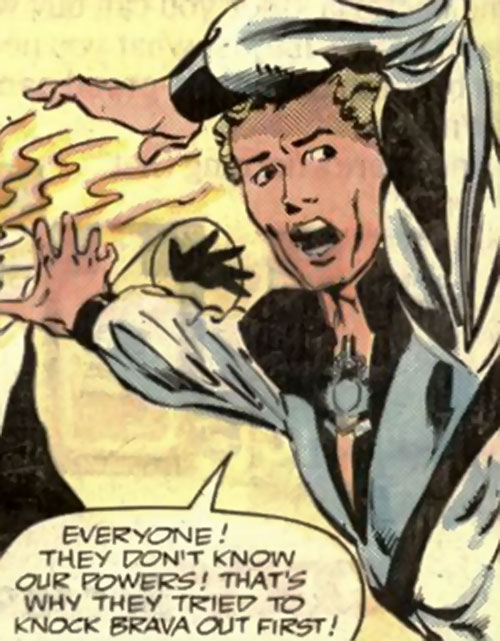