Backlash’s arms are strong, stretchable tentacles. There are three smaller sub-tentacles by the last third of the main limb. He can strike with them with frightening speed and accuracy, and they make him very difficult to engage in close combat.

Backlash clashed with the JLTF at the Aryan Nation compound. He later joined the greater Cadre assembled by the Overmaster at Mount Everest.

He was later part of those villains who requested sanctuary at the Justice League’s HQ, to escape being deported to an alien world.

In 2010, Backlash returned as the apparent leader of a new version of the Aryan Brigade including Luftwaffe, Bonehead and Reb. They attacked a casino in Arizona, claiming to defend White gamblers whose money was being leeched by the Native-run casino. They were swiftly defeated by Black Condor (John Trujillo) assisted by Firebrand (Andre Twist).

Like most members of the group, Backlash comes across as angry and poorly educated.

Backlash a thug and a bully with a paranoid, egocentric edge. He’s particularly impatient, perhaps even hyper.

“Who sent you to spy on us ? What were you after ? My inquiring mind wants to know ! Answer me, spy ! Backlash doesn’t like being ignored !”

(Fighting the Elongated Man) “Save your taunts, eraserhead. If anybody’s going to take a whipping, it’s you ! But why prolong the agony ? Sweet dreams, stretchmark !” 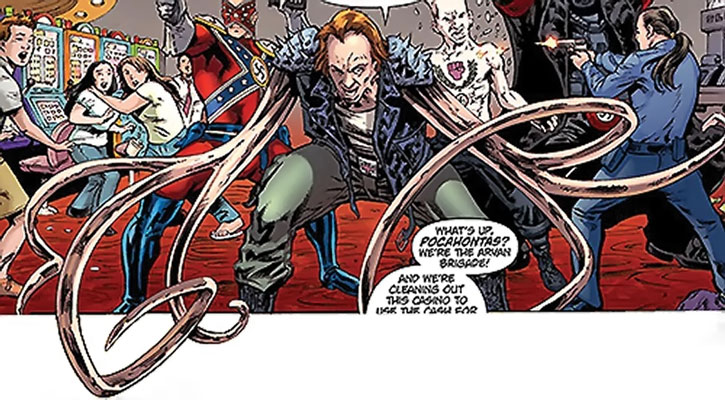 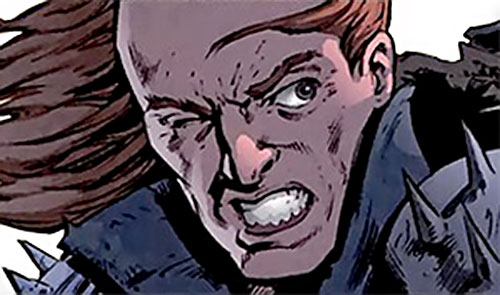