He was near the core of what would became the Wildstorm Universe – being a former member of Team 7, a military unit where many key Wildstorm characters served. His book seems to have been less successful than the early Wildstorm’s stars, though (such as the WildCA.T.s).

Our Backlash notes are really really old – mid-1990s I think, though there may have been later updates. So you should consider them more as a time capsule from the previous century than as a modern, full-featured, leather upholstery modern writeups.org profile.

Exposure to the Gen-Factor gave Backlash the ability to manifest “psi-whips”. These are telekinetic tendrils that extends from the back of his hands. The Psi-Whips can be used to pick up objects (in DC Heroes RPG terms, Stretching), or to generate a psionic  pulse that renders their victim immobile (Snare).

He also can strike with them (Stretching), generally substituting his Martial Artist for his EV when doing so.

Backlash also gained a healing factor  from the Gen-Factor. As for his ability to dematerialize into a gaseous, misty state, it’s a power he’s had for his entire life. It is believed that this attribute is derived from his Kherubim heritage.

More recently, Slayton’s body rejected the Gen Factor due to his halfbreed Kherubim genetic makeup. He has now lost his regeneration powers, and the misting ability can only be used a few times a day at most. However, his whips are now more powerful.

Marc Slayton is apparently an alien (Kherubim – though only half) who came to Earth during the original war with the Daemonites hundreds of years ago. Most of his memory of that time is lost to Slayton though an occasional flashback does occur. At the very least it is known that he has been in both Medieval Europe and Feudal Japan, circa 1645.

In more recent times, he was in the military. He served in the short-lived Team 1 during the mid-50’s under the codename Slay. Not long after that he was eventually moved into I.O.’s deep combat op unit (code-named Team 7) where he served up until their disbanding.

During his stay, he was, along with the others, exposed to the Gen Factor, an experimental “drug” that granted them phenomenal psionic abilities.

While Slayton developed the same powers as his teammates, his long-term reaction to the Gen Factor was decidedly different. As the rest of Team 7 began to gradually lose their abilities, Slayton’s power seemed to mutate into the ability to project psionic tendrils that he refers to as “psi whips”.

For their last mission, Team 7 was sent to Leningrad to “rescue” one Dbvochek. He was a Russian scientist who was one of the few living people who knew how to manipulate the Gen factor. However, their real objective, known only to mission leader Lynch and Slayton, was to kill the scientist.

After they had successfully completed the extraction, Slayton pushed the scientist out of an helicopter. Slayton’s action infuriated Cole Cash (now known as Grifter), and their relationship has fluctuated from hostile to extremely cool from then on.

Nonetheless, when most of the former team went rogue, Slayton made a deal with the National Security Czar, Miles Craven, I.O.’s first director. The deal guaranteed the safe flight of Team 7 and their children in exchange for the unquestioned loyalty of Cray (aka Deathblow), Lynch and himself. Craven agreed to Slayton’s terms, but secretly continued to hunt Team 7 and their children, the Gen13.

Slayton was later assigned as a mole in the UN’s StormWatch organization. Much as he abhorred his assigned task, he proved to be a vital member of his new team, serving as leader and combat drillmaster for over 15 years. 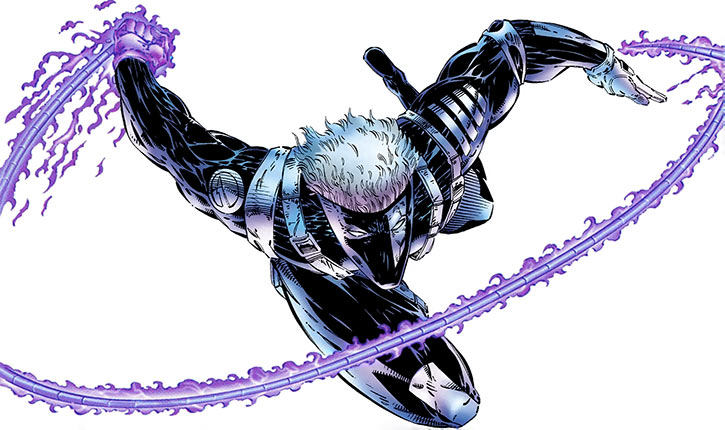 After losing most of his team in Kuwait, Slayton stepped down as leader and became StormWatch’s full time trainer.

He also met and fell in love with a StormWatch operative, Diane LaSalle. He was on the verge of proposing to her when StormWatch was attacked by four Daemonites. LaSalle was possessed by one, who then proceeded to let loose the very powerful team of destroyers called the War Guard from their StormWatch prison.

After an intense battle, Backlash was thrown into space while the LaSalle-possessing Daemonite, known as S’ryn, launched a powerful prototype ship and attempted to destroy StormWatch’s base.

Backlash managed to board the ship and stop S’ryn. But when the Daemonite was forced to separate from LaSalle, he took a piece of her soul with him. Diane was left in a coma.

At Jack’s brownstone in New York, the two were attacked by a team of Black Razors sent by I.O. to retrieve Slayton for a mission. They persuaded Slayton to go to a former I.O. facility on Caballito Island to rescue former Team 7 teamleader John Lynch, now I.O.’s director.

Lynch had been kidnapped by Robert Diaz, another former Team 7 member who had renamed himself Bloodmoon. Slayton and his old enemy, Cole Cash, who was now known as Grifter, overcame Bloodmoon’s Kindred, a horde of animal-men created by the facility. In exchange for Slayton’s efforts, I.O. gave him access to their database.

Shortly afterwards, Slayton freed a former Cabal mercenary, Taboo. She was held Purgatory Max, a maximum security prison located in Alaska. Slayton needed her inside intelligence on Daemonites. The two began tracking S’ryn down and finally managed bring LaSalle back to consciousness.

A few months later, Backlash and Diane went their separate ways – while Diane was in a coma, Slayton had been unfaithful to her with Taboo. Though distraught, Marc sought Taboo out to fulfil his end of their bargain and help her clear her name. During this time, Marc learned more of his past as a Kherubim as his powers became unstable.

They saved Gilbert Branum, one of the scientists who created Taboo’s symbiotic armor. But Marc apparently then died as his body fought to remove the now mutated GenFactor from his system. Though he actually survived, Marc’s powers still suffered unpredictability for some time after that.

It was also during this time that Slayton learned that he had a teenaged daughter from a past lover when the girl came to live with him. Marc is still attempting to cope with gaining a daughter like this, though she and Taboo seem to have developed a close relationship.

However, StormWatch finally found out he had been a US government mole all along. They sought to bring him to justice for his crimes against them – but he managed to defeat them.

During the “Brothers in Arms” conspiracy with Deathblow, Marc, Dane, and Cray were lured into a site where Slayton’s old fiancée LaSalle was supposedly under attack. The situation was actually a setup to lure Slayton in and strip him of his GenFactor. It resulted in the death of LaSalle as she attempted to save Marc’s life.

Devastated, Marc joined the others in their storming of Gamorra. There he was separated from the rest and fell in with Cybernary and her rebels. Along the way, Marc learned that he had yet another unknown child, this one in his early 20’s, who was under Gamorra’s control. However, the boy escaped and Marc’s friend Cyberjack died from a cortex bomb.

Backlash teamed with Cybernary, Spartan and Union to free all the super-powered beings imprisoned on the island.

Upon returning from the moon (where the “Fire From Heaven” event took place), Marc was approached with an offer to work for a government Paranormal Investigation (PSI) agency. In exchange there would be a clean record for Taboo and himself. Accepting the offer, Slayton now works as a field consultant, investigating strange happenings.

Marc has white hair which he usually keeps cut short. His mode of dress ranges from a pair of jeans and a T-shirt when casual to a stereotypical MIB suit when in the field.

As Backlash, he wears a black bodysuit with some bands of white and a black mask, which leaves the top of his head uncovered, bearing his eye-mark from his Team 7 days. He usually also has at least one belt pouch and his combat knife.

Slayton is something of a stick in the mud at times. He very much believes in the discipline and order of military procedures. Though he does have a lighter side he tends to keep it hidden well away.

He cares for Taboo, though he will not admit to himself just how much. Similarly, he also loves his daughter but has a hard time showing his affection and usually assumes the role of disciplinarian.

In combat, Backlash is usually agile and mobile. He always keeps moving and never gives his attacker a clear shot. He takes every advantage he can and never lets up on an opponent.

Ideally, Team 7 could have been a precursor for the Suicide Squad. Seeing as how creating their own superhumans also brought about the problem of controlling them they abandoned the plot (mostly) and later decided to bring in more expendable resources. A place in the ground crew, perhaps with a relationship with Flo Crawley instead of Lasalle, could make sense.

As to Slayton, he could have served as a combat trainer to any government sponsored group. Perhaps, if you want to alter continuity, he could have even served in Rick Flag’s place as field leader of Suicide Squad.

Before his body started rejecting the Gen Factor, Slayton had different abilities : 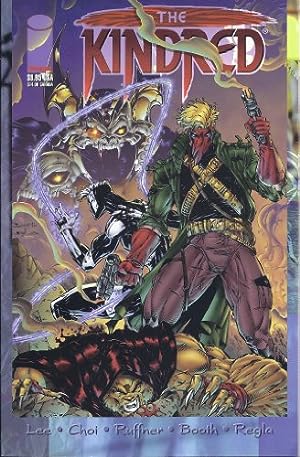 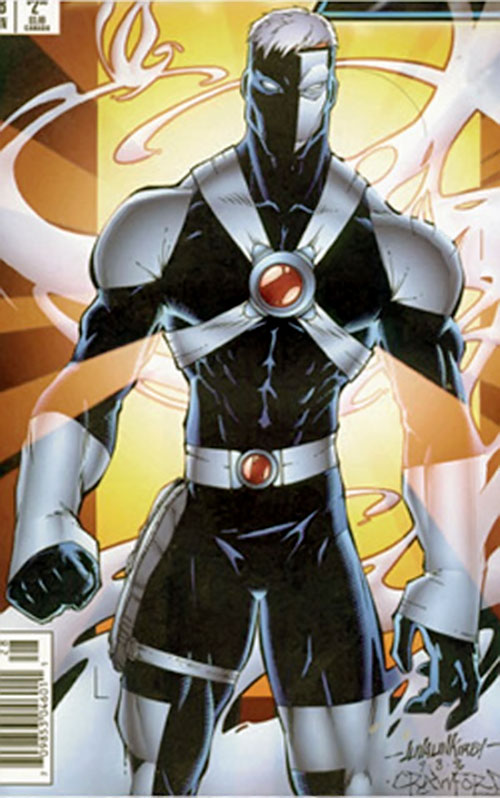 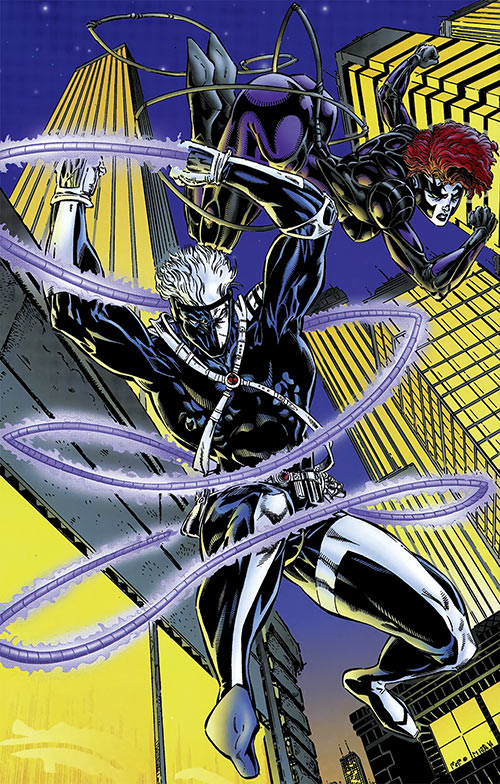