Bad Axe carries a large and sharp axe, which is used for all-offensive purposes.

He is in pretty good shape and surprisingly resilient and tough.

He appears connected with the criminal underworld as well. This probably comes from his activities before he joined the Circle.

in 1994 the vigilante Mace burst onto the scene by eliminating 30 members of the Vicious Circle in a short period of time. He garnered a lot of interest. Bad Axe carried out extensive research and decided that Mace was unstable enough to be turned over into a villain.

He delivered a briefing session to OverLord and received permission to approach Mace (Savage Dragon #10). However, he was knocked unconscious and rejected immediately. He may have been marked for death too but Officer Alex Wilde arrived to try and recruit Mace for the Chicago PD. This caused Mace to flee (Savage Dragon #11).

Following this defeat, Bad Axe was sentenced to time in Stronghold Prison. He remained there until the escape was orchestrated by CyberFace during the closing stages of the Vicious Circle. Cyberface had wanted the criminal group to be near full-strength when he took control of them.

As Bad Axe was not seen after this, it can probably be assumed he was one of the few dozen freaks to have been stopped by the heroes and police officers led by Dragon (Savage Dragon #26).

Bad Axe became a normal human in the wake of the Nega-Bomb explosion caused by DarkLord and the Covenant of the Sword (Savage Dragon #75).

He was then left to start a new life for himself. But that was doomed to failure as Universo consumed Earth as his next meal (Savage Dragon #103).

On the alternate Earth called Savage World, history took a different turn. Bad Axe had remained a loyal operative of OverLord right up until his death.

Due to the changes to this timeline, CyberFace had never been apprehended. Thus, his Annihilators were able to breach the Vicious Circle’s defenses. OverLord was successfully eliminated which caused a schism within the ranks.

A faction broke off from the primary division of the Vicious Circle with Bad Axe among them. But CyberFace conquered first New York City and then the entire Earth using the technologies of the Martians and Cosmic Cops.

Bad Axe and the rest of this discarded Vicious Circle group were left behind in the devastated Chicago. They were cut off from the resources of their parent organization.

The abandoned Vicious Circle lost some of their members over the next few years due to the hardship of life within Chicago. They were in shambles and led by HellRazor when their enemy the Dragon recruited them for revenge against CyberFace. Bad Axe was present in the raid on the White House which ultimately led to the defeat of the world’s ruler.

Dragon had been forced into combat with the brainwashed SuperPatriot whom he dispatched with relative ease due to his reduced mental faculties. As he moved onto pursue CyberFace, Bad Axe had attempted to behead the fallen cybernetic superhero.

Despite the warnings of Dragon, he proceeded in his decapitation attempt and was shot through the head for his troubles, killing him instantly (Savage Dragon #93).

Bad Axe is a muscular male that wears leather straps all over his body as his costume.

He is bald and usually grinning while holding the big (bad) axe in his hands.

Bad Axe is a dangerous psychopath who enjoys cutting down people with his large axe. He will also cut off the throats of any defeated, unconscious foes if given the chance, seeing that as his natural right. He’s, in fact, quite blood-thirsty, and works with unusual glee and a large smile on his face.

Despite being a psychopath he can also judge the mental stability of others reasonably well.

Bad Axe probably joined in as a member of the Vicious Circle due to the opportunities for gross violence offered within that line of work. He will perform work as ordered, but will break orders if a good opportunity for slaughter presents itself, although he generally is a good follower.

He does not speak very much, and often stutters when he does, apparently not feeling at ease around other supers.

He seems to be more intelligent than he appears. Quite probably he enjoys intimidating ordinary people.

Dragon: [as Bad Axe prepares to cut the throat of a defeated SuperPatriot] “Drop it, Bad Axe. I’ll blow your brains out, damn it ! We don’t have time for this crap. Drop it !”
Bad Axe: “He — he’s the enemy ! He’s — okay, okay — look — I’ll let him go.”
Dragon: [turns around to continue with his temporary ally] “Come this way. I may need your help.”
Bad Axe [lifts the axe to decapitate anyway]
Dragon: [turns and shoots Bad Axe between the eyes] “I wasn’t kidding.”

Bad Axe is something of a mad slasher and can be inserted just as he is. He would fit as a hired henchman of villains such as Ra’s Al Ghul, the Sensei, Kobra or even for the Cult of the Blood Red Moon. 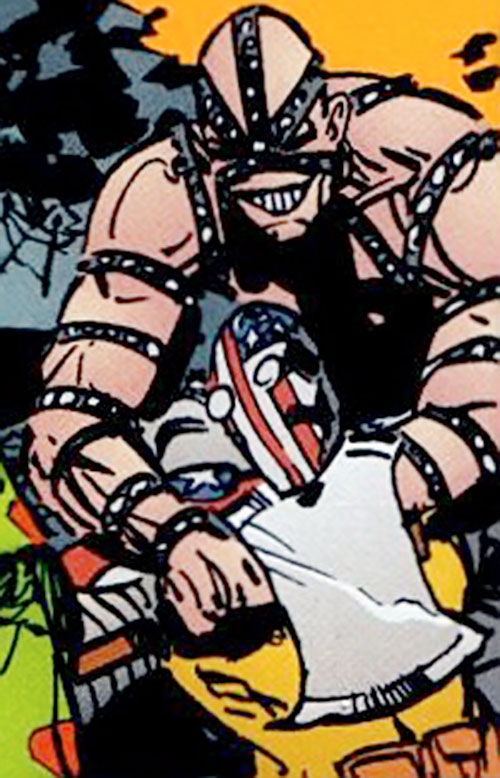 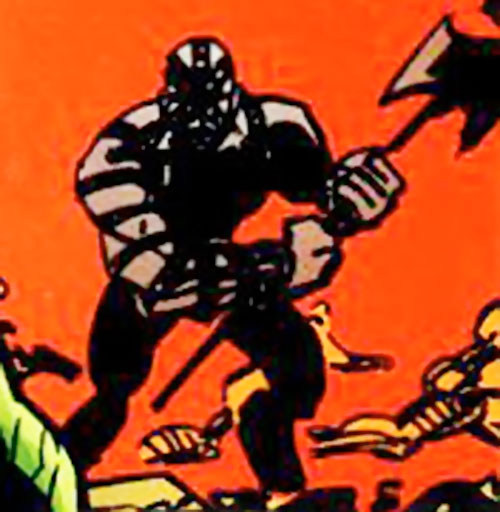