The B.A.D. Girls are a small team in the Marvel Universe, doing none-too-legal mercenary work.

They appeared in 1991, after most of the Serpent Society was arrested.

This isn’t going to be a huge article. Most of their jobs took place off-panelNot directly shown in the comic. Off-screen.. However :

If you have no idea what the Serpent Society is, then you should read their team profile before this one.

This article is a foundation to overhaul individual members’ character profiles. It’ll likely receive small additions as research for these profiles advances.

Full Name:
B.A.D. Girls, Inc.. Though I doubt that they actually, legally are incorporated. Even in a shady tax haven such as Madripoor or Delaware.

It seems that the B.A.D. Girls were an upsell of sorts. For when members heard about a job that was too big to undertake alone.

For a while, they instead focused on investigating the source of member Diamondback’s trauma-induced retirement.

Their abilities also make them skilled at interrogation, breaking & entering, and intel-gathering.

Their beauty can be useful in certain security jobs. Say, to pass for entourage members.

Mamba has presented the team as “private investigators”, but that sounded more like an euphemism for “mercenaries”.

Bases of Operations:
None.

During the early 1990s, the Girls were flagged as friendlies by Captain America. They were even allowed to visit Avengers’ Mansion. This likely lowered the heat from such organisations as S.H.I.E.L.D., through shared databases. 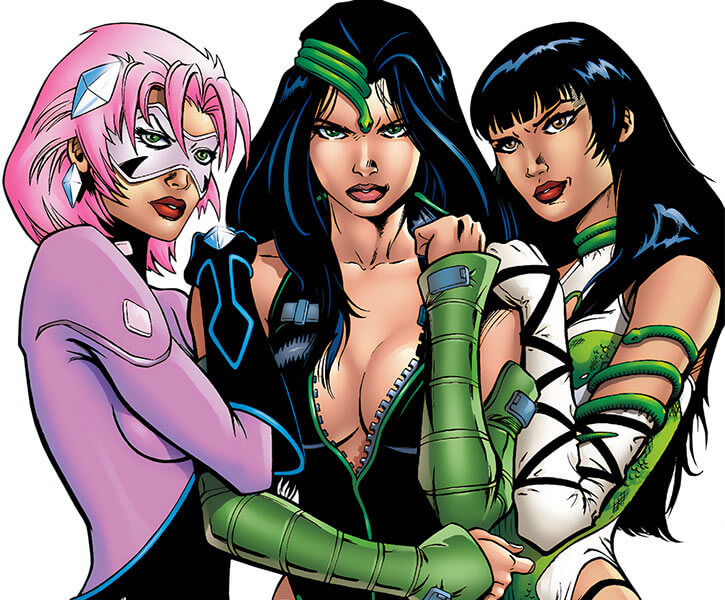 Organizational structure:
Black Mamba (Tanya Sealy) was sort of the leader, being the smartest. But they operated more like a group of friends.

Note:
There are multiple hints that the BAD Girls members extensively cross-trained with each other. That is, they taught each other their field skills and grew in competence together.

During the 1990s, the Girls flew a Mk2 Serpent Saucer. 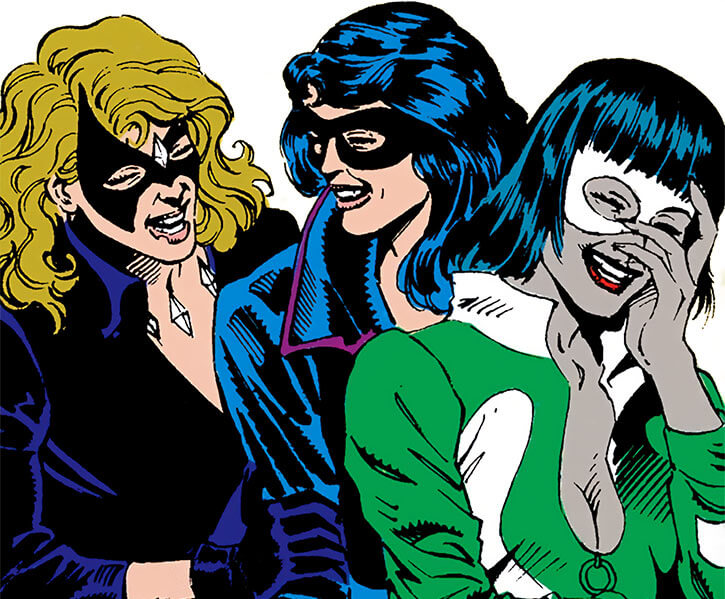 Asp, Black Mamba and Diamondback became close friends soon after the creation of the Serpent Society by Sidewinder.

They also trained together after Captain America (Steve Rogers) defeated them. That fight made it clear that they needed to coordinate better.

However, the three opposed the rest of the Society on two occasions :

The trio hit the mattresses by hiding at Paladin’s place. But this couldn’t last long.

The three decided to stick together. They formed a new mercenary firm, the B.A.D. Girls (for Black Mamba, Asp and Diamondback).

It was meant in part for self-defence, since a few other Serpents had escaped arrest. These were expected to come after the trio for revenge.

They also switched to new costumes for a few years. To avoid being immediately flagged as Serpent Society operatives by the police.

(Likely sources for the costume are Melvin Potter’s boutique, or the Rogues Gallery Costumes shop in Bellingham, WA).

But MODAM (Olinka Barankova) barged in. She abducted the B.A.D. Girls (plus Anaconda) to have them attend a pitch by Superia (Deidre Wentworth) about her Femizons concept.

After agreeing to embark on the luxury cruiser where the pitch would take place, the trio : 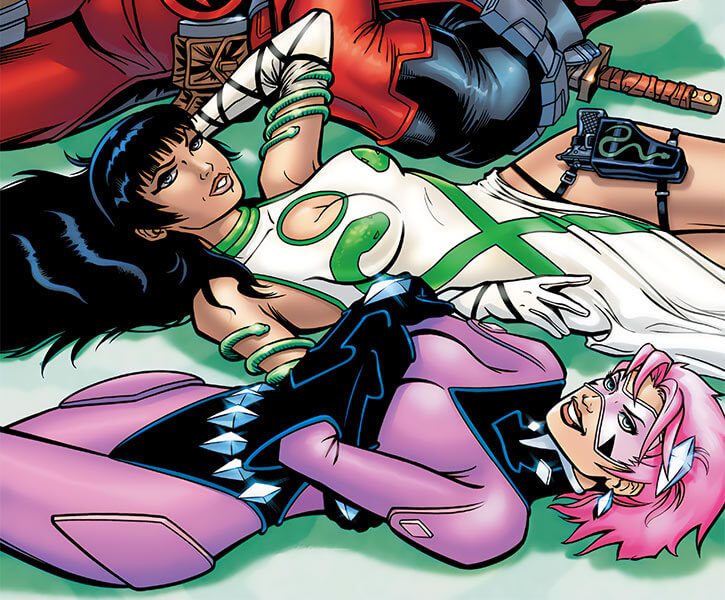 Mamba and Asp received new costumes as a courtesy from the Avengers. The old ones had been destroyed as part of Captain America’s plan against Superia. Presumably, these were quick designs by the Wasp (Janet van Dyne).

(Not her best work, sure, but these still were van Dyne originals.)

However, during the cruise, Diamondback had nearly been killed – in circumstances she refused to talk about. Traumatised, she retired from mercenary and criminal activities.

Trying to help, Mamba probed Diamondback’s mind to determine who had so shocked her. Though Rachel was furious about it, this allowed Tanya and Cleo to start looking for Snapdragon.

The plan was to kill Snapdragon, and bring back proof to Diamondback.

Superia’s open contract got in the way. But while fleeing from an attempt to collect, the pair again stumbled upon Impala. Who agreed to join the team.

The trio broke into the abandoned Serpent Society HQ looking for info. That was a bust, though they found a working Serpent Saucer.

However, Avengers alarms drew in an irate Sersi. She moodily turned the B.A.D. Girls (well, B.A.I. Girls at this point, I guess) into actual snakes. But Mamba smooth-talked her into letting them leave aboard the saucer.

The Girls investigated in Europe, to locate Snapdragon. They eventually found her during the 1993 A.I.M. Weapons Expo trade show, in Boca Caliente. But Snapdragon was now working for Superia, whom the Girls preferred to avoid.

During the expo, Diamondback — now much stronger and back from her retirement — killed Snapdragon in revenge.

Impala seemingly left during this span. She’s been in comic book limboWhen a character still exists, but hasn’t appeared in comics for years since 1993.

By 2001, Diamondback was back to working as a mercenary. It is possible that the trio did jobs together off-panel, but there are no such documented appearances.

In 2004, Asp and Mamba were on the Serpent Society roster. But the Society was arrested as part of a S.H.I.E.L.D. operation involving Diamondback.

One therefore suspects that the BAD Girls had been hired to do covert work, and that Mamba and Asp were providing inside intelligence. If so, no Serpent Society member ever realised this.

She was sexy and serpentine

In 2005, the B.A.D. Girls were hired to steal a hard drive. This case turned messy, as no less than four parties were simultaneously trying to get the drive.

The Girls thus repeatedly clashed with Deadpool. And at one point with Cable (Nathan Summers), Iron Fist (Daniel Rand-K’ai) and Luke Cage.

Skillfully investigating, the BAD Girls eventually found the drive in the hands of the legendary mercenary the Cat (Shen Kuei). But he single-handedly defeated them.

The Girls allied with Cat. And thus ended up helping him to rescue Cable and Deadpool from Black Box and an army of clones.

They also learned that their anonymous client had been Cable all along.

The BAD Girls later joined the ‘Secret Avengers’. That is, the illegal faction supporting Captain America during the Civil War debacleA sudden and ignominious failure; a fiasco. Very little is known about this era.

At one point the BAD Girls were defeated by a trio of official Avengers (Ms. Marvel (Carol Danvers), the Wasp (Janet van Dyne) and the Black Widow (Natalia Romanova)) and arrested.

What they were doing is unrevealed. It seemed to involve a vivarium  full of large snakes. And some sort of goop, perhaps used to safely transport those animals.

(In a few subsequent appearances, the Girls were sometimes seen carrying large constrictor snakes. Perhaps they had been trying to steal enhanced, weaponised snakes – and did obtain a few to help them in the field ?)

But they did not stay incarcerated for long, being soon spotted at a Bar With No Name. This release may have been the result of a deal with the government, since Diamondback was soon drafted into the Initiative Project.

She, Mamba, Asp and two newcomers (Skein (Sybil Dvorak) and Quicksand) formed the Women Warriors. These were detailed to Delaware.

The latter was a disaster that broke the Osborn regime. The B.A.D. Girls presumably ran to avoid getting caught in the fallout. 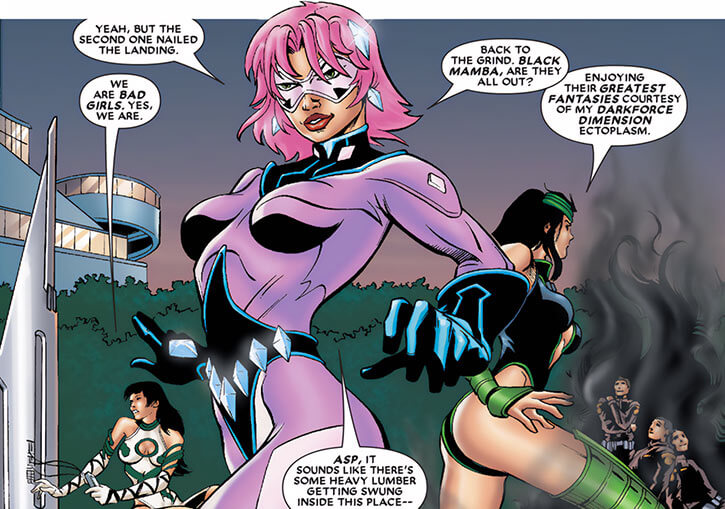 According to Diamondback, the market for semi-ethical mercenaries never was too big. And the competition for that little pie had been heating up to the point where it was best to leave.

By that point the Serpent Society had re-formed as Serpent Solutions, under the leadership of Viper (Jordan Dixon). They were making a snakeload of money, and the former B.A.D. Girls eventually agreed to join.