This profile is part of a chronological series, and as always these should be read in order. The series goes :

Past the first two profiles, there are many of your Earth S P O I L E R S.

During this era, Jet finds a magical tome  that teaches her to act and speak more confidently to impress people. This and other experiences are starting to bring her enormous potential presence into play.

Foundling will normally take point in a fight. Against manageable odds, it’s common for Jet alone to advance as everybody else opens up with ranged weapons. The advantage is that arrows and sling bullets can start flying immediately, without having to get into melee range.

If possible she’ll hold the enemy at some chokepoint while the troops focus their fire to work through the opposition. Depending upon how much space needs to be controlled Khalid, Minsc and Jaheira (in that order) will switch to melee to form a rank.

Jet operates as super-heavy infantry with plate mail or heavier, tower shield, full helmet, heavy gauntlets and sabatons, etc.. She wields a one-handed footman’s flail, usually of the “spiked ball on a chain” sort. The tower shield is heavily reinforced, and stops most crossbow bolts.

During this era, Minsc offers to train Ms. Foundling in dual-wielding flails. Though Jet is sceptical about how it could even work, she turns out to be a dab hand at it. Still, at this stage going flail-and-shield is tactically more sound.

During her adventures Jet acquires a +1, then a +2 flail. The +2 one is different design. The chain is shorter, and the business end isn’t a spiky metal ball but a thick steel truncheon with longer, meaner spikes.

During this era, Ms. Foundling’s nightmares start seeping around her considerable defenses. She can even remember a few of them in detail. There’s also a recurrent voice talking in these dreams.

During the most virulent nightmares, magical abilities awaken within Jet. For now this has endowed her with a minor, but useful healing touch.

The audial mood board for Jet had a fair bit of classic Iron Maiden . Because when you have a gigantic warrior maiden with eyes of fire and full plate armour, who dual-wields heavy spiked flails, you know yoü’re in a heavÿ metal albüm cover.

But let’s get a bit more recent with mood music by Skinflint , a heavy metal band from Botswana. They are firmly in the tradition of NWOBHM  and classic thrash metal, but with a successful fusion of Southern-end-of-Africa motifs. The production is inexpensive and could use a better singer, but it’s got heart and the riffs are great.

(This starts *right* where the previous entry ended.)

Continuing South, the party crossed the border into Amn and reached Nashkel. The Mayor was expecting Jaheira and briefed her.

Before the party could start investigating the mines, they ran into a strange, huge, bald warrior named Minsc. He confusedly explained that he was the bodyguard for a witch, who had been captured by gnolls. Minsc further stated that he and the sorceress Dynaheir were, quote, “butt-kickers for goodness”, end quote.

Enlisting a strongman and one of the dreaded Witches of Rashemen before investigating the reportedly demon-infested mines near Nashkel sounded sensible. However, the expedition to find the gnoll fortress turned out to be a harsh one. It brought attacks from ogre berserkers, gangs of bandits with poison arrows, huge bears, hordes of small evil creatures called xvarts , etc..

Yet the gnoll stronghold was stormed and Dynaheir freed. As repayment, the witch joined the team along with Minsc (and Minsc’s pet hamster Boo).

Just South of the border

Nashkel was in disarray. The iron crisis and resulting highway banditry had hit the town hard. Many miners had been killed whilst working. Furthermore, locals had gone missing in sinister circumstances. 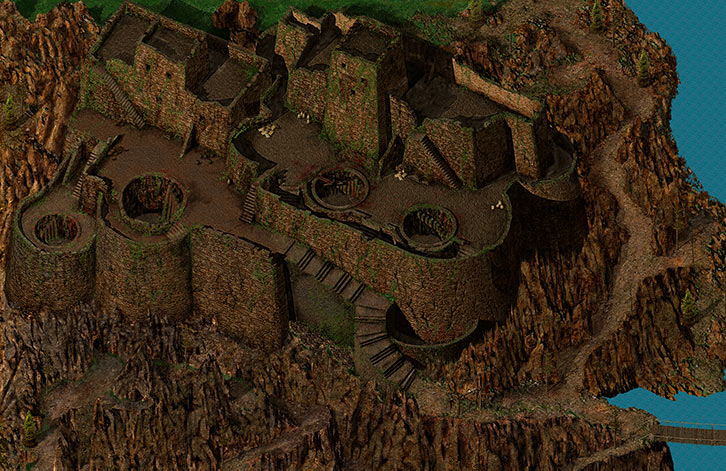 The gnoll-occupied stronghold, which is very brown. Click for a larger version.

Whilst based in Nahskel, the Foundling party :

(Some of these events actually occurred days of travel away from Nashkel. Here we underplay that. That’s the usual “the main quest is urgent, but you are much better off doing all possible sidequest and encounters first” video game problem.)

The games of the Iron Throne

The mines were “haunted”… by mere kobolds . After so much preparation and precautions, that came as an anti-climax.

However, the little creatures were well-equipped, well-trained, well-organised and carried bottles of an odd liquid. This liquid was what they poured onto mined iron ore to make it brittle.

Forging downward, Jet and her team found the kobolds’ boss, a half-orc named Mulahey. Jet had to kill him after he feigned surrender to summon even more skeletons and kobolds. Several letters were found within his abode.

As Jet gloomily suspected, things were about to get worse.

Jet’s full plate armour is a dull medium grey in colour. Imoen felt that the original shiny finish was too easy to spot. 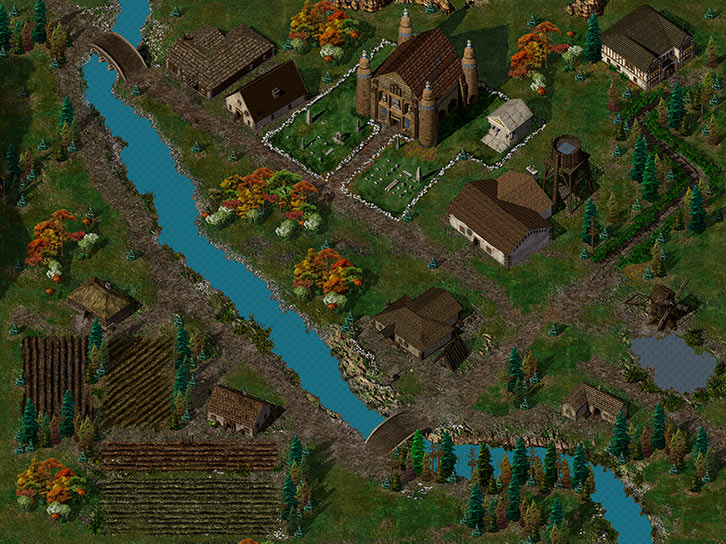 Foundling no longer wears her robes once she upgrades to a full plate. However, there’s a huge, dark red, hooded coat thrown over her shoulders. It serves the same function. She occasionally wears a long, heavy skirt in the same tones over her armour.

The big armour is completed by a tower shield, a big flail and a big helmet.

Jet previously had a slim physique with whipcord muscle, but she is starting to bulk up. And unexpectedly, she’s *still* growing up. During this era, she breaks the two-metres-tall threshold.

Reading the magical book increasing charisma is another stage in Jet shrugging off her teenage insecurities and awkwardness. That, and the slow realisation that her sheer physical power isn’t just a source of embarrassment.

The whole process is gradual, though. The party is constantly travelling, frequently camping in the wilds, sees a *lot* of fighting, etc.. It’s really not the best for self-reflection.

Imoen: “You mutton-mongering (hic) riff-raff ! You think you’re so tough uh ? I bet my (hic) big sister can take you on ! JJEEEEEETTT !!!”
Jet (rising to her full height so as to spot Imoen over the tavern crowd): “Uh ? Imoen ? Is there trouble ?”
Minsc: “AH !! The maiden is mighty indeed ! Taller than even Minsc ! This bout of arm-wrestling shall be legendary among men ! And hamsters !”
Imoen (dragging Jet by her robes): “C’mon c’mon show him ! Teach (hic) him a lesson Jet !”
Jet: “But… but… I don’t want to… I mean… I don’t… Imoen, you’re drunk !”
Minsc (clearing the table with one sweep of his hand, then putting his forearm in position with a loud thump as the tankards crash on the floor): “Arm-wrestling clash of the titans, and titanesses ! We shall have two referees ! Boo the just and fair shall watch the right ! Your tiny sibling shall watch the left !”
Imoen: “I AM. NOT. (hic) TINY !!”
Jet: “Is… is that a hamster ?”

Minsc: “Dynaheir ! We have come !”
Jet (leaping down the pit where Dynaheir is held) “Madam, can you move ?”
Dynaheir: (Exhausted gesture at a chain and manacle around her ankle).
Jet: “I need better light to remove that. And we have to assume gnoll reinforcements are on their way.” (crouches near the wall, grabs the chain) — KRRRR-NNNK ! — (Jet tears the steel chain free from the stone wall, then casually rips the 9″ nails clear from the steel plate). 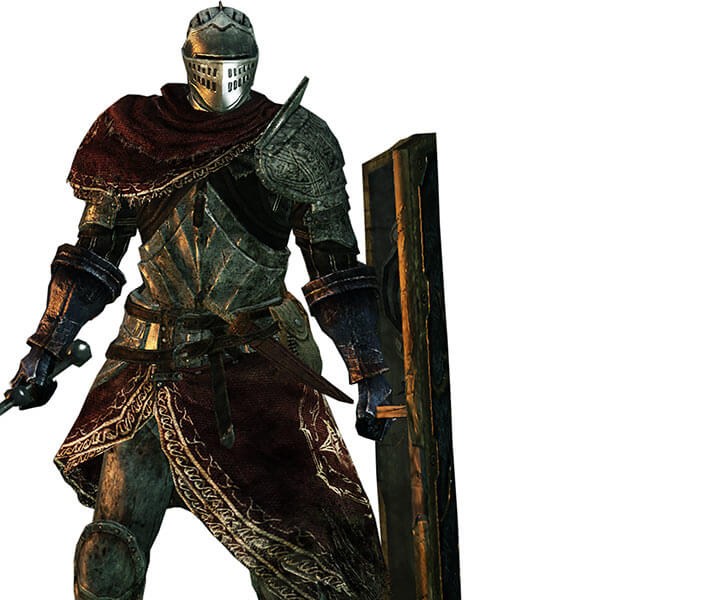 This is a modified DS2 Faraam armour, using textures by EvilDeadAsh34 . Click on the image for a larger version.