Prepare to be immersed into a world of intrigue and mystery on a perilous quest to rescue a storied land from an impending war.
– A blurb on my copy of BG1 (the brown folding cardboard release).

Launched in 1998, Baldur’s Gate (“BG1”) was a landmark computer RPG. It and BG2 were an important step forward for Dungeons & Dragons-style computer role-playing games in the West.

That was doubly true for tabletop RPG fans, since it used the Advanced Dungeons & Dragons 2nd edition rules. It also was firmly set in the main D&D setting, the Forgotten Realms. Yay !

The game would have two sequels, an overhauled edition, spin-offs, etc.. Years later it would also have spiritual successors such as the Pillars of Eternity games.

Furthermore, many features invented for BG1 and BG2 continued evolving in later, major games by the same studio. Such as Mass Effect or Dragon Age.

This article was written before the Baldur’s Gate III project from Larian started releasing. So the only BG3 bit in the article is the header illustration, since it’s nicely generic.

If you’ve read, say, our Fallout material you know the drill.

In BG1, the generic Player CharacterRPG characters played by a player, rather than the gamemaster or the computer.is often nicknamed CHARNAME after their placeholder string, or called “Gorion’s ward”. Each player creates their own version.

There sort of exists a canon version of CHARNAME, named Abdel Adrian  . But he’s… not necessarily popular. Except perhaps for those who read the books before playing the games. Those folks are welcome to submit a profile for him. 😺

Jet is much cooler, and she’s about right to give the story a bit of texture without overdoing it.

The profiles are based on the Enhanced Edition of the games, on the Core Rules difficulty.

For BG1, we use a modding suite close to the Recommended selection in the Big World installer  .

This involves some additional quests, lots of additional BG2-style intra-party banter, bug fixes, AI improvement, rebalancing of screwy bits, etc.. But all this stuff is lore-legalOriginal story elements that are 100% compatible with the established elements of a fictional world. and doesn’t change the game in major ways.

Thus, for the purposes of our profiles — particularly the party’s profiles — it is considered canon. Without it the characters have markedly less texture. The Bioware approach was still being invented back then. 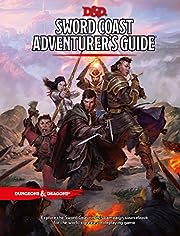 The Forgotten Realms (or just “the Realms”) are the best-known setting for Dungeons & Dragons games. This success is tied to one of the popularity peaks of D&D, during the 1990s.

Many of the D&D-based novels and video games back then, such as Drizzt Do’Urden  ’s adventures or the Baldur’s Gate computer role-playing games, took place there.

The Realms were conceived during the 1960s as a made-up childhood fantasy world. But they started being reimagined as a tabletop role-playing world early on, in 1975.

Their creator Ed Greenwood  wrote a bunch of popular articles about them for Dragon Magazine. A decade later they became an official D&D setting.

As a child of the 1960s, the Realms are grounded in the Middle-Earth-and-Narnia paradigm. This is also the assumed kind of setting of early Dungeons & Dragons material, and from there the default notion of a heroic fantasy environment.

Thus, the Realmq are generic enough for people to grasp. There are wizards and elves and dragons and knights and dwarves and castles and swords and halflings and dark forests and all that good stuff.

Yet there’s enough room for more original setting elements. And the sheer amount of material allows for a mythology of its own.

For instance, the Realms have generally Tolkienesque elves. But there are a number of ethnicities, cultures, kingdoms, alphabets, histories, legends, etc. among these Elves.

The setting is sufficiently well-established that some of its original elements have since become “generic heroic fantasy” clichés. Especially since it was so often seen as *the* D&D setting, and D&D played a major role in shaping fantasy story genres.

The Realms are part of what would later be known as the “map fantasy” genre. This refers to the hand-drawn maps often found at the beginning of early heroic fantasy novels, as imitation of Tolkien’s.

Back then these pictures evoked unknown, fantastic lands and strange creatures. The commoditization came later.

The Baldur’s Gate story takes place on the best-known Realms continent, Faerûn. Faerûn is significantly larger than the continental USA.

The plot takes place on Faerûn’s central West Coast, which is part of a region called the Sword Coast.

“Baldur’s Gate” is actually the name of the major city in the area. It is a huge trading port. But the action starts about 100 miles (160 km) to the South, within the distinctive walls of Candlekeep.

Candlekeep is a combination fortress and library, run by monks called the Avowed. 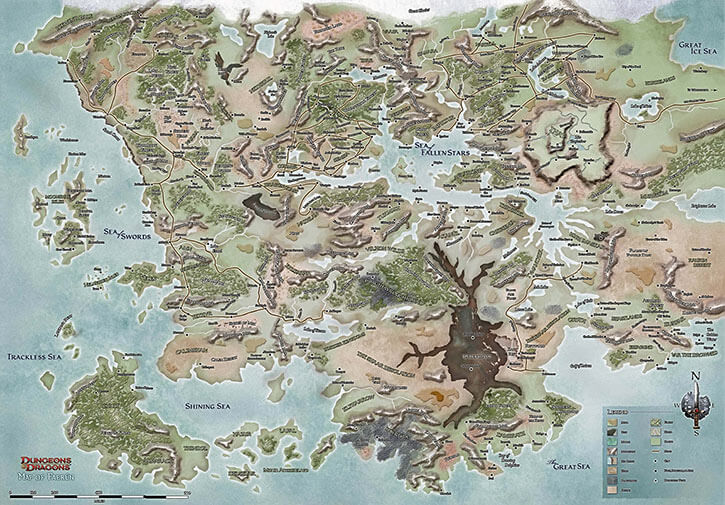 Faerûn. The Baldur’s Gate area is a bit North of the “Sea of Swords” words.

Candlekeep is a famous, prestigious place. It is *the* largest library in all of Faerûn, and perhaps the entire Realms.

This is a big deal in a fantasy milieu, where arcane secrets and ancient histories often hold power. And this is even more true in the Realms, a setting with a notable emphasis on sages and books.

A place most unique

Architecturally, Candlekeep is a wonder. The illustration below is a faithful depiction. It does stand tall on a volcanic crag battered by the waves. The towers are gigantic. It has gardens, baths, inns, temples, vast underground storage, etc..

The security is almost as impressive, with an entrance check that evokes an airlock.

To gain entrance is a complex endeavour. One must manage to bring at least one book that the monks do not have, and will add to their collection. Some people such as the sage Gorion (CHARNAME’s adoptive father) are “Friends Of Candlekeep” and can come and go as they see fit.

The vast majority of visitors will not be allowed to progress past the Court of Air. This is the ring between the outermost walls and the main inner walls. The books sought by the authorised visitors are brought from within to secured reading rooms along the Court of Air.

The Keep is also a major actor in book-copying, book restoration (sometimes using magic), translation, illumination, rebinding, spells cataloguing, etc.. Furthermore, it is a well-regarded publisher of academic studies drawing from the works held within its libraries. 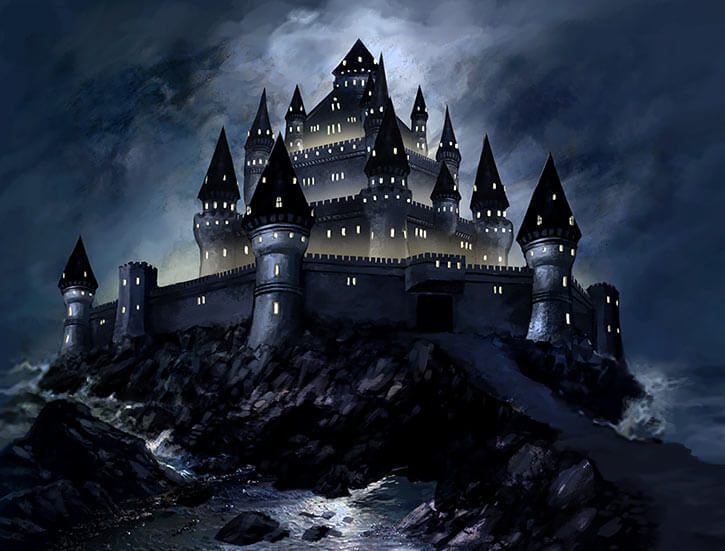 I sing the matters linguistic

The Forgotten Realms have a variety of languages. It changes by region, culture, race and ethnicity.

However, there exists a trade language, called the common tongue or simply Common.

This lingua francaLanguage used as a common language between speakers whose native languages are different. is simple to learn. Thus, a lot of people can at least get by in Common. On the other hand it has a small vocabulary, little grammatical nuance, and is a language without a culture or arts.

In character writeups, Common is assumed. *Not* speaking Common would be a Drawback.

Jet and Imoen grew up on the central Sword Coast, so we can assume Thorasta is their mother tongue.

The texts aren’t entirely clear. But it would seem that Thorasta is the modern offshoot of Thorass (an almost dead language, like Latin) upon which Common is based. So it is probably a living, fuller, culturally grounded version of Common.

This makes it easy for Thorasta speakers to talk with strangers. It *might* be like being Hispanophone while Common is like Esperanto  . If Esperanto was even more closely based on Spanish.

Thorasta is written using the Thorass alphabet, which many other languages also use. This is much like the Latin alphabet gets used for a broad variety of European languages.

As one goes North and past Baldur’s Gate, Illuskan starts being the primary language – rather than Thorasta.

And as one goes South and into Amn, it’s Chondathan that takes over. Though technically, the official language of Amn remains Thorass.