Taoism Drunkard (or maybe Shaolin Drunkard, or Drunken Wu-Tang, or whatever) was a 1983 kung fu comedy, or “comedy”. It had a peculiar atmosphere and effects, and you shouldn’t worry about the movie being too highbrow.

There’s a monster in it. The monster’s name depends on whether or not one is watching the original version (Banana) or the dub (Watermelon).

The Banana Monster appears to be made entirely out of metal, and is virtually indestructible. Even spending Hero Points , Old Devil (the most powerful martial artist in the movie) was unable to dent it in the slightest.

It’s much, much faster than it looks, and extremely agile.

It has two long tentacles. The ends of these are sensitive enough to tell whether or not someone is male or female, even through an extremely good disguise.

Most fearsome, given its preferred technique, is its mouthful of jagged, metallic teeth.

The Banana Monster has somehow been wrangled into guarding the Sacred Writ, a document held by a clan of spiritualists in China.

He first appears when the clan’s heir must pass through a series of trials and take the Sacred Writ in order to ascend. The kid makes it through the first two trials using his wits and agility. But he is defeated by the indefatigable Banana Monster, and has to be bailed out by his grandmother.

Later in the movie, Old/Starry Devil, a criminal who was executed for stealing the Sacred Writ, but came back to life to seek it once more, attacks the spiritualists in order to steal it. Tricked into entering the trial chamber, he tears through the first two trials using brute power. But that proves ineffectual against the Banana Monster. Stymied, Old Devil retreated, promising to return.

Afterwards, it seemed like he returned, and battled the Banana Monster briefly. But it turned out to be a disguised female cohort of Old Devil. The Monster went back to sleep after feeling her gender, allowing her to steal the writ.

A demonic cannonball with huge, chattering teeth, glowing yellow eyes, tiny legs, and thin metallic tentacles that have suckers on the ends. It also has Chinese characters painted on his back in red.

It speaks in a high-pitched jabbering, mocking voice. If it’s actually meant to be saying something, it’s not subtitled.

It’s uncertain what gender the Monster is, or even if it has one. I’m not getting close enough to check.

The Banana Monster relentlessly protects the Sacred Writ from any man who would claim it for his own. It always, always aims, er, just below the waist, which tends to be quite frightening, and does not stop attacking until its prey either escapes or gets eaten, starting between the legs.

Attempting to immobilize it by trapping its legs just results in it grabbing something with one of its tendrils and flinging itself at its target.

It does not, however, attack women. One of the Monster’s early actions in combat is to feel whether or not its opponent is male or female. Once it’s determined an invader is a woman, it goes back into dormancy.

The Banana Monster possess a child-like, malevolent intelligence, and dances about chattering excitedly when it sees a target. It’s uncertain whether or not it’s eagerness to attack derives from an earnest desire to protect the Writ, or sheer bloodthirstiness.

Make it the mascot of the Great Ten.

Anywhere on Earth there is a sacred item, there could well be a Banana Monster protecting it.

Banana Monster (aka the Watermelon Monster) 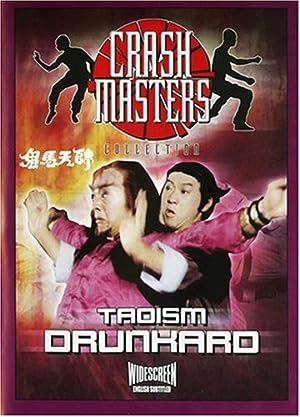 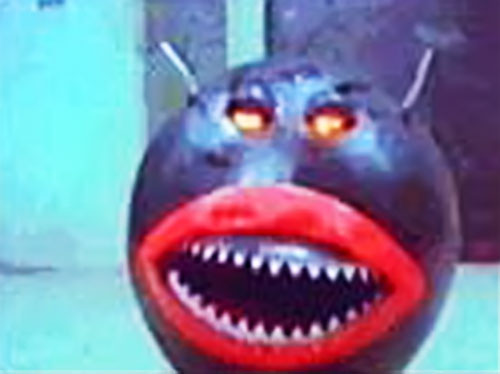 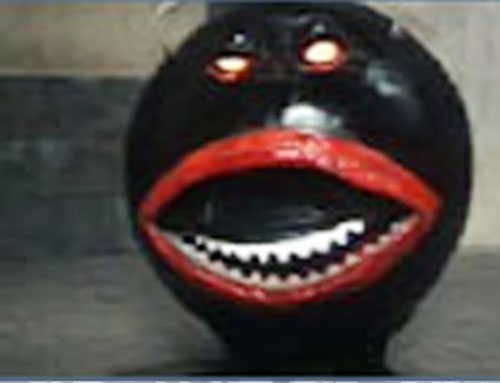