Physically powerful, Bane’s strength borders on the super-human. He’s a very skilled fighter, able to hold his own even against super-human opponents.

He’s sworn off using the Venom drug, except in the most extreme circumstances. But long use appears to have had a lasting effect on him, as he’s still able to ignore a fair amount of damage. He still carries a few capsules around with him.

Highly intelligent, Ra’s al Ghul described Bane as having a mind equal to the greatest he has known. A superb strategist and tactician, he’s reputed to have taught himself various scientific disciplines while in prison. Bane knows six active languages and at least two dead one (these include Spanish, English, Urdu, Persian and Latin).

He also has a photographic memory and was able to deduce Batman’s identity within a year. His disciplined mind has also proved resistant to telepathy, able to think something so quickly even the Martian Manhunter has proven unable to read his mind.

A new recruit to the team, Bane was seemingly content to follow the others. However he occasionally commented on their lack of professionalism, and showed concern for Scandal’s wellbeing (she was grieving over the death of her lover).

Kidnapped by Junior, he was tortured by having bricks thrown at him. Bane showed no signs of breaking by the time the Six rescued him, although he promptly collapsed, and was unconscious for the rest of their trip to Gotham.

He only roused when Scandal was in danger, taking Venom to allow himself to rescue her.

His obsession with prisons showed itself. But Bane nevertheless joined the faction of the team trying to free the Amazons, viewing Smyth’s prison as being an abomination. 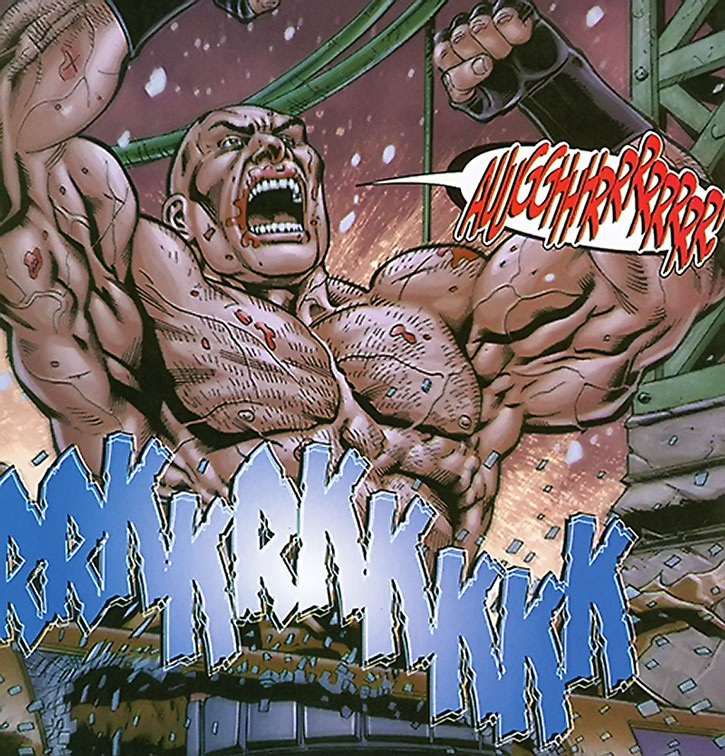 Following the mission he usurped control of the team, supported by Jeanette. He was determined to make them more disciplined. Bane took Scandal off the field team until he believed she was ready (possibly concern over her having used Venom to aid her fighting Grendel).

Cats in the Cradle

When Catman took off to find his son, Bane believed it nothing to do with the team. He saw their duty as performing the job they’d already been contracted for.

When most of the others went after Catman, Bane and Jeanette hired another four temporary members for the team and performed the job.

Seeing Skartaris  as an anarchic mess, Bane accepted their forced mission as a means of bringing order to the place. His sheer force of personality soon made the rebellious tribe take him as their leader.

Having to face Scandal in combat, he used her Lamentation Blades to cut his own throat rather than risk harming her. But a local healer fixed him up quickly, and he led the attack on the capitol.

He only stopped when Alice convinced them further fighting would only devastate Skartaris.

Bane was truly shaken by the revelation he was destined for Hell. He believed that he’d always live a righteous life.

It seemed to shake him out of whatever state he’d been in, and he realised that Batman had truly won the contest between them.

Caution to the Wind

Deciding he could no longer continue as he was, Bane chose to renew his war with Batman. At least he wanted to disentangle himself from the team, viewing his relationship with them as being an impediment to his plans. He also reversed his decision about using Venom.

Targeting Batman’s allies, Bane was undisturbed when they were discovered before they could act. He led the team against unbeatable odds. At peace with his decision, Bane broke free from the transport as soon as he was in custody, determined to resume his path to power.

Stern and calmly imposing, Bane is extremely disciplined. He expects a similar degree of professionalism from those around him. However he’s come to grudgingly accept that as being hard to find, and makes allowances for other’s shortcomings. For himself he prefers a regimented existence.

His desire for order and discipline is undoubtedly tied into his fascination with prisons, and his regimented upbringing. While he doesn’t necessarily like them, or the idea of people being imprisoned, he occasionally displays a longing for the more orderly lifestyle imprisonment offers. 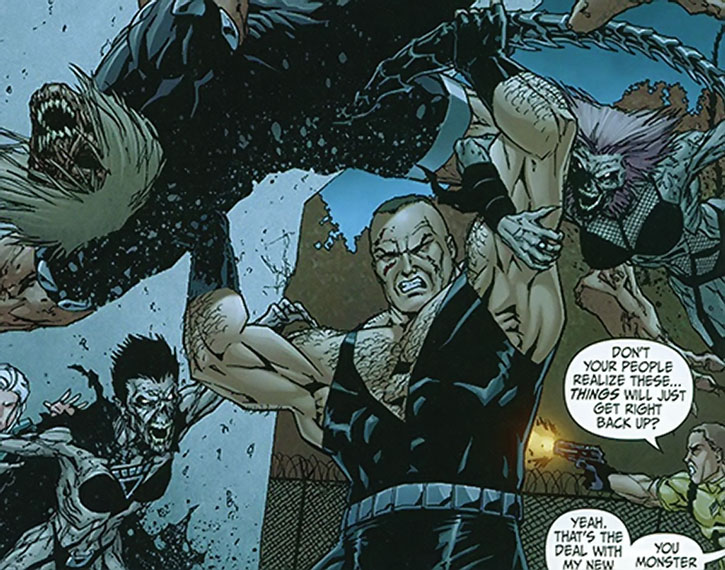 Despite his determination to never again use Venom, he carries a few vials with him at all times. This may be to test his resolve, or a part of his addiction he just can’t shake off, but it’s not clear whether he even knows for sure.

The only time he allowed himself to use it was when Scandal was in serious danger, and he showed serious remorse about doing so later (possibly Guilt level, in DC Heroes RPG terms).

He’s developed a kind of paternal affection for Scandal Savage, which she seems to have allowed. He gets protective of her, both in combat and outside of it. For instance Bane has concerns about her sleep pattern and diet, intrusively questions her dates, etc.

Following the revelation that he was damned to Hell, Bane began to recover his earlier determination. He came to understand the feelings he had developed left his self-control compromised. He chose to cut himself off, to return to being what he had been, and to resume his path to winning an empire.

“I don’t care for prisons. They make poor nurseries.”

“This is wrong. We should not harass a prisoner. It is unseemly.”

“It is the nature of everything. Consequences must be paid.”

Regan: “If you don’t mind me saying, can I ask what you bench press, sir ?”
Bane: “… Costumed detectives, mostly.”

“I have only one rule in dealing with the enemy. Give them nothing. Not solace, not mercy, not kindness, not torment, not provisions, and most assuredly — not satisfaction.”

“I am not a creature given to irony. But as each new brick peels away my flesh… I am uncovered less and less. I stand unrevealed before my enemies and my God. They’ll see my organs before they see my soul.”

Catman: “You’re bleeding out, by the way.”
Bane: “Not without my permission.”

[After Scandal is shot] “How dare you. How dare you, you insignificant pustule of vomit and bile ? You maggot-infested trough of a diseased hog’s dinner !” [Rips thug’s arm off and beats him to death with it]

“Should you even speak to her harshly… I will show you a pain that will unmake you.”

Bane: “I had a dream of a cell with doors like this.”
Jeanette: “We had doors like this in Kilmainham gaol. We were never allowed to speak, not ever. Not even to ourselves. They wanted us to reflect on God in every waking moment. The eye-shape is meant to be the eye of the Lord, watching us even in sleep.”
Bane: “’The Eye of the Lord‘. The captivity. The security and routine. It must have been glorious.”

Black Alice: “I think I’m getting it. Enemies become allies and death is everyone’s dance partner.”
Bane: “I would not put it so cheerily.”

“Please put your weapons down. If you wish to live, I mean.”

[On his first date, holding out flowers and chocolate] “I wish to mate. Here are bargaining tokens they told me to purchase. Shall we begin negotiations ?”

Bane: “My mother was imprisoned, for the crimes and debts of my father, who was beyond the law at that time, in a jail [in] Santa Prisca. I was born in the prison, one of the worst anywhere on the planet, I’m told. I was whelped among killers and madmen. I played with the rats. I took my first human life at nine. My mother died, an innocent, in that filthy pit. They gave her body to the sharks. I learned how to survive, and how to conquer men. Every man who stood against me died, no matter how small the infraction. I came to Gotham as an adult, to break the Batman. So I beat him. I did what no other could. Not Luthor, to those loathsome psychopaths in Arkham. And when he was beaten, I snapped his spine over my knee in a joyful sound that I have dreamt of every night since.”
Spencer: “But he got better, right ?”
Bane: “Yes. He got better. And I got worse.”

Bane: “It was made clear to me in Hell that regardless of the life of honor and excellence I have led, I will spend eternity there with the scum and the filth. People like you, Blake.”
Catman: “The Catholics might say you have an option, there.”
Bane: “Better an eternity in Hell than to voluntarily bend a knee to anyone or anything.”

“It is the nature of plans involving others. They are flawed because humans are flawed. I will miss the antics of my foolish associates. Especially the girl. But I cannot be Bane with them attached to me. The authorities think they have won. But my plan left no room for error. Either I conquered my enemy, or I was set free of all human encumbrances. Even the girl. It was caring. It was emotion that made me weak. And now I am free of it, as I planned all along. Goodbye, Scandal Savage.”

The product of an attempt to reproduce the super-soldier formula which created Captain America, Bane fought him a few times, attempting to prove his superiority.

Drawbacks:
Distinct Appearance, MIA (Not using Venom), MIA (Protect Scandal), Minor Rage (when using Venom), Miscellaneous Drawback (He still has a bomb implanted in his head from his time with the Suicide Squad).

No longer using Venom regularly, his DEX and some of his skill levels have dropped. While I’ve tried to keep the stuff in line with the earlier entries, there are differences in how he’s portrayed. 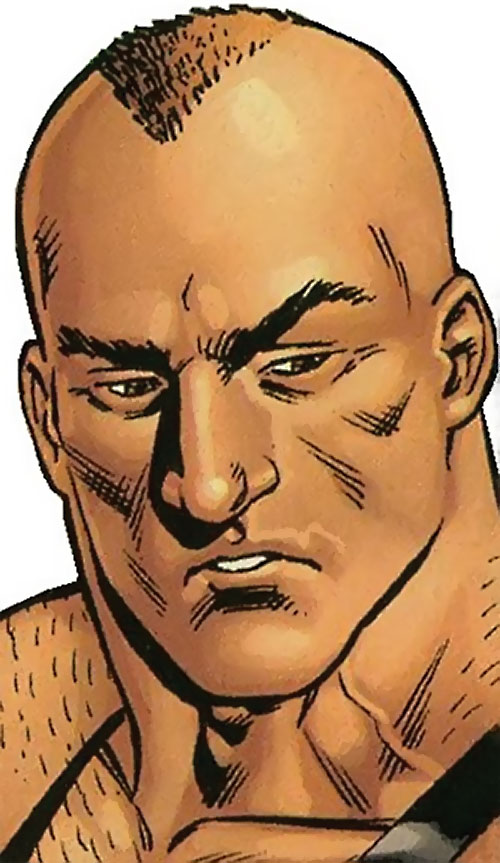 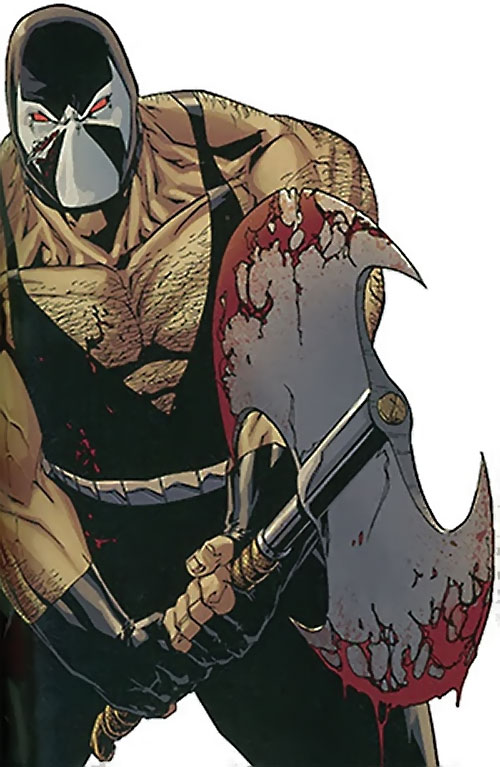 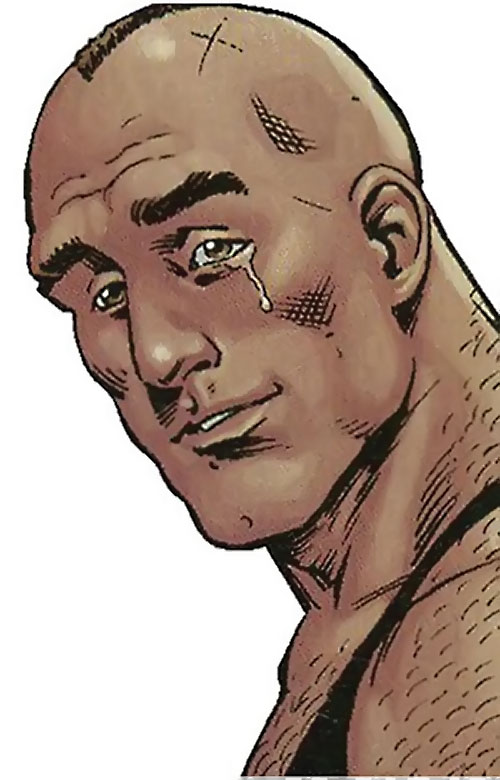 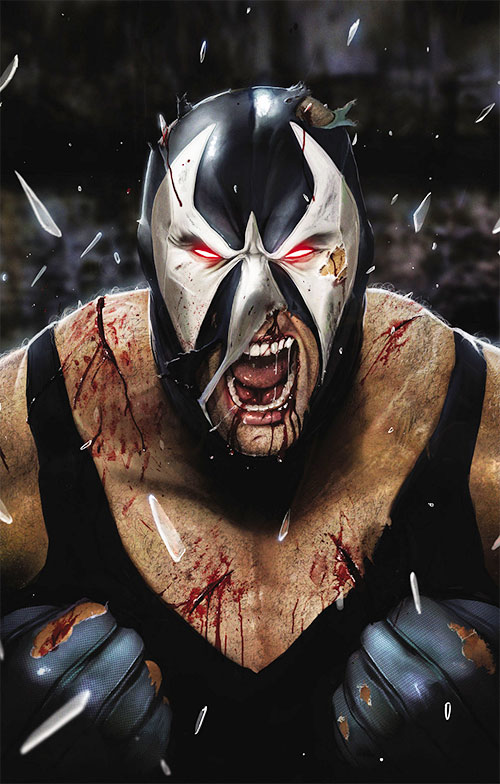