The Banner proved to be a skilled combatant and terrorist, fast and robust.

He was able to put two bullets in Batman (Bruce Wayne)’s brow at close range, and can shoot a M60 from the hip. Though in DC Heroes RPG terms he takes a -1CS penalty to AV, since he is one AP below Rec. STR.

His return fire was more accurate than the shots from Federal snipers with scoped assault rifles.

The Banner presents himself as an All-American small business owner. He decided to stay behind during No Man’s Land so that he and other well-meaning citizens could prove what they could do. Needless to say, the experience left him very bitter. He came to hate the Federal government for having abandoned Gotham.

When the reconstruction of Gotham started, it included a state-of-the-art Federal building. This being post-9/11, it was heavily fortified and defended. The Banner decided to blow it up, and put up posters on the doors of the building warning the occupants.

His plan included an elaborate feint. He hijacked a subway train, loaded it with barrels connected to detonators, and sent it careening toward the station under the building. Special Agent Leary, the overconfident but courageous head of security, managed to board the train. But she discovered that the barrels were empty.

Meanwhile, the Banner had commandeered a crane near the building. He was swinging a pallet loaded with tons of explosives toward the building. Batman tried to take him down, but the Banner managed to hold him back.

Nevertheless, the combination of Batman and Agent Leary’s efforts ensured the detonation of the barrels near the crane and not against the building.

The badly wounded Banner then returned to his militia’s headquarter for another speech to his faithful supporters. But it was then revealed that the deluded Banner’s conference room was full of dummies in uniform, and their chant was just a tape recorder.

Standard militia terrorist type. The Banner was smart enough to plan intricate attacks with feints, and proved pretty good at implementing them. Unlike Agent Leary, though, he actually lost it when he was certain he would die.

“This abomination was built with the blood of American taxpayers. All who labour within to debase the bill of rights do so at their own peril. You have been warned.”

The Banner : “Was Jefferson  mad ? He said, ‘The tree of liberty must be watered frequently with the blood of patriots.’”
Batman : “He was referring to voluntary sacrifice, you fool !”

“An entire generation of Americans has been corrupted and spoiled by a wrong-headed Federal government that is itself corrupted and debased !” 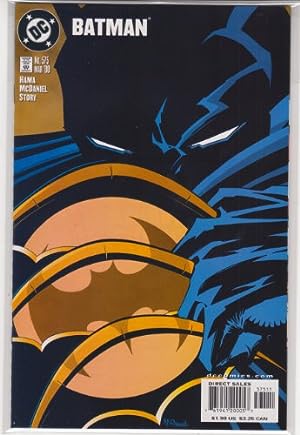