Back to the movie… back in my early college days a friend of mine told me a little about this old Sci-Fi movie Barbarella, saying she crash landed her spacecraft on this planet and had super strength, she lifted the space craft on her own. Also, there was an angel in the story, energy weapons, etc. Sounded like your basic Sci-Fi story.

About two years ago I noticed a gaming buddy of mine had Barbarella in VHS format in his collection. I began to believe that I had missed out on a gamer classic…I bought the movie and found it is much different than what I expected. Still here she is… with S P O I L E R S, I suppose.

Barbarella is apparently one of the best agents the Earth has to offer in the 41st Century. She answers directly to the President of Earth himself and is entrusted with the best equipment of her time. She is tasked to take on the most serious and important missions on her own.

Even though Barbarella abhors weapons she is an excellent shot. She is well versed in the use of every weapon in her arsenal. She is also trained to work in zero gravity.

It is likely that beyond Barbarella’s pay, she has access to an enormous budget. For instance, she has offered compensation to those who help her along her way. However, none actually ever took the money as payment.

Barbarella also receives weapons and equipment for her mission via her Atom-transmitter onboard Alphie.

Barbarella uses her looks and sex appeal to gain help with her missions and is very good at gaining trust. When overwhelmed she will likely lie down and cry for help. Barbarella doesn’t spend Hero Points on the first point of damage inflicted on her. This may be to help with her portrayal as the damsel in distress.

The year is 40,000 A.D. Barbarella’s mission is to find a scientist named Durand Durand. When she crash-lands her spacecraft she is quickly captured but is assisted by the Catchman, who freed her and repaired Alphie. Then he tells her to go to the city, SoGo, there she will find Durand Durand. 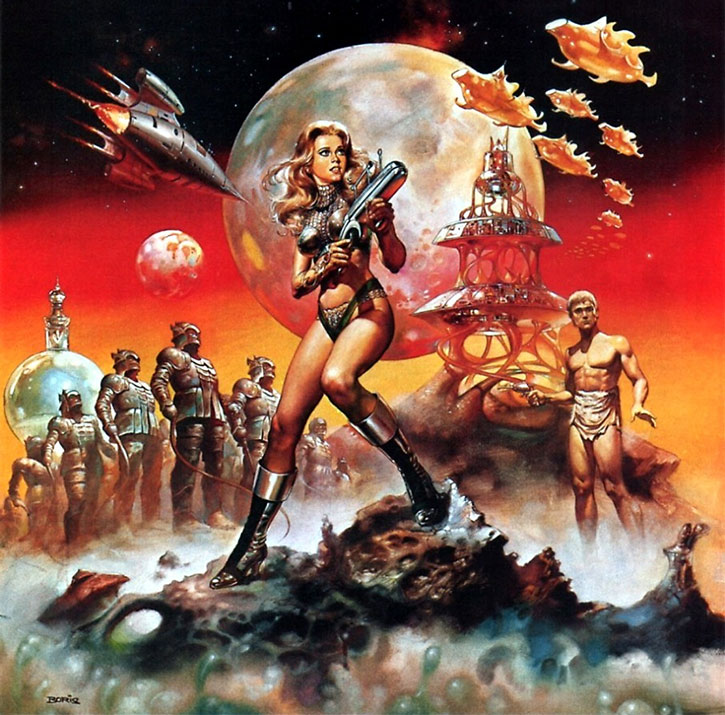 As the Catchman tries to flirt, Barbarella explains that for centuries now on Earth people haven’t been making love unless their psycho cardiogram readings are in perfect alignment. Once matched with a compatible person, the couple take pills (“exaltation transference pellets”). They then put their hands together, palm to palm, until they reach “full rapport” or for one minute.

The Catchman shows her another approach.

Using the Terra-screw, Barbarella travels underground to the Labyrinth of the City of Night. There she gets knocked unconscious by some falling rocks but is found by Pygar, last of the Orninthropes. He has lost the will to fly, but still leads Barbarella to the Labyrinth to speak with Professor Ping.

The Professor (played by the mime Marcel Marceau) explains that SoGo is a city dedicated to evil and all that is not evil is exiled to the Labyrinth. While the Professor works on her space-craft, Barbarella helps motivate Pygar to fly. She eventually wins him over.

Pygar proceeds to fly Barbarella up to the city, SoGo. However they run into Blackguard patrol ships and get shot them down. Pygar almost gets killed, and Barbarella’s energy box feeding her weapons runs dry. Nevertheless, the pair narrowly makes it to the city of SoGo and enters through some kind of access tunnel.

The villainous people of SoGo quickly separate them. They seem about to rape if not murder Barbarella, but our heroine is saved by a mysterious blade-wielding woman. This is the Great Tyrant, who may have been the inspiration for Marvel’s Callisto, leader of the Morlocks.

Barbarella goes back and rescues Pygar from a lynch mob of people. Alas, they promptly end up in a “chamber of ultimate solution”. Either they can be killed by the Mathmos monster under the floor, or they can choose one of three doors – each a different way to die. 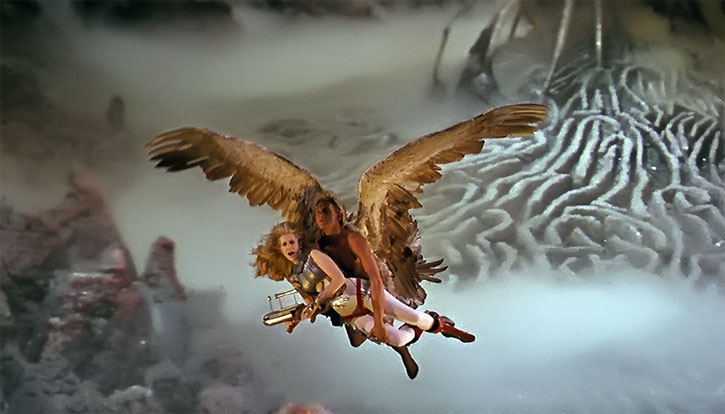 But before having to choose a door Barbarella and Pygar are saved by the Conciliary to the Great Tyrant.

Barbarella learns that Mathmos is named after the living lake of evil goo beneath the city of Sogo. The Mathmos feeds and thrives off negative energy (or evil energy) and flesh. In return it powers the city but it has a terrible appetite.

Pygar is captured in a net. Meanwhile, Barbarella is summoned to have an audience with the Great Tyrant. There, she discovers that Pygar is to be crucified by his wings. Barbarella recovers her energy pistol cunningly concealed in Pygar’s loin cloth and uses it to force the Great Tyrant to release the angel.

However he Conciliar is not fooled – he notices her energy box is depleted. Thus, the order is given to have Barbarella put to death with the birds (a scene reminiscent of classic 1963 movie The Birds). As to Pygar is sentenced to death by the Mathmos for having rejected the Great Tyrant’s advances.

Barbarella begins to succumb to the birds’ attack, but suddenly falls through a trapdoor. She lands in the headquarters of the revolutionary forces, where she meets Dildano.

Dildano needs Barbarella’s weaponry and spacecraft to overthrow the Black Queen. Barbarella does not want to get involved, but she eventually agrees. Cooperating will likely get her closer to completing her mission and finding the scientist Durand Durand.

Dildano contacts Professor Ping. They agree to strike once the Black Queen is in her chamber in the 11th Corridor, where she will be most vulnerable. Barbarella helps by obtaining the invisible 2nd key to this chamber. With the key, she’ll able to enter through the impenetrable invisible wall. 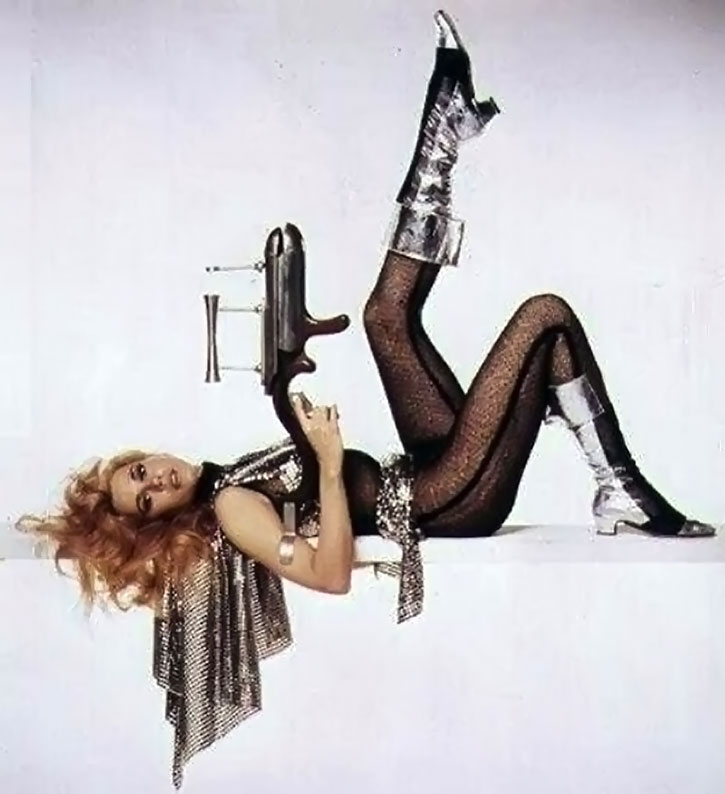 The revolutionaries give her their secret password, then send her on her way through the tube system back into the corridors of SoGo.

Barbarella tries to gather information from a group of stoners and blends in with them to avoid detection. However the sharp-eyed Conciliar recognizes her, and it’s time for yet another death sentence.

Is there something I should know

This time she was put in a torture device, the Excessive (or “Ex-sex-sive”) Machine, which kills through pleasure. Barbarella overloaded the machine, causing it to catch fire.

With the help of the Portable Brain-wave detector Barbarella discovers the Conciliar is actually… the scientist Durand Durand. He has been aged 30 years by the Mathmos and gave himself over to evil.

Durand Durand reveals the truth about the Positronic-Ray and his plan to destroy the Black Queen and take over Sogo. In turn Barbarella reveals that she knows how to get to the Black Queen in her Chamber of dream.

The two journey to the Chamber of dream, crossing the invisible wall with Barbarella’s invisible key. Using both Barbarella’s key and the Queen’s, the treacherous Durand Durand locks the two women within, to be eaten by the Mathmos! Oh no! Can Barbarella escape from this terrible trap?

Barbarella is an attractive young woman. She changes outfits frequently but most are skin tight and somewhat revealing and some have a cape or a tail. Her outfits are easily torn.

Barbarella portrays herself as an innocent air-headed blonde. However, her superiors think enough of her to send her to hostile planets alone to accomplish missions.

Barbarella is friendly towards everyone she meets. When meeting others who do not understand English she will try French before resorting to her tongue-box.

When dealing with aliens who rescue her or help her along her way, she knows most want some kind of compensation which she provides in a James Bond fashion.

It’s not likely Barbarella could be inserted as is. She is from a futuristic Earth. She could arrive from an alternate timeline or another planet; just substitute another home planet for Earth. Barbarella would likely be on some sort of mission. Perhaps the heroes could assist her.

Barbarella could also be someone sent back in time from the 41st century to find some lost knowledge. Perhaps they’ve been reliant on drugs so long for reproduction that they’ve forgotten how to do it naturally… the drug supply becomes scarce and they send her back to become a futuristic Eve.

In Marvel, she could encounter the Shi’ar and/or the Starjammers.

“Screaming ? A good many dramatic situations begin with screaming.”

“Love !” (The common greeting when saluting the President of Earth)

President: “Durand Durand is the inventor of the Positronic ray… it’s a… it’s a weapon.”
Barbarella: “Weapon ? Why would anybody want to invent a weapon ?”
President: “How should I know ?”
Barbarella: “Heh, I mean the universe has been pacified for centuries.”

“Make love ? But no one’s done that for hundreds of centuries !”

Pygar: “You’re soft and warm. We’re told Earth beings are cold.”
Barbarella [smiles]: “Well… not all of us.” 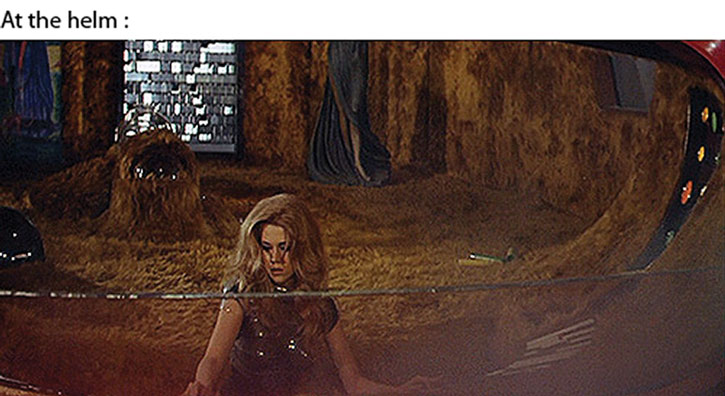 “De-crucify the angel or I melt your face !”

(While being pecked to death by a flock of small birds) “Help ! It was really much too poetic a way to die.”

Dildano: “Tell me, are you typical of Earth women ?” (While looking her up and down)
Barbarella: “I’m about average.”

“You saved my life. I’m sure I could get you a substantial recompense from my government.”

A 320 points Character (without equipment)

Alphie’s navigational ability is based on magnetism and therefore may be manipulated by Magnetism powers, or Magnetic anomalies. The interior of Alphie is shag-carpeted, floors, walls and ceiling.

During Temporal flight, Barbarella normally sleeps the hours away. She does this with the aid of specially crafted chemicals in pill form. Barbarella is able to sleep for hundreds of hours and is awakened by the singing of the on-board computer. Upon awakening Alphie gives Barbarella about two ounces of nourishment in liquid form. The liquid doesn’t taste good but seems to be enough to supply all of Barbarella’s needs. 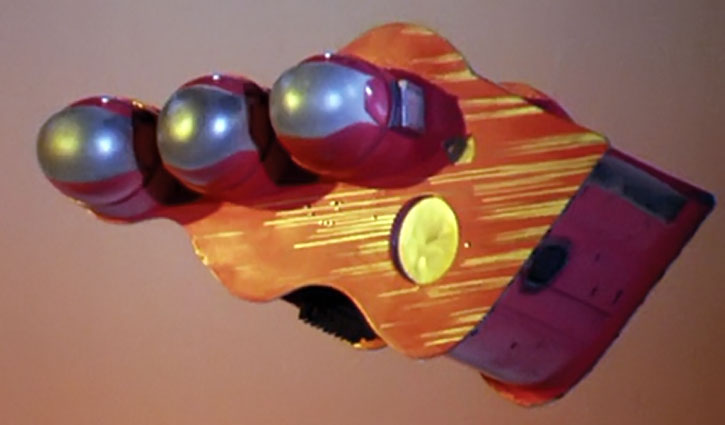 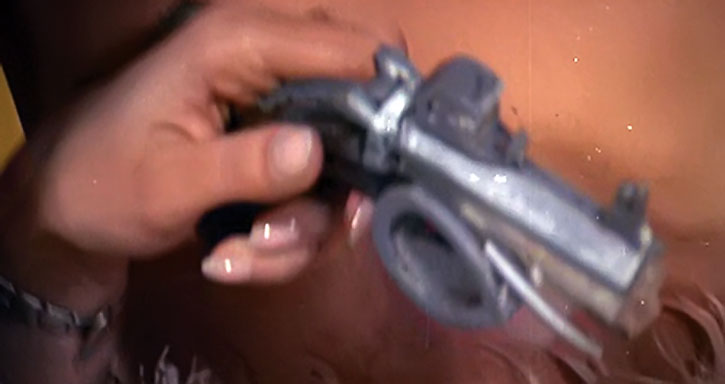 When Barbarella talks to the President of Earth, we discover Durand Durand has travelled to the Northstar and vanished into the uncharted regions of Tao city. We don’t know where Barbarella is at the time but she states she will leave the zone of solar attraction in seven minutes. I assume this is Earth’s Sun.

She then asks the computer how long it will take to reach the Tao City gravitational field. Alphie states “154 hours and seven minutes, Earth time.” If the solar attraction zone is our solar system’s sun, we can calculate the distance and the speed of her craft. According to Wikianswers the Northstar is 430 light years from Earth (60 APs.) When we do the math – I come up with a speed of 46 APs in Temporal flight.

Source of Character: The 1968 Movie Barbarella Queen of the Galaxy Played by Jane Fonda. 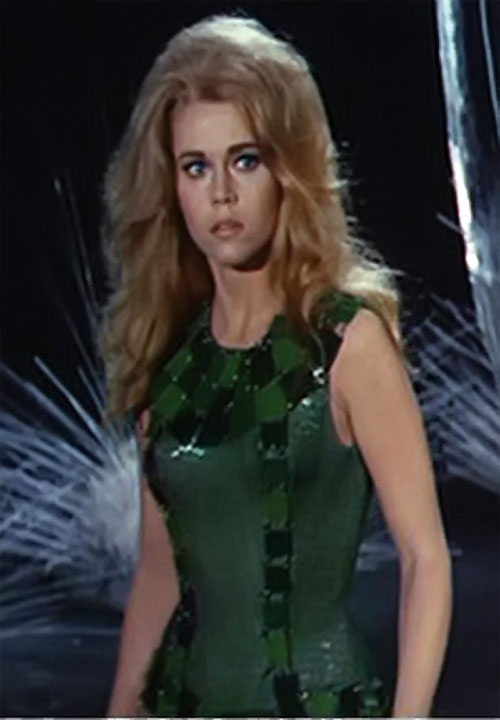 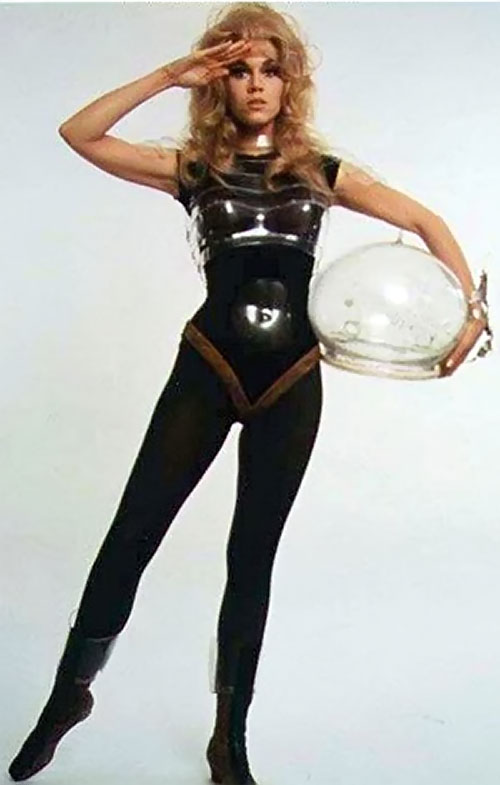 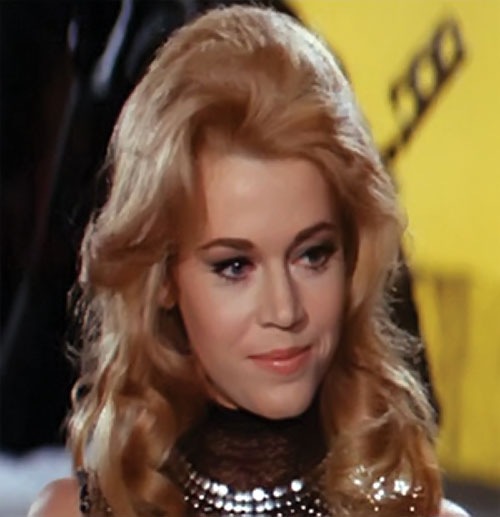 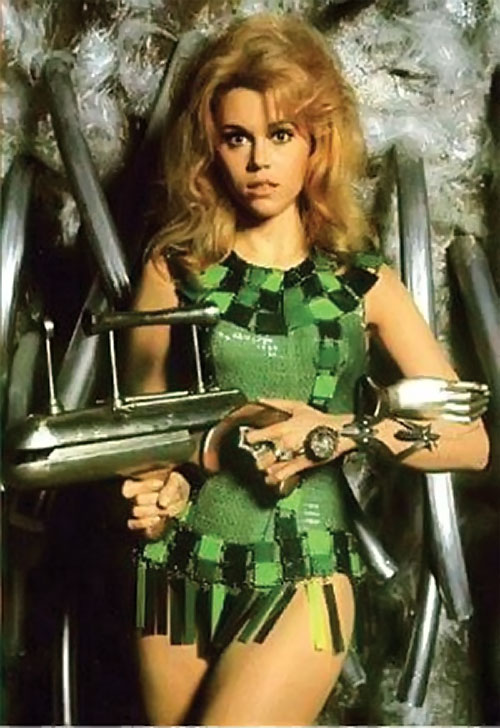 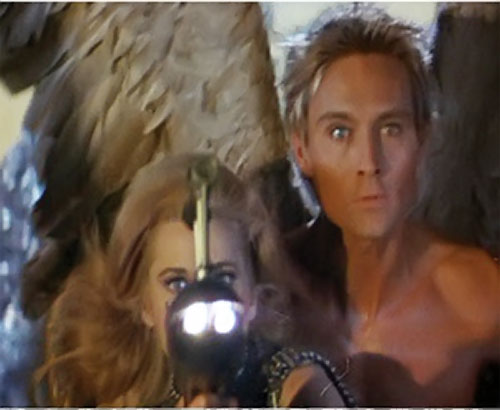 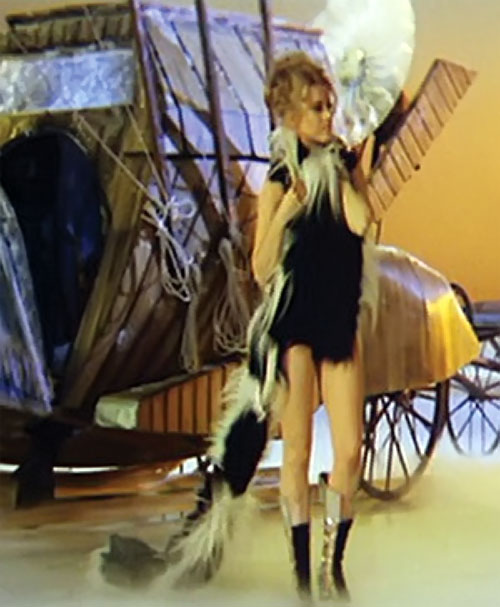 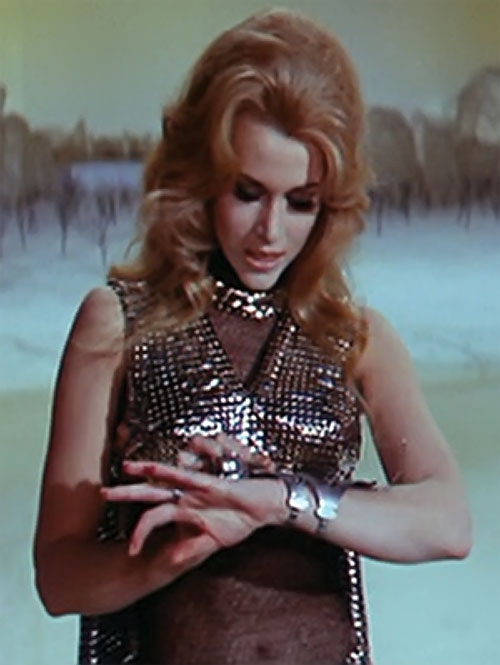 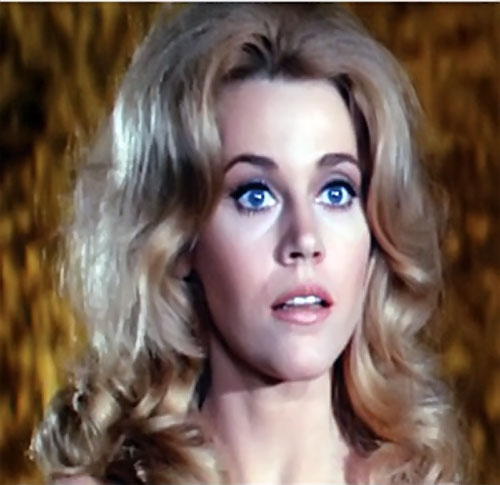