A trained combatant, Barbie is skilled with a number of firearms, missiles, and melee weapons. But she prefers to fight with a pair of sharp-edged pokers, the ends of which can be quickly heated up.

She may also have some training in psychiatry.

An assassin for Gila’s S.K.I.N.S. organisation, she is also a double agent for Madam Imadam, head of the Palindrome.

When Spyboy became a problem for S.K.I.N.S., Barbie was sent to spy on him, taking a role as school psychiatrist.

Barbie Q was assigned to handle the operation for crop spraying the UN with a nerve gas. S.K.I.N.S. had been hired to do that by the Hindasti authorities, and had subcontracted to the Palindrome. Spyboy and Bombshell turned up to foil the plan. After Barbie briefly knocked Spyboy out, she piloted the surviving plane toward the target.

Spyboy and Bombshell hitched a lift, though. They threw Barbie out of the plane before landing it and disabling the gas. But Barbie had been wearing a parachute, and survived the fall.

Travelling to Marispan at Madam Imadam’s bidding, she was met at the airport by Takematsea, supposedly to drive her to Madam Imadam. He actually had orders to kill Barbie on the way, punishment for her failure. She survived the attempt, and escaped the car before it went over a cliff. Takematsea didn’t realise this for a while. 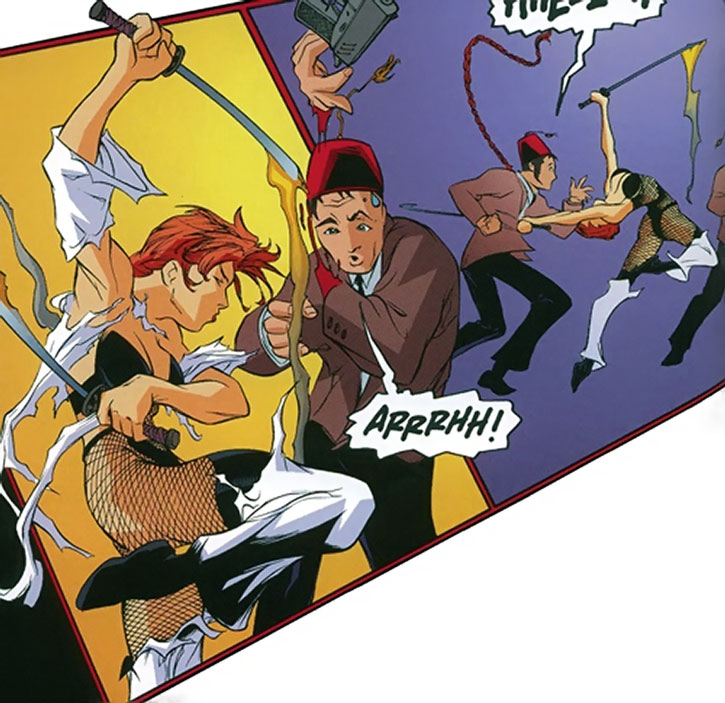 Following Takematsea to Madam Imadam’s casino base, her attempt to sneak in failed, and she ended up battling Takematsea again. She was apparently beaten, but again survived. She eventually found herself standing over him after he’d fallen from Madam’s escape rocket.

She was prevented from getting her revenge when the crashing rocket sent a tsunami washing them away. It’s unknown whether Barbie survived this.

Serious and easily angered, Barbie prefers a straightforward approach of directly attacking her targets, but will reluctantly work undercover when ordered to.

She tends to hold grudges against those who’ve crossed her.

“Look at the plummeting averages at this school. And they call themselves teachers. Spare the rod, spoil the child. Bet they’d work harder if I shoved one of my rods up their little —”

[Having just killed a snitch] “She seemed prepared to spill her guts. I simply facilitated it.”

The Scholar (Psychiatry) is based on her role as a school psychiatrist. But it’s unclear that she’s actually had any such training, or whether it was just a role she adopted.