Barney is a high-level guard in the Black Mesa Research Facility. He has the security training and clearances to match.

Barney also has some skill in maintaining and repairing the various systems at Black Mesa. Since it is hard to find workers who pass the background checks and the guards often end up passing through most every section of Black Mesa anyway, most of them end up doing double duty as maintenance workers.

Barney’s pal Otis has similar skills, though he is not quite as talented as Barney.

Barney Calhoun’s life was fairly uneventful up until his hiring by Black Mesa Research Facility. He spent two years at Martinsen College taking general classes, but found himself bored.

He was recruited by Black Mesa during a job fair. Barney took to his new profession with great zeal. He also became good friends with another security guard named Otis. Barney’s skills quickly got him promoted to the highest level of security, guarding the hazardous materials lab. 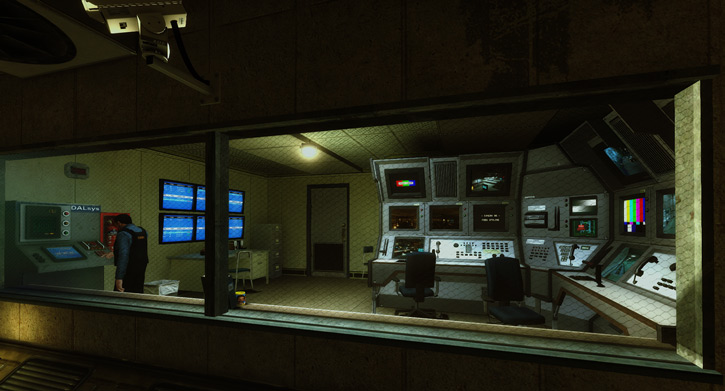 When the Xen incursion wrecked Black Mesa, Barney worked with some of the scientists to escape the complex. Finally, with the aid of Drs. Rosenberg and Bennett, who had access to a prototype of the dimensional teleporter that was used to travel to Xen, Barney and his associates escaped Black Mesa.

Though he and Otis ended up being separated before Barney’s escape, Otis is fairly resourceful and might well have found his own way out and reunited with his partner.

Barney is a clean-cut, fit young caucasian male of average height and build, looking a lot like a stereotypical extra for a TV cop show. His Black Mesa Security Uniform consisted of a light blue button-up shirt, navy blue pants and tie, and black shoes.

While on duty, he carries a Glock in a hip holster and wears a chrome safety helmet with black trim and a black tortoise shell ballistic vest with the Black Mesa emblem in yellow over the right breast and the words “Black Mesa Security” on the back, also in yellow. His ID badge is usually clipped to the left shoulder strap of his vest.

Otis is an older Caucasian male with balding salt-and-pepper hair and mustache. His love of donuts is reflected in his beefy build. His clothing is usually loosely fastened and slightly rumpled, fitting with his relaxed attitude.

Barney is all business while on-duty, but still fairly amiable. His ability to deal with the erratic and peevish scientists of Black Mesa was as highly valued as his other security skills. 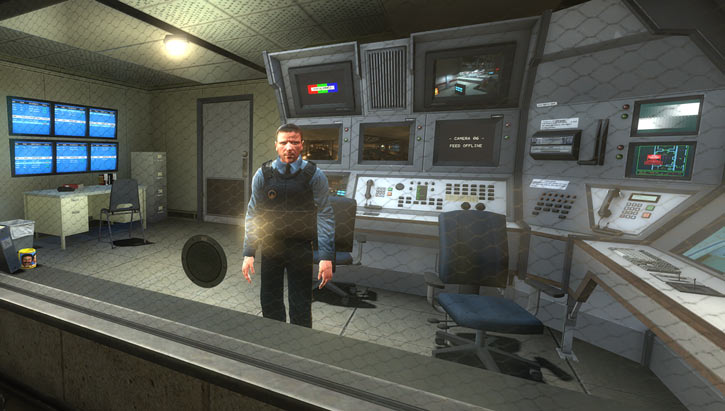 Despite his history of meandering through life, he has found himself inspired by his work at Black Mesa. He took pride in even the simplest tasks. Consequently, he took the attempts of the US military to wipe out all evidence of Black Mesa very personally. Barney thus inflicted some payback before escaping with some of the scientists.

Otis is a very laid back man who is quite content to stay in his current position, which he regards as an ideal compromise between privilege and responsibility.

Unlike most of the unfortunates trapped in Black Mesa during the Xen incursion, Otis seemed to be enjoying the opportunity for a good shoot-‘em-up with the aliens.

As he shoots a Xen alien: “I can’t wait to put that one on my trophy wall !”