Barney is able to juggle well.

Everyone he speaks to listens and no-one has ever disagreed with him.

He is the great mediator. In the rare occasion there is an argument between the children, Barney has no problem resolving it, with both parties leaving happy with the decision.

Barney also possesses a transcendent awareness of his own identity as a TV character, living in a TV universe, watched by TV viewers. This awareness gives him the ability to speak directly to the viewers.

Barney began by watching our world from the safety of his own dimension, particularly an elementary school. Michael and Amy, two children who go to this school, wanted to surprise their dad with birthday party.

Amy found the Barney plush toy in a box in the garage and used her imagination to make him come to life. Barney used this opportunity to appear, meet the children, and use his magic to befriend them.

Barney has returned to the Earth dimension many times and even brought children from his own dimension with him. Years have passed and Barney is quite the expert when it comes to children’s songs and games.

The Dimension next door

Barney and his other dinosaur friends arrived on Earth from another dimension. The doorway to our dimension located in the park. Other doorways have been mentioned, as well as the generic saying, “…Barney can be your friend too if you just make-believe him.”

When entering Barney’s home dimension all the dinosaurs take off at a run vanishing in thin air, sparkling lights follow. Only Barney is different in that after he vanishes a stuffed Barney toy is left behind. 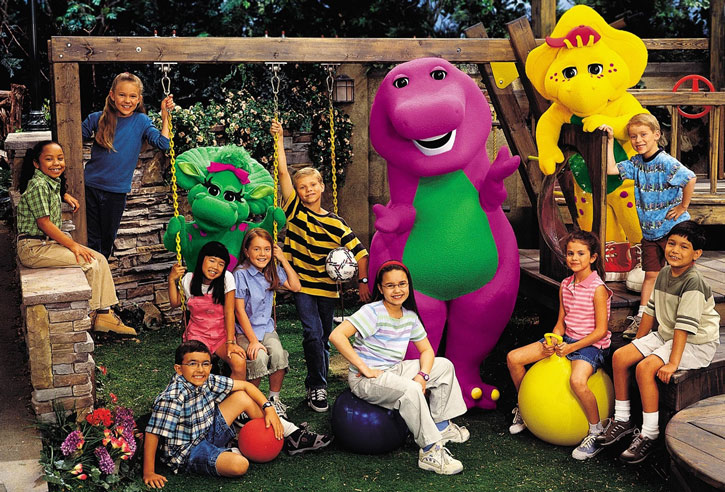 The name of Barney’s home dimension has never been stated and little is known about it except where Barney and friends are concerned. Inside, the dimension is a completely white plane. Barney, BJ, and others practice songs, dances and games here.

They also learn about safety and practice it in preparation for the time when it will be demonstrated again for the children of Earth. The children from the park never enter Barney’s home dimension.

Using magic, Barney is able to create anything he needs.

One last aspect of this dimension is that Barney may peer into our world from that dimension without being perceived himself.

Barney is an anamorphic purple Tyrannosaurus Rex. Though Barney is a T-Rex his teeth are flat like a plant eater. Barney’s voice was deeper and more mature in the early Backyard Gang videos.

Barney has a friendly optimistic attitude that some may find annoying. Despite being a carnivorous dinosaur, this T-rex likes many different kinds of food, even fruits and vegetables.

His favorite is a peanut butter and jelly sandwich with a glass of milk. Barney’s favorite bread is pumpernickel. He also loves marching bands and parades. 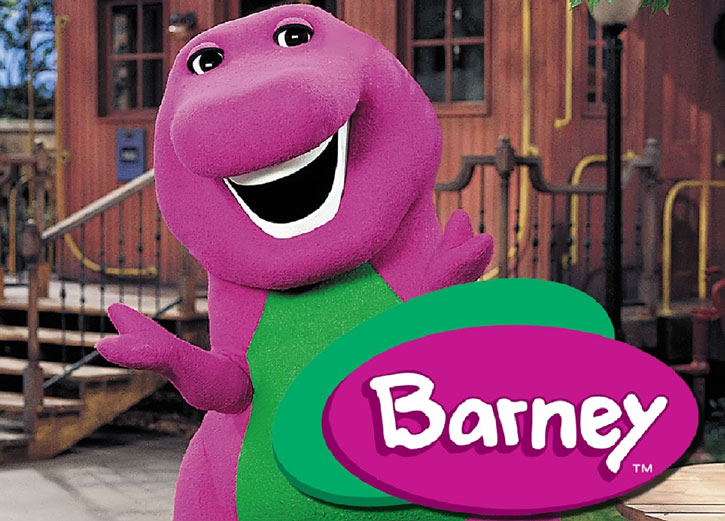 “Maybe I can help ?” (Jumps into the air) “Ahhwooo !” (and something magical happens…)

“And remember, I love you.” (Waves goodbye)

I see Barney running into some trouble when he does his magical happiness in the DCU. Even though Barney is a good guy with altruistic motives, others may not see it his way. He’s an other dimensional being manipulating the minds of others AND he is targeting children.

I think there would be too many unanswered questions to just let him “do his thing”. When he is understood he could be accepted and trusted but it would take some time.

The DC Universe has Crocky – a small children’s character vaguely resembling Barney, who appeared in Phil Dixon-written books. Next to nothing is known about it, but it’s a very common toy that little children find comforting.

Drawbacks:
Catastrophic Irrational Attraction to teaching and playing children’s games, Misc.: Barney has no motor control over his tail.

Barney’s Body score was arrived at because of his good health and overall size. The Body score is a guess since Barney has never taken damage or been injured at any time.

Looking at the magic Barney is capable of; I believe he is useable as a Dimensional traveler attempting to learn about other worlds.

Barney’s Influence and Aura stats have grown over time along with his Artist skill. Before becoming interested in our dimension, Barney had none of his current advantages or drawback.

Barney looked a little different in his early appearances being stiffer in his movements, Dex was an AP lower.

Barney was taught the songs and games by the children and a lot had to be explained to him. He also carried or teleported magic items to the Earth realm. One in particular was the “Barney bag”. A magic bag holding more items than a bag of its size physically could hold. 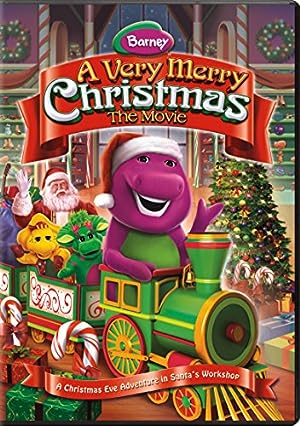 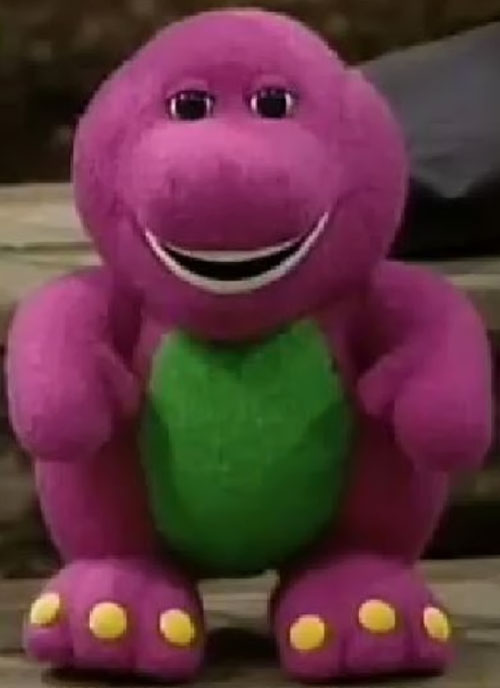