Mr. Ling was the head of a terribly mysterious intelligence agency in the 1970s DC Universe, called G.O.O.D.. For more context, you can first check our Richard Dragon Kung Fu Fighter character profile.

He’s also great if you want to bring back our selection of Richard Dragon characters – people like Sing, the Preying Mantis, Topper, etc. could still be agents of G.O.O.D. !

Barney is a gifted power broker and intelligence insider. He’s a talented fixer and smooth operator.

In 1975 Ling learned that the O-Sensei two star pupils, Richard Dragon and Benjamin Turner, were nearing the end of their training. He drove to the dojo, quickly tested them with some thugs, then asked them to join G.O.O.D..

Barney Ling then launched their first mission. It was custom-tailored to hook them, and in particular Turner. They went to Sudan, and dismantled the slavery ring of one Aki.

Turner and Dragon then moved on and travelled to the US. However, one of their friends was kidnapped by an international assassin called the Swiss. Immediately learning of this, Ling came to them. He started what would become his modus operandi – he offered them information of critical importance to solve their problem, in exchange for services.

The first such service was insignificant. Ling simply was kept informed about Dragon’s assaults against the Swiss and his men, in an effort to determine where the Swiss’ employer was. Ling eventually stated that this paymaster was criminal industrialist Guano Cravat, though no proof was provided. He told Dragon where to find Cravat.

G.O.O.D. had recently acquired another top agent, Lady Shiva. In typical Ling fashion, the relationship between Shiva and G.O.O.D. was unclear. It seems likely that Shiva was at that point a triple agent, pretending to work both for Cravat and Ling to gain revenge over Richard Dragon.

However, when Dragon convinced her that Cravat was behind her sister’s death, Shiva became a straight agent for G.O.O.D..

Whether Ling knew about Shiva’s complex gambit is unclear. He said he knew all along, which both sounded pretty weak and didn’t make much sense. Yet he then produced two ancient Sing-Lu-forged katana as gifts for Shiva and Dragon. Which may indeed mean he expected events to turn this way all along.

Shortly after, Mr. Ling was flying in a seaplane carrying a stolen atomic bomb. The warhead had allegedly been recovered by one of his agents, and Ling intended to personally deliver the bomb to the President of the US. But the plane flew near the pirate island rules by Slash, and Ling foolishly got rid of the bomb within an active volcano.

Thankfully, Shiva and Dragon were onboard. The pair managed both to prevent Ling from being killed and recover the bomb while defeating Slash and his men. Dragon decided to never work for Ling again.

But Ling was determined to retain the Kung Fu Fighters as his agents. He secretly masterminded assassination attempts on Ben Turner, then traded bits and pieces of information about those attacks in return for missions. Thus, after the first attack (a drive-by shooting), he sent the Kung Fu Fighters to capture the Preying Mantis.

In return, he told them how Ben had just inherited a bunch of timberland after the death of his sister. He then told Shiva about it. As a result the Kung Fu Fighters defeated Hatchett and his men, who had killed Turner’s sister.

After a new attack on Turner, Ling announced that he couldn’t actually tell who was behind the conspiracy. He said that the agent with the info had been killed, making Ling unable to verify the original report.

Barney Ling then of course sent the Kung Fu Fighters to China to trace the killed agent. This conveniently resulted in our heroes foiling a dangerous criminal conspiracy.

Within hours of coming back to the US, Turner was shot using a poison dart. US hospitals could only hope to delay this exotic toxin’s action. However Shiva was familiar with the League of Assassins. Identifying the operatives and poison, she explained how they could get an antidote by capturing the League’s chief poisoner, the Viper.

It is almost certain that the League had actually been hired undercover by Ling. Quite possibly so he could recruit the Viper for himself after Shiva and Dragon located and interrogated him. If that was the plan it failed. The Viper was apparently killed while escaping. But Dragon found another way to neutralise the poison.

After Turner and Dragon clashed with the operatives of Professor Ojo, they barged in at Ling’s place to demand information. But Ling knew everything already. He sent them to the North Pole, which was indeed Ojo’s base. Ling even provided a special boat and a special pilot – Lady Shiva.

However, while the mission was successful, Turner was captured by Ojo and disappeared. Turner was then brainwashed by the League of Assassins and remade as… the Bronze Tiger !

The crafty Ling managed to obtain the Bronze Tiger. He now had his dream agent – a perfect martial artist and assassin, entirely loyal to him and accepting all orders without hesitation.

Knowing Dragon could probably somehow break the brainwashing, Mr. Ling had Turner launch a covert series of assault on Dragon’s pupils and friends. The goal was to chase him away from the US, which eventually succeeded.

Months later, while meditating, Dragon realized what was going on. He came back and sneaked into the G.O.O.D. headquarter. And indeed, he found Ling discussing with the Tiger ! As the two Kung Fu Fighters fought, Ling smugly admitted the whole charade. But seconds later, Ling was accidentally defenestrated by the Bronze Tiger and seemingly killed.

This left the now masterless Bronze Tiger purposeless. Thus, Dragon had him taken to doctors to break his conditioning. Among other specialists, Amanda Waller would eventually be successful.

However, the cemetery staff that was burying the supposedly deceased Barney Ling soon discovered that the coffin was… empty !

The meaning of “G.O.O.D.” was one of this big mysteries of the book. A prize was even offered to the reader who could come up with the best acronym.

In keeping with this silly mystery, I will of course not tell you what it was. Feel free to wonder endlessly.

The *nature* of G.O.O.D. was a more perplexing and interesting enigma. My own take is that G.O.O.D. actually doesn’t exist. Mr. Ling is just one man, independently wealthy and infernally-well connected, who runs his own agenda. The pretence that he’s just a broker for a large, shadowy organisation is just a diversion.

Ling comes across like, at best, a smirking used cars salesman. And, at worst, as a ruthless blackmailer and exploiter of misery. Nobody likes him and he seems to like it that way. But he holds all sorts of cards, people need him, and he knows it.

Being shameless, he uses his money and connections to wallow in escorts, cigars, liquor and general lowbrow luxury.

While he’s not likable, he’s pretty convincing. Ling will often have people accept his information without any proof.

Ling is fixated on acquiring and retaining the very best agents to advance his mysterious agenda. He will not hesitate to kill people and wreck lives to manipulate said agents so they remain on his payroll. Or to come up with fake missions so they can feel better about working for G.O.O.D..

One of Ling’s specialities is reacting as if he always knew everything all along. This will usually comes across as a pathetic attempt at making it look like he’s in control. Except he will always produce a piece of information or equipment demonstrating that he, indeed, knew all along. No matter how unlikely that may be.

What is Ling’s agenda ? Nobody knows.

In the field, Ling sucks. He takes ill-considered decisions and is a coward.

Barney: “We are an international peace-keeping group ! We hire our services to governments and individuals we deem worthy !”
Richard Dragon: “Have we heard of your outfit ?”
Barney: “Certainly not ! We call ourselves G.O.O.D. ! What the initials stand for is not important !”

“I greet you, gentlemen, and I dispense immediately with further politeness !”

Ling: “I have nothing to do with this attack ! However, friend Ben has an enemy — one he knows nothing about… one planning his death ! I, and I alone, can reveal this person’s identity !”
Turner: “Spit it out, man !”
Ling: “Not until Dragon agrees to perform a certain task for me !”

Dragon: “Sorry to interrupt the party, Barney !”
Ling: “Not at all, Richard ! In fact, I was expecting you. You’ve come about the stolen submarine ?”
Dragon: “How did you know ?”
Ling: “I have my ways ! And once more, our interests coincide !”

Equipment:
A box of Cuban cigars. 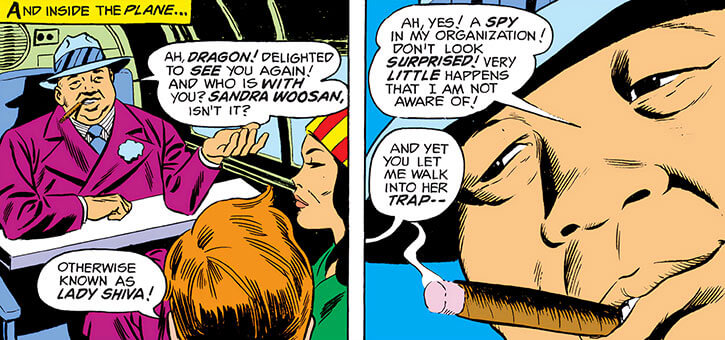