Bedlam is a rather large man, and is pretty strong. He’s very well-trained in hand-to-hand combat, and was a more accomplished fighter than a young Brion Markov.

Bedlam is intelligent, manipulative, charismatic, ruthless and very rich. With his Charisma Skill and his Scholar, he can build some really weird alliances under unlikely circumstances.

People under Bedlam’s command, from soldiers to short, fat doctors, have an incredible track record at knocking people out from behind. This goes beyond even the usual Genre rules about such attacks. 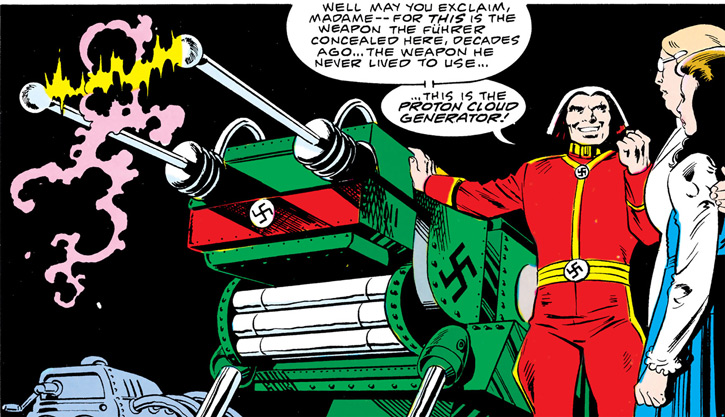 Given this belief-defying success rate, I eventually decided it must be an ability of Bedlam’s. Perhaps he inspires people to be sneaky bastards. While this may look like a gimmick, it has proved to actually be a very useful — if improbable — ability in the stories.

Bedlam is often, but not always, armed with a .45 pistol. He briefly had two Proton Cloud Generators — one portable model and a cannon — and those were basically area-of-effect disintegrators.

Bedlam briefly had powers akin to those of Geo-Force or Terra. However, they are only viable for a Markov — in another person such as Bedlam, they lasted for less than an hour. A second treatment would have been fatal, according to Jace.

Carmen Sandiego, you’re our only hope

The geography of Markovia is, at best, confusing. In Batman and the Outsiders v1 #1 (and Adventures of the Outsiders), the pocket-sized nation of Markovia is puzzlingly nested between France, Luxembourg and Belgium, which we are told means it is situated in “Eastern Europe”.

The ever-lovable Atlas of the DC Universe by Mayfair sensibly moved it to the southern Swiss frontier, North of Italy – and did not refer to it as “Eastern Europe”. Markovia might be a former canton that did not join the Federation for political reasons.

However, this change in location makes the history of the Nazi invasion of Markovia, narrated in Outsiders books, rather strange. Thankfully, having it invaded by Italian Fascists actually works better for the story, so I’ve changed the Nazis to Fascists in the History section below.

The native language of Markovia is, of course, American English. What were you expecting, Swiss German ? Any random American will sound just like a native Markovian.

Likewise, the flashbacks imply that Bedlam was born in the 1920s… which was problematic even in 1983, when the story was published.

See our standard assumptions about comic book ageing at the Leòn Genetic Sequence writeups.org article ; beside he was cloned by his second appearance, making ageing a moot point.

The story of Bedlam starts with his father Gunther, an obscure bureaucrat toiling in the Markovian administration in the early 1940s. A pro-Fascist, Gunther envied the events in Italy since the March on Rome (see above for the role of Italy and Germany in the story).

When war was declared and Italy started invading foreign countries, Markovia was likely the first on the list. The tiny kingdom soon fell, and Gunther DeLamb was selected when the Italians decided to appoint a quisling — he was likely the highest-ranking Fascist sympathiser in Markovia. King Viktor of Markovia was exiled.

Bedlam was then a young man, and since he had free reign over Markovia thanks to his father his Power Lust motivation went into overdrive.

He got his distinctive facial scar in those days, when he picked up an attractive young woman at a café, giving her a choice between sex with him and imprisonment. The woman shattered a bottle on his head and cut him deeply over the left side of his face. She was hanged for this.

Late in the war, after an attempt on his life, Adolf Hitler secretly came to tiny Markovia. History recorded nothing of the discreet visit, but Bedlam saw him. Wondering why the Führer came, he eventually determined that he and his entourage had come to hide some sort of last ditch, secret asset in Markovia.

Eventually, the Allied troops came and liberated Markovia from the blackshirts and local collaborators ; one panel showed the legendary Sergeant Rock present. Mr. DeLamb was hanged by the people, and his son ran for dear life.

He would spend the following decades amassing a fortune through unknown but presumably unsavoury means, so he could one day assemble a mercenary army and take Markovia. His Who’s Who entry vaguely hints that DeLamb made his career in finance.

The day came in 1983, when the aged King Viktor (reinstated by the Allies in 1945) was near death. The army of international mercenaries assembled by Bedlam, complete with tanks and commanded by one General Karn, rolled in as soon as it was reported that Viktor had died.

Though we are told that “millions” died, a much more reasonable body count might be in the low hundreds or high dozens, given the size of the country.

When he gained control of the majority of the country, Bedlam investigated the suspected Nazi cache, but discovered that it could only be opened by Adolf Hitler due to a DNA-keyed lock.

Through a series of freak coincidences, numerous adventurers were in-country at that point.

The military counterattack of Prince Gregor (who was next in line for the throne) was met by Kam’s dramatically superior forces, but the menagerie of costumed operators that was in town supported Gregor, easily turning the tide.

Bedlam forced Jace to enhance him with powers similar to those of Brion Markov and tried to kill Gregor, but was stopped by Brion Markov, now calling himself Geo-Force. Though Bedlam initially had the upper hand his powers then deserted him, since they were only truly viable for a member of the Markov family. 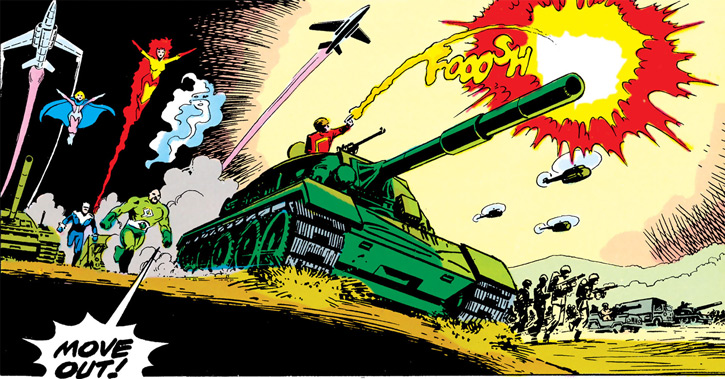 Defeated by Brion Markov when his powers suddenly faded, Bedlam saw his whole invasion crumble into nothingness ; as to General Kam, he had been killed by Katana. His men were routed by the costumed heroes.

Since obviously real heroes prefer a lynching to the International Court of Justice, Bedlam was thrown into the shrieking, pitchforks-and-torches brandishing populace (those wacky Europeans !) from the castle walls.

Bedlam was killed by the crowd, but a strange Germanic researcher named Dr. Ovarni (there were a lot of weird people in Markovia that day) took samples from the body after the crowd finished hacking it.

Dr. Ovarni’s speciality was cloning, or rather the ability to grow people back with all their memories, scars and the like from a few cells. Likely guessing that Bedlam would fund her research and drag her into weird opportunities where a mad scientist might thrive, she grew a Bedlam double.

The reborn Bedlam soon enlisted her in his nefarious schemes.

Since he now had cloning technology, Bedlam decided to hedge his bets during his next invasion of Markovia, by growing a Hitler clone who could open the cache. Using his resources, he discovered DNA of the Führer hidden by Nazis in 1945, and Dr. Ovarni started working with it.

From Russia with clones

Bedlam also somehow convinced the Kremlin to send some military units, including armour and Migs, to take Markovia under his orders (!!).

How he did so was unrevealed (though it must be one hell of a story), but apparently it rested in part on the notion that nobody would care about Markovia – NATO wouldn’t react and the news networks wouldn’t even pick up the story. This assessment was soon proved correct (!!).

Bedlam also hired the Masters of Disaster to help with special operations and to foil any superhuman intervention.

(If one wanted to retcon those events to something that less actively shatters suspension of disbelief, one may just posit that Bedlam and the Samaritan convinced a pair of non-Russian Soviet companies in Afghanistan to disappear and defect with their equipment, and procured some additional mercenary resources (such as older Migs, pilots, etc.) across the world.)

(An alternative would be mercenaries disguised as Soviet troops in order to provoke enough FUD and international hesitation for the coup to become fait accompli.) 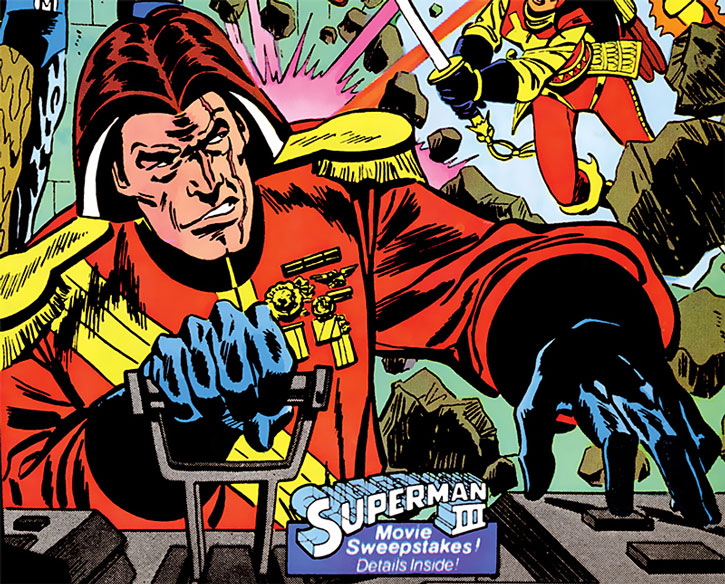 After they somehow reached Markovia, the Soviet forces took about 3 days to take the countryside and prepare to take the town. The Kremlin’s observer, the international shady type known as the Bad Samaritan, grew intrigued by Bedlam’s secret project and discovered that Ovarni and DeLamb were finishing growing an Hitler clone.

Bedlam had the Bad Samaritan imprisoned when he was discovered spying, which made the Russians rather suspicious. Meanwhile, the Masters of Disaster captured the team of Outsiders led by Geo-Force which had come to Markovia.

The Soviet forces, backed by the Masters of Disaster, stomped the last Markovian defenses and rolled into the city. With the Hitler clone (in full regalia but still having to recover his memories), Bedlam opened the cache and discovered a proton cloud generator. Meanwhile, the Outsiders escaped captivity. Bedlam used the Nazi regalia found in the cache to decorate his office, which started to make the Soviets really suspicious (those wacky Communists !).

The Outsiders escaped, defeated the Masters and the somewhat confused Soviet troops, and prevented King Gregor from being executed. Geo-Force confronted Bedlam and killed him despite the secret weapon, and the Hitler clone committed suicide when he understood who he was.

Bedlam was presumably cloned again, of course, though he wasn’t seen again for more than 15 years.

During a plot to take over and reform the Soviet Union in 2003, Sonar hired Bedlam, perhaps as a sort of consultant. Sonar also hired muscle (the Injustice League, the Royal Flush Gang, Eurocrime and Copperhead) and even later convinced the Global Guardians that the Justice League was invading Russia in an unprovoked manner (which wasn’t stretching the truth too far).

The Global Guardians soon switched side when they understood what the Justice League was doing in Russia, however, leaving little in the way of credible opposition to the Leaguers. Sonar tried to turn the tide with brainwashed super-heroes, but it did not work and his grandiose plan was wrecked. It is unknown whether Bedlam escaped capture.

His uniform seems Markovian in design — I would imagine it was the uniform of the Markovian Fascists back during the 1940s.

He’s a megalomaniac and a sociopath who wants to be absolute lord and master of someplace, so he can do whatever he wants without any consequences. Since he has a score to settle against Markovia and thinks it profoundly unfair that his father was deposed, Markovia it is — it is also quite small, which makes it an excellent target for his power lust.

Bedlam is clever, ruthless, manipulative and charismatic, and obviously behaves like a confident man who is used to being in a position of authority. He seemed to greatly admire Adolf Hitler, and to have a severe case of nostalgia for Nazi and Fascist regimes.

“I will make my own introduction ! I am your host and the author of this modest insurrection… I am Baron Bedlam !”

“’Madman’ ? Hardly ! I am but a man who wishes to regain one of his childhood possessions… specifically, the country of Markovia !”

“Do not call this a war — this is merely the herding of frightened sheep… but when prince Brion and his costumed allies come — that will be a war. That will be a conflict worthy of Baron Bedlam !”

“I’m an old survivor of the turning of the political tides.”

Whilst wielding Geo-Force-like powers, Bedlam had something along the lines of STR 09 BODY 09, Flight: 06, Energy blast: 10, Gravity increase: 11 and Earth Control: 10.

I have assumed that Geo-Force started with a DEX of about 05 and quickly improved as he learned to use his great strength to his advantage. 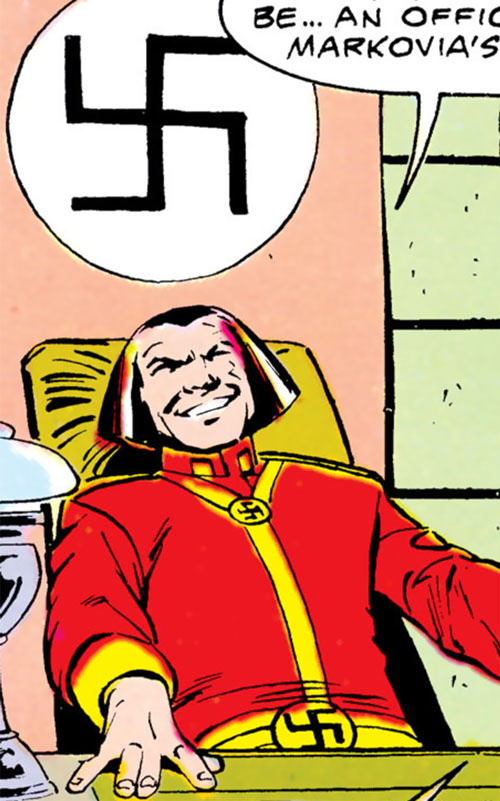 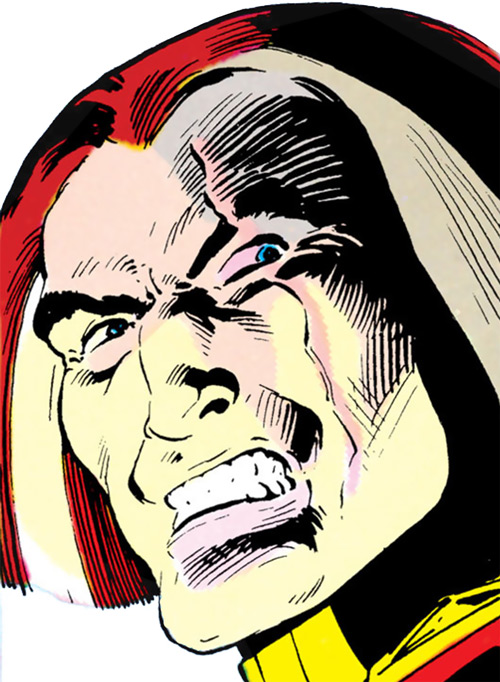