Baron Blood is not your average vampire, as his stunted physique might indicate. He has most of the traditional powers, but for some inexplicable reason is able to fly.

This ability has been theorized as a latent psionic  ability activated by his transformation. It might also be attributed to Gnobian antigravity technology incorporated into his costume.

Furthermore, he received special cosmetic treatments from German scientists during WWII. These inhibited his shape-changing abilities but gave him the ability to operate in broad daylight for short amounts of time.

His powers are also more developed than that of a typical vampire, although he’s no Dracula or Andrew Bennett. Thus, he :

Lord John Falsworth was the younger Falsworth son. He did not inherit much when his father died. Thus, he took the traditional choice of going away to make his own fortune. Touring Europe, he decided to travel along the paths described in Bram Stoker’s Dracula .

He intended to enslave Dracula and use the vampire to revenge himself, as he believed the events described in the novel were based on real facts. He was, of course, correct. Yet his confrontation with Dracula was short and messy. The lord of the vampires bit him and turned him into a vampire.

Dracula sent him to wreak havoc on the country they both hated, England. As WWI broke out, Falsworth offered his services to German Intelligence, and they invented the Baron Blood costume and identity.

After WWI, Blood was part of the occult revival in Germany. Thus, he came to appreciate Hitler and offered his services to the Abwehr .

Sent back to England, he was charged with creating vampires there to terrorize and kill the populace. However, his fixation on revenge against his family slowed him down. Calling himself John Falsworth, Jr., Blood pretended to be his own nonexistent son, and was accepted by his now-elderly brother as a member of the family.

Blood moved back into Falsworth Manor with his brother and his niece Jaqueline and bided his time. He savored the idea of making Jacqueline his immortal consort while forcing his brother to watch her be turned – at which point he’d turn his brother into a vampire, too.

The Invaders got in the way, clashing with Baron Blood multiple times and inducting Union Jack into their membership. In the end, Blood’s identity was revealed, and though he drained Jacqueline dangerously near to death and crippled his brother, he was killed when he was impaled on a stalagmite.

Jacqueline survived thanks to a blood transfusion from the Human Torch. This gave her superpowers and allowed her to become the heroine Spitfire .

Apparently, none of the Invaders knew how to kill a vampire permanently. Thus, they left his body impaled rather than severing his head and burning head and body separately and scattering the ashes.

Blood was raised some time later by operatives of the Japanese psychic Lady Lotus, and was forced by her to serve in a Nazi group of metahuman operatives called Super-Axis. He was slain again in short order by the Sub-Mariner, who impaled him with an immense wooden post.

Baron Blood was somehow resurrected again and became active in the frontlines in Europe, feeding upon Allied soldiers. Among the troops he preyed upon was the 5th infantry, including Colonel William Poprycz. Blood tortured Poprycz and his men, and had soon feasted upon all of them, save Poprycz himself.

Sgt. Nick Fury and his Howling Commandos were sent on a mission to kill Baron Blood, but Blood brought the commandos down with a gas attack, then imprisoned them in cells with Poprycz.

He began to torture Fury, attempting to sway him with the promise of eternal life. Finally, Poprycz seemed to break, and begged Blood to turn him. Blood complied, but when Poprycz had become a vampire, he turned on Blood and his men, killing most of them. He then tore open the base’s doors, driving Blood off with the sunlight.

Poprycz was killed by the sunlight, but Fury and the commandos were able to escape thanks to his sacrifice.

At some point during the war, Blood was slain once again, and again, his body was not properly disposed of. His body was sealed up inside of a coffin in the Tower of London  with a stake in his heart, and surrounded with garlic and Christian icons to prevent him from reviving.

A raid by Dracula’s operatives reanimated Falsworth in the 1970’s. Baron Blood then attempted to avenge himself on the now elderly Union Jack.

The British hero, however, summoned Captain America (whom he had fought alongside during their Invaders days) to help him in this fight. Cap investigated, aided by Union Jack III. He discovered that Blood was impersonating Union Jack’s physician, and decapitated the vampire with his shield. Finally his body was properly separated, burned, and the ashes scattered on the winds.

In the realm of Death, Blood was made a part of the Legion of the Unliving II by the Grandmaster while he possessed the powers of Death. The Grandmaster’s Legion fought the Avengers, allowing Captain America to kill Blood once again. Death eventually regained her power from the Grandmaster and undid his actions.

Improbably, Blood was apparently resurrected once again to fight the Knights of Pendragon. The Knights’ Union Jack killed Blood once more.

Baron Blood is a twisted, stunted, sinewy creature. He wears a gray and purple suit with batwing-like fabric under his arms and on his back, and a strange mask which looks like giant bat ears. His face has a certain bat-like appearance, and he has huge canines.

When he wants to pass for human, he wears false teeth to disguise his fangs and may wear glasses or a monocle to help hide his eye color.

Sneaky, cunning, and vengeful, Baron Blood is a bitter, sadistic monster with great bloodlust. Having been denied his inheritance, he hates the Falsworths, the aristocracy and England in general, almost irrationally so. He thus sided with the Reich out of opportunity as much as out of common characteristics.

That being said, Blood admired and identified with the evil of Adolph Hitler. He took pride in being the emissary of Hitler and Dracula, two of the worst monsters who ever lived.

“When last we met, I was denied the rich fluid that pulses through your waiting jugular !”

“Conscience is for lesser beings !”

Both Blood and Union Jack fit perfectly into the WWII DCU. Union Jack would have been helped against Blood by the Freedom Fighters rather than the Invaders. Blood could also appear as the replacement for Fledermaus in Axis Amerika (probably as a scout/assassin), making this already powerful group (for their time) stronger than ever.

The stats above are for Blood with the cosmetic treatment protecting him from sunlight, which was active during both World Wars. Without it, he suffers a Fatal Vulnerability to sunlight (2 points of Physical Killing Damage per phase), but gains Shape Change: 02 (only to a bat) and Self-Link (Fog): 04 plus Fluid Form: 06 [only while using Self-Link (Fog)].

His powers are Mystic Linked since MU vampires are unequivocally magical, and vampires in the DCU can successfully bite Superman. I added Ultra Vision because he mentions his vampiric senses and because he doesn’t seem handicapped in the dark. It also dovetails thematically with his excessive fear of the light from the Human Torch’s flame.

Vampires possibly also deserve Life Support (no need to eat except for the requirement to use Vampirism, probably no need to breathe) but I’ll leave that up to GMs.

By Sébastien Andrivet and Chris Cottingham.

Helper(s): Byron Molix, JKCarrier, Sean McQuaid, The Appendix to the Marvel Universe, one illustration by RonnieThunderbolts. 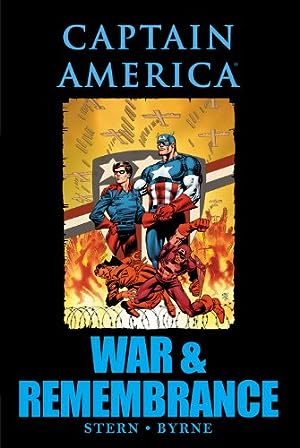 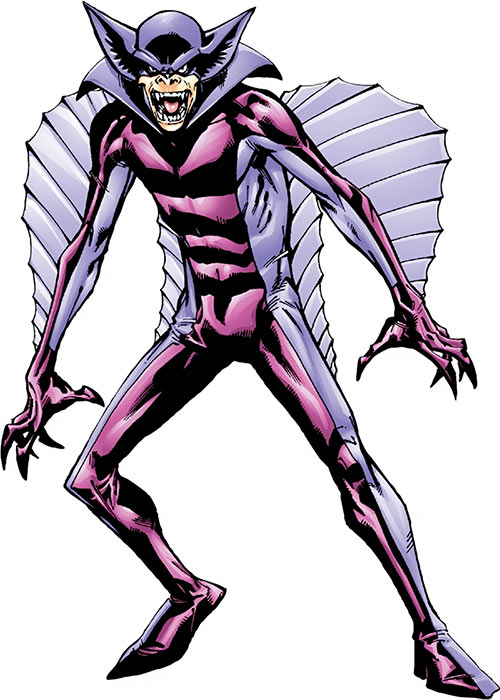 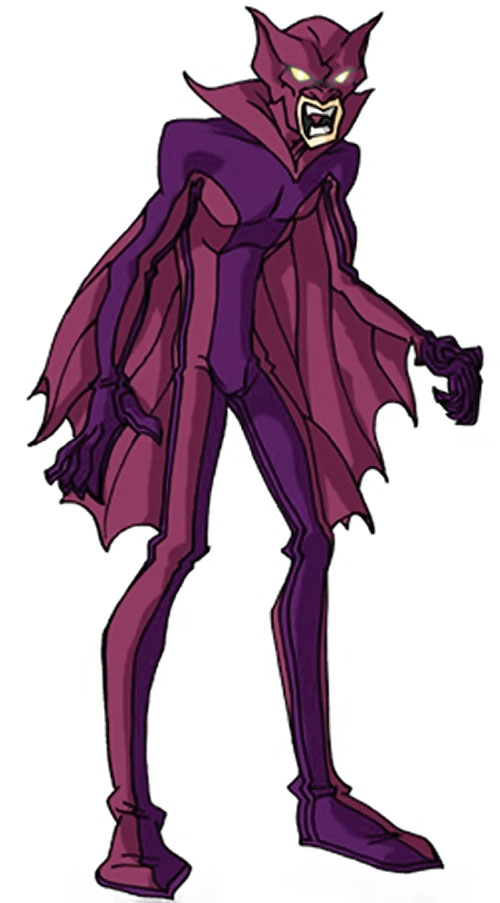 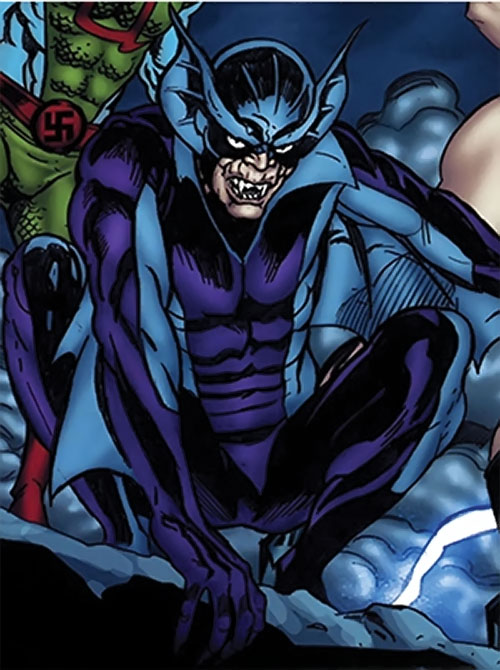 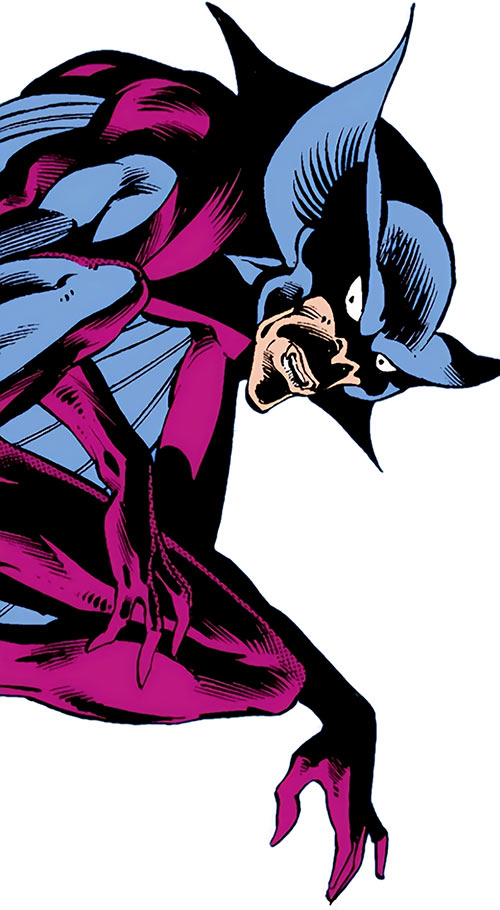