For most of his life, Strucker held no superhuman powers, although he would employ fantastic weaponry. His most notorious personal weapon was the Satan Claw, developed by HYDRA scientists. This metal gauntlet, worn on Strucker’s right hand, no only magnified that hand’s strength while he wore it, but also emitted powerful electrical shocks.

Strucker’s body now contains an irradiated form of the Death Spore virus that animates and preserves his previously deceased body. The virus can be released at Strucker’s will, causing immediate pain to any living target in his immediate area or on the victim he chooses.

Unless they are immune to disease or in possession of an antidote, Strucker’s victims quickly die.

Strucker claims that if he should be killed again, the spores will be released from his body “set free from my control, racing out from my body to revenge me on my killers — and everyone else.”

Baron Wolfgang von Strucker was born in Strucker Castle in Bavaria, Germany. He is the last known member of a long line of Prussian noblemen, all of who had distinguished themselves as military leaders. Strucker was recruited in the 1930’s by the Nazi government’s intelligence service and sent on various secret missions.

When Germany went to war, Strucker was transferred to full time service where he met with repeated successes as a military leader. He rose to become wing commander of Germany’s special Death’s-Head Squadron.

Strucker was soon ordered to destroy the bane of the Nazi army — American sergeant Nick Fury and his “Howling Commandos” squad. Strucker and Fury fought many times, always ending with Strucker’s eventual defeat.

During a latter skirmish between them, Strucker held the entire French town of Cherbeaux hostage for Fury’s surrender. Strucker agreed, however, with Fury’s request for a personal combat between them, letting Cherbeaux be evacuated. The duel ended in a stalemate, but when Hitler heard of Strucker’s deal, he ordered the Gestapo to assassinate Strucker.

Strucker escaped assassination by allying himself with the Gestapo villain, the Red Skull. On orders of the Red Skull, Strucker created a power base in the Far East for the Skull’s wish of eventually taking-over Germany. Once free of Germany, however, Strucker dissolved all ties with the Skull, in a bid for power for himself.

Strucker joined a secret society in Japan bent on world conquest, later known as HYDRA. Strucker rapidly rose to power and assumed leadership of HYDRA, calling himself the Supreme Hydra. Under his leadership, HYDRA also formed a scientific branch that in later years would become AIM.

Strucker’s first bid for power was defeated by Captain Simon Savage and the US Marine Commandos, along with their‘ Japanese counterparts, the so-called Samurai Squad. The heroes managed to destroy Strucker’s base, Hydra Island.

After being defeated by Fury while trying to rebuild HYDRA with German military secrets and funds, Strucker eventually retired to quietly rebuild HYDRA in the years following World War II. He used the best remaining men of the Nazi Schutz-Staffel (S.S.)

However, after nearly being killed in a conflict with a young Charles Xavier (now Professor X) and the villain now known as Magneto, Strucker decided to remain behind the scenes. Strucker moved HYDRA’s base to America, and created a new central committee code-named THEM, within HYDRA.

Strucker made himself Grand Imperator of THEM, its highest position. He masqueraded under a number of aliases in public life. Only a few of HYDRA operatives knew of their leader’s secret identity.

At some point, he fathered and raised the super villains known as Fenris. HYDRA’s activities during these years after the war remain largely unrevealed, although he had built a new HYDRA base, called Hydra Island, on the site of its original Pacific Ocean location.

In recent years, Strucker made his move against the international espionage agency, SHIELD, led by his old foe, Nick Fury. Strucker impersonated a SHIELD officer to smuggle a so-called Death Spore bomb onto the SHIELD’s flying headquarters. Strucker then demanded control of the world from the nation’s leaders.

Fury, however, had discovered the bomb and planted it within HYDRA’s headquarters, and confronted Strucker.

In order to escape, Fury made Strucker appear as himself. HYDRA agents mistakenly chased and killed their own leader, just before the Death Spore bomb exploded. The domed island contained the explosion and spores, though the headquarters sunk beneath the waves.

We shall never be destroyed!

HYDRA fragmented after Strucker’s death, but years later, one of the HYDRA fragments resurrected Strucker. Strucker is currently purging the ranks of HYDRA of those “unfit for duty,” and is scouring HYDRA bases worldwide “to offer my hand to those who will take it — and to those worthy enough to stand by my side.”

During one such investigation, Strucker encountered Nick Fury once again, but managed to escape to continue his perceived duty to HYDRA.

Baron Strucker is one of the most arrogant and dangerous villains on Earth. Vain, proud, treacherous, and extremely cunning; Strucker’s goal was the con quest and subjugation of the human race, the absolute humiliation and destruction of anyone who opposed him.

Now that he is revived thanks to the Death-Spore virus, he is even more maniacal and ruthless.

“Never apologize, boy. It is a sign of weakness.”

Per Seb’s Fenris write-up, moving Strucker (or the Red Skull) into the DC Universe would be difficult, as no WWII-era villains in DC ever achieved their infamy.

Bonuses and Limitations:
Poison Touch represents Strucker’s ability to emit the Death Spore at will, and applies to Strucker only after his reanimation. Strucker claims that if he should be killed again, the spores will be released from his body – this is left to the GM’s choice whether it is the case or not. 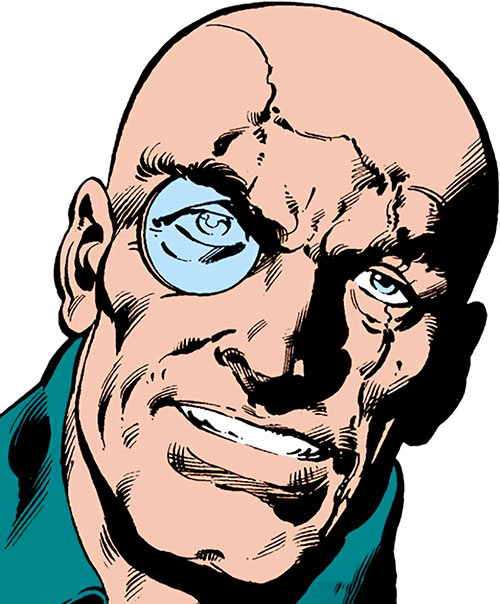