In her super-powered form, Barracuda possesses Powers of “deep-sea swimming and whale-like strength”. She can travel underwater at incredible speeds and can make tremendous leaps out of the water.

In one scene, she displays the ability to hover approximately 8 – 10 feet off the ground. But a closer inspection of the action indicates that it is, in fact, X’ult using his Telekinesis Power to levitate Barracuda.

Barracuda, Swordfish, Null, and Void all bear on their palms the strange symbol that X’ult wears on his chest. When any of these symbols contacts another, the bearers (with the exception of X’ult who always retains his powers) transform into their super-powered forms.

This transformation expires after 10 minutes but can be reset by once more bringing the symbols into contact before the time limit has expired.

Abigail Kent is seen only briefly in flashback. But every indication is that she possesses some ability with a sword as well as appropriate skills for her pirate existence.

Centuries ago during the age of piracy, an alien craft landed on the Caribbean island of Haiti (or Costa Rica. See below).

Among the crew of extraterrestrial explorers was X’ult, an aide to the second in command. X’ult was consumed by the desire to conquer. When the craft left Earth after its survey, the alien hid in the jungles of the island.

To enable himself to survive, X’ult arranged for one of the crew’s environmental adapters to be ejected from the ship when it took off. The adapter was damaged on its decent to Earth, its metallic skin melting into slag.

By the time the machine reached the island it looked like nothing so much as a large stone. One detail did survive, however. It was a strange symbol on one of the “stone’s” faces.

Not long after, Abigail Kent, a young and beautiful Englishwoman, sought the open seas. Abigail was fascinated by the tales of sailor’s adventures but she got more of an adventure than she had bargained for.

Though captured by pirates, Abigail was undaunted and did what was necessary to survive. But the harsh life filled with brutality to all that crossed their paths was not what she expected her life at sea to be like.

Before long, the pirates attacked a ship carrying an unnamed man who would soon become very important to Abigail. The pirates slaughtered the crew and passengers of this unlucky ship. However, the pirate captain believed this one man might fetch a fine ransom and spared his life.

Abigail knew that the man’s life was forfeit once the ransom arrived and she took pity on him. She helped him escape under cover of night and the pair swam ashore on the island of Costa Rica.

Almost immediately the two were set upon by natives of the island who forced them to submit to a weird ritual that ended with their palms being branded by a strange stone. Unknown to either Abigail or the unnamed man, this stone was X’ult’s damaged environmental adapter.

Certain that they were both going to be killed, the unnamed man kissed Abigail. She attempted to slap him. The man grabbed her hand and as their palms met they were transformed into Swordfish and Barracuda.

(In Null and Void’s origin story (World’s Finest Comics #304) the power-bestowing stone was found on Haiti. How it traveled between Costa Rica and Haiti is unrevealed and may be simply an editing gaffe.)

Using their newfound powers, Swordfish and Barracuda escaped the natives. They became the scourge of pirates across the Caribbean.

They soon came into conflict with X’ult. The alien had used his time control powers to become a master pirate. He became infatuated with Abigail and sought to make her his pirate queen.

In one encounter, X’ult froze time around the pair before they could touch palms and activate their powers. But the master pirate underestimated his own time-congealing powers. Thus, he also entrapped himself in his own time field. The weight of the time field (!?!) sent the ship on which the trio battled to the bottom of the sea.

Centuries later, the three figures resurfaced. X’ult was freed from his time prison by the villainous Void, who had received his powers in much the same way as Swordfish and Barracuda. X’ult, in turn, freed Barracuda and placed Swordfish’s beautiful partner under his control.

No more love on the run

Luckily, Swordfish was released from stasis by The Batman and the newly reformed criminal Null, Void’s partner. Swordfish, Null, Superman, and The Batman battled X’ult, Void, and the mind-controlled Barracuda. Barracuda attacked Swordfish and nearly killed him before he managed to break X’ult’s control over her.

In the end, Superman used his powers of superspeed time travel to destroy X’ult’s solid-time pirate ship. This sent Barracuda, Swordfish, and X’ult back to their proper era.

The pirate heroine known as Barracuda has a strange whale-like coloring to her skin. Her face, chest, abdomen, and inner arms and thighs are pale grayish blue while her back, shoulders, and outer arms and legs are navy.

Her costume is a simple affair consisting of a sash-like loin cloth of red with thin yellow stripes and a matching scarf about her head. She wears golden bracelets on each wrist and a large, golden hoop earring in her right ear.

She has fangs and nails that stop just short of being called claws. Her hair is dark and wild. Barracuda has a very ferocious and feral demeanor throughout most of her encounter with Superman and The Batman although that is most likely a result of X’ult’s influence.

In her non-powered guise, Abigail looks like a Hollywood piratess. She sports a black leather vest over a white, billowing blouse and black shorts. She wears black buccaneer boots, a black glove on her left hand, and a red sash about her head. Her scabbard hangs at her right side. Her black, curly hair is relatively short.

As one would expect of “the most beautiful woman in all England”, she is quite lovely.

Due to her mental subjugation by X’ult for nearly all of her time in the present, little is known about Barracuda’s personality beyond her love of both adventure and Swordfish.

“Ia ! Ia ! Swordfish! It’s you ! My love !”
(Poor quote, I know, but these are the only words Barracuda speaks of her own free will during her brief sojourn in this time.)

Barracuda and her adventures can easily have taken place in the post-Crisis DC Universe. In fact, the DCU age of piracy and Swordfish and Barracuda’s ongoing battle against the alien turned master pirate X’ult would make an interesting destination for a group of time-lost PCs.

Alternately, a post-Crisis Superman, lacking his pre-Crisis counterpart’s ability to reach time-shattering speeds, may have been unable to return Swordfish, Barracuda, and X’ult to their proper time. The Swordfish and Barracuda, stranded in the current DCU, might make an interesting and unexpected pair of NPCs to introduce in an adventure at sea.

And, of course, Superman’s musings about a possible familial connection between Abigail Kent and his adopted family are more easily explored if the piratess remains in the present day.

Drawbacks:
Alter Ego (Partially Controllable – only lasts for 7 APs of time without contact with another X‘ult tattoo), Exile (Involuntary, from the age of piracy; during team-up with Superman and Batman only).

There are three “iffy” areas on this one.

During their encounter with the World’s Finest team, Batman used his own body as a conduit for the transformation when Null and Swordfish could not quite reach each other. If any character attempts this conduit maneuver they are jolted by an immense release of power.

Treat this as a Bashing Combat Physical Attack with an AV / EV of 7 / 7 and an OV / RV of the conduit character’s Bod / Bod. The Attack appears to be energy-based and it is up to the GM’s discretion whether Energy Absorption might be used to avoid this damage.

Helper(s): Mace who is right about Barracuda’s Swimming speed. And Sébastien for showing how to make “leaping out of the water” work. 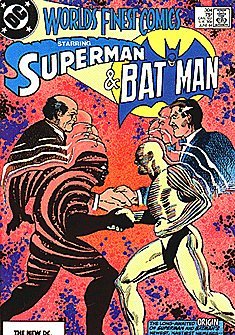