Despite having no training whatsoever Barry is a master marksman, demolitionist and melee weaponer. He can identify and use any type of technology on the spot and is also an aviator without peer.

For unknown reasons, possibly either due to some magical spells having been cast upon him or since he’s a dedicated history buff of older cultures, Barry fluently speaks numerous languages.

If a GM wishes to highlight his uncanny ability to apparently return from having been killed time and time again he could also be given the Invulnerability power.

It’s also possible that he is now a trouble magnet automatically teleporting to various larger threats in different time eras, which would equate to Uncontrollable Time-Travel.

Barry travelled using a wide variety of jetpack-inspired technology. His first jetpack was absurdly enough a large machinegun with unlimited ammunition mounted onto his back, which recoil provided him with the lifting power to soar through the air unhindered (brakabrakabraka…look out below!!).

His next jetpack was a miniature biplane mounted onto his back, and once he also used just an ordinary helium balloon as a backpack. He later also employed angelic wings for transport, a bubble gun machine providing lifting power, a rainbow device, and a mini-helicopter-like jetpack.

Furthermore, many more odd jetpacks were later used, as well as golden versions of them, just for style.

His other modes of transportation, besides jetpacks, included: 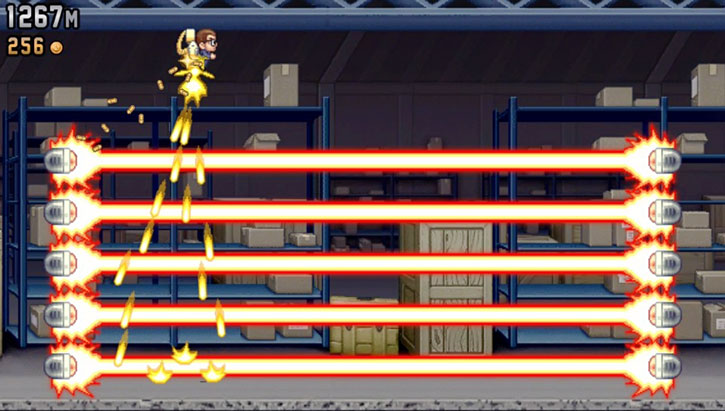 He was reasonably tough and durable and had an extremely fast trigger finger with great control and accuracy, as he is capable of gunning down hundreds of enemies in a matter of minutes.

Barry used to be a bored and down on his luck gramophone  salesman. One day he happened upon a lab performing secret research into new, secret aviation technologies. Barry, seeking the ultimate adventure, snapped, promptly stole an experimental jetpack, the first of many, and started the flight and fight of his life.

On the way, he also rode a mechanical dragon, a bird robot, a jumping ’bot and S.A.M. the ultimate robot. All the while he was hunted by “evil” scientists and their inventions trying to put him down (Jetpack Deluxe).

Barry then came upon a plot by the evil Professor Barry Brains. Brains would destroy humanity by infesting all periods of time with zombie hordes using his time portals. 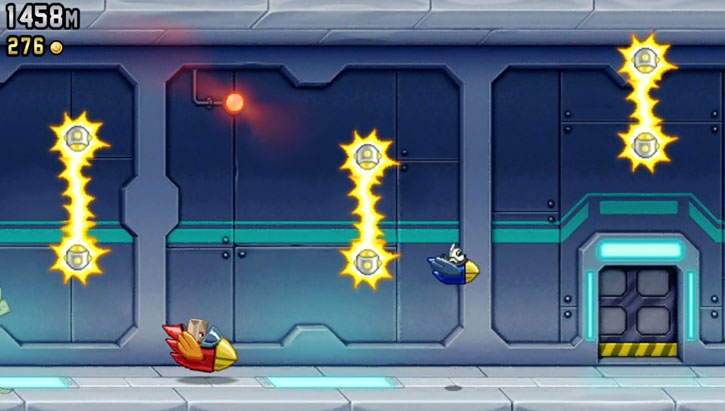 After gunning down the professor Barry went on to combat hordes of monsters and zombies while running like the wind, or, rather, riding his wild hog bike, to his next destination with a shotgun in his hands.

Thus, the mild-mannered gramophone salesman turned into a dragon riding, monster blasting, jetpack carrying hero ready to face any challenge to echo throughout the ages!

By jumping into the time warps through which zombies poured into various times, Barry followed them to all different eras and forcefully stopped the destruction of mankind, sometimes using the help of local populations.

Barry thus stopped zombies in the dinosaur age, the gangster age of the 1930s, the old Wild West, Ancient Egypt, Japan and the far future (w/ cyborgs), sometimes riding a dinosaur while putting all of them down at the barrel of a gun and numerous other weapons.

In the far future he eventually encountered an earlier time-travelling version of Professor Brains, now in a cyborg body, and fought him to a final death, thus permanently saving humanity from destruction by zombies in every time era simultaneously! 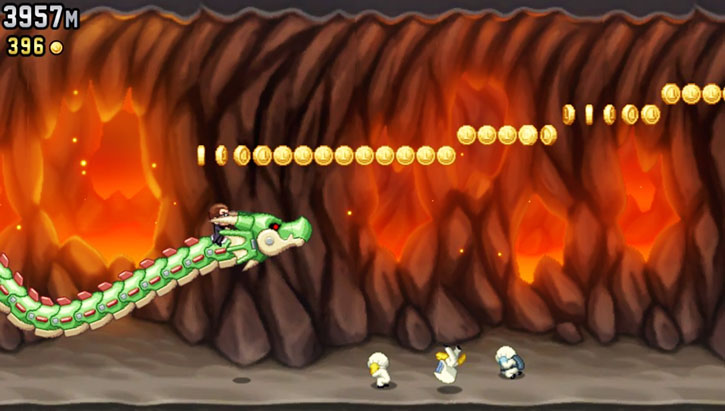 Of so Barry thought. Because afterwards, Barry’s immortality somehow brought him back in time to the old Wild West as he entered a toilet. He met a local woman named Ruby who explained that the undead had overrun the townsfolk.

And so, for a final time, Barry stopped the hordes of the undead. The new invasion originated from Mad Dog McDraw holed up in an abandoned mine, and after stopping him and his new hordes the threat was finally over (Age of Zombies).

Barry’s current whereabouts are unknown. Since he received immortality (or perhaps he already was immortal to start with – who still sells gramophones in this day and age?) as a reward from an immortal Egyptian wizard, Prince Runinggunin, he will no doubt resurface again.

He certainly can’t go back to normal life after all of this!

Barry often wears a fine suit, but his sleeves have been ripped off due to all the strenuous action he undertakes, or so he claims.

In reality, he obsessively rips off his own sleeves any time he is bored or goes into action. Sometimes he would wear a helmet or mask for style.

Barry’s sole motivation for his adventures is to escape boredom. The thrill of death puts a grin on his face, and he’s a true adrenaline junkie.

He, believing himself to be a classic action hero, attempts cool one-liners. He fails miserably at it since most sayings are excessively trite and cliché. 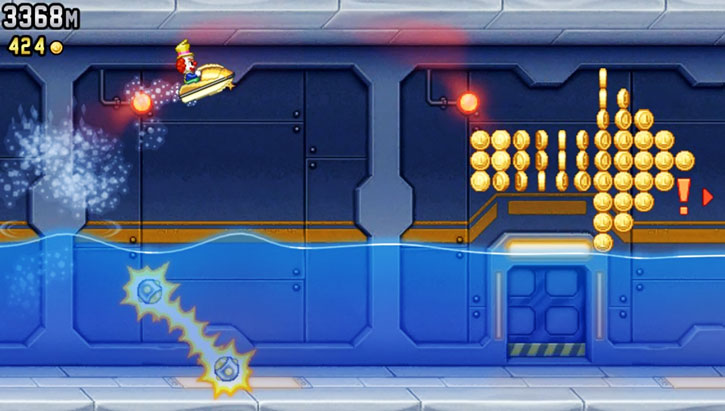 While human and unused to weird technologies and monsters, he regularly overcomes his fears with grit and resolve and thus becomes an omni-competent combatant, technologist and aviator.

Barry has no qualms whatsoever about innocent people getting caught in the fray, as long as the greater good is served, and he gets his fun.

As such, he enjoys destroying zombies by the horde and has no problem dispatching human scientists en masse on his quest for adventure.

“If anyone is going to save humanity, it will be me…[TO DO: Insert witty dialogue here]”

“Righteous. Righteous to the max. Badass Barry Steakfries is back !”

“It’s time to blow this lame future where every device starts with an i.”

“Because when it comes to one-liners… Steakfries never wastes time.”

“I always shoot fast when I’m with a pretty lady.”

Barry’s adventures through space-time would have been picked up with the Linear Men, the Time-Trapper, Dr. Borsten, the Legion of Super-Heroes and others.

He likely faced all of them at different times, ruthlessly gunning down those he considered evil and helping the heroes out against some local threat.

Since Barry was not a fan of a cyborgified future he will likely gravitate towards earlier historical periods of time to continue his stuff. He may be pretty much an idiot, but he is effective!

Bonuses and Limitations:
Acrobatics has the Breakfall bonus (+1).

Drawbacks:
MIA toward Ripping off his sleeves.

Source of Character: Jetpack Deluxe, Age of Zombies (excluding Monster Dash, which looks like a lot of fun!) games. 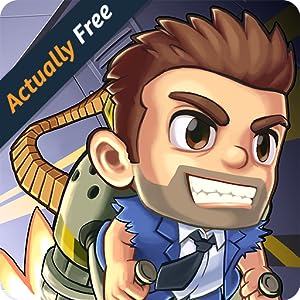 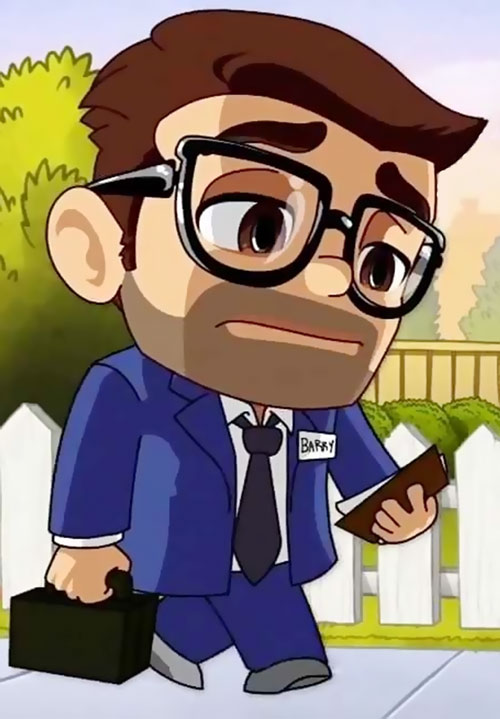