The Alpha-Stone transformed the Basilisk, granting him slightly superhuman strength, superhuman toughness, endurance and durability (including a very dense skin of lizard-like toughness) and an increase in mental attributes.

His major power was the ability to generate microwaves, and to accelerate or decelerate molecular motion with his gaze. This gives him heat vision, cold vision, and the ability to fly by super-heating ambient air and using the raw force of his eye beams to propel himself.

The Omega-Stone later increased his power, refined his flight abilities (he no longer required constant eye beams to repel himself from the ground) and gave him psionic abilities, such as the telekinetic control of tectonic activity and teleportation abilities sufficient to span the distance from New York to the Antarctic.

The Basilisk’s abilities are vast, and he’s intelligent enough to use them to a good proportion of their potential. After being exposed to the Omega Stone, he caught the Martian Manhunter’s syndrome – exhibiting super-powers as needed to advance the plot which were then quickly forgotten.

Thus he once used — in DC Heroes RPG terms — the Vampirism power, and once Matter Manipulation. But it seems to be borne more of artistic license than rigorous continuity and I’ve disregarded the two incidents.

A note about Basilisk’s cold vision. The Basilisk does not seem able to generate huge quantities of ice, and the ice he generates is not supercooled enough to kill even an unprotected average human (death through lack of air is more likely). However, he’s been able to slow down the Thing himself for a bit by encasing him in ice.

Basil Elks was a convicted burglar of little note, who was ridiculed and nicknamed “Basilisk” by the other inmates. Being too much of a loser to live a normal life, he attempted a theft in a museum soon after he got out of prison, and botched it by happening on a guard.

The guard shot at Elks, but hit the giant gemstone that Elks had come to steal. Unknown to all, the stone was actually a Kree power object, called the Alpha-Stone. The explosion bathed Elks in radiations, and mutated him into the Basilisk, a creature that could indeed kill with is gaze.

The Basilisk discovered that there was another Kree stone on Earth, the Omega-Stone, which could augment his powers further ; however he ran afoul of Spider-Man and Captain Mar-Vell when he attempted to locate it. The protagonists found the Omega-Stone, and the fight continued underground in the realms of the Mole Man. The Basilisk made a desperate dash at the Omega-Stone, but was engulfed in molten lava.

(For more about these stones, you can read our Karla Sofen entries and our Ulysses Bloodstone profile.)

However, the Stone protected him, and he survived with enhanced powers. 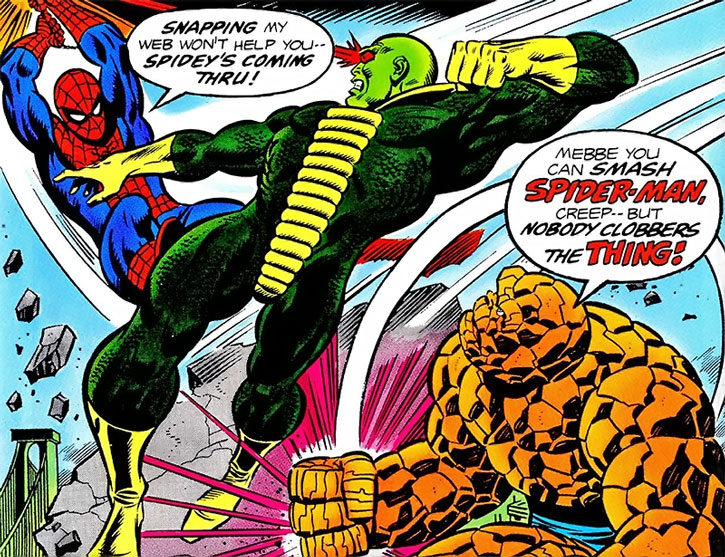 The Basilisk later raised a volcano in the Savage Land, intending to start a volcanic chain reaction that would ruin the Earth. He was opposed by the Thing, and during the fight both teleported to the New York bay, where the Basilisk had caused another volcano to rise. The Thing and Spider-Man beat him. Elks fell inside the volcano, his out-of-control eye beams pulverizing the rock around him and burying him.

He later managed to escape his subterranean prison, but was killed immediately after by the Scourge of the Underworld. Given his constitution, it is, however, possible that he survived the seemingly mortal wound.

The Basilisk has a light green skin with burning, bulging red eyes. He wears a dark green, slightly scaly costume with pale yellow gloves, boots, collar and a pale yellow band in the middle of his torso.

The Basilisk was a loser, and was ridiculed by other criminals. He’s thus quite insecure, and avenges himself on the world for not having taking him seriously enough when he was human. He lusts after power, as it allows him to make the world acknowledge him even if it means destroying large parts of it.

Given his insecurities, he resents those who oppose him as a sort of symbol for injustice. From there he develops monomaniacal obsessions with destroying such persons.

The Basilisk has a good number of big red buttons that are easy to push, modelled by his IAs in the game stats. As seen in his history, those IAs are strong enough for him to jump into magma or keep blasting and collapsing rock around him even when it’s obvious he has very little chance of hitting his foes.

The Basilisk tends to spent most of his Hero Points  on Last Ditch Defense.

While he’s interesting, Basilisk is just a minor villain. He would make a good opponent for the old Firestorm or Metamorpho.

Bonuses and Limitations:
Ice production can only be used for the “trapping a target in a block of ice” maneuver (-6).

Drawbacks:
MIA to Power Lust, MIH of being ridiculed, SIH of those who opposed him (Spider-Man, Captain Mar-vell, the Thing), Strange Appearance, Uncertainty.

Before acquiring the Omega Stone Basilisk did not have his Geoforce Array or Teleportation. His Whirlwind Flight power was an Alternate Effect of Microwave Beam. 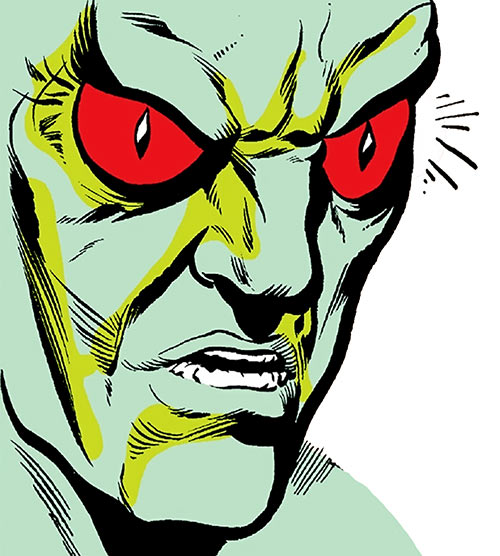 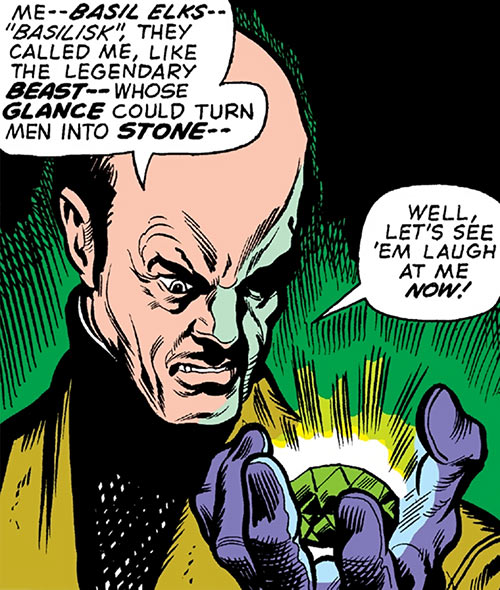