Albeit still a teenager, Bat-Girl is a natural acrobat with a sharp mind. She has received training in combat and detective work from her aunt Batwoman – but even before that she was amazingly agile and deductive.

Like Robin, her physical prowess is impossibly out of proportion with her age. And like most comic book acrobats, she can routinely make leaps that would be impossible in the real world.

Bat-Girl could pilot whirly-bats, and drive her bat-scooter or a truck.

Beyond her grapple and bat-line, Bat-Girl’s carries a “crime compact” that includes :

Betty Kane is the teenaged niece of Batwoman (Kathy Kane). She was unaware of her aunt’s dual identity, until she popped up in Gotham City for an extended visit.

Betty stumbled across clues that led her to deduce Batwoman’s identity. As a result, she became determined to join her in crime fighting. Betty created an appropriate costume and weapons, and secretly followed Batwoman on one of her nightly patrols.

When Batwoman, Batman, and Robin were captured by the Cobra Gang, Bat-Girl made a sudden appearance and rescued them. When Batwoman returned to her Bat-Cave, Betty revealed her identity and insisted on becoming Batwoman’s partner.

Batwoman tried to discourage and stall Betty by having her undergo a lengthy training process. But Betty grew impatient and decided to “prove herself” by capturing the Cobra Gang on her own. Bat-Girl did manage to track the crooks down, but they quickly captured her.

Though trapped, Bat-Girl found a way to signal Batman, Robin, and Batwoman for help. She considerably helped in the subsequent battle with the Cobra Gang. On the basis of her performance, Batwoman agreed to take her on as a partner. From then on, whenever Betty visited Gotham City, she would also fight crime as Bat-Girl.

Bat-Girl had a big crush on Robin from the moment they met. She was much more aggressive in her romantic pursuit than her aunt was towards Batman. Sometimes she would literally throw herself into Robin’s arms.

Robin found her attentions embarrassing at first, but slowly started returning her affection. This became more marked after Batman gave tacit approval to their relationship. The earliest attempts Bat-Girl made to impress Robin were secretly assisted by Bat-Mite, but we don’t talk about Bat-Mite. 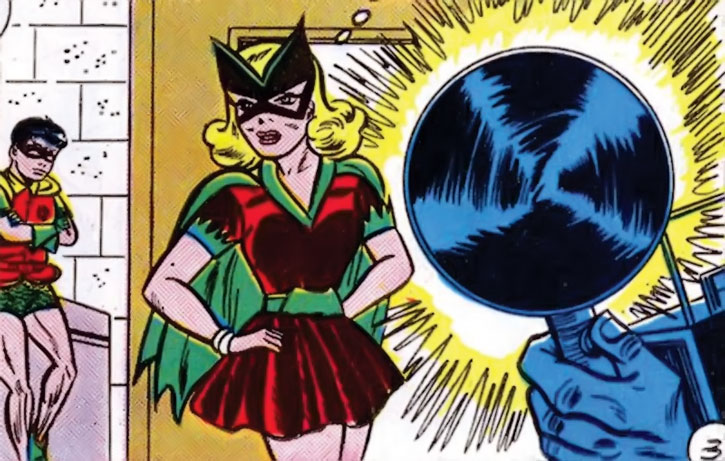 Bat-Girl also helped Batwoman and the Dynamic Duo defeat the Moth. The career of this obscure criminal (no relation to Killer Moth) was apparently ruined by being punched out in public by a teenage girl.

Batwoman and Batman feared that the Moth would try to get his revenge by killing Bat-Girl. Thus, they had Robin try to talk her into abandoning her costumed identity. That did not work, and she insisted on confronting the Moth, saving Batwoman and Batman who had been captured. Bat-Girl immediately reconciled with Robin after the adults told her it was their idea.

Batman, Batwoman, Robin and Bat-Girl then attempted to stop an alien thief named Karn. However, Karn used his weapon to send Bat-Girl, Robin and half of Batwoman and Batman’s life force to his alien world. Bat-Girl and Robin survived on this world and even foiled the plot of Karn’s allies there. During this… strange adventure, they shared a kiss.

Betty would return to Gotham and her aunt Kathy during holidays, eager to adventure as Bat-Girl in Robin’s company. During one such stay in Gotham she and her aunt helped Batman and Robin capture the Joker, using “whirly-bat” flying vehicles provided by Batman. During this case Bat-Girl was also thrown off a railroad car by Clayface, but to her delight Robin caught her.

Bat-Girl later played a minor role helping Robin restore Batman, who had been turned into a bat-genie by a magic lamp.

Eventually, Kathy and Betty Kane both retired from crime-fighting. Betty grew up to become a top-rated professional tennis player. Meanwhile, back in Gotham, Barbara Gordon developed the almost-similarly-named Batgirl identity.

In 1977, Ms. Kane was giving an exhibition match aboard an U.S. Navy aircraft carrier. The ship was lifted out of the water with all hands aboard. This was the result of a plot by Mr. Esper hijacking the psionic powers of Lilith Clay, a former Teen Titan.

Bat-Girl had been considering becoming active again since Batwoman had briefly come out of retirement. As a result, she was carrying her equipment. Along with Hawk (Hank Hall, a sailor aboard the carrier) she helped the crew, then Changeling (Gar Logan) and Golden Eagle (Charley Parker) helped get the ship back in the water.

This incident resulted in the creation of Titans West. The other three members were Lilith, her lover Gnarrk, and Dove (Don Hall). The two Titan teams soon worked together to stop Mr. Esper, and Bat-Girl leapt at the opportunity to work with Robin again.

Bat-Girl was briefly glimpsed in action in 1978 in Hawaii, when a beauty pageant was attacked by the “Five-in-one Foe” in his Laser-Razer identity. Laser-Razer defeated her, however.

In 1985, Golden Eagle and Bat-Girl probed for interest in recreating Titans West during the marriage of Terry Long and Donna Troy. The results were inconclusive, and the Crisis on Infinite Earth soon erased Bat-Girl from the universe.

Bat-Girl is a typical Batman character from the first half of the 1960s. Back then these books were ailing and slowly approaching cancellation. She was chiefly seen during an era when the Batman book were aping the much more successful Superman books. At this point editor Mort Weisinger  was deploying a whirlwind of gimmicky, almost surreal stories to save the book.

This sort of stories seemed even more absurd when starring Batman. The book was only saved by a sharp turn toward grittier, less camp stories in 1964 at Julie Schwarz’s  initiative.

(Batwoman and Bat-Girl were famously introduced to deflect charges of Batman and Robin not being heterosexual. But amusingly, the stories often depict both men as being remarkably intimidated by the advances of their female counterparts.) 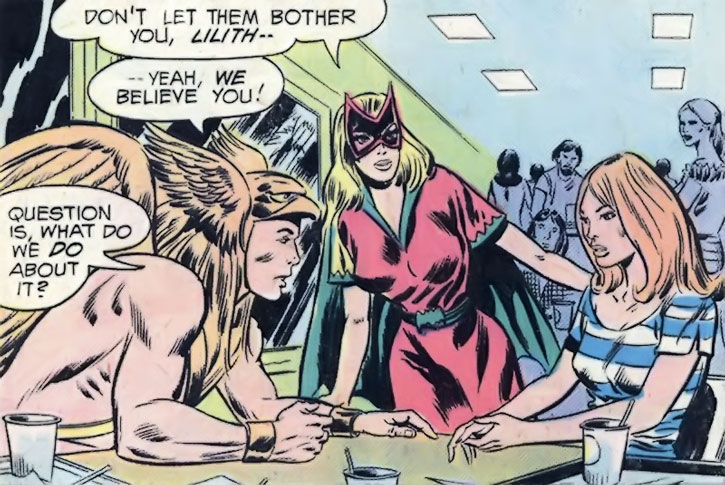 In a 1964 “imaginary story” (aren’t they all ?), Betty leaves to accompany her father on business in Europe for years. She comes back to Gotham in her 20s. Batman married Batwoman and retired to let Dick Grayson become Batman II and Bruce Jr. becomes Robin II.

Bat-Girl popped back in 1977, but this attempt to revive the Teen Titans quickly fizzled. Post-Crisis she was partially reinvented as a very minor character called Flamebird. This was a Silver Age joke/reference about the Nightwing and Flamebird identities once used by Superman and Jimmy Olsen.

Flamebird (Mary Elizabeth Kane), though analogous, is a different character. She never was Bat-Girl – and she didn’t have an aunt Kathy since Batwoman (Kathy Kane) was assumed not to have existed post-Crisis. Flamebird can’t thus really be called the post-Crisis Bat-Girl. Except that, in 2010…

In 2010, Greg Rucka sort-of reintroduces Bat-Girl, as Flamebird starts working as Batwoman (Katherine Rebecca Kane)’s sidekick. This is however swiftly undone by editorial vagaries and the New 52 reboot.

The more surreal adventures, however, are presented as shared visions induced by exposure to experimental drugs. The drug angle actually builds on a 1963 Batman story.

In this framework many “Weisinger Age” stories implicitly happened. It is stated several times that during an indistinct era early in Batman and Robin’s career, things were more colourful and light-hearted.

The events surrounding this new version of the Silver Age Batwoman (now called Katherine Webb-Kane) are roughly similar to the Silver Age stories. Her characterisation, however, is markedly different. But she does show up with a sidekick once – which means that there was a Bat-Girl somewhere in the past career of Batman after all.

Robin mentioned that this Bat-Girl (whose uniform is more closely patterned after his) was trying to woo him like in the 1960s stories.

Whether there is a link between this Bat-Girl and Flamebird is unknown.

In which continuity did this Bat-Girl appear ? We have no idea. As of this writing Batman Incorporated cannot possibly make sense in DC’s New 52 continuity.

Betty is a pretty teenager with shoulder-length blonde hair. As Bat-Girl, she wears a short-sleeved red dress trimmed in green, with a green cape, belt, and boots and a pointed red mask. She carries a small purse-like “Crime Compact” slung over her shoulder.

Bat-Girl is bright and enthusiastic, with a good eye for clues. For the most part she is serious and dedicated to her job, but sometimes she lets her emotions get the better of her (especially where Robin is concerned). A favourite trick is to pretend to faint or to act helpless in order to catch the bad guys by surprise.

Bat-Girl is quite stubborn, wants to prove herself, or is very attracted toward Robin. However she is more mature emotionally than he is, as per the gender roles of the day, and he initially reacts to her advances like a scared little boy.

They later start sort-of-dating, but that never got anywhere since Betty did not usually live in Gotham. Plus, both characters existed in a strange limbo somewhere between age 12 and age 15 while having many of the capabilities of an adult.

Bat-Girl received basically no character development or backstory during her entire career.

“Don’t worry everybody ! Bat-Girl will take care of him !”

(Examining clues with a microscope) “Cellulose acetate ! I read about it in school ! That’s used in the manufacture of gunpowder, rayon and other products !”

(This section is about the version of Bat-Girl that exists in the homemade universe of our contributor Azrael.)

In Universe AZ, on the “Earth 1” of the setting, Betty Kane is known as Flamebird as she is in post-crisis DC comics. However she is significantly more skilled and capable (also she does not carry “girlie” gadgets). Betty is the grand-niece of Martha Wayne, a member of the prominent Californian Kane family, and an accomplished professional tennis player in her civilian ID.

Born in 1964 (a year after Dick Grayson) her career started in 1979, after her mother had brought her to Gotham to visit Bruce, and she accidentally discovered his identity. She mostly trained alone, though after Barbara was paralyzed (1986) Batman had Betty assume the Batgirl identity for close to 2 years to prevent any possible correlation between Batgirl and Barbara.

Betty has since become a member of the International Super Teams organization, she is considered an extremely valuable asset by the head of the organization Silver Lightning (Dimitra Poulis), and she has been romantically linked to Red Arrow aka Connor Hawke, one of her “aunt Kathy’s” teammates.

Betty did not originally have an “aunt Kathy”, until after the Crisis in 1985, when the alternate universe daughter of Batman and Catwoman (Helena Wayne) came to Earth 1 following the destruction of Earth 2. Bruce helped Helena set up a new identity for herself as Kathy Kane.

She became Batwoman in the early 90s, and is currently a member of the Justice League branch team on the planet Oa, as well as being the local head of Wayne Enterprises (also on Oa). 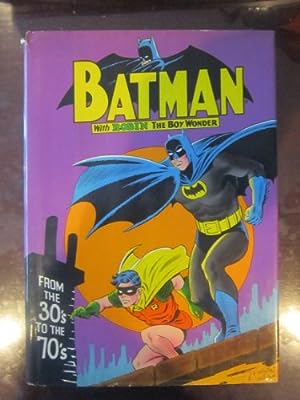 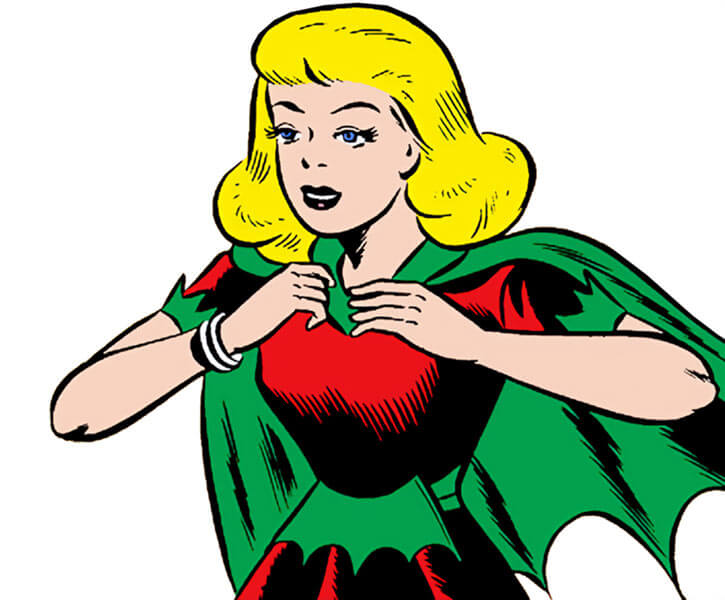 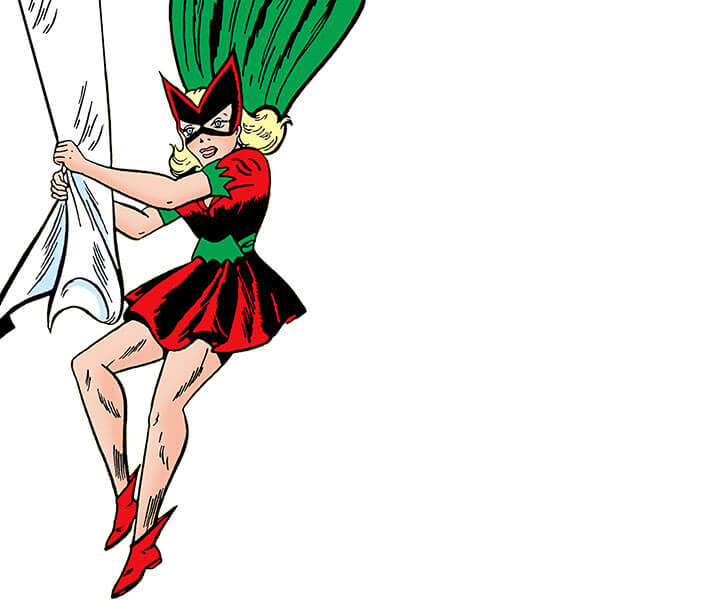 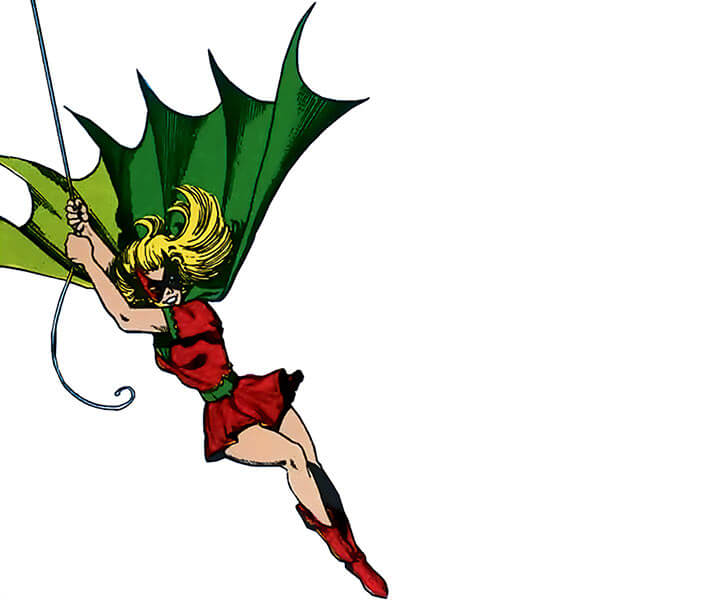 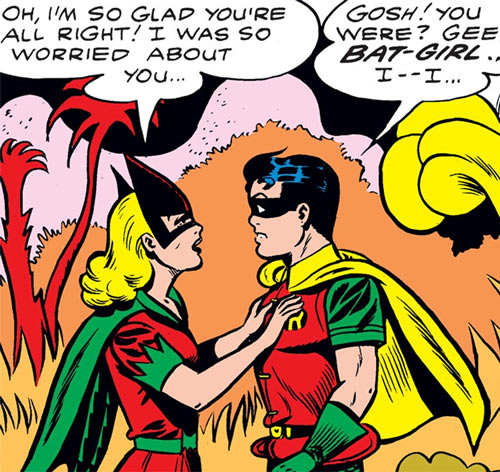 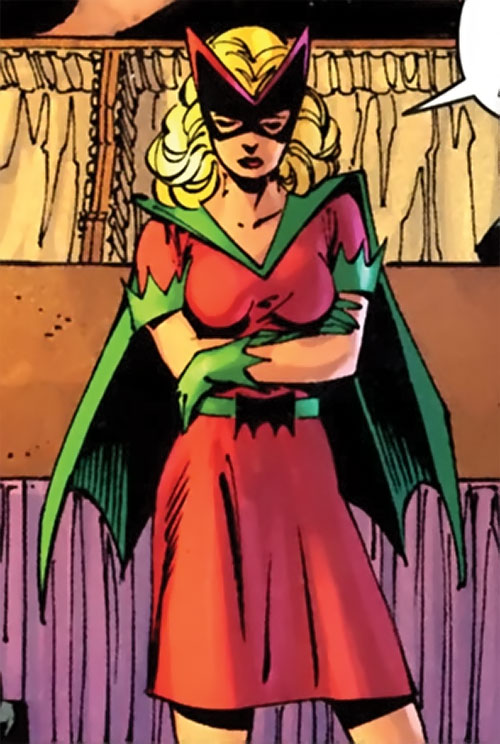 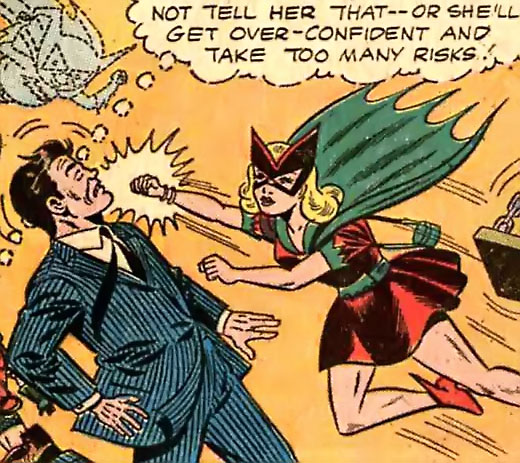 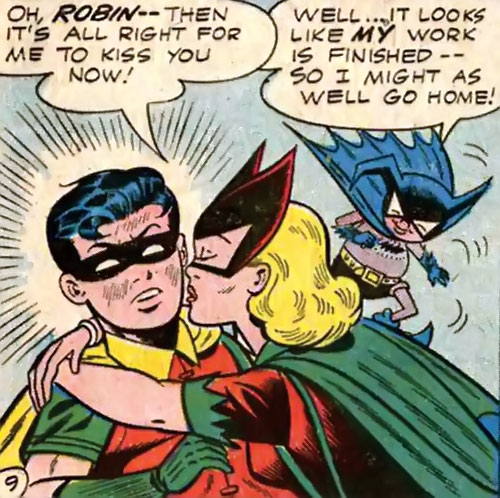 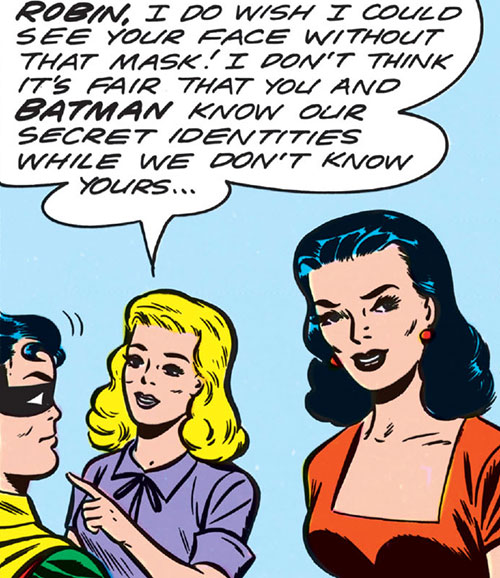 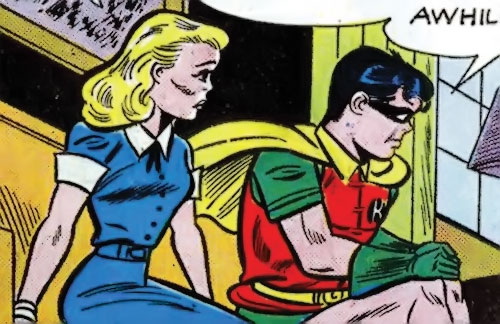 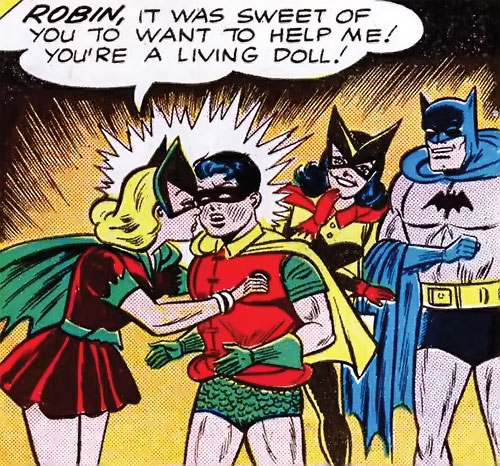 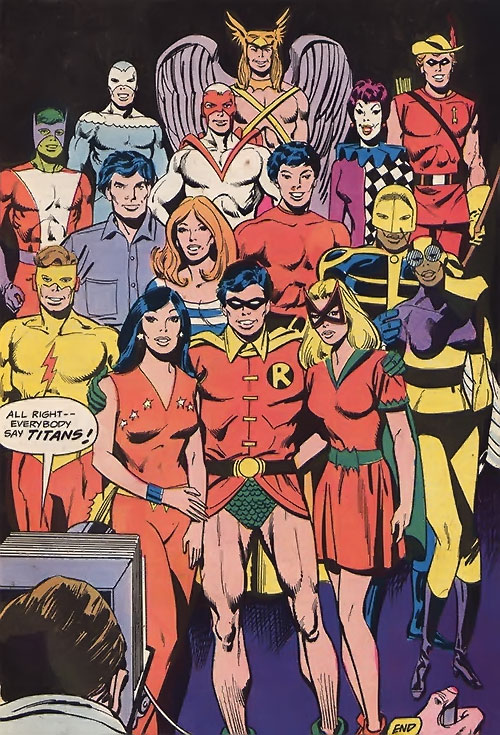 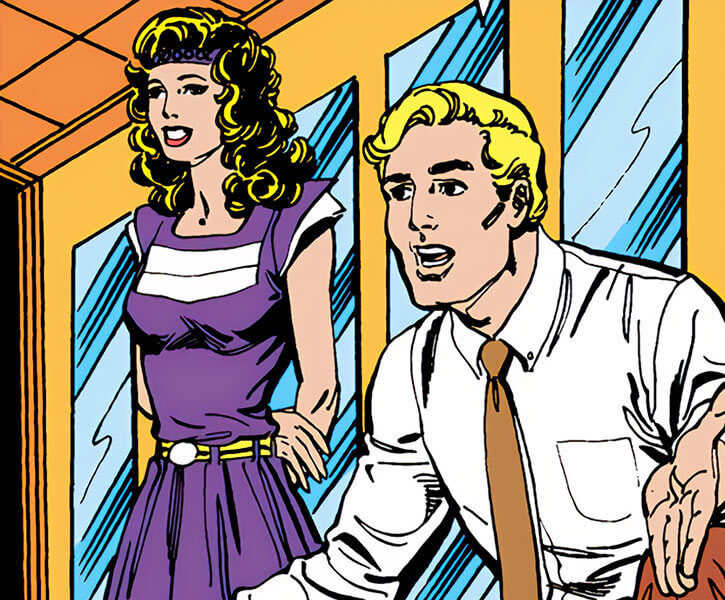