No, this guy has nothing to do with Batman.

In fact, his profile should be read after the Rancor character profile, which explains it all.

Bat-Wing can fly, and fire blasts of energy from his hands.

The mutants left Earth to avoid persecution, just prior the Martian invasion in the 20th Century. This exodus led them to a habitable planet they named Haven.

Over time the number of mutants dwindled. More and more of the births resulted in baseline humans. Eventually, the nine remaining mutants became an elite ruling over the humans with an iron hand. Rancor was the undisputed leader of the mutants.

A resistance developed among the humans. After the mutants finally tracked them down, they discovered that one of their own, Bear, was collaborating with them. They killed Bear and the other resistance members they found at the meeting.

Then came the Guardians of the Galaxy. These had just located Haven while searching for the long-lost mutants.

Rancor and her lieutenants were suspicious of the newcomers but met with a few of them. When they discovered that other Guardians were meeting with the underground resistance, Rancor attacked them. She ordered the mutants to put down the revolting humans.

Realising there was little chance of victory, with the new Phoenix host being empowered, Rancor detonated bombs to destroy the planet. She thought that if she couldn’t rule haven, no one could. She led the mutants to safety, while the Guardians helped the humans escape to safety on Main Frame’s world.

The mutants followed Rancor as she began a quest to discover what had happened to her ancestor, Logan. In a museum near the former Shi’ar Empire, they discovered one of his broken claws on display. Rancor took it. 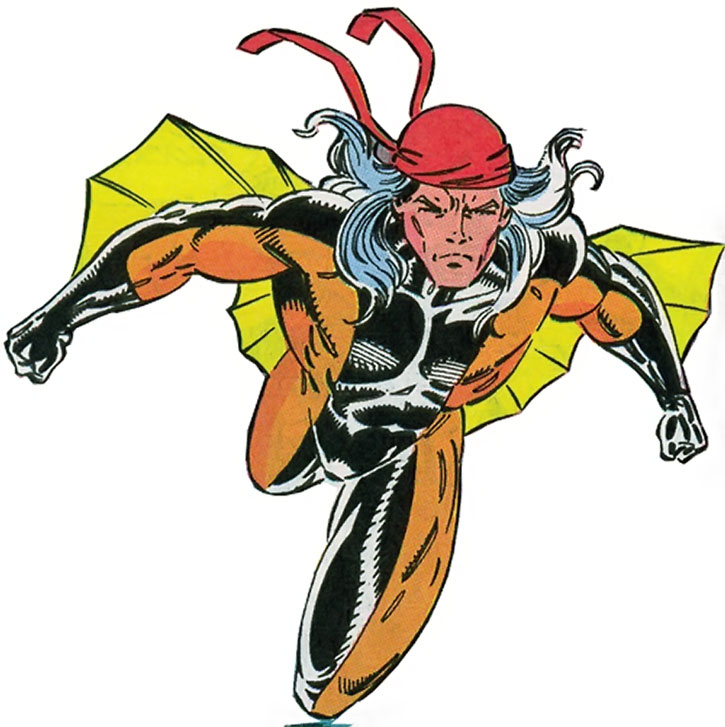 The search led them then to Earth. There they again came into conflict with the Guardians, with Rancor battling Talon.

But they were kidnapped by Doctor Doom. He forced their obedience, causing violent resentment in Rancor, who took some time to realize she couldn’t easily kill him. Bat-Wing was especially put out by their servitude, once even shouting at Rancor. This only happened once, however, as she scalped him for the outburst. He thereafter took to wearing a bandana to cover it up.

They worked for Doom for a while, again coming into conflict with the Guardians. Then Rancor used surprise to attack Doom.

The battle was close at times, but ultimately the Guardians won, capturing the mutants. While it initially appeared that Rancor had won, Doom soon rose. He revealed that his body had long gone. His brain was kept in a cyborg body which included the adamantium  skeleton he’d taken from Logan, encasing Victor von Doom’s brain.

Rancor survived the fight due to the intervention of the Guardian, Yellowjacket. She escaped Guardian custody, stealing their med-shuttle, and freeing her Lieutenants.

Learning that the Inhumans had recently been abandoned by their dictator, Loki, they took advantage of it by enslaving them. Rancor’s crew loaded them onto a spaceship they forced them to build, setting off in search of a new homeworld. They found one, naming it Haven II, where they set the Inhumans to work building for them.

While the Guardians were off their ship, Rancor dispatched Sidestep, who, aided by Mindscan, teleported onto it. She set it up to gas the Guardians unconscious when they returned to it.

The trap worked. The unconscious Guardians were transported to Haven II, where they were set against individual mutants. Bat-Wing was pitted against Vance Astro, who easily beat him.

The Guardians were eventually teleported away by Talon.

Vicious and loud, Bat-Wing enjoys using his powers, especially to kill, and lording it over those weaker than him.

He’s very mouthy, once even lashing out verbally at Rancor, which resulted in her scalping him. As a result of this he now usually wears a bandana.

“Struggle, human, fight! I intend to make your death a painful one… starting with your eyes !”

A number of the more powerful escaped, but the others were left. When events on Earth caused the influx of new “immigrants”, they were completely isolated. A society developed with the super-powered becoming the ruling class, and this continued down the centuries, even as the numbers of the powered diminished.

When they were eventually contacted by the UP, the rulers violently rebuffed offers to return to Earth, despite the normals among them wanting to leave.

When the rebellion got out a request for help, the UP sent a squad of Legionnaires, who deposed Rancor and her lieutenants, the surviving members of whom escaped. The two groups have clashed further, as Rancor has led the mutants in searching for another planet to dominate.