While Batboy has no super powers, he always seems to have luck on his side. In game terms the dice always seemed to come threw for him in the worst pinch, best personal roll was a 65. Some would call this Probability Control, but if it is the player has it, not the Character.

During his early years Bat boy would compare his fighting ability to Robin, and later Nightwing. Once he surpassed them he now compares himself to the Batman. At this level, Batboy’s martial arts prowess makes him one of the top hand-to-hand fighters in the world.

He can stand toe to toe with the likes of the Batman having developed many of his own fighting techniques including the Snap, Whirl, Twirl (which I always imagined looked a lot like Ryu’s Tornado Whirlwind kick), this is a modified leaping roundhouse kick, in which Batboy takes to the air and spins a full 360 degrees.

Two fingers is a technique in which Batboy quickly jabs the temples or side of the neck of his opponent, usually dropping them with the attack.

A theme for Batboy throughout his career has been his very strong desire to be just like Batman. Following this dream he bought a Mansion and hired a butler by the name of Albert Nickleworth. This mansion sat over a large network of caves which he aptly named the Batcave.

Then he set about building the many gadgets so he could be just like The Batman. From Batman’s patented Batarang to the Batmobile.

Batboy worked with his intimate knowledge of Batman to come up with near identical equipment. He built his first Batmobile at the age of 15. Howbeit, it was little more than an old jalopy from the junkyard with a yellow bat symbol painted on the side. He and his side-kick, Birdie, then 13, would dash out and drive away (at a moderate speed, since neither could drive) to fight crime.

Batboy has visited Gotham on many occasions. He was mentored by the Batman himself for a short time. Batboy even wore the cape and cowl for a short stint as Batman while Bruce’s back was broken.

Being Just like Batman comes with a price too. He became a target for some of Batman’s own villains. That includes the Joker, who nearly killed him at their first meeting – Joker venom is nasty stuff. Batboy’s decisions have been swayed on many occasions because in his mind Batman would/wouldn’t do this (Rolling against a Catastrophic Irrational Attraction is hard to overcome).

Cliff Vaughn was a Gotham City orphan, and a ward of the state. He liked reading the stories about his hero Batman. Bruce Wayne was the only real father figure in his life, although he didn’t know Bruce’s secret and had never met Batman.

The turning point in his life was at an early age Cliff had turned to petty crime. The Batman stopped him, and he thought, “Wow, I want to be like him”. After this Bruce made sure he was available to the young boy and took him under his wing.

When Cliff turned 14 he came into a large sum of money. This could have been in part to his friend Bruce Wayne (whom Cliff eventually learned is Batman). Bruce hired someone to help him with investing his money in a new computer company. Cliff has since prospered greatly because of it.

After buying the mansion and setting up the Batcave, Cliff was off and running with his new bat motif. He built most of his equipment himself. As a consequence, he started his career as Batboy with only a Batarang and Batline. He set out on his own and began his career in Midway City. Always keeping in touch with Bruce, but at a distance.

Later, he met and joined up with Beangle, another Midway city hero. There first meeting they fought one another. But it was quickly reconciled and each has become close friends.

Batboy spent years fighting the seemingly never ending stream of villains that poured into Midway. Batboy teamed with other heroes in Midway, such as Hawkman and Hawkwoman.

Furthermore, S.T.A.R. labs worked with many youths in experimentation of super powers. Each time a new youth was found with powers or *ahem* created by S.T.A.R. Labs they were handed over to Batboy for training. Batboy named the group of teen supers the Young Justice League. Batman had the Outsiders didn’t he?

The team then journeyed to space where he and Beangle rescued Dr. Back from a tyrant called Nuklon the SuperNova. Dr. Back was, at that time, going simply by The Scientist. The Scientist was grateful for his rescue and joined Batboy’s crusade as his personal gadgeteer.

Dr. Back became instrumental in creating much of Batboys Bat-equipment, as well as helping out other members of the team with their equipment needs. In trade, Batboy financed Back’s own studies even getting a satellite into orbit.

One of Batboy’s enemies was a biker gang leader calling himself the Executioner. The Executioner has a Kryptonian  background, making him immensely mighty and nigh-indestructible. Batboy defeated him by exploiting Kryptonian’s weakness to magic.

Many other villains and Villainous groups including:

Batboy has dimension -jumped a lot in his life as well. During his adventures, he has been to the Marvel Universe on two occasions where he worked with the X-men. He’s been to Ravenloft, Eternia, Marvel’s Limbo, and an alternate universe where heroes were evil.

His last journey was to Earth C where DCs Zoo Crew lived. It is there that he met his fate, while trying to save his universe’s Superman from that universe’s Darkseid…eh, Dogseid.

Batboys Costume is black skin-tight spandex but could be Kevlar or leather. There’s an utility belt that has a Bat-Symbol as the buckle. His costume very much resembles that of Batman’s, with the cape and cowl. However, he has no Bat symbol on his chest.

Cliff Vaughn is driven to be just like the Batman. From the start he emulated the Bat calling himself Batboy and wearing a costume as close to Batman’s as possible. The one thing missing was the emblem on the chest. Batboy never saw himself worthy of having the symbol, and said that he would not wear it until he was worthy.

As he became more of a match for Batman physically, he began focusing on matching his skills.

He is Batman’s ultimate fan. Unlike some, the desire was not to take Batman’s place but to be his copy. Only then could he surpass him.

Batboy is a man of action. He is cool and calculating in battle and easily takes the lead. Batboy has problems taking orders from others though and has even agreed to a course of action only to change the plan mid-stream and go his own way.

“I can feel it.” (readying his patented snap, whirl, twirl)

“…” (holds up two fingers and glowering)

[While on top of the Joker, after a long, frustrating, cat and mouse game, Batboy is pounding him, bouncing his head off the concrete. The Joker had had enough.]
Joker: “Ok, take me back to Arkham, I give up !”
(Batboy says nothing, another punch)
Joker: “Batman always takes me back to Arkham when I give up you idiot !”
Batboy: “I am NOT Bat Man.”

[Batboy steps through a doorway. A thug places a revolver to the back of his head.]
Batboy: “You’ll miss.”

Even though Batboy resides in the DC Universe it would have been an alternate universe. Many things that were canon to DC didn’t occur and others did. For instance, a nuclear explosion went off in downtown Midway City killing over a million people and destroying the economy with lasting effects.

A 1418 points Character without equipment.

Drawbacks:
Secret Identity, Catastrophic Irrational Attraction to being like Batman.

In an attempt to make Batboy more ready for use I have placed his actual equipment here. It doesn’t fall into the category of most conventional super hero equipment and may cause more questions than not. If you are like me, and like things to be used as they actually were, you will find his original equipment below:

Batboy at an early stage in his career)

This section is more for the player and others who knew Batboy through the years, or for those who would like a more light-weight version of the character.

A 766 point Character without equipment.

Equipment:
Similar to his current equipment.

Earliest Batboy that I have

A 705 point Character without equipment

As Batboy was a Player Character and started as a 450 point build with tons of adventures under his belt and time in which he built up Attributes, Skills, etc. through character growth some aspects of the writeup may look odd.

For instance, he has Vehicles and Weaponry; both he could do better unskilled than using the skills purchased. He also has a Military Science rated at 01 AP. This was the last skill to be added before his death.

By Ethan Roe and Cliff Vaughn. 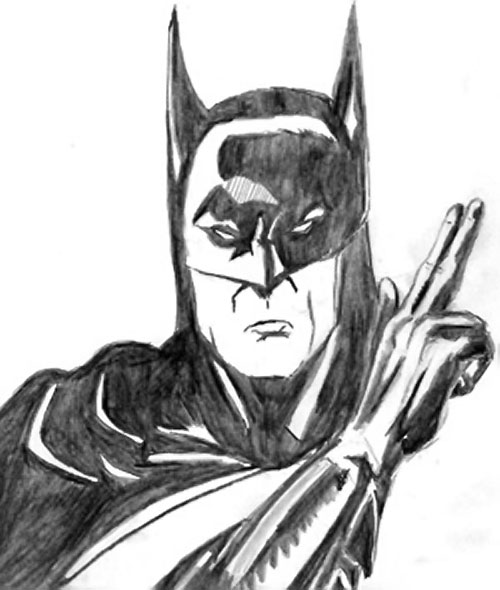 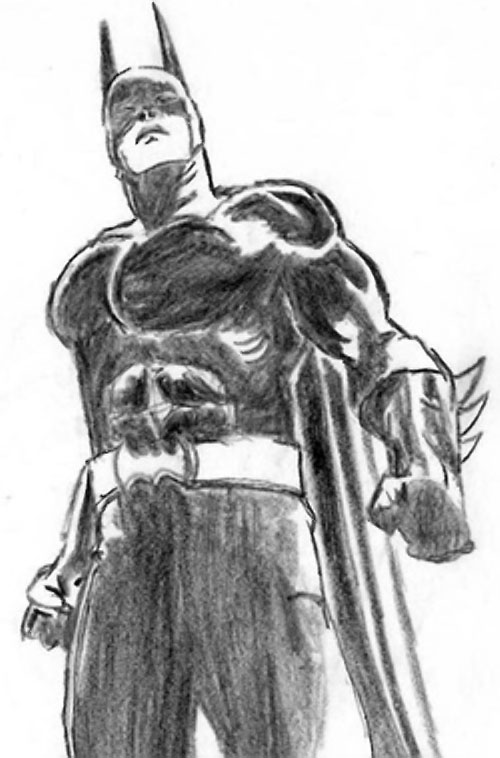