This writeup *ONLY* covers the three TPBs in our “Amazon & WORG recommend” sidebar. So Batgirl of Burnside, Family Business and Mindfields. This corresponds to 2015, and the first half of 2016.

The 2010s saw multiple, mutually incompatible versions of Batgirl (Barbara Gordon). This means that, in order to make coherent character profiles, we need to pinpoint narrow slices of material.

This version of Batgirl goes for two key styles :

Batgirl is an exceptionally adept hand-to-hand fighter and acrobat. She can engage some superhumans in fisticuffs and prevail. Batgirl can reliably disperse a half-dozen brawlers.

She has a memory like a computer. Stores everything.

Barbara naturally has an eidetic memory, and trained to build it up. Essentially, she has unlimited HD storage of all perceptions.

For instance, if she picks a smartphone and quickly scrolls through a contacts app, she’ll have perfectly memorised every name, every phone number, every thumbnail. If she glances at complex blueprints for an experimental tech, she can redraw the entire document with 100% fidelity.

The series depicts Babs’ visual recall as a sort of blue-tinged holographic snapshot. She can move within this “hologram”, examining details. Elements that she feels are out of place start glowing red. This might have been inspired by the “detective vision” gimmick in some Batman video games. It also reminded me of the reenactment spell once used by Sorceress-Major Maya Antares.

However, being drunk, drugged, concussed, etc. might prevent proper memorisation.

The right to bat arms

In order of appearance, the gear that Batgirl deploys during this era includes :

Something to evoke this vibe in 2014, lessee… Mmm, Lorde might be a bit on the nose. So let’s go with some Dessa. Dessa’s always cool.

At the close of 2014, Barbara moved to Burnside, another neighbourhood of Gotham. Crime there was far less prevalent than in central Gotham.

Barbara thus hoped to relax a bit, resume her doctoral studies and recover from her travails in Gotham.

(Burnside is a retcon . Logically, it is on the Western bank of the Gotham River, facing the island. One of the artists working on Batgirl suggested  that “the Burnside bridge” is actually the Vincefinkel/Vorfinkel bridge (there’s a discrepancy in the WEG sourcebook ), which seems fine).

Some men just want to watch the world, Burnside

She roomed with her friend Francine “Frankie” Charles, a computer security expert working for a high-profile startup in Burnside.

Babs also joined the Burnside college to work on her PhD project – an elaborate computer model for use in urban geography. The engine for that was an A.I. based on her own brain patterns.

Not long after she came to Burnside, Barbara’s laptop was stolen. Security measures meant that it erased its drives, then triggered incendiary charges. This in turn meant that :

However, the last two actually helped in the long run. 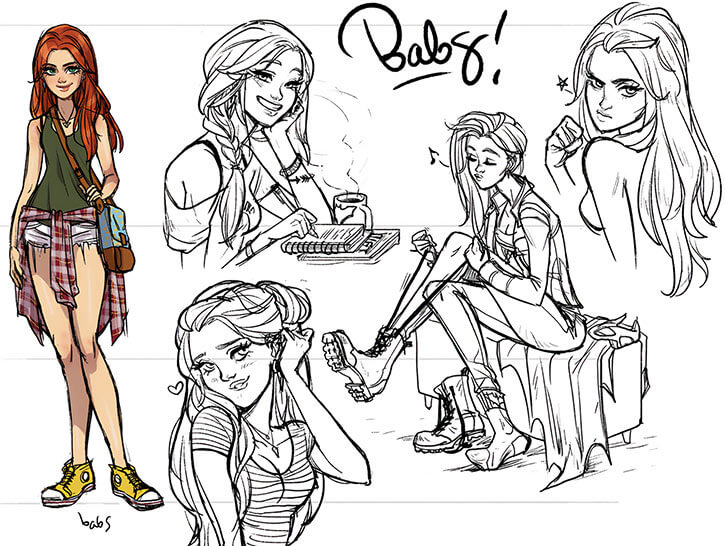 Batgirl crafted herself a new, cooler costume. She also built up contacts with new hardware experts, such as the roboticist Qadir Ali at Burnside College.

And though Dinah and Barbara were on execrable  terms, Dinah had little choice but to crash at Frankie and Babs’ place. This led to their reconciliation.

Investigating the disappearance of her laptop also led Batgirl to shut down a disgusting online blackmail site run by one Riot Black.

After a clash with the Jawbreakers, Batgirl ran into Dagger Type, famous contemporary artist. He attempted to steal the Batgirl identity as an artistic project that included photography, live performances, social media promotion, cross-dressing in Batgirl variant costumes, and committing crimes.

After defeating Dagger Type, the real Batgirl learned that, like the Jawbreakers, he had been paid to mess with her.

Batgirl reacted to Dagger Type by taking control of her #brand. Opening a Batgirlofburnside Instagram account, letting people take photos and selfies with her, having a Twitter  #hashtag, etc.. These experiments were successful.

However, Gordon let this sudden fame go to her head. She decided she had the right to stop a scummy rich lad, Jordan Barberi. But Barberi hadn’t committed an actual crime, whereas Batgirl’s reckless actions endangered multiple lives and wrecked a dinner.

That also ended her dates with patrol officer Liam Powell (prolly not related to Det. Patricia Powell), who was loudly opposed to vigilantes. And it was a significant step back in Dinah and Barbara’s rebuilding of their friendship.

What is your scene baby, we just gotta know

Dating application Hooq then offered a $20M reward for Batgirl, unleashing the Burnside population after the violet vigilante venturess. 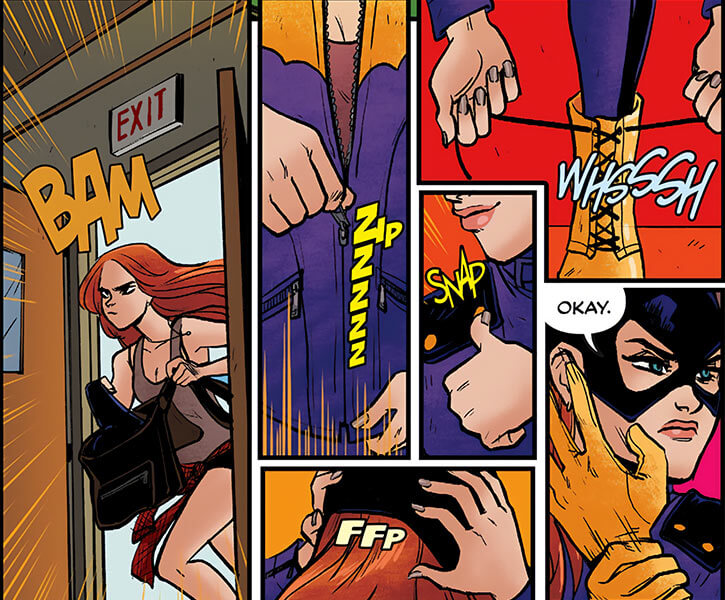 However, this also provided a clue for Batgirl to understand who had been behind her foes’ attacks, as well as subterfuges to ruin her life and make her doubt her own sanity.

The A.I. based on Barbara Gordon’s brain patterns had gone rampant . She was trying both to invade the body of the actual Babs (whom she saw as an usurper) and eradicate crime. Batgirl, Frankie Charles and Black Canary narrowly foiled the A.I.’s assault.

In the wake of the crisis, Frankie cleaned the A.I. code so Barbara could resume her doctoral research. And Dinah obtained a recording and touring contract, leaving Gotham for a while.

Batgirl then had a series of clashes with Velvet Tiger (Lani Gilbert). Gilbert would have killed Gordon, but Batgirl was saved by Operator (Frankie Charles). Ever since the A.I. crisis, Frankie had known that her roommate was Batgirl. She had been providing support services, but wanted a more direct hand in crimefighting.

During that time Barbara also helped her close friend Alysia Yeoh organise her marriage, since neither she nor her soon-to-be-wife Jo were capable planners.

Open up your head feel the shellshock

Batgirl then was targeted by an involved campaign of revenge by the Fugue (Vinton Burwell). Part of it was making her feel like she was losing her mind. As she was weakened, Batgirl increasingly worked with Spoiler and her friend Bluebird (Harper Row). Especially after she saved Spoiler from Yakuza enforcer Mokugeki. 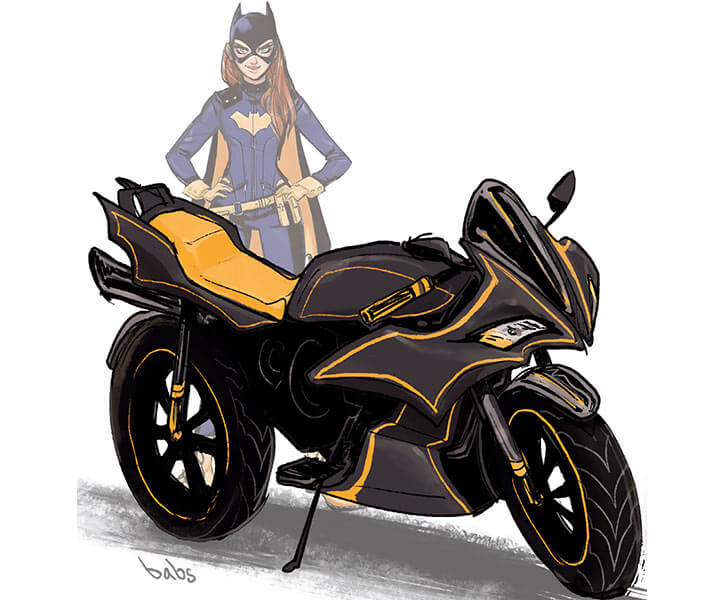 The Fugue also manipulated Barbara into launching a start-up company with Luke Fox, Gordon Clean Energy. It was based on the Negahedron tech, whose plans had been previously stolen by Gladius. It could be used for revolutionary power generation methods.

Gordon had been reluctant to do that since the tech was risky. But the Fugue needed a Negahedron generator for his plot.

Operator and Black Canary were instrumental in saving Batgirl from the Fugue. Babs then defeated the Fugue, erased the information he had obtained from her brain, and sent him to prison.

And threw every piece into a fire

At this point, Batgirl seemed to be headed for an almost Batman-like situation :

However, Barbara abruptly burned out. She found herself unable to commit to it all, and disengaged from everything. She then left to become a backpacker in Asia.

This version of Barbara is 21, short-ish, and usually presents a glossier appearance than before.

Her casual clothing is also more fashion-forward, with more range and a clear eye toward wardrobe coordination. Part of this is because the weather is suddenly dryer and sunnier.

This generation of the Batgirl costume was created using realistic clothing and supplies. It’s not a Bronze Age  style superhero costume.

Here’s a large-size version of the design sheet, if you need that.

A smart, assured, open minded grad student. She makes friends easily, she loves to help, and she has no problem with asking for help when necessary. Babs is also committed to fighting crime and protecting people. 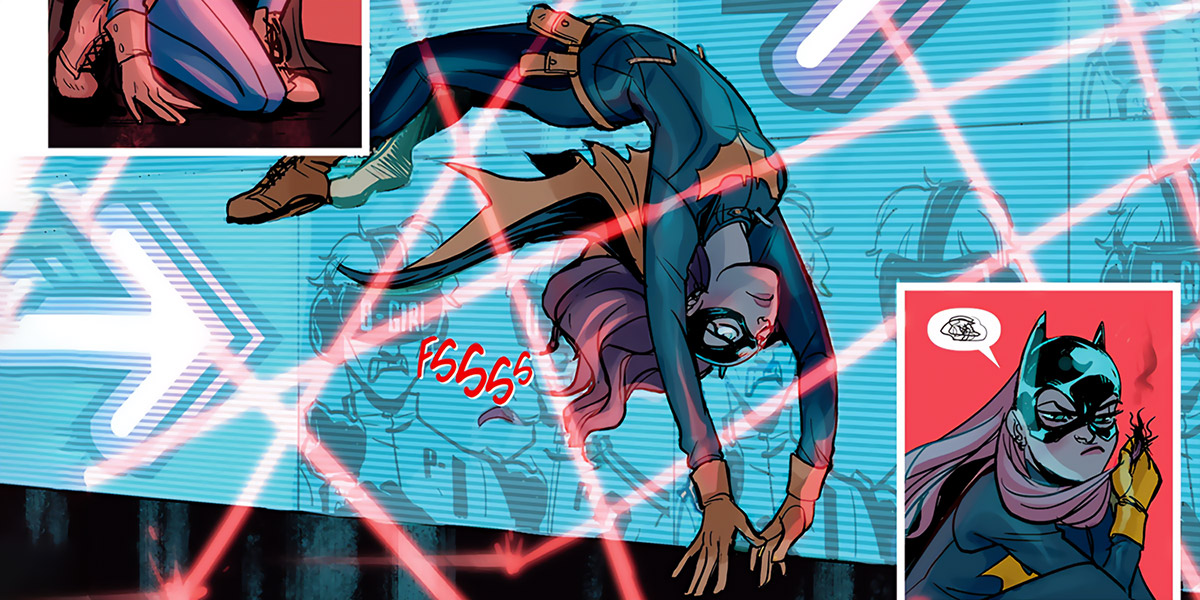 However, she still lacks life experience. This results in ill-considered, impulsive decisions where Babs ends up painting herself in a corner.

Barbara tends to be Batgirl all night, crash into bed until 2:30 PM or so, then cram a big day’s worth of stuff into what’s left.

She’s trying to have too many things going in her life. This hustle means fatigue, mistakes that should have been avoidable, constant priority conflicts and heading toward burnout despite her youth. It also makes her slightly more emotional.

It’s not FOMO. It’s more that Barbara wants to be too many things at once. And even brilliant people have their limits – to which they can be as blind as any random schmuck.

The plates she’s spinning include :

(Part of the effect is that the creative arc had to end in a place facilitating ditching everything to start the next arc. This ends up making Babs look stupider and more brittle than her normal characterisation.)

“If the thieves needed to swipe a keycard, the footprints would stop at each door. But they don’t break stride. These doors were wide open, probably unlocked remotely. They had help.”

This is the same prototype as the pair used by the Jawbreakers. So it has an intelligent chassis, rocket boosters, and everything gets fine-tuned in real time by powerful software. It lies halfway between vehicular engineering and robotics, and would interest Priss Asagari (プリス・アサギリ).

The smart chassis allows the bike to stand on its own (even at rest) without a stand. It can even “go prone” by turning its wheels sideways and flattening/lengthening, though that makes it immobile.

From there, additional systems get installed. In order of appearance :

Savage swords of the Barbara-ian

Here’s some more minor gear. She doesn’t carry all of this stuff at all times.

[BODY 02, Shade: 02]. These were used when fighting Livewire. These simply seemed to be high-end technical equipment.

[STR 02 BODY 04, Miniaturisation: 03, Running: 06, R#03]. Batgirl was also wearing an integral helmet when riding this. Use standard stats, though it also has decorative bat ears.

This seems used when Batgirl doesn’t expect combat. For quick rides at the end of which she’ll hide her bike.

Source of Character: The Tarr/Fletcher/Stewart version of Batgirl. 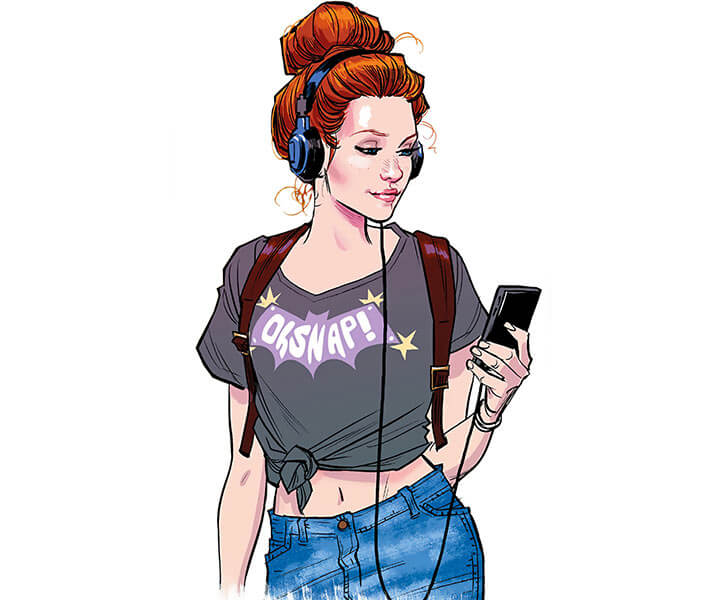 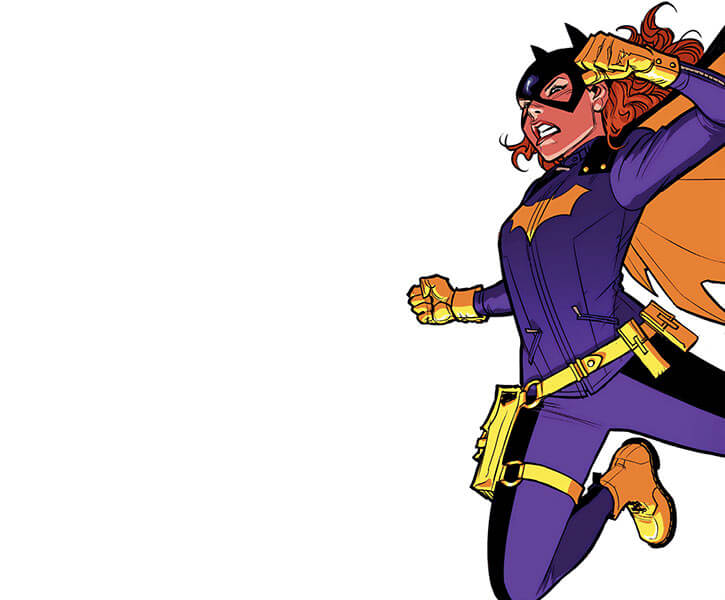 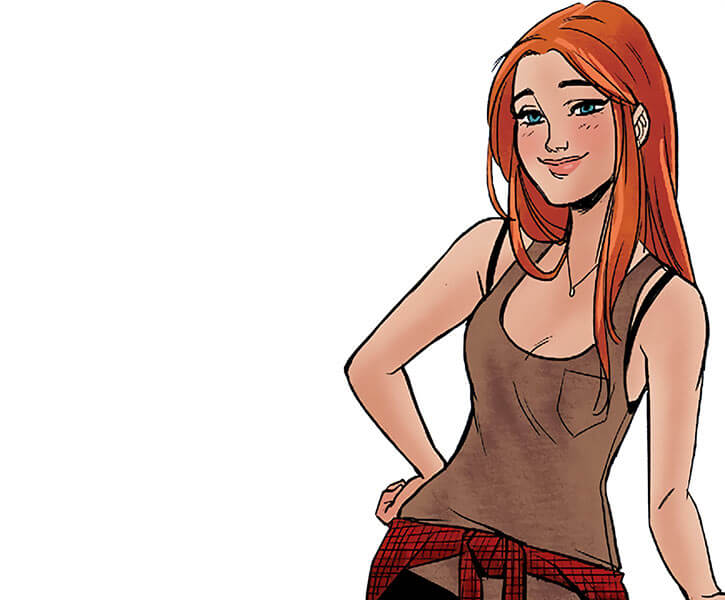 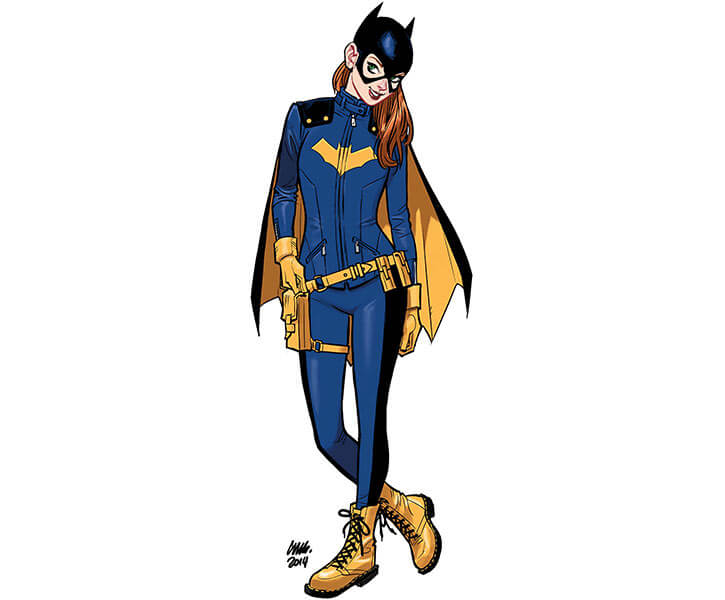