This origin sequence was published two years before Infinite Crisis, which significantly altered reality from its post-Zero Hour state. And thus may have made this account of Babs becoming Batgirl obsolete. Oy, vey.

Our account is thus purposefully limited to what can be observed in Batgirl: Year One.

Barbara was an unusually brilliant student in computer science and data retrieval. She was also trained as a librarian and took pre-law. She finished her Master’s Degree by age 18 — or perhaps even 17.

Babs has apparently been physically training since her mid-teens. Though she only took normal, commercially available classes (particularly in the martial arts) she is clearly athletically gifted. She is :

Between her acrobatics, small size and superior speed, Batgirl excels at evading gunfire.

Somehow, she’s also an excellent motorcyclist, able to do some stunt riding if necessary. She was markedly under Robin (Richard Grayson)’s level of crotch rocket mastery, though.

Barbara also trains as a hacker and intrusion expert, and is capable of defeating common levels of computer security.

Whether this version of Batgirl has a photographic memory is unclear. Upon re-re-re-reading a specific scene it would seem that she does.

Though it is not mentioned, it is likely that the following facts still hold in this version :

Barbara was a brilliant student, skipping multiple years and obtaining various scholarships that supported her through college. After completing her first Master’s Degree, she became the Head Reference Librarian at the Gotham Public Library.

(The GCPL is very much like the New York Public Library  in terms of size and architecture. So we can assume that it too has dozens of millions of physical documents on its mighty, mighty shelves.)

And you, you will be queen

Even as a teenager, the fiery Barbara wanted to become a cop. However, Jim refused to allow his daughter in, presumably out of concern for her safety. Since he was by that point on the short list to make commissioner, he could lock her out of the GCPD. 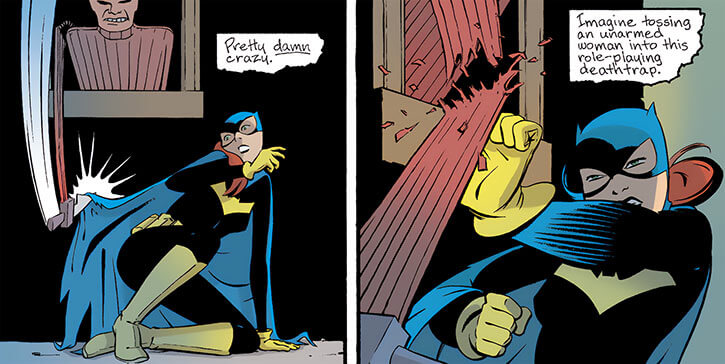 Furthermore, the petite Barbara couldn’t meet the height requirement of local, state or Federal agencies. She was essentially barred from law enforcement.

(In the real world, height restrictions were lifted circa 1983 as being discriminatory. What this implies in terms of timeline for this version of Batgirl is left as an exercise for the reader.)

As she got older and began her career as a librarian, Babs grew even more determined to escape the tedium. She wanted to fight the good fight, and be in the thick of it – not have a boring life.

During her teenage years, Barbara had kept physically training to make it easier to join the police. She even studied for a time under Philip “Dragoncat” Parsons, a shady McDojo owner who later turned out to be a criminal.

As doors closed before her, she heightened her training. She also began dealing with the hacking underworld in Gotham to learn about digital intrusion, social engineering, etc.. Years later, she would considerably up her hacking game by working with Jack Marshall.

This all was meant to facilitate her new plan. Since she was out of better options, she would become a vigilante super-hero, like Batman.

Barbara eventually duplicated her father’s secret access codes to the JSA’s Gotham headquarters. She used them to break in, break out and erase records of having used the codes in the first place. This allowed her to leave a letter for Black Canary (Dinah Lance) of the JLA, asking her to become her apprentice.

However, the JSA did not forward her “application” and Wildcat (Ted Grant) essentially shooed her away when she came back.

As Barbara’s disappointments made her moody and antisocial, Jim gave her an invitation to a big masquerade event in a clumsy attempt to cheer her up. Resenting him, she cattily decided to wear a homemade “Batgirl” costume to the ball.

Barbara had seen several of Jim Gordon’s night-time encounters with the Batman (Bruce Wayne) on the roof of the precinct. Though that stopped when Jim noticed that young Robin (Richard Grayson) was ogling Barbara, she espied at least one further meeting. 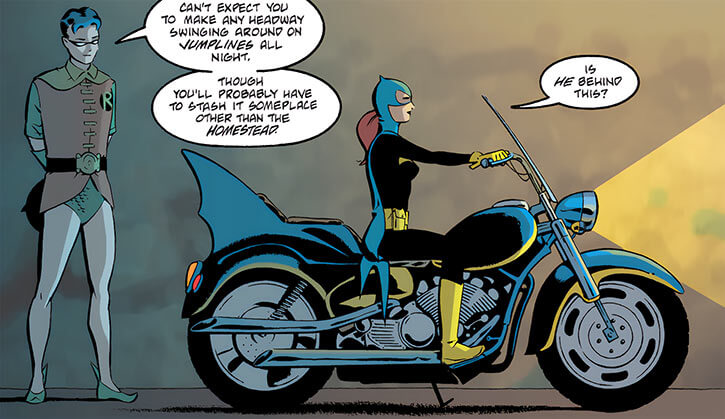 Thus, she knew how uneasy Jim was when working with Batman. Though they were on good terms, the cop felt that needing Batman was a sign of how lacking the GCPD was. The Batgirl disguise was an attempt to rub his face in that.

From captions, it also seems that Barbara intended to demonstrate her skills during the masquerade, to show her father how much he had been underestimating her. Perhaps she wanted to give a surprise acrobatics performance.

What actually happened was that the Killer Moth (Drury Walker) attacked, as part of his plot to kidnap Bruce Wayne.

In her “Batgirl” costume and cowl, Barbara instinctively leapt into action after Killer Moth shot her responding father with a tranq dart. Though the Moth was well-armed and came with pistol-packing henchmen, “Batgirl” repulsed them and forced them to flee. This debacle broke Killer Moth’s modest criminal career.

Barbara was then confronted by Batman and Robin, but managed to flee when Moth opened fire on them all from an helicopter. However, Jim Gordon soon deduced that his daughter likely was Batgirl, though he never mentioned it for lack of a solid proof. Barbara maintained the pretense that he didn’t know.

Nevertheless, Batgirl persisted as a vigilante. She foiled an armed robbery at a corner store by three armed men, and bought some weapons and equipment via mail order. Angrily wanting to prove she was a peer for Batman and Robin, she then attempted super-heroic acrobatics by leaping from a tall building with inappropriate equipment.

She was narrowly saved by the dynamic duo. They took her to the Batcave and eventually shoved her into one of their high-tempo combat simulations, which she narrowly failed.

The goal was to discourage Gordon from acting as a vigilante, but her defiance made it clear that it was impossible. The Dynamic Duo decided to return her home, but then mailed her some basic Batcave equipment. The package included de-cel lines  so she wouldn’t kill herself trying to do super-heroic acrobatics with normal climbing equipment.

Robin kept supporting Batgirl, mostly out of attraction. But Batman’s goal was simply to keep her alive until she’d quit at last. 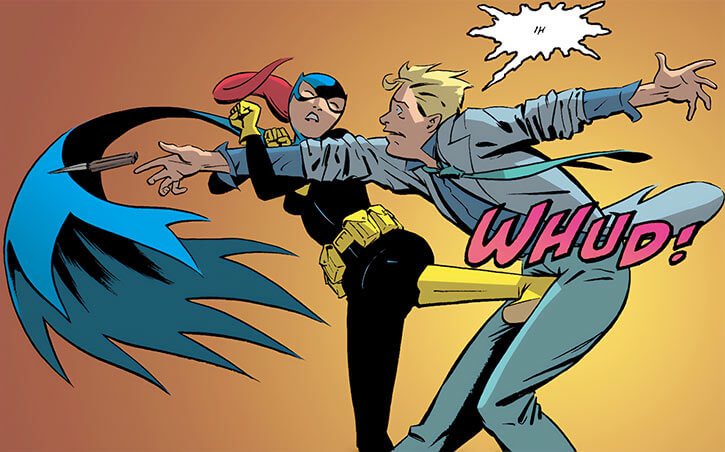 That didn’t work, especially when Batgirl learned that her father was being kidnapped by Killer Moth and Firefly (Garfield Lynns). During this case, Batgirl ended up partnering with Black Canary, who assumed that Batgirl was endorsed by her colleague Batman.

Batgirl later was instrumental in stopping Killer Moth and Firefly. The two were finally arrested by Batman and Robin after attempting to burn the Gotham Central precinct house to the ground.

As a result, Batman decided to fully take her onboard as an authorised vigilante, joining him and Robin when feasible. He revealed his secret identity to her and made her share his oath. Robin then impersonated Batgirl, with Alfred’s coaching and a lightly padded costume, to throw off Lieutenant Gordon’s suspicions.

However, Barbara also broke Richard’s heart for a bit. Though she liked him well enough, she was interested in older men (Robin was but about 17 at that point). Barbara was developing ties with Jason Bard, a former GCPD officer who was partially crippled while protecting her father.

Now that she was a super-heroine and her need for action was assuaged, Barbara started considering her future in a calmer, less obsessive manner. In particular, she started thinking about campaigning for a public office.

This version of Barbara is petite. This is a retcon compared to the immediate post-Crisis Barbara Gordon, who was listed as being 5’11”. The height listed in our Background block is thus eyeballed from the story, as often (she does mention her weight, though).

Her “Batgirl” outfit for the costume party had boots with 2″ heels, one of which broke off in action. The “real” Batgirl costume intended for fighting had flat soles, soon supplemented by high-grip soles from rock-climbing shoes.

This version of Barbara has an aggressive, competitive, confrontational personality.

She chafes under restrictions, the worst one being that as a petite lass she’s not taken seriously and barred from physical action “for her own safety”.

She doesn’t want to be safe – she wants to slug it out, she wants to make herself fearless and she wants to fight crime. And she hates failing at anything. She sometimes ascribes her fighting spirits to her Irish roots.

As she keeps being rejected, Barbara’s anger mounts and she becomes increasingly hostile and in-your-face. She refuses to be fated to a life of tedium. As she runs out of normal possibilities to be an active crime-fighter (such as joining the FBI as a brick agent), she’s forced to become a lone wolf costumed vigilante learning the trade under fire.

She’s a maniac, maniac on the floor

This hostility can make her so bull-headed as to bypass her high intelligence. She’ll become more concerned with proving that she has balls (figuratively speaking) than assessing the situation at hand using her brains. This take on Batgirl is much more about her temper and determination than her high deductive intelligence.

Batgirl is extremely courageous, and even as a beginner she never freezes, panics or gets cold feet. She is not immune to fear, but she is working on getting fearless through experience. Barbara enjoys the adrenaline rush and craves action *now*, but she also realises when she’s in over her head.

Batgirl isn’t really the quipping sort. She’s focused on learning and on doing, and is generally a serious person determined to do serious things. She sometimes does a little nerd humour, but that’s more a result of being part of that subculture than her personal nature.

The socially adept and particularly pretty Barbara has already been through a number of boyfriends, but has yet to find one who meets her high standards. She hopes that Mr. Bard will be the one – but in matters of love she seems more prone to a cerebral approach than to big bursts of romantic emotions.

Advantages:
Credentials (GCPD, Low), Expertise (Librarian), Familiarity (US law fundamentals, Criminology fundamentals, Police culture), Misc.: Babs can get the police discount via her father, which lowers the cost of some specialised equipment (such as ballistic vests) by 1 AP.

Her first set of equipment as Batgirl was mail order gear :

Robin then shipped her the following :

The Credentials represent the fact that GCPD officers don’t mind Jim Gordon’s daughter hanging around in secure areas of the precinct house. She’s part of the tribe, so to speak.

This makes her easy for her to check and even copy confidential police documents. 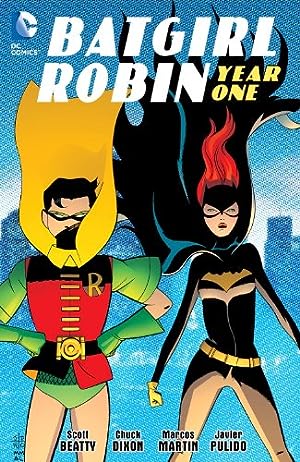 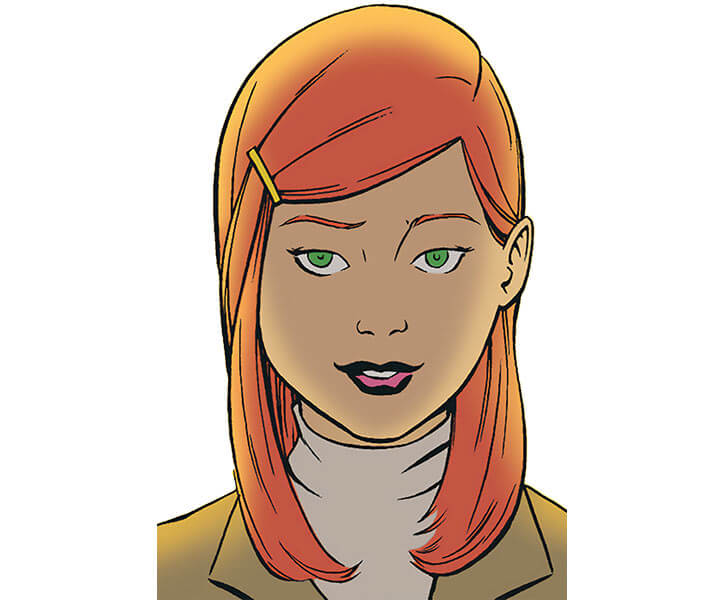 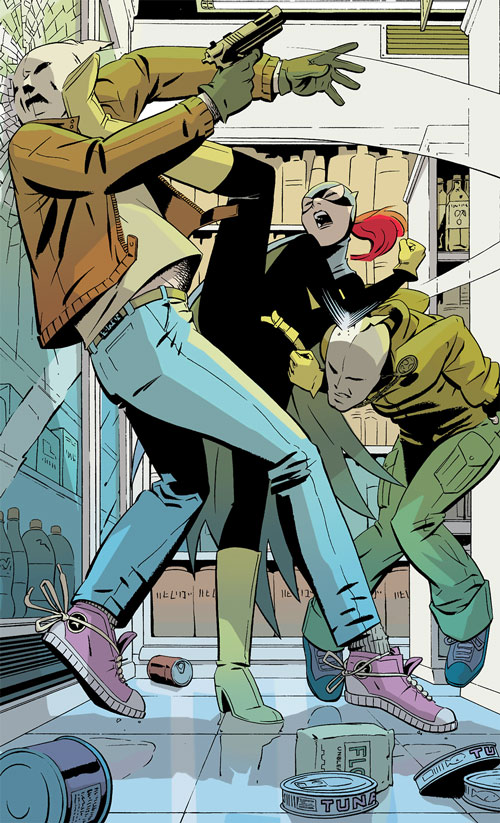 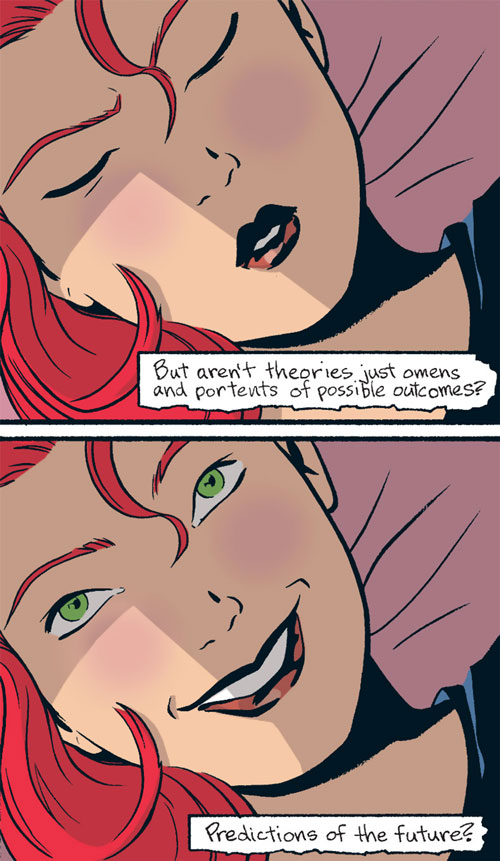 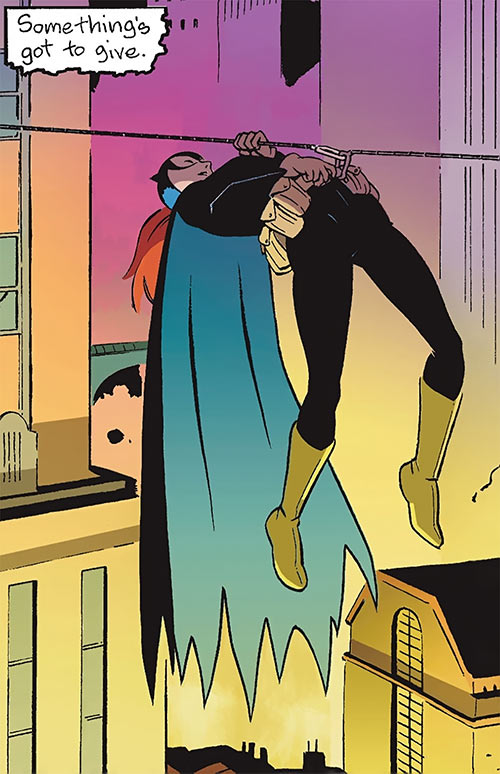 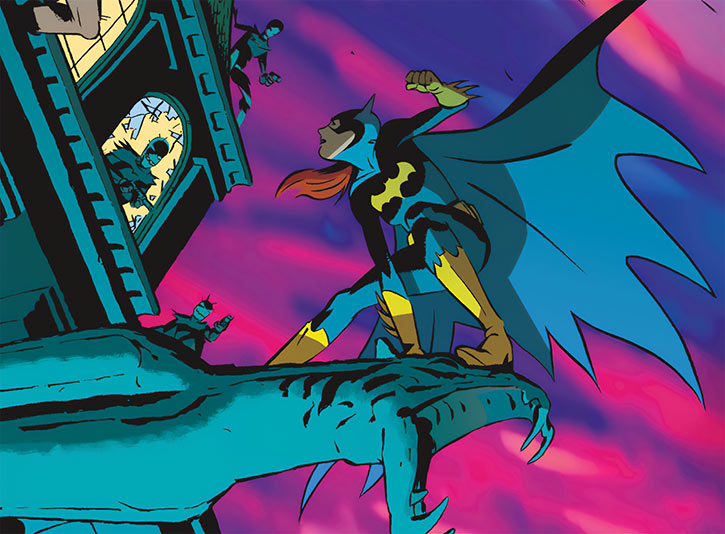 1980s version of Babs’ costume (note the much bigger ears). Out of scope but I need to stockpile this illustration somewhere.