This is a specific version of Batman, in another timelineUsed here in the sense of an alternate history, where events unfold differently.

The Batman of the year 2050 existed in the post-apocalyptic future that Jonah Hex visited in his 1980s series. As you can tell with a glance at our Amazon recommendations. You… do display the recommendations and ads on Writeups.org, right ?

Thus, this is an obscure one-shot character. But he could be useful if you want a version of Batman in some odd alternate reality, future or dimensionOther realms of existence that are not our universe. And there’s the nostalgia factor about the old Hex series, as well.

The Batman of 2050 has no superpowers, although his skills might give the impression he is metahuman. Being highly trained, he is an excellent athlete and martial artist possessing high endurance and strength.

Like the original, he is an intelligent and resourceful man as well as a capable criminologist and detective. He relies a lot on gadgets and is an able engineer, weapons specialist and pilot.

He is fully aware that most people believe the Batman to be a mere urban legend. Thus, Cohen uses rumors and intimidation to their full effect against his opponents.

He knows his way around the city, he knows the criminals and he knows the squealers. This grim man gets his preys and there are plenty of those in post-apocalyptic New York City. 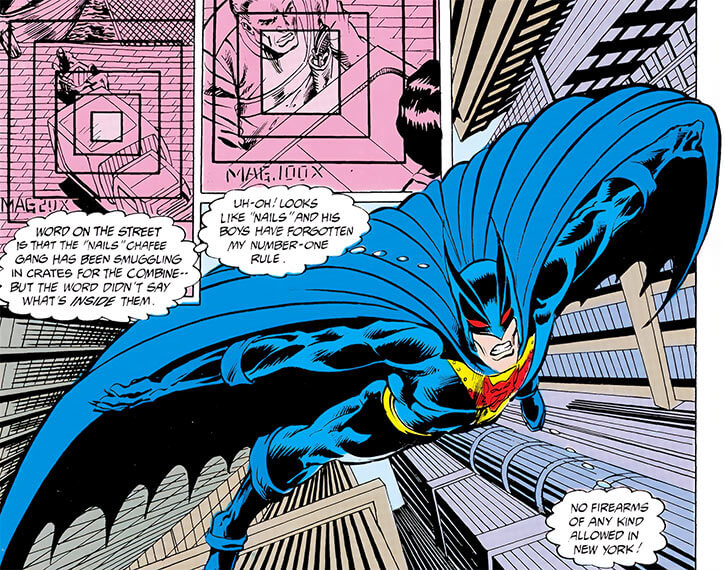 By 2045, Leonard Cohen had become a world-class gymnast, as well as a doctoral candidate in criminology at the John Jay College of Criminal Justice  in New York.

His mother, Miriam Cohen, was a rabbi who, among her other humanitarian concerns, had tirelessly campaigned for handgun control. His father, Kenneth Cohen, had served as a top-level disarmament negotiator under three administrations.

From them, he inherited a compassion for victims of violence and a fervent desire for world peace.

However, they were murdered by the National Reconstruction Alliance, a neo-Nazi party reviling both Jews and gun control advocates.

A bat from the past

Leonard idolized the original Batman, and researched a thesis on the hero’s spectacularly brilliant career. Although Batman’s true identity had never been revealed to the world, Cohen eventually deduced it.

Beneath abandoned Wayne Manor, in the once proud suburbs of Gotham City, Cohen discovered the original Batcave.

He was down in the Hall of Trophies, taking notes and holograms, when the first hail of ICBMs shattered the northeast. World War III had begun. If he hadn’t been sheltered far below ground, he might easily have been among the 150 million who died. 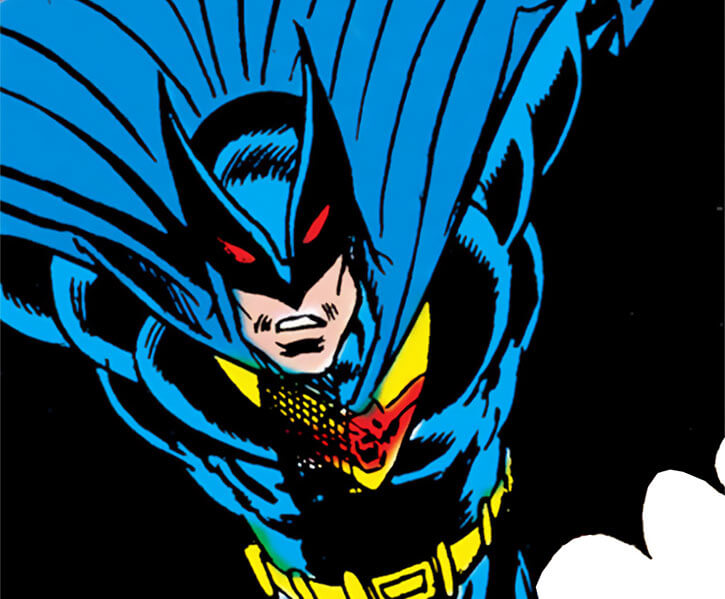 And thus, the Dark Knight returns

Cohen established a headquarters in the Statue of Liberty. He also created his own bat-costume. As long as he lived, there would be no firearms allowed in New York.

Thus, the Batman of the future, in the year 2050, resides in and protects New York City instead of Gotham City. He operates as a vigilante and, much like the original, uses gadgets, detective work and stealth as his main weapons.

He now seems to be a rich man, possibly from his inheritance, being able to come up with all the gadgets that he uses.

When wild west gunfighter Jonah Hex came to New York, he was told by the leading criminal cartel that the Batman had killed his girlfriend Stiletta.

Believing the rumors about Hex’s skills as a gunman and temper to be true, the mob hoped that Hex would kill their great nemesis, the Batman.

After a hefty fight, the two joined forces and saved Stiletta. They then saved the city from destruction by huge terminator machines (no relation) that the mob had smuggled inside the city.

Leonard Cohen, as the Batman, continues to fight to protect the citizens of future New York City.

The future Batman wears a version of the original Batman’s costume with subtle changes. The differences include:

Other than that, the Batman is a muscular and slenderly built man with the same body language and profile as the original. 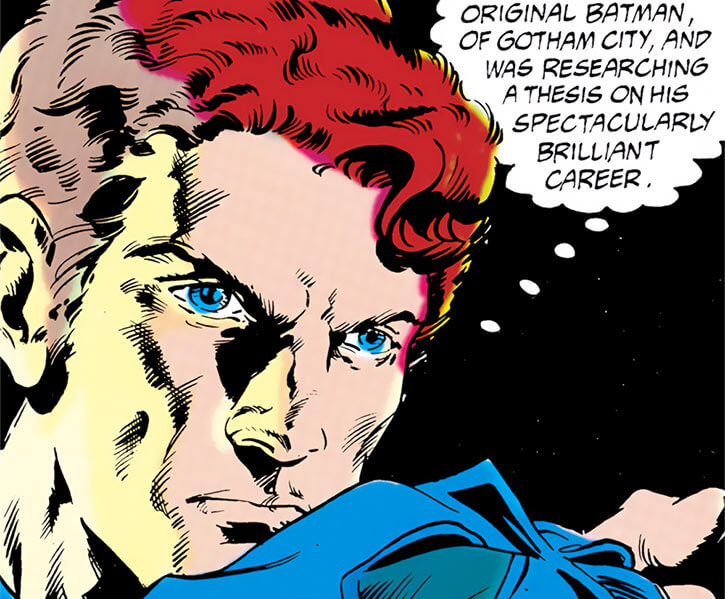 The Batman is a true justice-seeking vigilante. He is fanatically driven, grim and will risk his life to protect the citizens of New York City.

Most certainly, he will do anything in his power to protect the innocent.

It is possible that he uses the guise of the Batman for particular reasons other than homage to the original.

He will immediately be recognized as a crime-fighter (from the legend of the original) and he seems willing to use his status as an urban legend to better be able to use intimidation and the shadows as his weapons.

He carries a great hatred of all guns and similar weapons. Therefore, he will not cooperate with anyone that uses firearms. Howbeit, he will still offer his cooperation if a hero throws away all of his guns at the point that they first meet.

He himself has forsworn the use of firearms and all types of firepower. Still, he was sensible enough to use batarangs as projectiles and equip the Bat-plane with an electro-magnetic beam.

He is known to sometimes warn his prey that he is after them by sending them a message of some kind. For example, he once sent a box containing a couple of live bats together with a small note where he described his intentions (“You know my rule ! No guns in New York ! Dismantle those terminators — or I’ll dismantle you !”).

And, yes, you can still, in that post-apocalyptic world, see the shadow of the Bat hovering in those dark alleys.

More temperamental than the original Batman, he demands the respect of all people around him, particularly criminals.

He is a cynic and a pessimist (or perhaps that is a realist in his world) and will not grasp for straws.

The Batman relies a lot on his gadgets although he doesn’t waste any of them on small-time crooks.

He considers New York to be his city and under his protection, and will therefore curse himself if any unexpected threat has arrived in New York City without him knowing about it.

Having been willing to sacrifice his life for the inhabitants of the city, he carries a very noble streak. 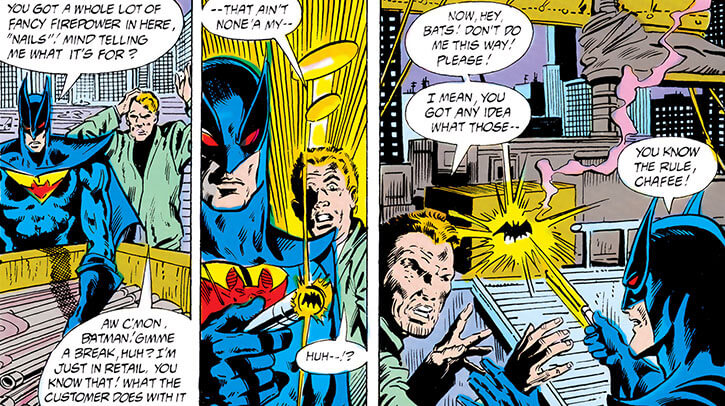 “One more thing, Hex. I don’t like guns or the people who carry them. That means I don’t like you. So go find your girl fast and then get out of town.”

“You know my rules. No guns in New York City !”