This character profile is a snapshot of Batman as he appears in the landmark 27th issue of Detective Comics, cover-dated May, 1939.

It doesn’t go any further, except for a few notes.

For ’em folks who asked, we don’t have a full Batman profile at this point because he’s amply covered by the official DC Heroes RPG material – and those stats serve as very important benchmarks. They’re keystones to the system, so they’re not going to move much.

So we stick with the occasional profile of a very specific version of Batman, such as this one.

The “Bat-Man” is a mysterious and adventurous figure. He fights for righteousness and apprehends the wrongdoer, in his lone battle against the evil forces of society.

In his secret identity, he is Bruce Wayne, of the idle rich. Wayne has a close friendship with Gotham City Police Commissioner Gordon.

Unknown at the time of his first story. But I think we all know 15 versions of this tale, at least, so pick your favorite and run with it.

As a potentially interesting detail, this version of Bruce Wayne was born on April 7th, 1915 (Month from World’s Finest Comics #33, Day of month from Star-Spangled Comics #91, and year from America vs the Justice Society #1). 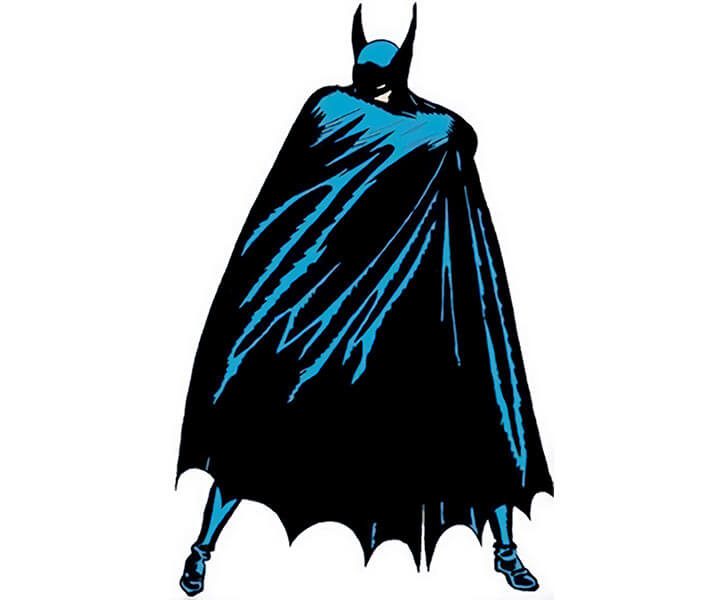 Batman is a fairly tall man.

He wears a solid grey jumpsuit, extremely dark blue trunks, boots, gloves (sorry—I just can’t imagine that they were supposed to be purple…), cape, and cowl, with a complicated-looking belt around his waist.

(And indeed the once-purple gloves were recoloured grey-blue in the digital reissue of Det #27 I’m using to illustrate this article – Ed.).

The jumpsuit, itself has a small insignia in the center of the chest resembling a pair of bat-wings. His cape is scalloped to have a similar effect.

The cowl covers the Bat-Man’s entire head, except for his mouth and chin. It makes the remainder of his head appear more rounded.

It also has large horn-like “ears,” which stem from near the neckline, reaching their points at about the same height as the cowl rounds off.

In his identity as Bruce Wayne, he is relatively good-looking, and always wears well-made suits. 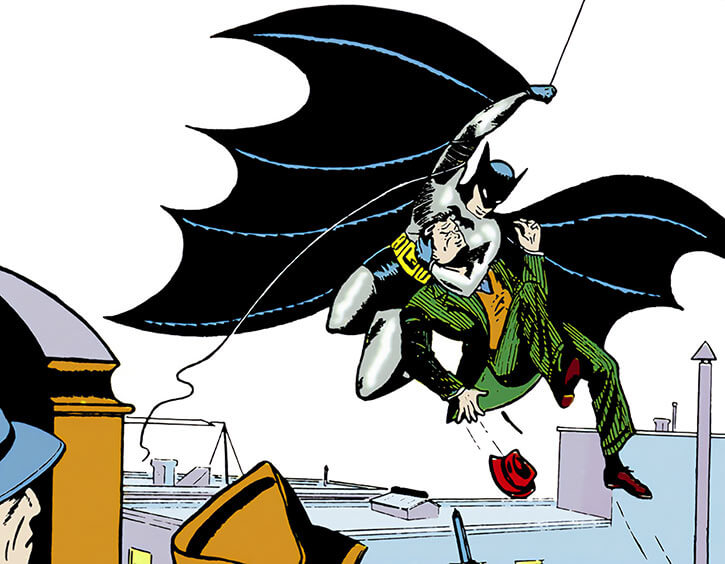 It is unknown at this time what the Bat-Man’s personality is really like. He is grim and callous in battle, but makes a good impression as a “nice guy” as Bruce Wayne.

Beyond that — such as his drive to save people from the fate that befell him as a child when his parents were murdered in front of him — would be pure speculation at this point, of course.

“A fitting end for his kind.” (as a murderer falls into an acid vat)

Commissioner Gordon (High, but only as Bruce Wayne). 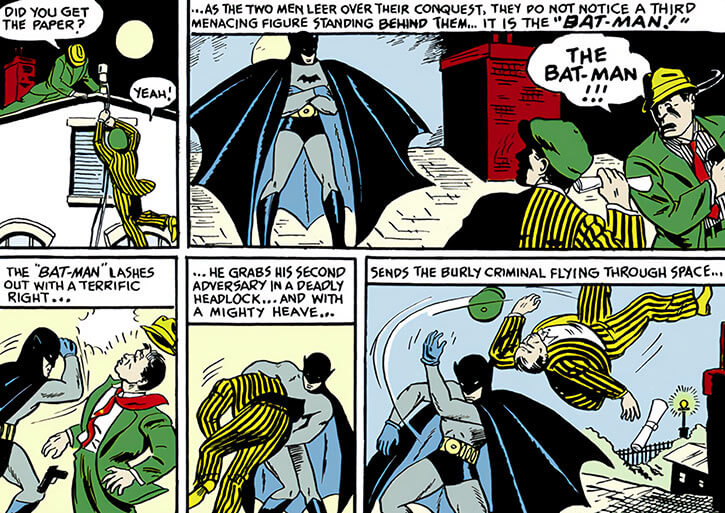 No gun, because it didn’t appear in the first issue. In fact, the Golden Age Batman only carries a gun in Detective Comics #33.

However, I allowed the Gliding cape, just for kicks, since it was mentioned in the “liner notes,” and it is sort of an interesting concept.

Also, DEX and INT have been reduced, slightly.