The Batman is a smart man of stark willpower, who has built up his body to an impressive degree. He’s incredibly strong and fast, and is an excellent hand-to-hand fighter.

Williams’s costume, made of protective cloth, includes various sensory amplifications in the hood. It also has a pair of very efficient glider wings which look like a cape. Some opponents find it scary, many people being somewhat afraid of bats.

Wayne Williams grew up trapped in bad neighbourhood. His dad, a policeman, was killed when Wayne was about 17. His difficult life and the loss of his father left the youth bitter and disillusioned. To help support his mother, he worked at a dead-end job at the mini-market.

During one of Williams’s shifts, the store was hit by a drive-by shooting. The targets were gang leader Handz and his moll, Nita. The young woman froze as her companion dove to cover, but was saved by Williams’s swift actions.

Feeling that the young retail worker had made him look bad in front of his lady, Handz nearly crushed Williams’s fingers, but Nita persuaded him to relent.

Handz, a vengeful man, nevertheless came back the following day. This time he was masked, armed and with two gang members. They robbed the store, shot Williams’s boss in the shoulder, then loudly thanked the young man for having cased the joint for them. Convinced that his employee was indeed a gang accomplice, Williams’s boss had him arrested and sent to prison.

Williams’s imprisonment went badly. He was assigned for several months to working in the garment shop on a sewing machine. This resulted in other inmates developing the notion that he was effeminate. He got in further trouble as his familial values led him to react strongly to injustice around him, getting into prison fights without any support and getting beaten up.

Alone, obsessed with revenge and without a future, Wayne started fearing that he might go mad. However, he befriended a small bat who regularly flew into his solitary cell to eat crumbs. The chiropterum gave him a minimal amount of company. Eventually Wayne made an actual friend – another inmate, one Doctor Frederick Grant.

Williams saved the aged Grant from being beaten up by a huge thug. He learned that the civic-minded scientist had been imprisoned for eco-terrorism – during an attempt to stop the massive company employing him from polluting a river. Grant encouraged Williams to develop his mind and body so he could stand on his own and fight injustice.

Grant’s words clicked with Williams. He started working out with impressive determination. After months of hard work, he became a powerhouse, and proved able to reliably defeat several men in a brawl. He also spent time at the library and discussing with Grant to continue his education.

Grant eventually got out, leaving Williams alone in the pen. A few days later Wayne learned that his mother had passed away, as there was nobody to take care of her. That his mother had died before he had been proven innocent cemented his determination to obtain vengeance.

A short time later, a servant of the Church of Eternal Empowerment engineered a mass escape at the prison. During the ensuing chaos, Wayne found himself defending the warden, punching out the inmates who had broken into the man’s office. He was pardoned.

Wayne took his little bat pet with him as he left the prison.

The outside world was at least as dangerous as the prison, though. Handz had to eliminate Williams, who could prove that he committed a crime. To buy some time, Williams shaved his hair and grew a thick moustache so he wouldn’t be recognised by passers-by.

Watching a crummy TV in a miserable hotel room, Wayne saw masked wrestlers going at it. He realised that it was the perfect answer. His physique was right for the job, and his fighting abilities would make him rich as a shooter . Best of all, he could wear a mask in public – preventing Handz from zeroing in on him.

Using the sewing skills he learned in prison, he created a bat costume inspired by his pet, and became a masked wrestler.

He was successful – and played up his schtick of never, ever appearing unmasked. Nobody could defeat the Batman to unmask him, and Wayne became a millionaire. An able businessman, he was his own agent and signed some lucrative endorsement deals.

More importantly, he was now ready for his revenge.

Williams contacted Doctor Grant, revealed that he was the famous Batman, and struck a partnership with him. Williams wanted to keep a low profile, so they made it look like Grant was the millionaire while Williams was his musclebound bodyguard. Grant also developed gadgets for Williams’ wrestling costume, which mimicked the abilities of bats.

The Batman went to confront Handz, gliding from his custom helicopter into Handz’s penthouse. During the fight, Handz accidentally went over a balcony and died from the fall. Batman walked away and had Grant hire Nita as his secretary – apparently, he had a thing for her.

Batman later reluctantly joined the JLA, becoming a mainstay of this group. Along with them he fought the Doom Patrol, helped bring Reverend Darrk down, and opposed the all-powerful Crisis.

The Batman’s face looks a bit like Lou Gossett Jr. in his mid-30s.

Grim, gruff avenger of the night. Williams is a serious, focused man who is not, despite his impressive media success as a wrestler, attracted to the limelight.

He doesn’t feel particularly at ease with the JLA, but can clearly see the need for such an assemblage to battle major menaces. He’s somewhat defensive about having no super-powers.

Williams seems to have a soft spot for orphans, and likes to help them.

“My father was a cop, gunned down in cold blood. My mother died of a broken heart, because I was framed and sent to jail. I want to *crush* the human vermin who prey on helpless people.”

“You guys look tired. I figure you can use some shut-eye.” (takes several goons out) 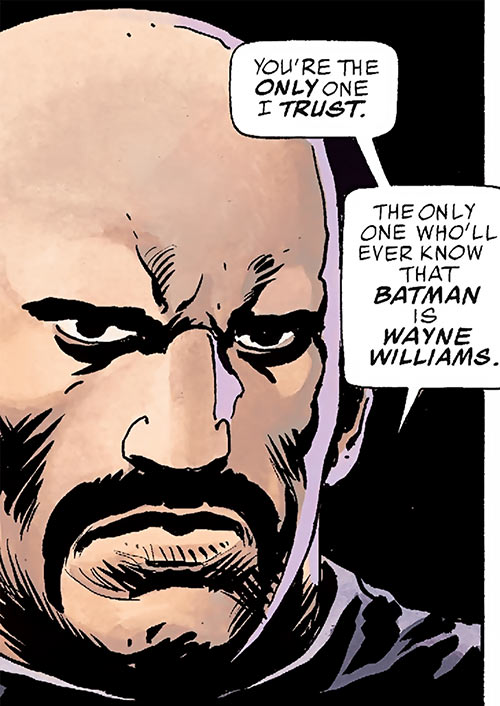 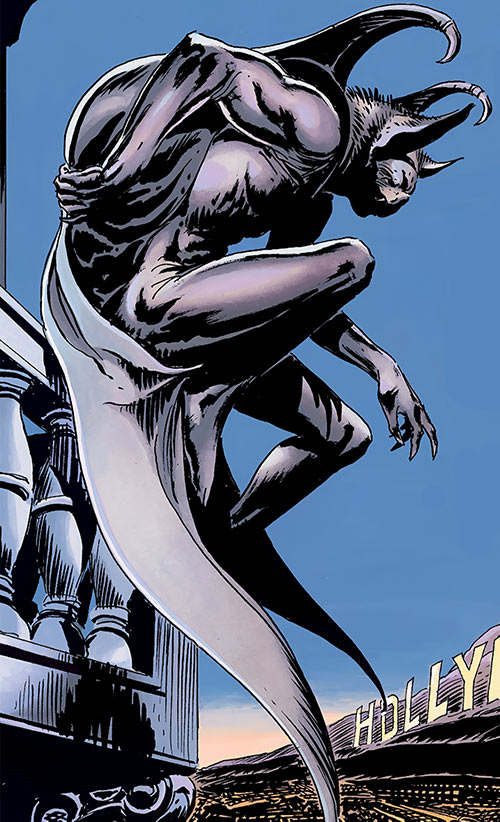