“Did you ever consider if one day Superman and Batman had sons ?”

The “Super-Sons” featured in DC Comics “imaginary stories”. These are tales that don’t take place in the same realities as the bulk of the DC Universe stories.

These are not-altogether-logical stories, using the then-popular “youths in revolt” and societal upheavals themes to tell weird super-hero fare.

And of course, there’s a road trip of self-discovery. There always is.

The “Super-Sons” returned to continuity on Earth-16 during the few years when the DC Universe had 52 Earths.

In 2017, a new version of the “super-sons” idea debuted. But these were quite different tales, with very different characters – Damian Wayne and Jonathan Kent.

Bruce was raised as a playboy.

He wasn’t really trained by his father, as far as we can tell. Rather, he seemingly fights using natural smarts and talents, and does that well.

He knows karate and judo and can handle most opponents.

His deductive ability may follow non-logical methods and unnatural leaps to conclusions. But he still often guesses things right without clues… while other times he just comes up with pure fantasies. As such, he manages to be an adequate field detective. 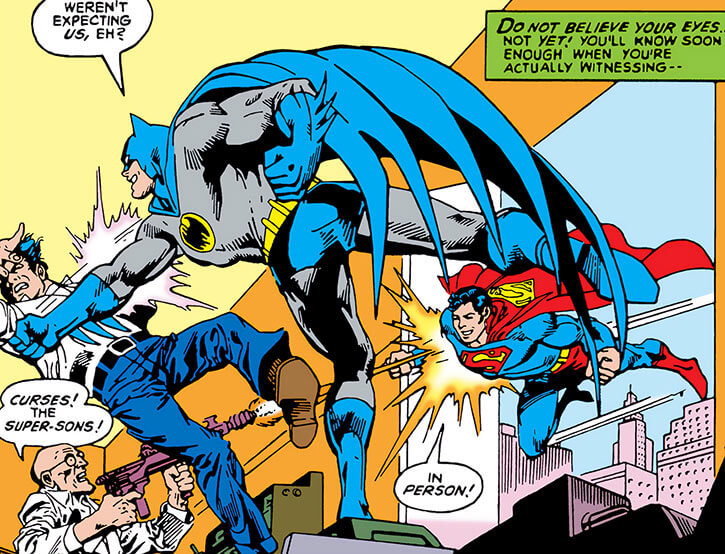 Bruce Wayne Jr. is the son of the legendary Batman, the world’s greatest detective.

His mother is unrevealed. It might be Selina Kyle or Talia Al Ghul.

Bruce grew up alongside his father’s adoptive son, Dick Grayson. He did not know that Dick was Robin.

Bruce Jr. ignored his studies. He usually chose the life of a young playboy. He was always partying, meeting chicks, and doing other cool stuff.

He eventually learned of his father’s true identity just two short years ago, we are told. However, there are also flashback sequences showing that he already knew, since he often witnessed the Batman as a child.

The Batman was supposedly mostly away doing the super-hero thing, which may be why Bruce Jr.’s upbringing may be lacking. Still, his father taught him to be a realist and a pragmatist.

Bruce Jr. did not take well to living in the shadow of the world’s greatest detective. He sought independence through his own heroism. And so did Superman’s equally young son, Clark Kent Jr., his best friend.

The young dynamic duo, Bruce Jr. and Clark Jr. made a road trip through America. They rode on a single motorcycle, and had their share of weird adventures. These taught them valuable lessons, humility, humanity and eventually responsibility. Some are chronicled in Clark, Jr.’s writeups.org profile.

In the end, Bruce Wayne Jr. grew more responsible. He likely will one day become the world’s greatest detective himself.

It was later shown that the Super-Sons lived on Earth-16, one of the 52 Earths, in the Post-Infinite Crisis continuity. Supposedly, their adventures there took place as described originally.

And realizing how crazy all of these stories sound, it must be said in their defence that they are rather campy, funny, drawn with nice art, actual classics and worth a read! 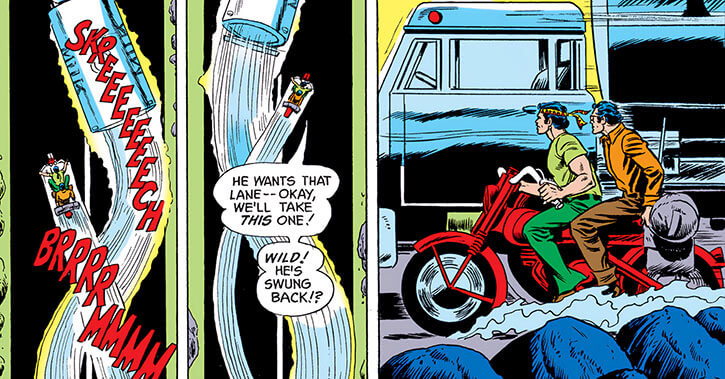 Bruce Wayne Jr. looks exactly like a younger version of his father, Bruce Wayne Sr. aka the Batman.

His civilian clothes are relaxed and either very classy or very hippie-like, depending on circumstances. Them wild and woolly chicks seem to dig his fab suits and roguish style.

His hero costume, however, is exactly like the Batman’s, since it’s one of his reserve costume. The only give-away is his noticeably younger age and him being less bulky. He never denies not being the original Batman, and will always present himself as his son.

Junior is an incurable flirt and hothead. He often will be found among young women, in a party or be on his way to or be in a fight.

Young Bruce was raised a realist and pragmatist by his father, and yet he is something of a semi-hippie.

He is also cynical.

His relationship with his super-hero father is strained by teenage angst.

Apparently he feels that he has a lot to prove to get out from under the shadow of the Bat. And yet, he imitates the superhero activities of his father to the best of his untrained abilities. To the point of using his Batman costume (!), and calling himself Batman Jr..

The question of secret identities is complex. Batman’s and Superman’s secret identities do seem to be known by quite a lot of people even if it’s not public knowledge. Bruce Wayne Jr. has many times been seen together with the Batman and it’s clear to all from the way they talk that they are father and son.

Bruce Jr. doesn’t care for the wishes of either parent regarding his future or activities (both are supposedly old superheroes). Neither does he care much for other superheroes in the world. 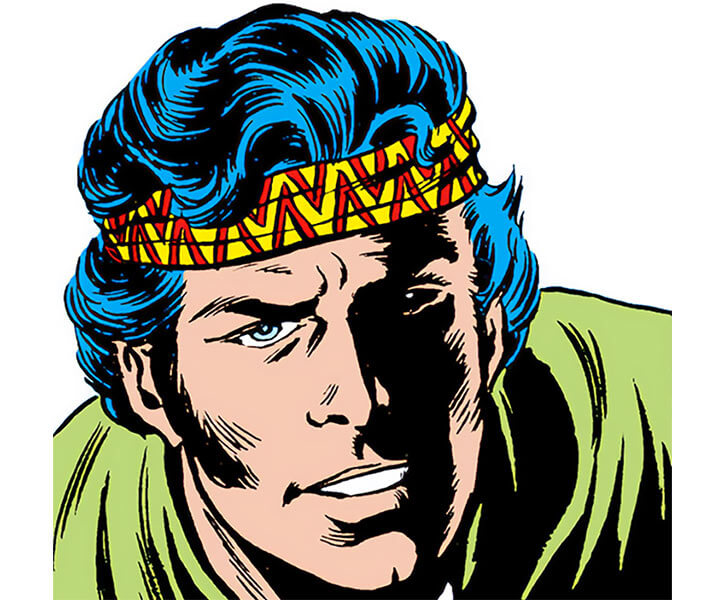 Bruce never experienced any trauma or mishaps during his growth. So his motivation is, at best, to seek out adventure and fun.

Bruce actually has many of the bad public traits of his father, the playboy millionaire. He apparently never learned that these habits were but an act. He is an incurable hothead and flirt who enjoys partying with women, a good scrap and to just chill without responsibility.

He is also often the one to first start running into action while others are still planning what to do. But still, his heart is in the right place. He wants to do right by people. Even if he’s lived a relatively worthless existence most of his life and is lacking a clear moral compass.

He doesn’t take to studying responsibly and neither to life in high society or his own life in general.

However, when he believed his father had been murdered, he immediately stepped up to become the new Batman. He had to prove himself superior to the other contestant, Dick Grayson aka Robin, with whom he must have grown up together with.

While foster brothers they don’t really seem to get along so great, although they both agree that the legacy of the Batman is important and has been a good thing.

He has something of a bromance with his best bud, Clark Kent Jr.. They both have the same problem of having great superhero fathers to grow away from. Apparently, they are the same age and have always known each other.

Bruce Jr. talks a lot in hip slang, like Clark Jr., perhaps to better establish his liberty and independence.

Bruce still has a lot of growing up to do. But seeing the worst sides of America during the duo’s road trip is actually a great way of accomplishing this! Bruce is slowly growing up, realizing that the rich playboy style doesn’t mean anything real. He learns that we must all tackle our responsibilities and live up to our full potential one day. 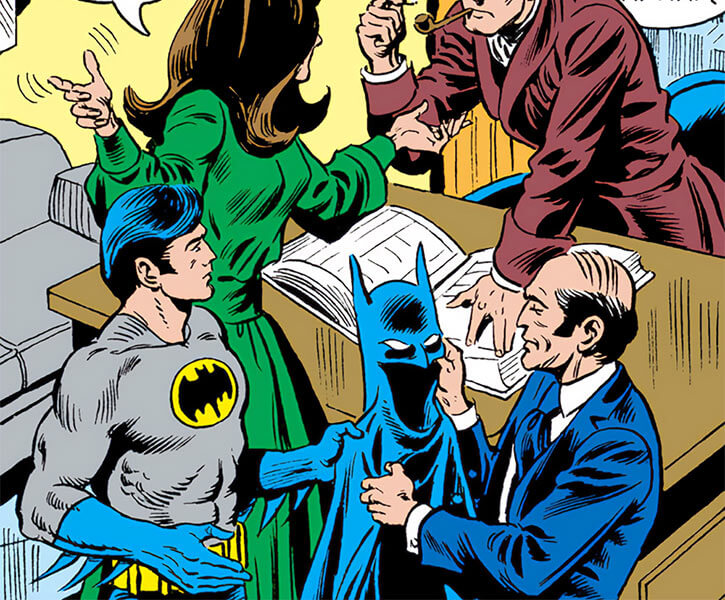 “Civilization ahead at last, Clark, baby ! I’m perishing for a hamburger, and lonely for the look in a chick’s eyes when she sees the muscles rippling under my t-shirt !”

(Having just met and been lectured by the Flash and the Green Arrow) “Hey, I just had a thought ! Those two not only sound like our dads… they could be them… masquerading ! Superman’s as fast as the Flash… and Batman can handle a bow pretty good ! Back to Gotham… we’ve got to check !”

“Where did that gizmo get such power… unless it’s old swamp magic ?”

Bruce Jr. lives on Pre-Crisis Earth-154, which history is largely undocumented. However, in addition to Superman and the Batman there are also Aquaman, the Flash and Green Arrow, as well as Lex Luthor, the villain. 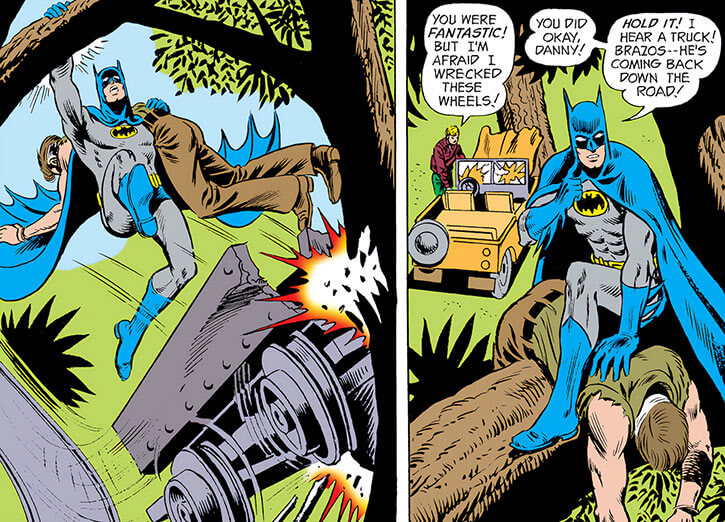