Battalion is a seedling  (mutant) whose powers are derived from telekinesis. They are amplified by his Cyber-Tran suit and focused by his special guns. The most common manifestation are powerful physical blast and protective shield, but he’s been known to wipe an enemy’s mind.

He also has more limited telepathic powers enabling him to communicate with his teammates, read minds and detect opponents’ presence.

As a member of StormWatch field operatives, he received a good fighting training by the hands of Backlash.

Jackson’s Seedling’s powers comes from his father. Isaiah King was among those closest to the comet as he was on the UN Monitor One satellite. Battalion became a field officer of StormWatch as a young man. He then proved himself and rose to the rank of field leader.

StormWatch is the UN’s supernatural crisis response organization. In the Wildstorm universe, the UN is secretly a menacing worldwide conspiracy led by gun-toting, paranoid “Secret Masters”. While they are heroes, the operatives of StormWatch are quite ruthless and do not hesitate to violate the rights of a country in order to advance the agenda of the UN.

Battalion first led StormWatch Prime, to the displeasure of Flashpoint who wanted the job. This lasted up until the Gulf War where Flashpoint, Nautika and Sunburst were reported MIA. Weatherman Bendix disbanded StormWatch Prime and created StormWatch One (Battalion, Diva, Fuji, Hellstrike, Winter) with Jackson still as field leader and StormWatch Two, the heavy fire support (Cannon, Fahrenheit, Ion and Lancer).

Their most fearsome opponents at that time were the MERC, lead by Deathtrap, a mercenary unit whose leader matched Battalion in the field. During a skirmish for the application of the blockade of the renegade state of Gamorra, StormWatch One learned that the MERC where holding the missing members of StormWatch Prime. Battalion ordered his team to go and free them, facing direct orders of the Weatherman.

The mission was successful and StormWatch Prime was operational quite quickly after that. But this unauthorized operation provoked a diplomatic incident. Weatherman Bendix covered Battalion and lost his position. Synergy took it from there. At this time Jackson and her were having a relationship, and it went pretty sour after her promotion.

A time traveler took Battalion to his future. Then Jackson saw that his father, now driven insane by his tremendous powers and calling himself Despot, would indeed conquer the world with his WarGuard. The WarGuard was a team of super powered villain that StormWatch kept on the ice to release them in case they face a threat so powerful they couldn’t handle it.

In an attempt to avoid this fate, Battalion, now back from the future, sneaked in Skywatch and tried to gun his father down in his cryogenic prison. However, he couldn’t pull the trigger on his relative.

Battalion is a big tough Black man. He shaves his head. His suit comes straight from Space: 1999.

Jackson his completely dedicated to his teammates. He can put his life, and damn well his career too, to get them back home sound and safe. He lost to many dear people to let it happen again. So, the mission is something, but it doesn’t overthrow his loyalty to his men.

Nevertheless, he’s ruthless and does not feint at killing his deadly enemies when he estimates they deserve it.

After some discussion with Sean and Jim, an interesting possibility would be that the Guardians only existed in the 1970’s, and that StormWatch is a newer incarnation of that team, replacing the JLI as the UN-sponsored team.

Battalion (before the Despot crisis) 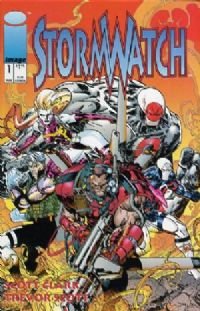