The giant green tiger Battle-Cat is He-man’s companion and heroic mount. For more context about this major 1980s cartoon series, you should first check our Masters of the Universe “base camp” article.

This writeup also covers Battle-Cat’s appearances in the 1985 to 1987 spin-off series She-Ra Princess of Power.

Battle-Cat is a huge fierce armored tiger with sharp claws and fangs, and incredible strength. He possesses great agility and leaping ability.

Cringer/Battle-Cat is one of many talking animals on the planet Eternia. His growls are a form of communication with other animals.

Cringer, like Battle-Cat, has a sensitive sense of smell. He can follow trails and pick up other scents.

Battle-Cat delivers a battering ram style attack by launching himself at opponents or barricades.

See the He-man character profile for details on Battle-Cat’s past.

Battle-Cat is a huge green tiger with orange stripes. He wears a red armored helm and saddle. Battle-Cat has a deep growling voice.

Cringer is a normal sized healthy green tiger with a soft and squeaky voice. He stutters a lot. Adam is often seen in the Royal Palace petting his sidekick.

Given his name by the Sorceress of Grayskull, Battle-Cat is a brave and reliable companion to He-man. Of opposing temperament to Cringer. Battle-Cat is eager for a fight. Intimidation is preferred when facing weaker opponents. 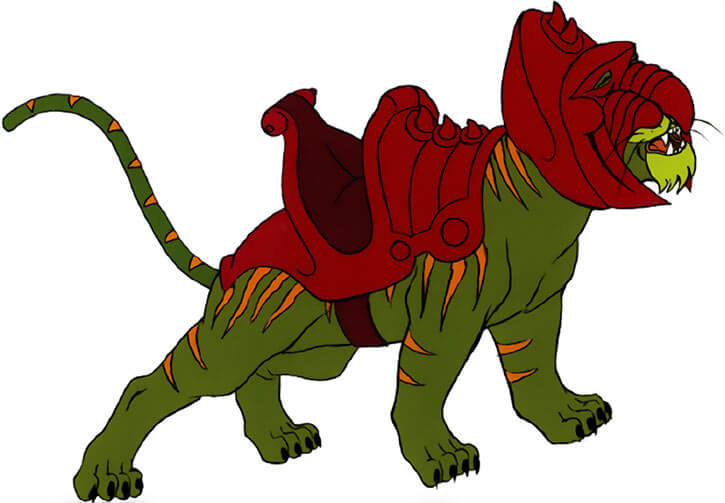 Battle-Cat is always glad to be free of the restraints of his cowardly alter-ego.

He loves to fight even though He-man doesn’t. He-man will sometimes command Battle-Cat to reign in his desire for combat. The two are best friends, riding and fighting and joking together. Battle-Cat always defers to He-man’s judgement.

On occasion he’ll joke with Orko, teasing him about his magic tricks.

Cringer is afraid of pretty much everything. He’s a coward and not afraid to admit it. Cringer hates adventuring and would much rather take a nap after a nice meal. When overtaken by fear Cringer sprints away at top speed.

He’s fairly lazy, lounging around the Palace trying to find a quiet place to relax. Cringer seems to be able to sleep the whole day away only rising for meals. Fish is his favorite!

Cringer acts like a big kitten, playfully pouncing after butterflies.

A good friend to Orko treating each other as equals. While most treat Orko as a child and Cringer as little more than a pet.

Though Cringer doesn’t really like being Battle-Cat; he realizes there are times when he’s needed.

He-Man: “Battle-Cat, when we get to the top, you got to tell Mother Roe we mean her no harm.”
Battle-Cat: “I just hope we speak the same language.”

He-Man: “Come on, Battle-Cat. An Eternian snail can move faster than this.”
Battle-Cat (growls): “One more crack and you’re walking !”

(Battle Cat dropped into a flying Wind Raider) “He-Man, you forgot just one thing. I can’t fly this crazy thing !”

Prince Adam: “This is a job for He-man and Battle-Cat.”
Cringer: “I was afraid of that.”

He-Man: “I know you don’t enjoy this, old cat, but there is a quest for us.”
Cringer: “I know, but every time I turn into that Battle-Cat, you get me into some kind of trouble. I-I-I’ll make a deal with you. I’ll go with you, but as Cringer. Me-me-maybe I can bring some common sense to this quest.”
He-Man: “Alright, my feline friend, but when you change your mind be sure to let me know.”
Cringer: “Fat chance.”

In the DC Universe, or any universe, Battle-Cat without He-man wouldn’t be Battle-Cat. He needs to transform with the power of Grayskull.

As a way to remove Grayskull from Battle-Cat’s origin story. Cringer could drink from the pool in the Valley of Power to explain how he could remain Battle-Cat permanently.

Even an intelligent talking tiger would have trouble fitting in a modern day city. Battle-Cat could be teamed with an existing hero.

It would be interesting to have Battle-Cat in the Savage Land, meeting Ka-Zar and Zabu or Sheena.

A 636 points Character (Without equipment).

Bonuses and Limitations:
Cringer can’t swim but he does float very well. Swimming is his ability to stay on top of the water.

Source of Character: Filmation Presents 1983/1984 animated series He-Man and the Masters of the Universe (particularly the “Battle-Cat” episode), 1985 to 1987 series She-Ra Princess of Power, and the movie The Secret of the Sword, voiced by Alan Oppenheimer. 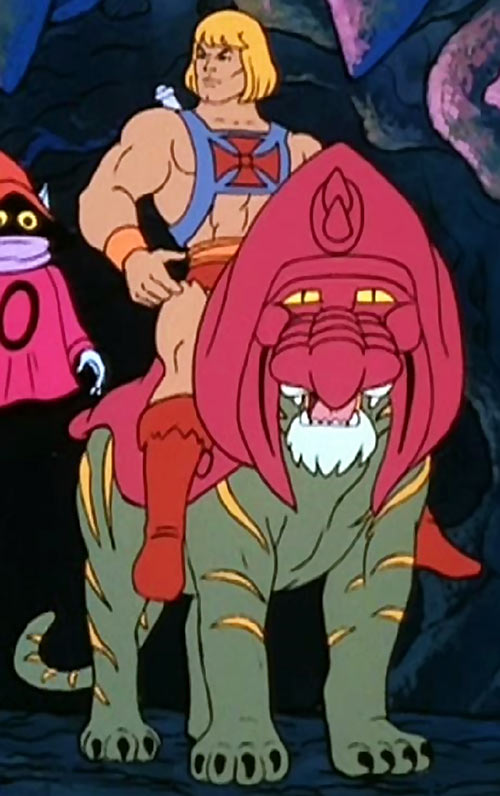