“This is not an army. You dare to challenge me. You’re not warriors. You’re pigs !”

Bavmorda is the evil Queen in the 1988 film Willow.

She fights a prophecy that says a child born bearing a mark will cause her downfall.

Bavmorda is the most powerful and feared sorceress in her world.

She has at least a couple of acolytes who act as advisors and attend her in spell casting.

(According to the novelization, which includes much more backstory for many characters, those acolytes were at one time Bavmorda’s mentors and teachers in the arts of magic. But she became so powerful so quickly that they submitted to her power. They now serve her in these more menial tasks).

As Queen, she controls the lands and all its peoples. Bavmorda commands a huge army. She deploys her troops in small bands of 20 to 100, but thousands can be called on for larger battles.

Her daughter, Sorsha, and General Kael are some of her best fighters. 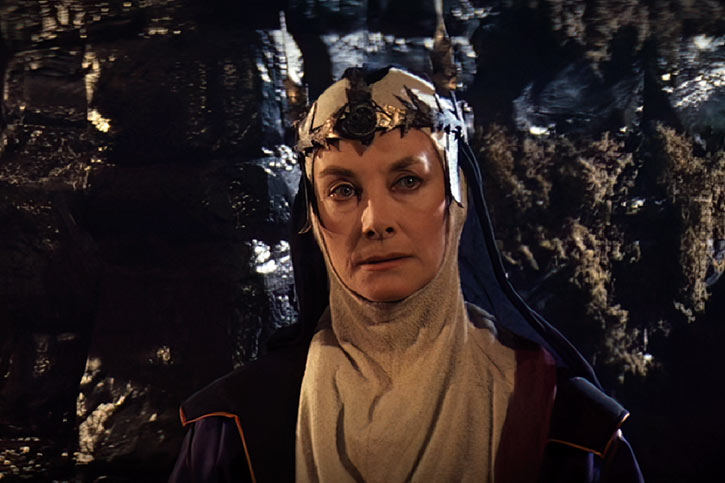 Bavmorda defeated her rival Fin Raziel years ago. Raziel was transformed and exiled to an island.

In her old age, her magic has grown. She raised herself to a Queen and built a powerful army.

This military, led by General Kael, was crushing everything in sight.

Then, along came a prophecy

A prophecy. Seers told of a child would be born and bring about her downfall. The child would have a birthmark in a specific shape on their arm.

She locked up all the expectant mothers in the kingdom. Finally, a girl was born bearing the prophesied mark. Bavmorda rushed to see for herself, but the nursemaid had already made off with the baby.

Bavmorda spent her time and energy trying to find and destroy the prophesied child, Elora Danan.

See the Willow character profile for a complete history. 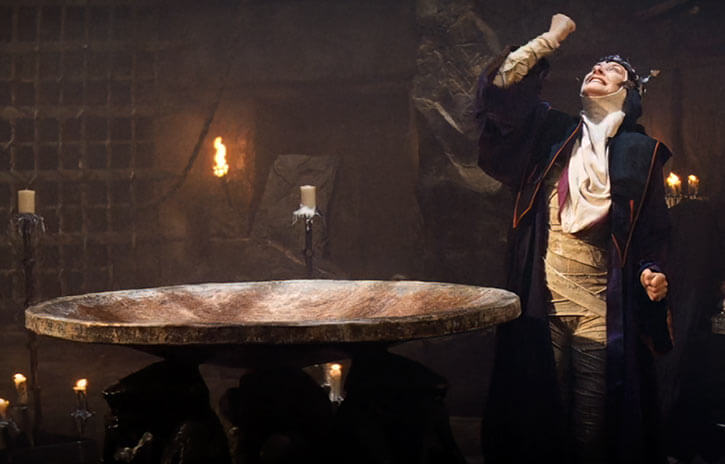 She wears mummy wrappings covering her entire body, save her hands and face.

Bavmorda’s robes are dark. The cowl of her robes is white and red.

Her crown is black metal twisting up like a pair of horns.

Though elderly, with her magic, Bavmorda may appear much younger.

Ruthless. She will do anything to keep the power and control she has gained. Bavmorda will crush those who oppose her.

She hates failure. Bavmorda will always abuse those who fail her and praise those who do what she wants. Sorsha, her daughter, is a usual target.

“I need that baby alive. I must perform the ritual that will exile the child’s spirit into oblivion.”

Advisor: “I read the signs. I fear one day your daughter will betray you.”
Bavmorda: “I trust her loyalty more than I do yours.”

“Begin the ritual. This baby will not destroy me.”

Bavmorda: “Now you will watch me draw upon the power of the universe to send that child to another world ! Now place it on the altar !”
Willow: “No !”
Bavmorda: “No ?”
Willow: “You stupid hag. With my magic, I’ll send her into the… into a…”
Bavmorda: “You’re no sorcerer.”
Willow: “Into a realm where evil cannot touch her.”
Bavmorda: “Impossible ! There’s no such place !” 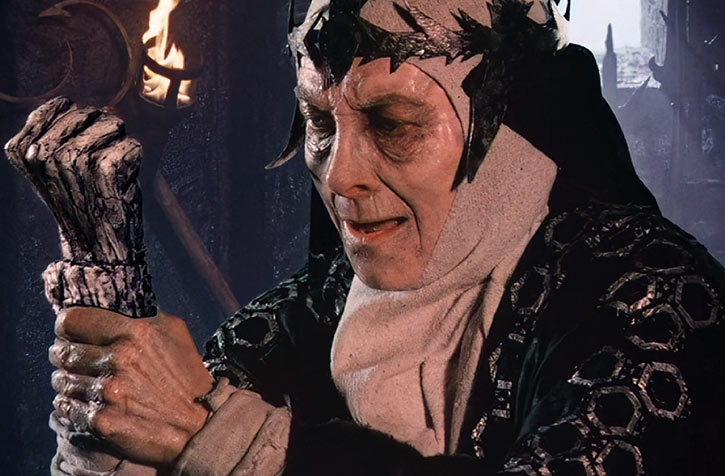 Given her archetypal role, Bavmorda could certainly be channelled by the Queen of Fables. Thus making the Willow story part of her toolset in the DC Universe… or elsewhere.

The Ritual of oblivion was used to model her other off-screen Ritual. Thus, the casting time, Components, and Special Restrictions are the same. GMs are free to change these details if something else makes more sense.

Ritual of Oblivion
Effect: Dimension Travel (Banish Only): 08
Casting Time: 14 (12 hours).
Components: 00 (Cost in APs).
Special Restrictions: A large stone altar, several rites to recite and act out, candles, and more, the preparation takes several hours. Must be performed during a thunderstorm.
Comments: This Ritual can end the prophecy by expelling the child’s soul into another dimension. Bavmorda chose “the 13th night”!
Cost: 115.

Turn to stone curse
Effect: Petrification: 08, Bonuses and Limitations: Petrification has Range: Normal (+1) and Area Effect (+1), Selective (+1 FC) targeting only her enemies for instance.
Casting Time: 14 (12 hours)
Components: 00 (Cost in APs)
Special Restrictions: A large stone altar, several rites to recite and act out, candles, and more, the preparation takes several hours. Must be performed during a thunderstorm.
Comments: This Ritual was used to encase all the people of Tir Asleen in stone.
Cost: 18 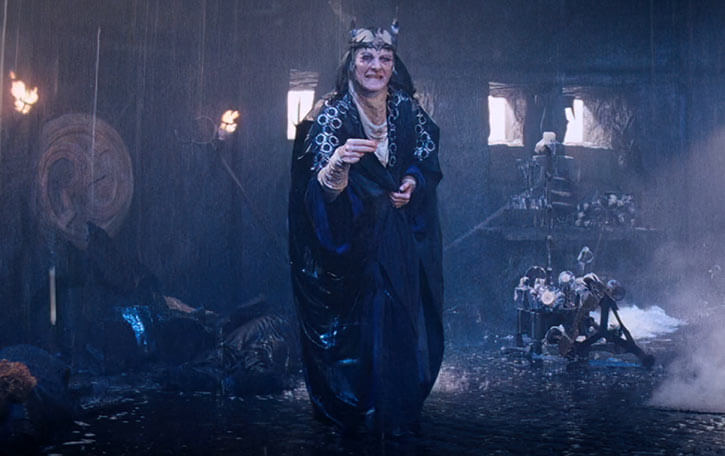 All magic-users in Willow use transformation magic.

Bavmorda transforms an opposing army into a herd of pigs. She uses area-effect but doesn’t initially target her daughter Sorsha. Also, the enemy’s horses are not harmed. Therefore the “Selective” bonus was added.

It appears by the spilling of liquids and the lightning strike that Bavmorda’s Ritual of Oblivion spell took effect on herself.

Whenever a Power is listed like Telekinesis or Transform, use that power instead of mimicking it with Sorcery.

Sorcery – Uses of Sorcery were: