B.D. Rickenbacker would be a physically powerful man even without his cyborg implants. The implants, however, give him superhuman strength and durability, which he’ll gladly use to bash in the heads of his enemies.

He’s an able brawler and often combines intimidation with punching, when faced with various opponents.

His might is mainly physical, but perhaps surprisingly, he has good knowledge of cyborg technology, as well as any recent gadget and even their manufacturers. This is, of course, since he had to be knowledgeable, for the sake of his Bloodbowl games, so that he’d always be sure to have the best cyborg parts himself.

Bobo Dan Rickenbacker was an old veteran of the deadly games of Bloodbowl in the city of Big City. He was a true veteran with 59 confirmed kills, 109 helpings to kills and 212 registered amputations, in the games. During his years he had also had 21 surgeries due to injuries, plus eight implant operations.

Unfortunately, this many implants were illegal according to the Bloodbowl rules. Rickenbacker was fired. Being unemployed when found by Kaine Salinger, and looking for new adventures, he readily accepted membership.

Rickenbacker is clearly a cyborg. On his bald head, which is attached to the rest of his body via a metallic neck, he wears a metallic wire, from the spine, going down to his forehead where it ends with a plate. His teeth are polished into very sharp shark-like structures.

Also, his entire right arm is changed into a large, powerful metallic cyborg construction. The hand can be shot away like a grappling hook.

The rest of his body, which is clad is sportsman-like attire, is muscular and strong Around his shoulders and on his back he wears small, white stars in his garments. When he’s unhappy or angry he’s a horrible sight, and when he’s happy his grinning also makes him into a horrible sight.

There are two main themes in Rickenbacker’s personality; the team player and the raging bull.

He loves being part of a group. He will often sing moral-boosting songs to their glory. When everyone else has given up, B.D., just starts again. It might be that he’s too stupid to give up, but more likely he’s just strong-willed when it comes to winning. He was actually the one to keep going on when everyone else had given up.

He also has a terrible temper. Even the slightest insult can occasionally get him into a state of murderous, raging mania. Simply, he sometimes just flips and his brain is stuck in a violent mode. When that happens he’ll just utter the same sentence repeatedly.

Towards his friends he’s a good and caring pal, but even they may provoke him into a psychopath. Mostly on missions, though, Rickenbacker is in a cheerful, adventurous mood, but beware those who try to oppose him. Apparently, he full well knows what a freak he looks like, and accepts it, but will anyway take it as an insult if someone comments on it. He himself may, of course, comment on it.

In his speech he’s somewhat child-like and gives a generally stupid impression. His best friends are, of course, his old sports-pals Killer and Dr. Watson, though they sound even stupider than DB does.

He’ll gleefully follow the orders of Salinger as long at it gives him some possibilities to kill some opponents. Being an old sports star he loves everything that has to do with sports, and, in particular, violent sports like Bloodbowl.

In the DC Universe they have no real position of equivalent, although, in case the Outcasts’ world is in the DC Universe’s future, they might be descendants from various well-known DC characters.

For example, D.B. Rickenbacker might be a descendant of Victor Stone alias Cyborg (following the cyborg traditions) and Yancy Queeg the descendant of Pariah (born normal, but easily cursed into eternal life). 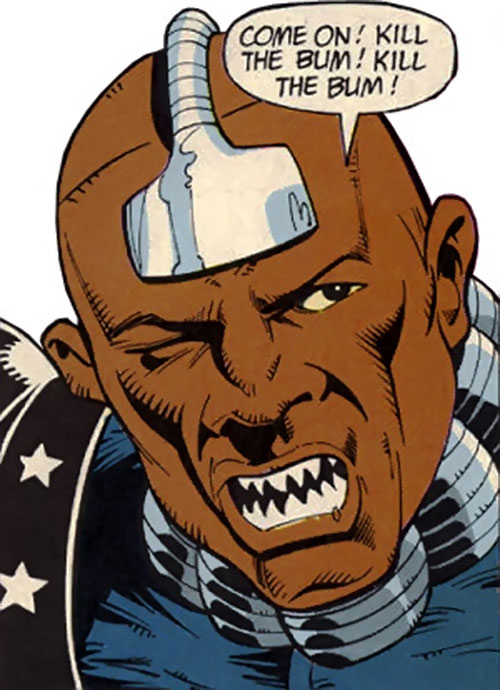