Beast-Man appeared in the 1983-1984 He-man and the Masters of the Universe animated TV series.

For more about it, see our Masters of the Universe setting primer.

Beast-Man, as his name implies, is a strong bestial warrior with claws and fangs. He’s reminiscent of the original Wolf Man, and is one of the most recognizable villains from the series.

Originally, he was Skeletor’s right hand man. Later, he fell to the role of cowardly minion.

Beast-Man is one of the strongest warriors in Eternia, displaying “Class 5” strength. Because of this, his tactics are usually to charge in and snatch up his opponent in a crushing bear hug.

Beast-Man employs a whip as his weapon of choice. It’s most often used to entangle opponents but sometimes cracked loudly to aid in intimidation.

He is a capable intimidator.

All manner of beasts are manipulated telepathically by Beast-Man. But during the time he was exiled from Snake Mountain, Beast-Man said his powers over beasts became weaker.

Beast-Man is an expert at disguises. He uses rubber masks and costumes to fool crowds of people – and even Prince Adam and the Royal Court.

Working with Skeletor and Evil-Lyn, Beast-Man is adept at using the many magical artifacts and scientific devices around Snake Mountain. When necessary, Beast-Man aids in the casting of powerful spells.

He’s a better climber than Mer-Man. 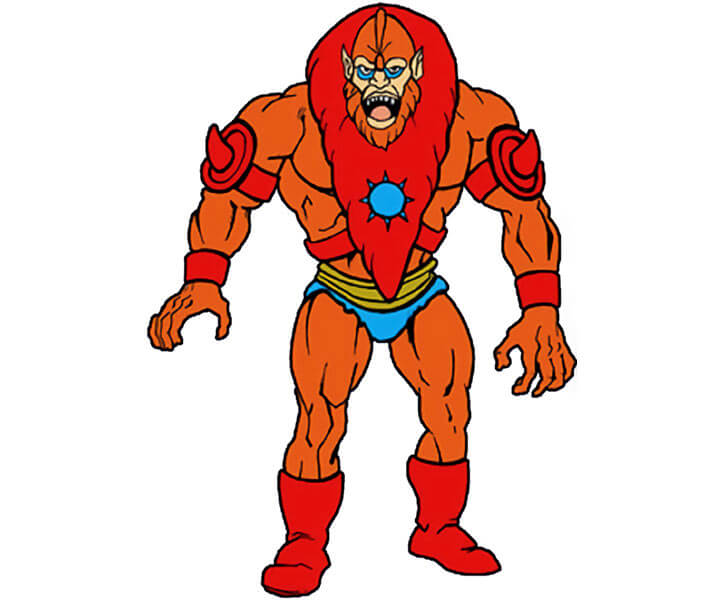 Skeletor left Hordak’s side to set up his own rule at Snake Mountain. His first warrior and right hand man was Beast-Man. Presumably, Skeletor saw potential in this muscular bully.

Many more villainous warriors joined Skeletor. But after many defeats at the hands of He-man, Skeletor vented his anger by banishing Beast-Man.

Beast-Man attempted to prove his worth by capturing King Randor. He succeeded, but He-man came to the King’s rescue.

Beast-Man had to answer once again to Skeletor. Still, he was allowed to take his place in Snake Mountain if only as Skeletor’s whipping boy. 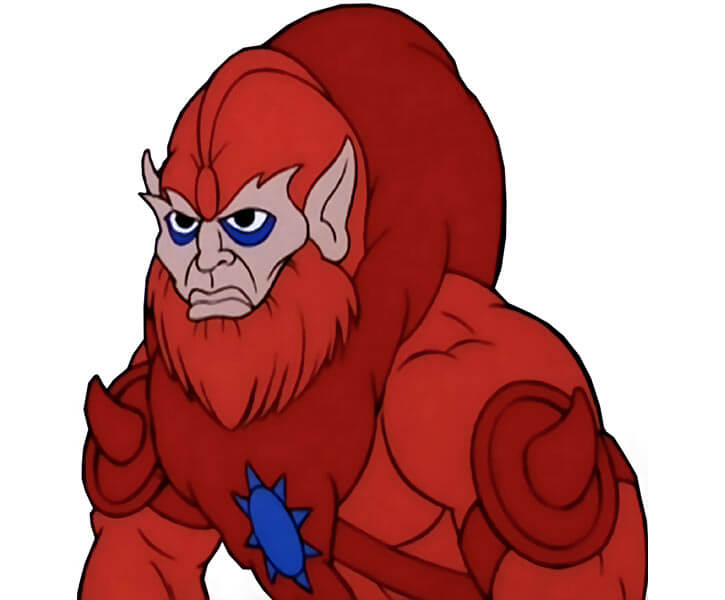 His red armor is minimal, only covering a portion of his chest and upper arms.

Beast-Man has what I’d call a werewolf style face from classic movies. He has large vicious canines and large pointed ears.

Beast-Man is heavily muscled. He looks as massive as his villainous male counterparts but stands in a semi-crouched stance making him appear much shorter.

He runs with a stumbling gait.

In the beginning, Beast-man saw himself as nearly Skeletor’s equal. He often voiced his disdain for Skeletor’s treatment.

Beast-man even went so far as to mutter his mutiny in Skeletor’s presence. Alone with his friend and rival Mer-man, Beast-Man has been known to openly laugh and proclaim his future rule over Eternia, in place of Skeletor. Yet he always backed down quickly when confronted.

None of the other warriors seem to get along with Beast-Man.

He’s a bit dull, but ambitious. Howbeit, he’s not a great strategist. All of his plans leave him with nothing but stuttering excuses before Skeletor.

Imagine you’ve grown up strong, really strong! You can overpower any opponent. This was Beast-Man before He-man. Suddenly along comes He-Man and he is so impossibly strong. He’s able to toss Beast-Man around like a child.

It wasn’t long until anytime He-man showed up Beast-Man would look shocked and scream out a warning, “It’s He-man!”. You can see the damage to Beast-Man’s psyche and self esteem over time.

As time progresses, Beast-Man settled into his role as minion. He only attempts to please Skeletor or Evil-Lyn. He sees them both as his betters.

He no longer stands up for himself, and takes their berating with astonished and fearful glances. At this point he is a coward and will hit his knees begging in an instant. 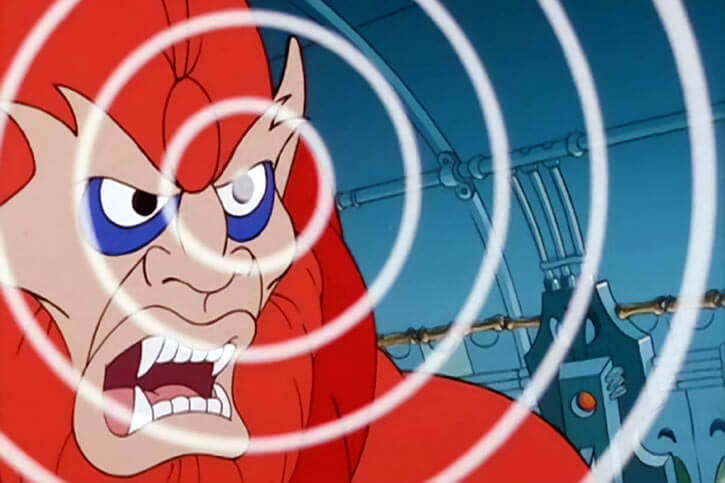 “As you wish, Skeletor.”

Beast-Man: “What makes you think you can always order me around ?”
Skeletor: “This !” (Raises his Havoc staff threateningly)

Skeletor: “Hehehehe, I’m so powerful I even impress myself !”
Beast-Man: “Bah, but you don’t impress me, some day I’ll show you what power really is.”
Skeletor: “Did you say something ?”
Beast-Man: “No, nothing, Skeletor.”

Beast-Man: “I will not fail !”
Skeletor: “You better not fail, fur brain.”

Skeletor: “Beast-Man, use your mental power to tame and command that creature.”
Beast-Man (using his power over beasts): “There. Tame as a kitten.”

“Giant crawler, arise ! Hehe, this should bug them a little ! hehehe!”

Skeletor: “It’s He-man !”
Beast-Man: “That muscle-bound meddler, let me take care of him !”

“Whenever something doesn’t work around here, I catch the blame !”

Beast-Man isn’t smart and would end up look for someone to lead him. Choose any of the many masterminds needing thugs and Beast-Man is easily coerced into joining. 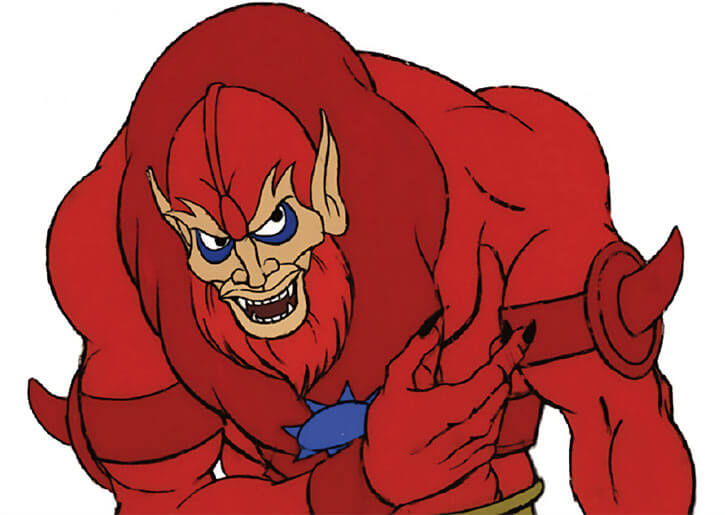 A 528 points Character (Without equipment).

Expertise (Animals and Beasts of Eternia).

Skeletor and his warriors(Low), Merman (Low).

Beast-Man’s control over beasts and animals is fairly consistent with only a couple of outliers.

There are modifiers that GMs should consider when Beast-Man is trying to control creatures. Like the time he couldn’t control the mother dragon because she was protecting her eggs.

Source of Character: Filmation’s 1983/1984 animated series He-Man and the Masters of the Universe and the animated movie The Secret of the Sword and TV Special Skeletor’s Revenge, voiced by John Erwin.