These monstrous troopers were encountered by Wonder Woman (Diana of Themyscira) once, during a 1969 storyline. That was during the span where Diana had renounced her powers, which we call the “mod karate era”.

The Beast-Men are a rampaging barbarian horde with Classical equipment, tactics and training. They are, however, thoroughly non-human. The two most common phenotypes are centaurs, and fat goblins riding small mounts that look like a cross between a pig and a kangaroo.

The Beast-Men look so ugly, weird and confusing that they can paralyze armies into indecision. They use this as their major tactical edge. In DC Heroes RPG terms they use their Automatic Actions to move around and position themselves while they use their Dice Action on Aura of Fear. In combat, though, they use their actions to fight normally.

Given their wide variance in size, some Beast-Men may have up to 2 or 3 APs in Growth or Shrink.

The Beast-Men of Phobus and Diemos (spelled that way throughout the story), sons of Ares, are an Olympian army. It was once deployed to invade the pre-Crisis Paradise Island while it was in another dimension . Ares had been denied the secret of dimensional travel by Hippolyte, and was ready to kill every last Amazon in open warfare to get it. 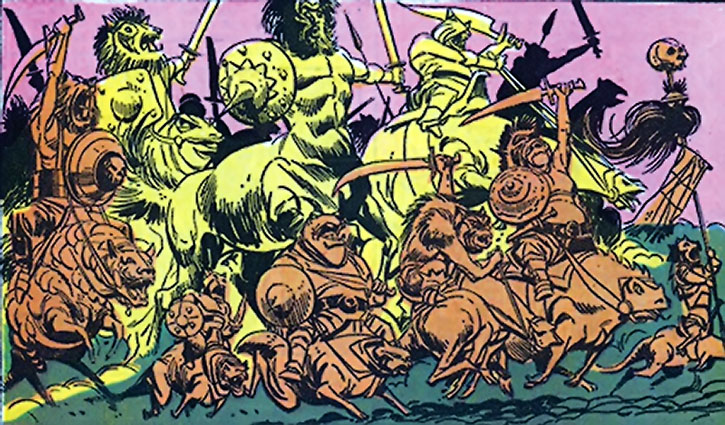 The first attack by Ares’ troops was repulsed. Afterwards, the Amazons sent a messenger to fetch Wonder Woman on Earth. At this point Diana didn’t have her superhuman powers anymore. Yet she took command of the Amazons in desperate battle.

Ares then sent the Beast-Men against the Amazons. Their unearthly appearance paralyzed even the indomitable women warriors. But Diana noted that her mentor, a blind human nicknamed I-Ching, seemed completely unaffected. Realizing that not seeing the Beast-Men meant not being affected by them, Diana ordered a blind charge with the Amazons staying behind their shields.

The battle was difficult and left many Amazons dead, as they were greatly outnumbered by the Beast-Men. But it allowed the women to break the ranks of the Beast-Men and ultimately send them into a chaotic retreat. The day was won.

We don’t really see them fighting, so these stats are speculative.