Beck is an impressive hand to hand combatant. In particular he’s exceptionally skilled at grabbing, emptying and dismantling guns in one smooth action so they may not be fired again.

Should he get pushed to the point where he decides to actually USE any of the guns he’s managed to get his hands on, he’ll practically become a one-man army. However, he absolutely hates using firearms.

Beck is remarkably perceptive and typically remains cognisant of his surroundings at all times (in DC Heroes terms, Sharp Eye). He is able to take in, pick out, & remember a great deal of fine, practically trivial, detail and information upon entering a scene (Recall).

The Konlobos (Cone-lah-bo’s) is a rare, large-seeded, but tasty, melon-like, fruit about the size of a softball. They have an odd ability to cause warping hallucinations and paralysis. Beck has managed to smuggle some back into the United States, after having fallen victim to its effects once himself.

Official trailer for the movie.

Beck was born in a very rough part of town. When you get pushed, you push back, and Beck managed to push so hard that word got around. Soon enough, he was working for Billy Walker, a well connected “money lender.”

How Beck managed to become so indebted to Walker is unknown, but he found himself in his employ for a number of years. These years were drawn out by Walker constantly nickel and dime-ing the amounts Beck would earn towards his debt.

Beck, however, wanted out of this arrangement. So Billy offered him one last job… retrieve his errant son, Travis. If Beck could march him back through the doors of Billy’s mansion, he’d be free of his debt, and $250,000 richer, enough to open the restaurant he’d always wanted.

One rickety plane ride later, Beck found himself landing on a dirt airstrip in the jungles of Brazil.

The town was named El Dorado, after the legendary “city of gold”. However, it was nicknamed “HellDorado” by its inhabitants. It, the surrounding jungle, and some would say, its people, were all owned by one Cornelius Hatcher of the Corporation Mining Company.

Hatcher was a tyrant that used the local populace of El Dorado as cheap, practically slave, labor in his hellish strip goldmine. At 65 cents/hour, the people could hardly afford their rent & mining tools. So Hatcher would lend them the money to do so (at an increased rate), keeping them entirely under his thumb.

Beck was able to locate and subdue Travis in short order. Option B, however, was altered as Hatcher and his forces appeared to put a stop to things. Turns out, Travis was hunting for “O Gato do Diabo” (The Devil’s Cat), a near-priceless golden artifact. In Hatcher’s mind, this object was in his jungle, and as such belonged to him.

Thus, Travis was to stay and find it. One narrow escape and trashed cantina later, Beck & Travis were on their way back to the airstrip.

Fate, and Travis’ knack for distraction, intervened. Now way off course, with armed forces in pursuit, Beck forced Travis to march and guide him through the jungle, back to the plane. Through a series of misadventures involving amorous baboons and freedom fighters, the two ended up teaming with Mariana, cantina owner and rebel leader, to finally locate the artifact.

Mariana, wanting to make sure the money from selling the Gato would free her people from Hatcher’s service, introduced Beck & Travis to Konlobos fruit. She then ran off with the artifact alone.

Finally making it back to the airstrip with Travis, Beck learned that Mariana had been captured. The Gato was now the possession of the tyrannical Hatcher. Having made a deal with Mariana (that she could have the Gato if she would show him the way back to the airstrip and allow him to leave with Travis), Beck returned to the town to take down Hatcher and his men.

He therefore saved people from their slave-like existence.

The two men then returned to Los Angeles to fulfill Beck’s contract. One quick rescue later, the two were once again on the road, any further adventures a story for another day…

Beck is a tall, handsome, very well built man of Pacific Islander ancestry, typically well-dressed in a gray or tan suit with no tie. After a few days of fighting his way through the jungle of Brazil, he looks a bit worse for wear, covered with various cuts and grime.

Under most circumstances, by virtue of his sheer size, he tends to stand out in a crowd. Beck is played by Dwayne Johnson, the former WWE champion known as “The Rock.”

Beck is big, tough, and a total bad ass. He just seems to have a difficult time getting others to believe that last part until it’s too late. Considering his attempts to be polite and diplomatic, most targets are left shocked and amazed when he actually takes violent action. Mostly, he wishes people would just take Option A for a change.

He detests having to use a gun, and will only do so as an absolute last resort. He is generally more than capable of taking out most enemies via hand to hand combat and has a great deal of faith in his abilities. He will typically expend Hero Points  for Last Ditch Defense and Desperation Recovery only, unless something else comes up that is entirely necessary.

Apart from when he feels the need to act forceful, Beck is a genuinely pleasant, good hearted, individual that one day hopes to open his own restaurant… ”Ten, fifteen tables, nothing fancy. Italian,…Southern Italian.” He is often seen jotting down culinary tidbits in a small notebook whenever he is able and something new interests him.

“They’ve got a legitimate shot at repeating this year, I do not want to hurt them.”
(To his boss when assigned to retrieve a gambling debt at a night club from an arrogant NFL quarterback that happens to be accompanied by a more than a few members of the offensive line)

Beck (To aforementioned quarterback): “You’ve got two choices… Option A, you give me the ring… Option B, I MAKE you give me the ring.”
Knappmiller: “I’ll take B.”
Beck (Punches out approaching player/bodyguard): “Wrong choice.” (Proceeds to kick the asses of the entire team and eventually take the ring, all to the tune of Missy Elliot’s Get Ur Freak On)

Beck: “You know, back in the states, Brazil Nuts like these go for fifteen dollars a pound.”
Mariana: “Well those fell off the tree out back, and around here we don’t call them ’Brazil Nuts.‘”

Travis: “What is that ? Some kind of nouveau samurai code or something ? You got a problem with guns ?”
Beck: “Let’s just say they take me to a place I don’t wanna go”
Travis: “Where do they take you ?”
Beck: “To a place you don’t wanna see me go… Walk !” (Pushes Travis)
(Briefly Later)
Travis: “What are you saying ? Guns make you un poco loco ? Bang bang crazy ?”

(Travis Stops walking)
Beck: “What are you doing ?”
Travis: “I have to pee.”
Beck: “Pee in your pants… move !”
Travis: “No ! I’ve let you push me around this jungle for like 5 hours. You’ve been very aggressive, and I’m not taking another step until you let me pee. If you want to keep on goin’, you’re just gonna have to carry me. I guarantee ya, I’m gonna pee on your head.”
Beck: “You threatening me ? Threatening me with pee ?”

Beck: “I have no desire to fight with you or your men. For that reason you have two options… Option A, you leave the Gato and the girl, and you walk out of town no questions asked.”
Hatcher: “And what’s Option B ?”
Beck: “Option B, I make you.”
Hatcher: (Laughter)
Beck: “Wrong choice.”

Beck would work best in a street-level game, preferably one set in Los Angeles. He may have continued on with Travis, treasure hunting (maybe after the Kung Kao Pao diamond in Mongolia (as hinted at in an alternate, deleted ending to the film)), but it is more likely he finally opened his dream restaurant.

Perhaps his actions in El Dorado drew the attention of the Brazilian heroine Fire.

Note that he has to overcome his IA toward not using them, *then* pay the fee as per the Regretful Limitation.

Source of Character: Action comedy film, The Rundown(aka “Helldorado” aka “Welcome to the Jungle”), played by Dwayne “The Rock” Johnson. 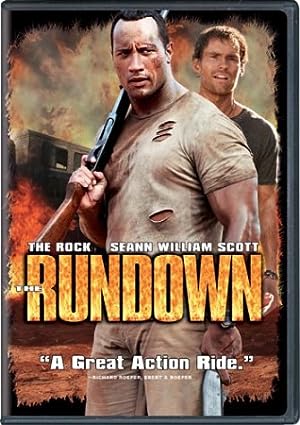 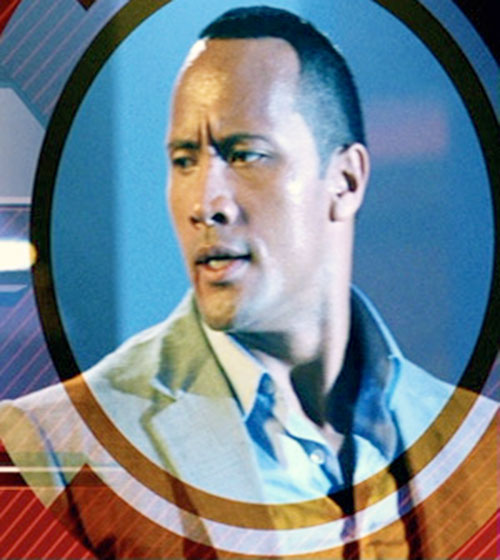 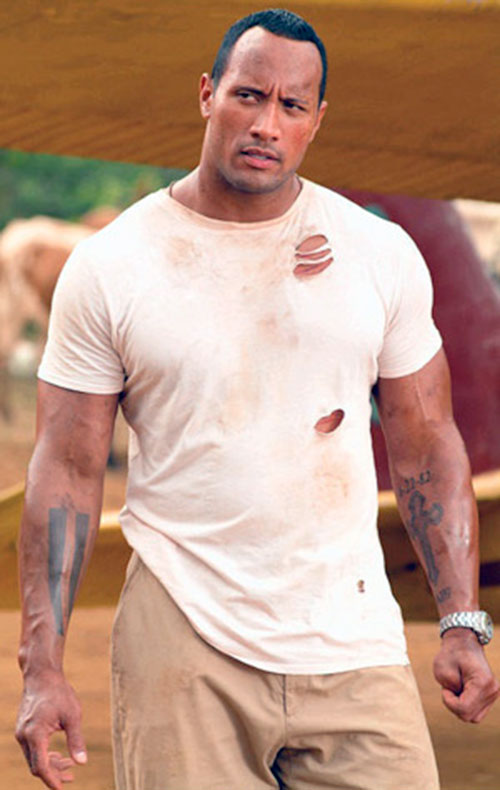 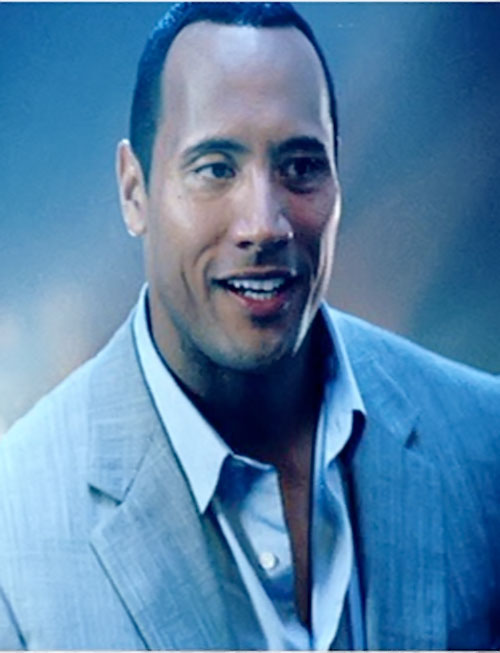 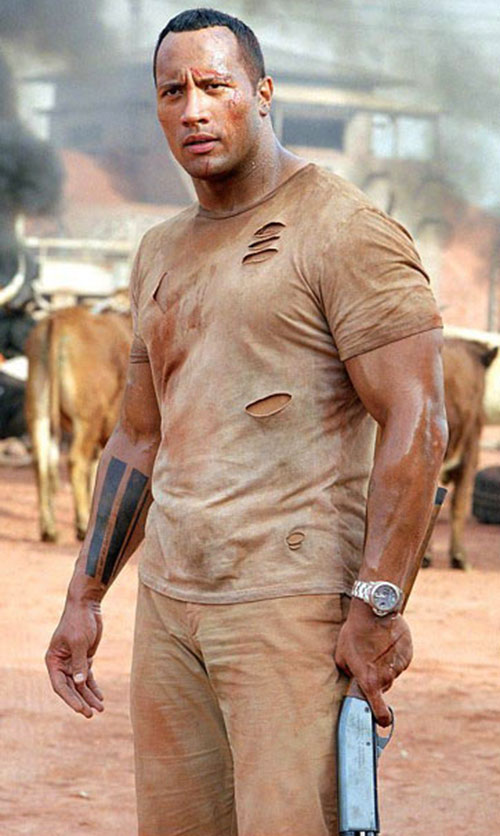 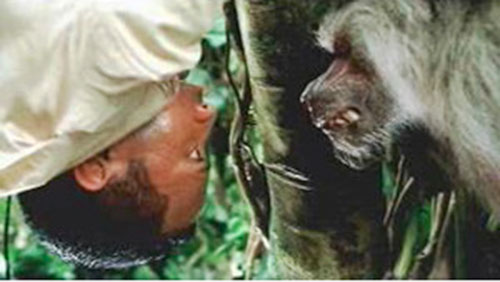 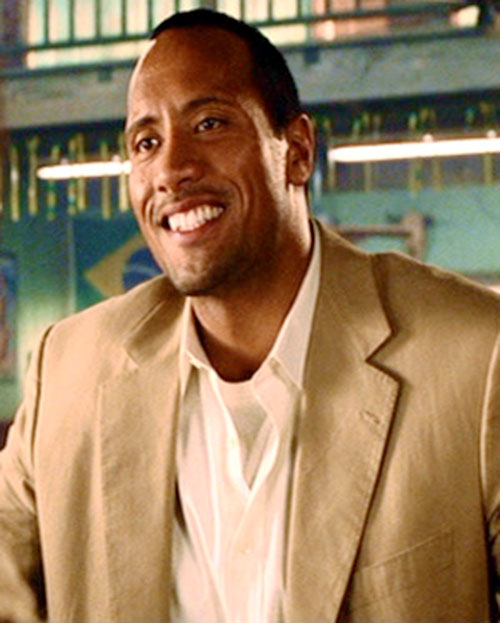