Bedlam’s has mind-over-matter and telepathic abilities – which he collectively calls his “brain blast”. He was already powerful right after he was transformed, and his might continued to grow within the cocoon over the decades.

But that’s not all !

Furthermore, Bedlam can telekinetically construct his headquarters pretty much anywhere in record time – or assemble machines from parts within seconds. His telekinesis works at superhuman speeds.

He can extend the green aura surrounding his head whenever he uses his “brain blast” to cover and protect his entire body. However, he has to be aware of an attack to stiffen part of this field against it.

Bedlam can also project psionic  beams of force that hit with the force of a cannon. Apparently, those need to be aimed at a living, thinking being.

For instance, it doesn’t seem that Bedlam could telekinetically blow a hole through a wall. But he can mentally blast somebody on the other side of wall. In so doing, he’ll blow a hole into the wall since it stands between the psionic force and its target.

Bedlam seemed to have some technological skills, though it’s not quite clear. He also seemed to be physically robust, but this is hazy.

He may have psychological blocks against using his full power against his creator. His defeat at Hudson’s hands is otherwise hard to understand. Even Bedlam couldn’t explain Hudson beating him.

Circa 1969, Canada’s Department H, working to develop a Canadian super-hero team, was threatened with closure. Despite years of research, it had only recently acquired its first superhuman agent — named Logan — and had but one still-crude exoskeleton prototype.

The dates used in the History section are NOT official ones, and are just used out of convenience. See the Alpha Flight main article for more about this timeline.

Director James MacDonald Hudson grew desperate to keep his department alive. He had recently obtained a crude process to activate mutants. That presumably was a side-product of the research project of his top biologist, Dr. Walter Langkowski. It could only work on a specific type of mutants, however, and finding even one such subject in all of Canada proved difficult.

Hudson eventually found that a psychotic killer held in a provincial Nova Scotia prison was such a potential superhuman. He had the man brought to the Department H base, wrapped up like a mummy and subjected to the treatment.

Logan was extremely sceptical about the whole thing. Furthermore, he was worried about what Hudson would do with a super-powered murderer. For the sake of Department H and to eventually provide Canada with super-heroes, Hudson crossed that river anyway.

The treatment used to awaken the con’s mutant powers was very slow. Worse, it swerved in an unexpected direction as the unconscious murderer’s body started secreting a disgusting, alien-looking cocoon. Hudson code-named the subject Bedlam, perhaps as a comment about his own folly . 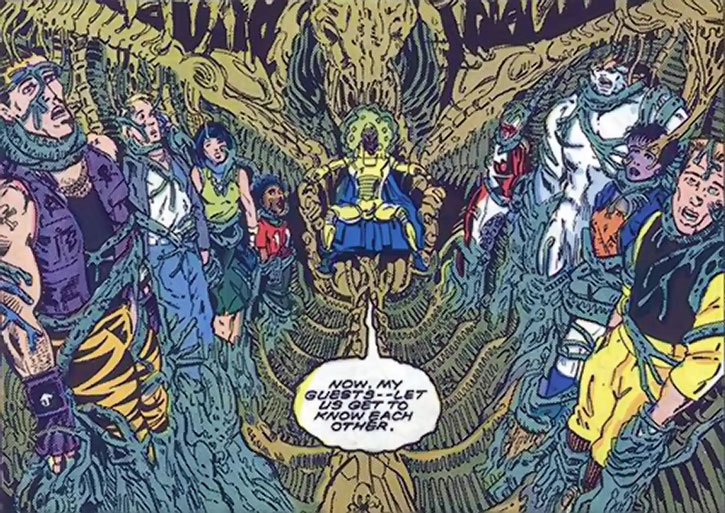 That it all was a very bad idea was confirmed when Bedlam awoke. Now transformed into an alien-looking thing, he was determined to kill everything and in particular James Hudson. Thankfully, Bedlam’s powers were not as powerful as they would later become. After Wolverine softened him up, Hudson defeated him using his prototype exoskeleton.

Bedlam was shoved back into the cocoon. There, he was kept in a sort of suspended animation by medical equipment. But Department H was not closed down. Perhaps the Bedlam failure, by proving that there was something exploitable out there, bought a respite.

As to the cocooned psycho-killer, Hudson decided to just hide the lab he was held in. Nobody had a clear idea of what was going on inside the cocoon, but Hudson couldn’t bring himself to unplug the medical support equipment.

Logan wanted to just kill the subject. Thus, Hudson ended up agreeing on adding an automated telephone alert which would play a pre-recorded message if anything ever emerged from that cocoon.

The lab was successfully hidden, and would lie undiscovered for almost 20 years.

In 1987, Alpha Flight’s government liaison, Gary Cody, discovered data about Department H‘ 1960s activities. These were projects that had never been reported to Hudson’s higher-ups. After the data was decrypted, Cody led a solo investigation in the hidden past of H and found the secret lab holding Bedlam.

Watching the alien cocoon, Cody could see that *something* had obviously worked. He was fascinated by the potential of Hudson’s desperate project. The activation of latent superhumans could be an enormous asset for Canada, or perhaps its greatest threat.

As he reflected, Cody foolishly cycled the medical equipment managing the cocoon. This freed the subject, who immediately killed him and fled. Thankfully, the old alarm worked, and Wolverine received the recorded message over the phone.

By the time Wolverine could reach Alpha Flight at Tamarind Island, it was too late. Bedlam had found his bearings. He decided to kill James Hudson then create an unstoppable master race of superhumans – his twisted version of Hudson’s life work.

Bedlam discovered that Hudson was dead – but his wife Heather was still alive. In a leap of psychotic logic, Bedlam decided that she was his “mother” in the same sense that James Hudson was his “father”.

Bedlam destroyed Alpha Flight’s base and captured the team – except for Box, who escaped. He then started looking for potential superhumans to activate. Canada still had slim pickings in that department, but Bedlam happened upon a number of mental patients who had been turned into superhumans at the New Life clinic.

He kidnapped them from the government hospital where they were being treated. The patients were renamed Breakdown, Freakout, Janus and Goblyn.

Bedlam then flew to the Arctic Circle. There, he telekinetically built a base and detained the kidnapped superhumans. Ranting and raving, he decided that he would have all of them fight each other and have the winners serve him.

However, Alpha Flight turned the tide through teamwork and convinced the mental patients — now called the Derangers — to side with them against Bedlam.

Bedlam downed and possibly killed most of the Derangers to diminish the number of opponents. This made it possible for him to psionically freeze anyone still standing. However, while Heather Hudson was frozen, she could still think… and thus activate her suit’s systems via cybernetic control. She used this to decapitate Bedlam with a point-blank energy blast.

Bedlam’s appearance, cocoon and Arctic base seemed patterned after H.R. Giger ’s designs for the Alien movies (see the writeups.org profile for Aliens). The simplest explanation might be that Bedlam was impressed by the movie and patterned his schizophrenic delirium on them since he felt those expressed something about him.

A less likely explanation might be that Bedlam is linked to the Brood. Perhaps Bedlam was implanted with an ’infiltrator Brood” embryo but his own psionic potential rendered the alien embryo comatose. Driven to murderous insanity, neither human nor Brood and thus not in contact with the Brood telepathic network, this singular creature would have been misidentified as a mutant.

Bedlam is a raving psycho on a power trip. Furthermore he’s devoured by an incoherent obsession about James MacDonald Hudson – toward whom he developed psychotic father issues.

Bedlam’s core ability is that he manipulates everyone and everything with his sheer will. And he chiefly uses this ability for torture, exposing secrets, linking minds against the persons’s wishes, forcing people into fights, etc.

Bedlam happily lies and manipulates through words and illusions, generally attempting to make everybody as unhappy, pain-ridden and crazed as he is.

(To Heather Hudson) “You’ll not survive ! Guardian created me ! He was my father — and I was in many ways the child you and he could never have !”

“What makes you think you have a choice ?”

Drawbacks:
Strange Appearance, Catastrophic Rage, Minor Psychological Instability, Loss Vulnerability (All of Bedlam’s OVs and RVs are lowered by 2 CSes against James MacDonald Hudson – or somebody he believes is James Hudson – and he cannot spend HPs against him).

Bedlam’s success rate with establishing telepathic contact with people in altered states of consciousness is poor – which is ironic given his own mindscape.

This hindrance affects all his telepathic powers – Chameleon, Control, Life Sense, Mental blast, Mental Freeze, Mind Probe, Telepathy. A person in an altered state of consciousness can either enhance their OV/RV against Bedlam’s telepathic Powers by 3CSes, or double their defensive abilities such as Mind Blank, Mind Field, etc. – their choice.

Examples of altered states of consciousness hampering Bedlam have included deep berserker rage, having one’s mentality fused with machines, and massive brain damage. If the GM is not quite sure that a given state should qualify, award a +1 or +2 CS bonus. 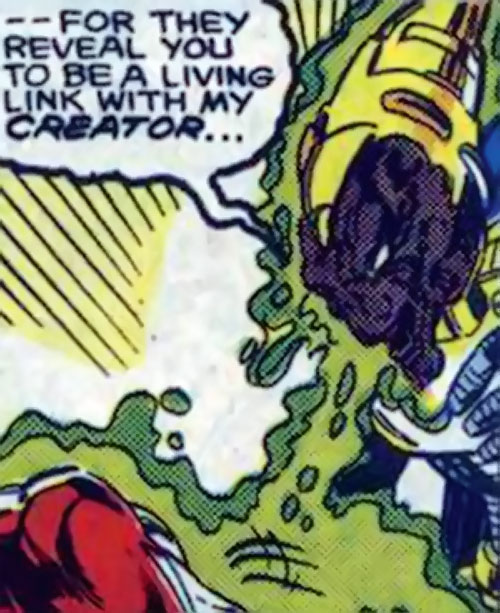 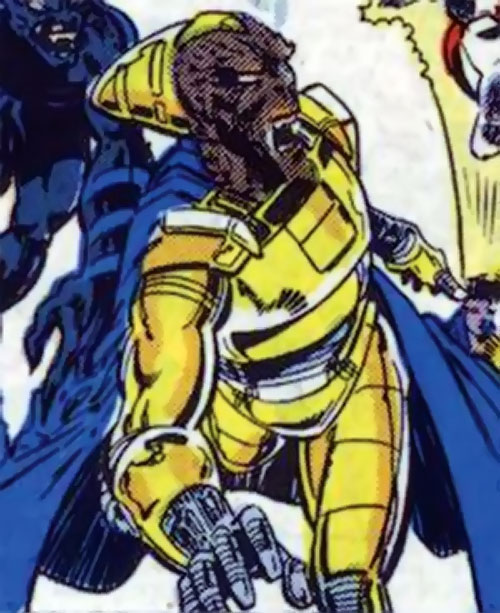 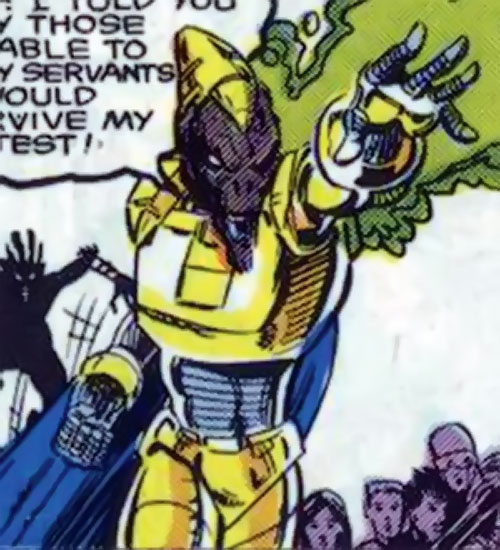 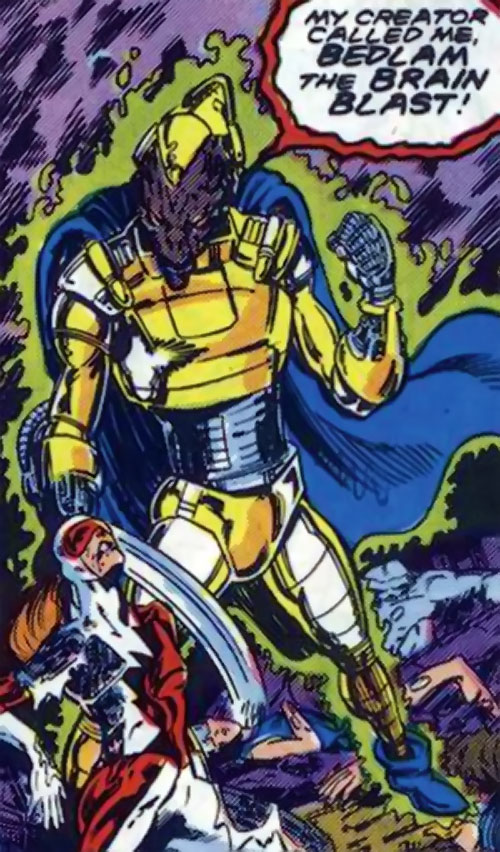 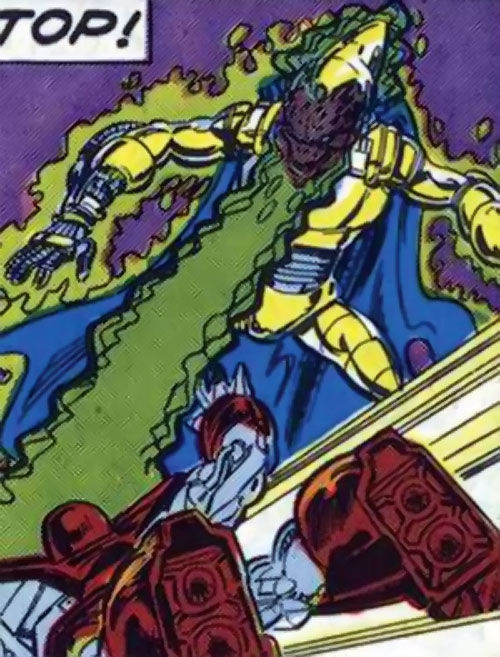