Bella is now a newborn vampire and no longer the klutzy girl she once was. She doesn’t have to sleep. She doesn’t get tired or have to rest or catch her breath.

She has inherited all of the powers associated to her new form. Superhuman strength, superhuman speed, rock-hard skin, heightened senses and a very quick regenerative ability.

On the flip side Bella also got the associated vampiric drawbacks. In particular the thirst for human blood. However, she has joked her “super-power” is super self-control.

Her new immortal life must be kept a secret or risk the wrath of the Volturi, who enforce the vampire law.

Lastly, to complicate her ability to hide, her skin is ice cold and sparkles in sunlight.

She has maintained all of her psychic abilities she had in life. With help from her Alaskan “cousins” she recently learned how to project her psi-shielding onto others.

Bella developed a little telepathy by the end of the film, sharing her memories with Edward.

Bella awakened as a newborn vampire, eyes red with human blood. She took in her surroundings feeling out her new senses. Dust particles could be seen floating in the air, she could hear distant animals and smell their blood on the air.

Edward took her hunting, as a newborn Bella had an incredible thirst. When she caught the scent of human blood on the wind, a rock climber, she went after him. Amazingly, she was able to restrain herself. Upon returning home Bella learned that Jacob imprinted on Renesmee and was furious but still allowed him to stay near her.

Alice gave Bella a cottage as a birthday present so she and Edward could have some privacy. The Cullens decided they’d eventually have to lie to Charlie. They’d tell him Bella had died so he could mourn and move on.

Then they too would move on, to another area. Carlisle commented that they would come back to the area at another time, perhaps in a few decades. Jacob had to do something, he had to be near Renesmee. 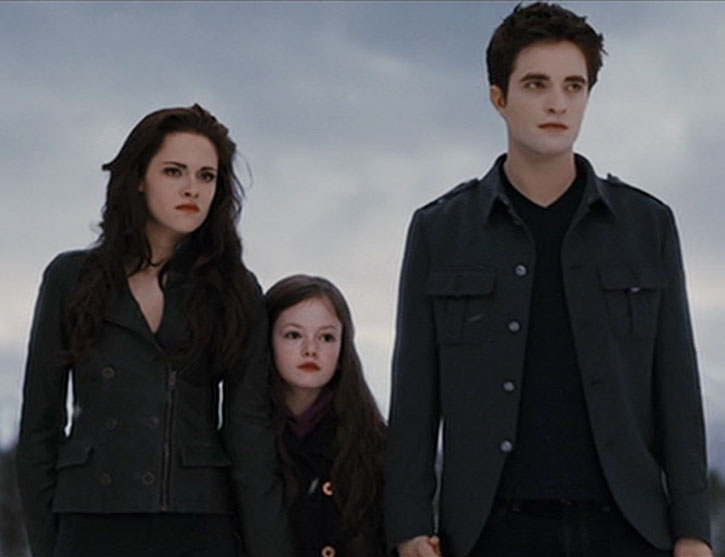 So, Jacob drove to Charlie’s house and told him Bella was alive and at the Cullens but that she was different. Then he transformed to his wolf form in front of Charlie revealing his secret. Charlie met Bella and could tell she was different but took it all surprisingly well.

Renesmee continued to grow. Irina, their cousin from Alaska, was coming to visit when she watched Renesmee catching snowflakes with Bella and Jake. She believed Renesmee was an immortal child, a crime by Volturi law. She immediately went to the Volturi with the information. She stood with them against the Cullens.

Alice had a premonition. She sees the Volturi coming for them. The Cullens made a decision not to fight but to request help from Carlisle’s contacts around the world. Those contacts would witness to the Volturi about Renesmee, that she is not immortal.

They went first to their cousins in Alaska then to others around the globe. Alice and Jasper went off on their own. They left behind a note telling when Volturi would arrive. Bella noticed the note was actually a page from a book in her home. Inside the book was another note for her alone. J. Jenks and an address.

Riders on the Storm

As Carlisle’s vampire friends came, more Quileute’s phased. The vampires numbered 27 in total. They promised not to feed on humans in the area while they visited.

Bella was known as a “shield” for her resistance to mind reading and illusions. This meant her mental abilities allowed her to defend against mental attacks. 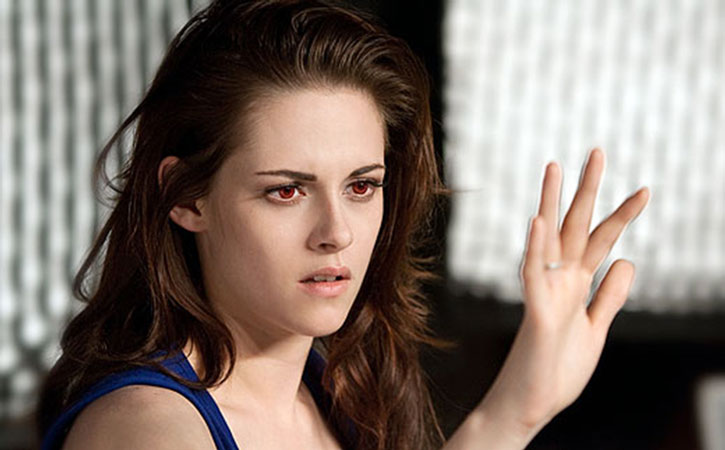 Bella drove Jake and Renesmee to Charlie’s and she drove into the city to meet with J. Jenks herself. J. Jenks supplied her with two fake IDs for Reneesem and Jacob just as Jasper had requested. Bella was shocked there were only two IDs created.

She wrestled with the knowledge that Alice saw that Renesemee would have a future but she and Edward would not be a part of it.

That night, all the vampires along with Jacob and Renesmee gathered around a camp fire and talked of old battles. The next morning they met the Volturi on an empty open snow covered field. Jacob, Sam, and the rest of the pack joined the Cullen’s side. The Volturi still outnumbered them two to one.

Aro read Edwards thoughts by touch and sees the truth, that Renesmee is not an immortal child. Aro then demands to meet Renesmee. She communicates with him through touch and he is astounded by her, a half-immortal. For giving incorrect information, Irina was killed and burned right there. Her Alaskan sisters had to be restrained.

Aro then tried to entice the Cullens to fight by having Jane use her pain ability on Edward. Bella was able to shield all of them from her. Aro reasoned with his followers that even though no crime had been committed Renesmee should still be killed. The unknown. What she will become is more dangerous than a battle with the Cullens and wolves today.

Just then, Alice and Jasper arrive to let Aro know what the future holds for Renesmee as Alice had already seen it. Aro need only touch her hand and he would know what her premonitions have shown about the child… but would it be enough to convince him?

Bella’s skin is naturally pale; becoming a vampire only enhanced this as she became still paler. Her new vampiric regenerative powers took away every blemish in her skin and left it smooth marble.

She wears more black leather since becoming a vampire.

Bella has become more assertive and aggressive with her newfound powers. She has no problem punching someone to get her point across.

While still getting used to her new abilities, Bella sits up bolt-straight. She has to remember to move her shoulders pretending to breathe when trying to fit in around humans. She sometimes moves at superhuman speed without meaning to or unintentionally crushes objects with her superhuman strength. 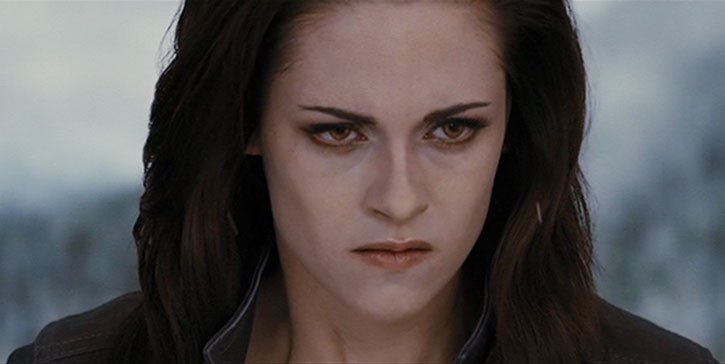 When her father wanted an explanation about what happened. Bella refused to tell him. Similar to Edward in twilight she explained it was for his own safety. She persuaded him to just accept that she is ok.

Bella is very protective of her family and will fight to protect them.

I think it would be interesting to have these two vampire love stories cross paths. There are lots of similarities in these stories.

Here is a good blog  on the similarities and differences.

One major difference that you’d have to deal with in a combined universe is; in Trueblood the vampires have “come out”. They are no longer keeping the secret of who or what they are from the humans. In twilight secrecy is the Volturi’s most absolute law.

So, who’s in charge? The Volturi or The Queen? I’d suggest that Aro is a high ranking individual in the Queen’s hierarchy.

Aro would love to challenge the Queen for rule but at this point is content to control his variety of vampire.

Bella meeting Sookie could be interesting especially before Bella is a vampire. Sookie would probably be shocked that she couldn’t read Bella’s mind.

(Bella gives Edward a crushing embrace after rising as a vampire)
Edward: “Hey Bella. You’re a lot stronger than I am right now. It’s your turn not to break me.”

Bella: “You imprinted on my daughter !?”
Jacob: “It wasn’t my choice.”
Bella: “She’s a baby !”
Jacob: “It’s not like that. You think Edward would let me live if it was ?”
Edward: “I’m still debating.”
Bella: “I’ve held her once, one time Jacob and already you think that you have some kind of moronic wolfy claim on her ? She’s mine !” (Slams Jacob to the ground, Edward laughs ; Leah and Seth arrive in wolf form)
Jacob: “It’s fine, Leah.”
Bella: “You’re going to stay away from her.”
Jacob: “You know I can’t do that.” (Bella punches him in the chest causing him to fly through the air and land roughly)
Esme: “Stop her Edward.”
Edward: “It’s fine. She’s amazing, right ?”
Jacob: “Do you remember how you wanted to be around me three days ago ? That’s gone now right ?”
Bella: “Long gone.”
Jacob: “Because it was her. From the beginning it was Nessie who wanted me there.”
Bella: “Nessie ?! You nicknamed my daughter after the Loch Ness monster ?!”

(After her first meeting with Charlie after becoming a vampire)
Jasper: “Well done Bella, I’ve never seen a newborn show that kind of restraint before.”
Emmett: “I’m not sure she *is* a newborn. She’s so tame.”
Edward: “Emmett don’t antagonize her, she’s the strongest one in the house.”
Emmett: “Please.”

“My time as a human was over but I never felt more alive. I was born to be a vampire.”

Edward: “Benjamin can influence the elements.”
Bella: “And here I get super self-control.”

“It’s strange. Physically I feel like I could demolish a tank. Mentally I just feel… drained.”

Edward: “Hey Bella, I’ve a bad habit of underestimating you. Every obstacle you’ve faced I didn’t think you could overcome and you just did.”

Bella: “No one has ever loved anyone as much as I’ve loved you.”
Edward: “There’s one exception.” (They grin and kiss)

Bonuses and Limitations:
Acrobatics (Climbing) is a Powered skill.

Advantages
Attractive, Immortal, Life Support (No need to sleep or breath), Financial Backer (Filthy Rich – the Cullens), Schtick (All about ME!), Stabilization.

Bella is a newborn vampire and as such has great strength. She will maintain this incredible strength only through the first few months because of the residual blood that’s in her tissues. After that her Strength will drop to 07 APs. 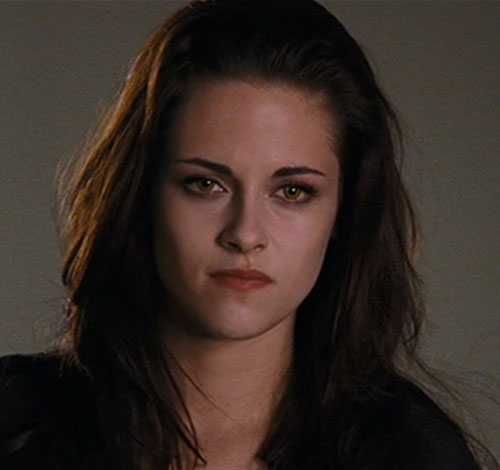 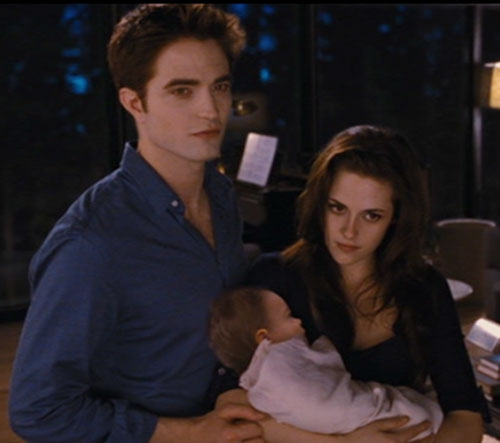 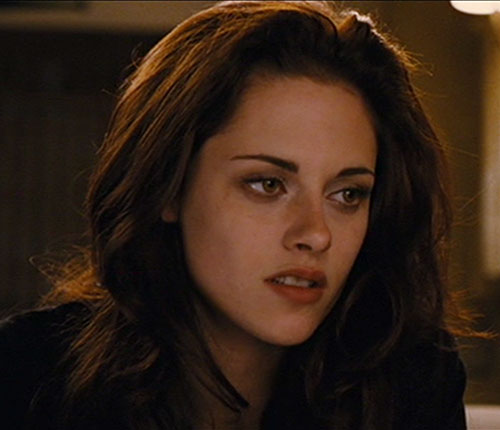 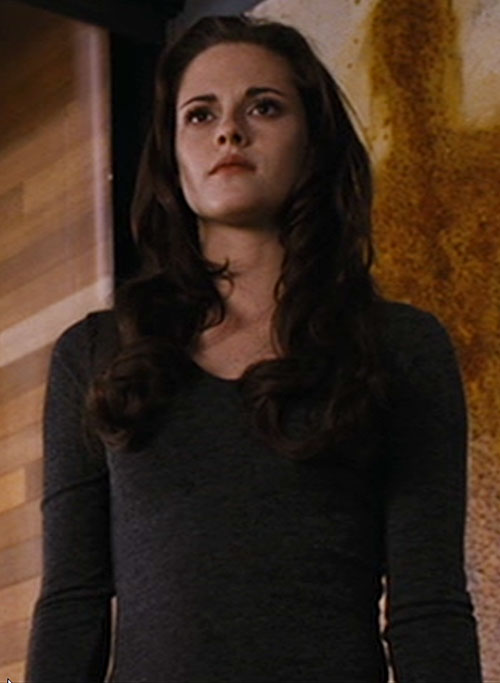 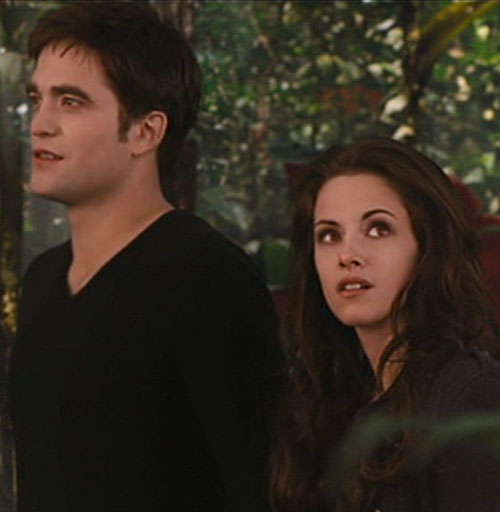 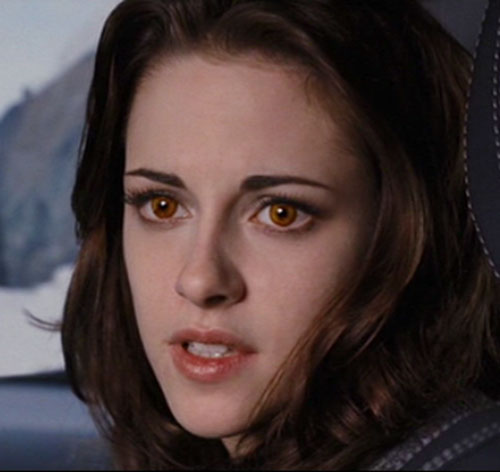