Bengal is a very proficient martial artist. He was able to match the early Night Thrasher in combat, but was outclassed by Daredevil. He can hit extremely hard – if wielding a tough melee weapon, he could shatter parts of Night Thrasher’s body armour.

His training includes a host of warrior-monk-like skills, and he’s very good with those, too. For instance, the Bengal is skilled at pain management. As an example, he was still fighting after Daredevil shattered both his ulna and his radius to stop him.

The Bengal carries two knives with broad, leaf-shaped blades. Those can spring open in a sai-like configuration. Those later became ordinary sai, though this was probably an artistic mistake. He also occasionally uses a bow, which seems made of bamboo, and carries a few throwing stars as an extra option. 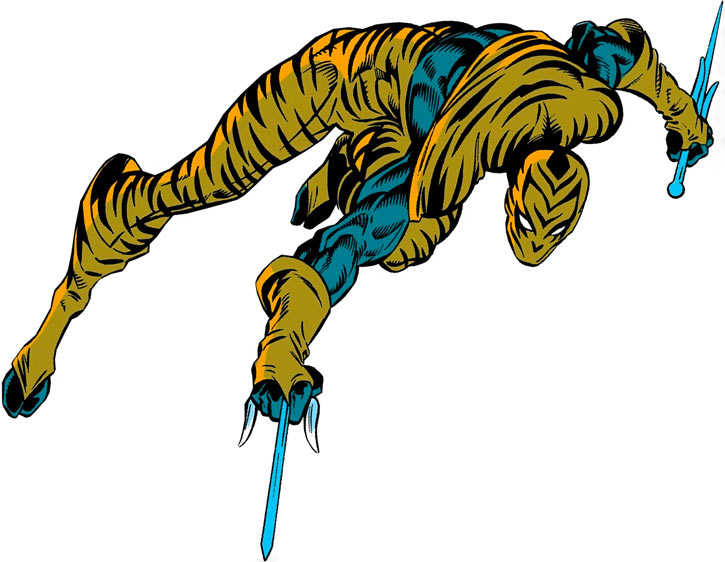 Bengal is also superiorly stealthy and an accomplished adventurer and assassin. He can be considered to be a ninja-type, though of course he has little association with medieval Japan.

Despite being a stranger in a strange land and not speaking the language, the Bengal seems to be extremely perceptive. He could understand complex situations (such as Jane’s redemption and asking for pardon) without verbal communication. It was later confirmed that Bengal is a superiorly observant and intelligent man.

Bengal is one of the Marvel characters with clear ties to the Việt Nam invasion by the US. Since the dates of that war are historical and well-known, it makes his biography increasingly problematic as these events recede in the past. Bengal appeared in 1988, when it was still workable for him to be in his mid-20s. But that was 29 years ago as of this writing.

The two usual fixes are :

The man who would become the Bengal was born in the early 1960s in the central highlands of Việt Nam, near Buôn Ma Thuột . It is likely that he’s from one of the Montagnard cultures .

In 1968, an exhausted American fire team entered his village. One of their member, Sgt. Janes, was cracking from combat fatigue. A grenade was thrown at the Americans. The unit’s Lt., Lincoln, managed to throw it away but was grievously wounded in the explosion, eventually losing his sight.

Janes snapped and opened fire, immediately followed by the others. Dozens of villagers were indiscriminately massacred before the fire team would retreat, carrying Lincoln. The Americans emptied pretty much everything they had, slaughtering everything they saw in the village. They also lighted up trees they thought served as cover for VC troops.

Part of the carnage was seemingly caused by indiscriminate return fire from the jungle from Việt Cong soldiers. If so these likely were the same men who had thrown the grenade at the patrol.

The Edmond Dantès of the Degar

One child escaped from the carnage, and went berserk. The six-year old charged the Americans with an empty gun as they were being evacuated by a Huey piloted by James Rhodes, USMC. Despite being shot in the leg by someone in the woods, he managed to jump and grab a skid. Shellshocked, Janes started stomping his face and hands until the kid lost his grip and fell back into the jungle.

The kid survived the fall. Traumatized by both the events and survivor’s guilt, he decided the reason he was still alive was that he could be the agent of vengeance for his village. He dedicated his life to training, and to get to the US when he was ready to find the soldiers. When he did so, he was wearing a costume and calling himself (in Vietnamese) the Bengal.

(Why a Vietnamese man would name himself after an area in India and Bangladesh is unclear. But the Lee Falk comic strip The Phantom has been released in many countries as The Phantom of the Bengal. It is very popular in some areas of India and further East. It is thus reasonable to suggest that Bengal may have been inspired by the Phantom.)

Did the jungle breathe?

Meanwhile, the American soldiers went on with their lives. At least one of them, Janes, was court-martialed and found guilty. During his 25 years in prison at Quantico , Janes craved redemption for his actions and found God, then studied to become a priest.

When he got out he was ordained. He took his ministry to a series of poor and violent urban areas, where he tried to bring peace and understanding.

Meanwhile the Bengal started by murdering Chin Fong, who had been one of the soldiers kicking him off the helicopter. He then killed former private Samuel Birulin in his home as he was sleeping with his wife. The avenger then moved on to kill the former Lt. Lincoln.

Lincoln realised what was going on, as he had been on the phone with Birulin, discussing their traumatic flashbacks, when he was executed.

Willie Lincoln had encountered Daredevil and Matt Murdock a few years earlier. He was a former client and ally of Murdock, saved his life once, and knew Daredevil would sometimes “assist” Murdock. Thus, he contacted him for protection.

The devil and the wolf

The Bengal clashed unsuccessfully with Daredevil. He then came back to challenge him to a fight among the trees of Central Park, where Daredevil defeated him. When the Bengal woke up, Daredevil forced him and Lincoln to face each other. Seeing Lincoln’s empty eye sockets, the Bengal reacted with horror.

Now unsure about his vengeance, he crashed through the window and jumped away.

The Bengal eventually resumed his path of vengeance, this time targeting former private William Talltrees. Talltrees, the most level-headed of the group, had tried to oppose Janes and private Fong from kicking the boy away from the Huey, but not strongly enough.

Talltrees had become a high-rise construction worker, then the newest bearer of the mantle of the Red Wolf. But was still wracked with guilt over what he did.

When the Bengal confronted him, Talltrees did not really fight back due to his guilt. He ended up hospitalized in a critical state. His pet wolf Lobo was killed by the Bengal.

While dying in the ER, Talltrees underwent a series of visions and a dialogue with the Wolf Spirit. Understanding that his constant guilt had made him a better man and a hero, the Red Wolf mustered the will to survive his wounds.

The Bengal then moved on to the former Sgt. Janes. However, the superhuman Silhouette was present in his church when the Bengal attacked, being part of Janes’ flock. She fought the Bengal off until Janes could flee, then shadow-melted away. Her former lover, Night Thrasher, decided to protect Janes and intervened during the Bengal’s next attack. 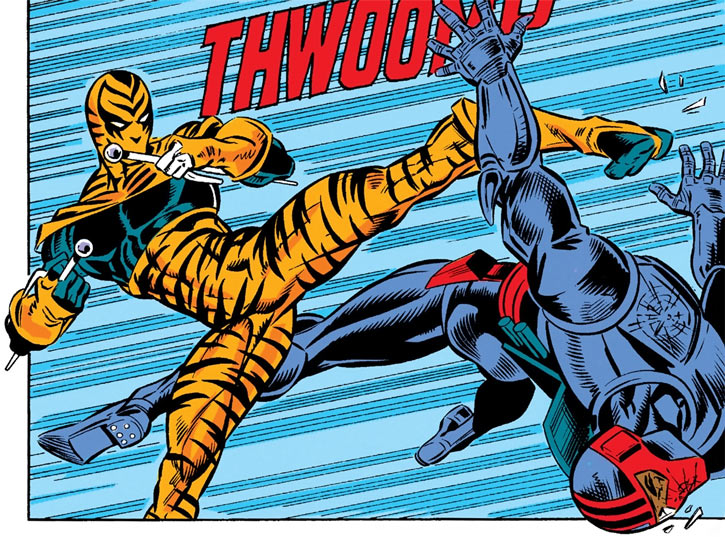 Janes and the Bengal apparently tried to stay in touch and communicate. They presumably had help from an interpreter from the local Vietnamese-American community. Janes gave his version of the incident. In particular, he stated that many of the gunshots (including the one that had hit the future Bengal in the leg) did not come from them but from the jungle.

The Bengal investigated Janes’ claims. He grew to suspect that Li Pan, a North Vietnamese general with a reputation as a mass murderer, was responsible for some of the deaths at his village. He also discovered that Li Pan was now known as Gai No Don.

The Bengal confronted him. However, Gai No Don did not appear to speak Vietnamese. Sensing that he was guilty anyway, the Bengal moved in but was stopped by Night Thrasher and Silhouette. They had been warned by Father Janes. Their own investigation had determined that Gai No Don and Li Pan were two separate persons.

The Bengal then attacked the Poison Memories, a Vietnamese-American street gang involved with Gai No Don. Thrasher and Silhouette intervened again, until Bengal accepted that Li Pan and Gai No Don were not the same man.

The Bengal was later seen as a henchman for Tombstone, opposing the “Marvel Knights”. Howbeit, the characterisations during that episode were completely off. For instance the Bengal was a violent mercenary speaking fluent English and familiar with American and Chinese adventurers.

Much like with Big Ben Donovan, I’d suggest disregarding this appearance when it comes to the character’s continuity. But officially, for Marvel, this episode did feature the actual Bengal. 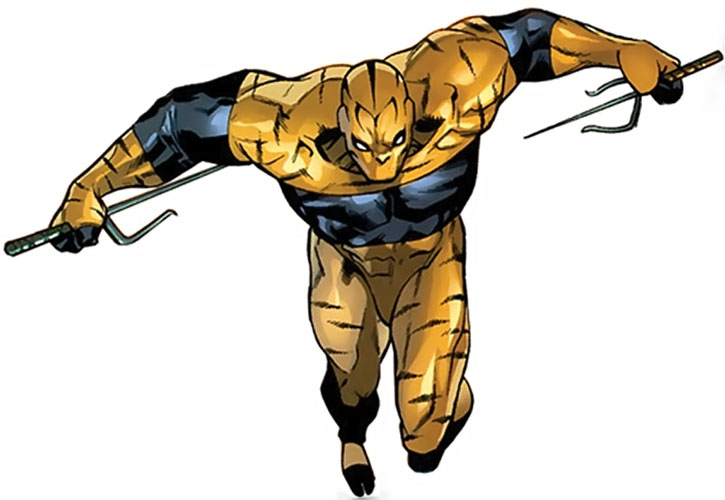 A likely hypothesis is that this man was just a mercenary wearing a replica the Bengal’s costume. It is a pretty cool and striking costume, after all. This person seemed trained in Kung Fu and very interested in confronting Shang Chi, and may thus have been Chinese.

If the man seen during that incident was indeed an impostor, it is likely that Bengal was at that time in Việt Nam to track Li Pan down.

The Bengal is shaved bald and has very strong muscle definition. He fights powerfully, gracefully and in complete silence.

He originally knew but one sentence in English, which he speaks with a strong Vietnamese accent — “did the jungle breathe”. The “breathing jungle” was a slang phrase used by some American troops to describe a patch of jungle full of Viet Cong soldiers silently waiting in ambush.

The Bengal is a dedicated and competent avenger, but sometimes seems conflicted when it comes to actually killing in revenge. I suspect he’s a Buddhist to some degree, or perhaps a follower of one of Việt Nam’s local religions (some of which include big dollops of Buddhism). Thus, perhaps he has trouble reconciliating his mission of vengeance with his faith.

He rarely speaks, even in Vietnamese. Since most people would not understand him anyway.

Despite the language barrier, he finds tricks to roughly communicate. To defy Daredevil, he gave him a piece of a map of Central Park (wrapped around an arrow), and he unmasked himself so he would be identified by his targets.

The Bengal would most likely be a Batman or Nightwing encounter in the DCU.

Bonuses and Limitations:
Empathy is a Skilled Power.

Drawbacks:
Exile (Voluntary), Misc.: Bengal does not speak or understand English, though he seemed able to read some bits of it, such as the name of his targets. Even then he probably just recognized the shape of the letters. In his later appearance, he could speak a few basic words and more or less understand simple sentences with the help of his Empathy.

Equipment 2, Great Endurance, Instant Up, Language (Vietnamese and probably a Montagnard language such as Jarai), Tracking. 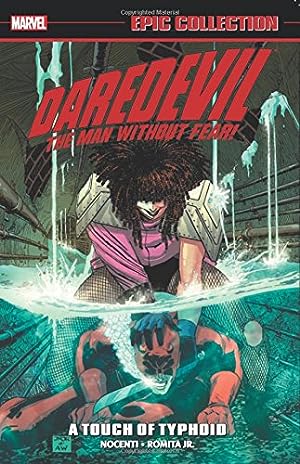 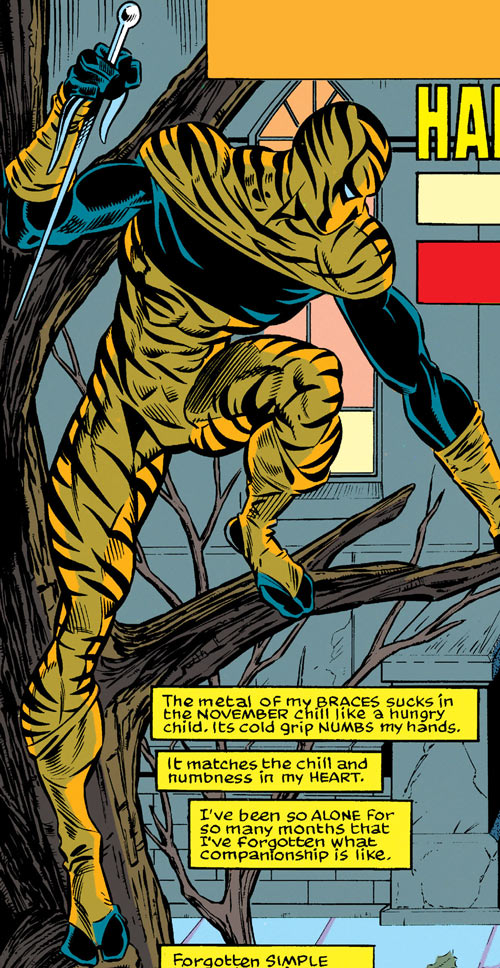 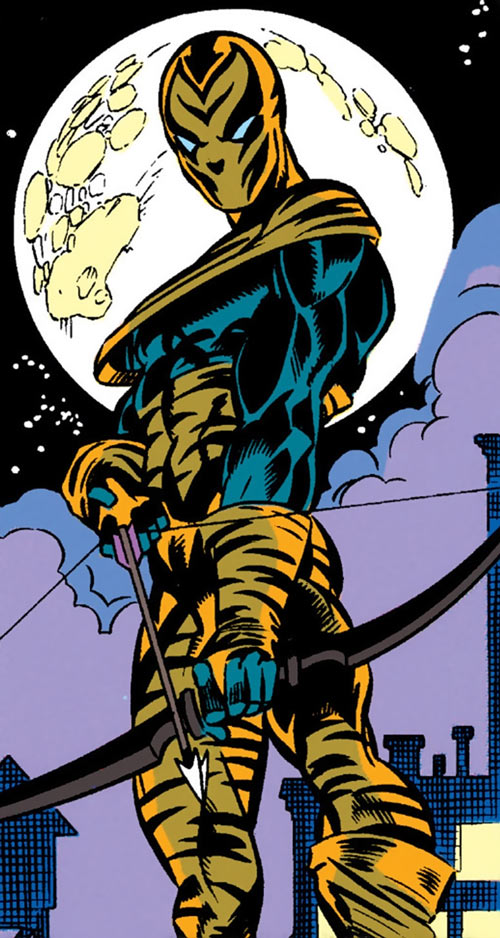 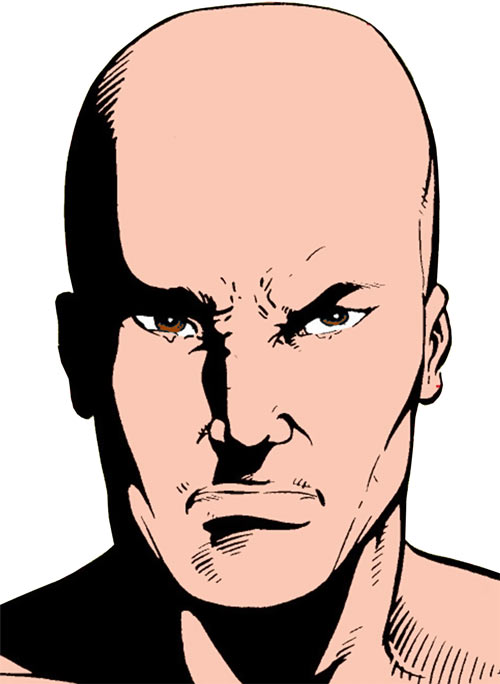 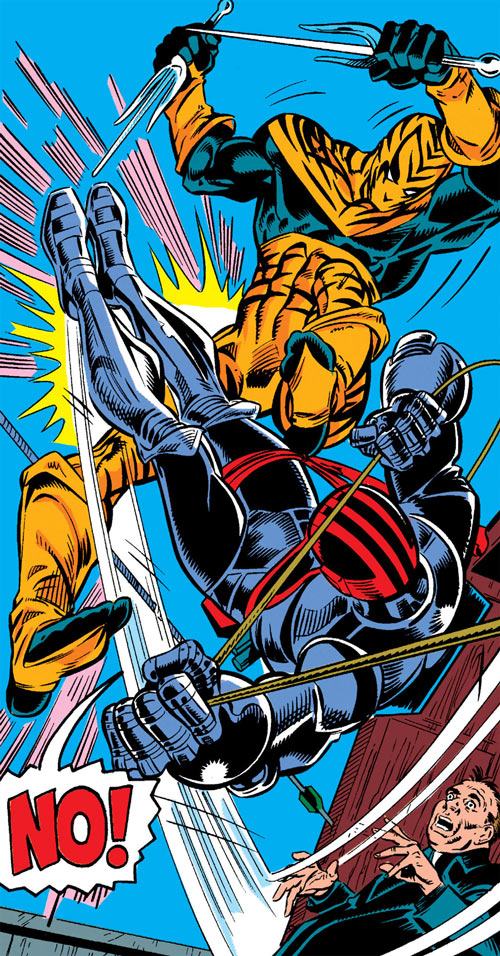