Benoît Brisefer is a series that started in 1960. Its creator was famous Belgian comics creator Peyo. It depicts the adventures of a placid, polite little boy who happens to have superhuman strength.

Peyo continued to publish Benoît Brisefer graphic novels until 1978. But the immense success of his Les Schtroumpfs (the Smurfs) meant that there only were seven Benoît Brisefer volumes from Peyo.

Benoît has superhuman strength, and unusual speed and accuracy. He can easily defeat a small army in unarmed combat.

He is most likely a mutant, possibly the only one in the world. Another noteworthy possibility is that he is the result of a secret lab experiment when he was an orphaned child, as he has no visible parents.

In addition to his purely physical abilities he has also been shown to be resistant towards hypnotic effects.

While Benoît is a remarkably nice, polite and helpful little boy, he’s not the sharpest tool in the shed. Even compared to other children of his age. He’s observant, but his ability to draw conclusions isn’t the best.

Benoît is a regular superman. But has little control over his superhuman abilities. This potentially has devasting effects since his nervous system is still that of an uncoordinated child.

His superhuman strength regularly breaks things. But that can be useful to display his tremendous strength before having some Personal Interaction with criminals, often to great effect.

Benoît’s great jumps rarely go wrong, and he jumps up to properly punch grown-ups when he is fighting. But he will wreak havoc on the pavement when coming to a stop after fast sprint. He also will devastate his surroundings with his undiscriminating super breath (or when sneezing) even when trying to be precise.

While he is hard enough to create a small crater on soft surfaces after jumping (even from planes), he might not be bulletproof. Since he once was stunned by a heavy suitcase hitting him over the head. Though on the other hand, he can somehow easily block bullets with his mitts.

He runs and swims about as fast as a car or a motor boat, and can even temporarily spring faster if needed. Benoît could get from Porto in Portugal to the border of France in about a 8 hours from.

He still does require sleep and nutrition as normal kids do however.

Curiously, the Brisefer lad loses all his superhuman abilities whenever he suffers from a cold (which always start with a surprise sneeze!). That lasts for at least a few hours or even days. That is also a time of relaxation for him unless he is in need of his powers just then.

He gets a cold approximately once every adventure, seemingly without reason. So one may wonder if his abilities aren’t actually connected to his biorhythm instead, like Zenith. The weakness at the nadir would be what Benoît interprets as a cold. Or maybe the cold is actually an allergic reaction.

Whatever the case, he will likely learn to fully control his great powers with age. He does seem less clumsy in later stories, and who knows where such a future could lead!

Benoît Brisefer’s adventures started in 1960. In the first 12 graphic novels, everything seems stuck in an idealised version of 1960 provincial France.

The door reads “open every Monday from 10 to 12 A.M.”, as an amusing jab at certain French shops of that time whose commercial drive wasn’t all that.

The timeline does advance a bit as more modern-looking cars and clothing slowly appear. But it’s still a quaint, out-of-time world.

Benoît Brisefer is an orphaned boy, aged about 10. He lives in a fine apartment all by himself in a small French town, Vivejoie-la-Grande. He attends school, and has won honors for good behavior and sports.

However, Benoît is most unusual in that he is stupendously strong. He tries to hide his abilities and do little good deeds in the world.

He helped stop a complex robbery on the central bank (Les Taxis rouges). He then stopped the career of a rogue robot criminal (Madame Adolphine). Some time later he helped eight old band members to retrieve land deeds that would make them all into multi-billionaires (Les douze travaux de Benoît Brisefer).

He aided his uncle, an intelligence officer, to safely escort a foreign minister carrying sensitive documents (Tonton Placide). One time he even got to show off and use his abilities in public in the employ of a traveling circus that would have gone bankrupt without his show (Le Cirque Bodoni).

After quitting the circus a Madam Demonia and her henchmen tried to recruit Benoît for her criminal activities. But as he refused this they tried to get him to get a cold to easier recruit him. This only resulted in the entire city getting a cold except for Benoît, at least early on.

Madam Demonia convinced the sick and captured Benoît that her uncle had a jungle disease. She persuaded him that he could only get better if she had an artifact from a museum. And so Benoît stole it.

Madam Demonia then used the artifact for a voodoo ritual against the rich and powerful. She took payment from them to “cure” them of the ills.

Benoît, however, met Demonia’s “uncle”. He informed the boy of the dark powers of the artifact. And so Benoît tracked it down, destroyed it and stopped down Demonia’s business for good.

The later adventures of Benoît are still being chronicled to this day, albeit by different authors.

Benoît is a small, blond boy. He always wears black shorts, a white shirt, a red jacket, a blue scarf and a black beret.

Benoît tries to help strangers in need and correct any minor wrong that he encounters. Naturally, at such a young age he’s also very innocent.

While he always tries to be completely honest he is not beyond breaking and entering to investigate a situation concerning something he deems interesting.

He hates firearms. He also gets furious if subject to injustice.

Most of his morals seem to come from his much-quoted schoolmarm, or common sayings.

He always warns the villains of his great strength when they confront him. But nobody ever believes him, until he has to use it. The authorities never believe the mall boy’s accounts either, in part because he’s an incoherent speaker when stressed out.

He spends his free time playing around or trying to find people to play with.

His great strength is a reason for why other kids are averse to playing with him. So despite being a kind boy, he’s often lonely.

He is wise enough not to show his great abilities to most people, as he realizes that it will cause problems. But he will talk about his abilities in stories that others take as fanciful invention. Or then he gets a cold just as he tells the story or they are interrupted by something before he could get to the proving point.

After having wreaked destruction he considers trying to get a cold so that nothing worse can happen. But that’s not really a comfortable solution either.

Benoît is happy most of the time, has a curious mind that needs satisfaction and lives his life well. This is despite having no parents, although a lady named Madam Minou does take care of his house and serves him his breakfast.

He is very confident in himself and finds social interests with those much older than himself. He gets along well with:

“This would not be the right time to get a cold !”

“I must warn you, don’t get any closer, because I’m very strong !”

“Nobody ever believes me… this is so unfair !”

“Because as you know I am very strong, but I lose all my power when I get a cold and this wouldn’t be the right moment for that, right ?”

Well, I imagine that Benoît will grow up to join the intelligence community through his uncle. He could well grow into becoming the greatest agent that France has ever had, and team up with Fleur-de-Lys!

Notes:
Benoît can somehow Block incoming projectiles, and Charges using his STR as a Dice Action.

To limit collateral damage, he will habitually employ all his Powers and his STR attribute at two column shifts below their respective maximum AP values.

All combat is of course Bashing Combat only. 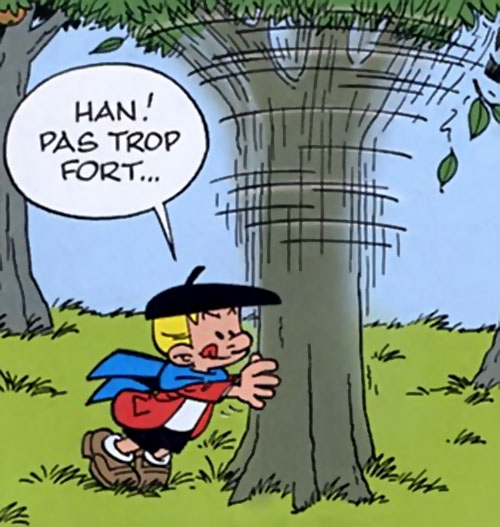 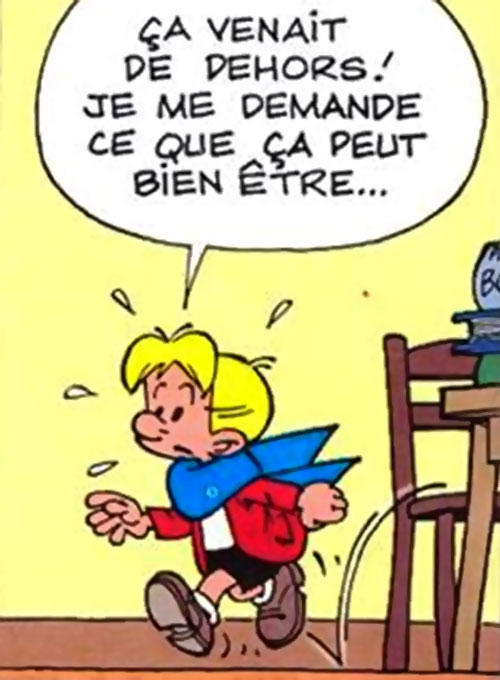 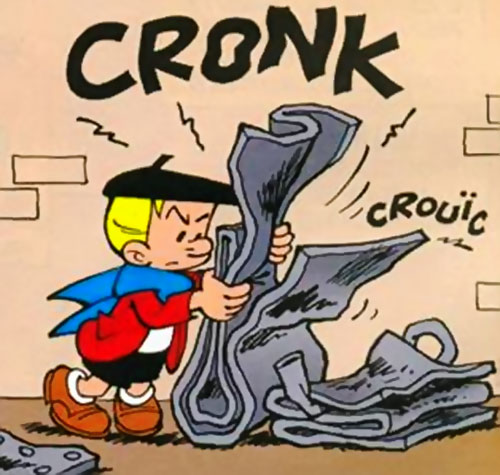 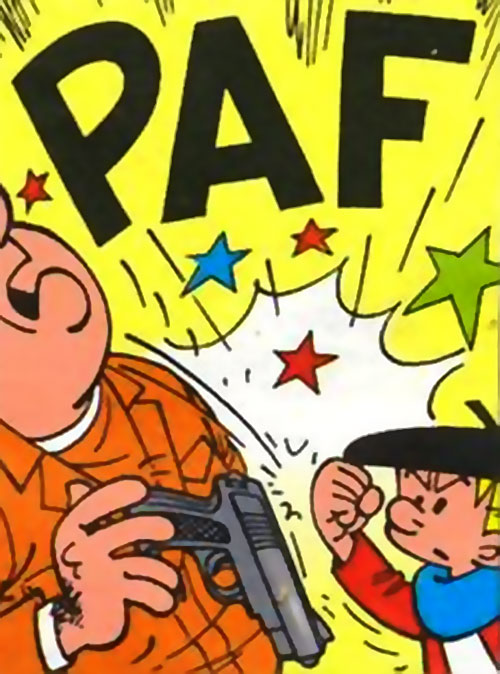