This entry is about the men and woman adventuring with Beowulf, Prince of the Geats, in his 1970s DC comic book. None of these characters were particularly fleshed out or distinctive – this is why they don’t have individual profiles. Therefore, many of the stats oscillate somewhere between “quite hypothetical” and “cookie-cutter”.

As the reader may note there are many parallels between this 1975 heroic-fantasy adventuring party and early role-playing campaigns. But then it all springs from a subculture sharing many of the same influences, since the amount of geek media back then was less than enormous.

These two Geat fighters (who look like Gauls, honestly) have been Beowulf’s companions, lieutenants and comrades-in-arms since they were but kids. They’re not as heroic as Beowulf, but they are superior fighters and seasoned adventurers.

They’re also loyal friends with a sense of humour, aggressive but disciplined warriors and capable lieutenants. They’re pretty much ideal companions for a hero of the Geats.

Hondscio fell to Grendel, who tore him apart.

Notes:
Wiglaf being of the same age than Beowulf, and a childhood friend of his, is a perplexing change from the source material.

Wiglaf bears no mention until the second half of the poem, many years later. Meaning when Beowulf has become king for 50 years and is battling the dragon to the death of both king and baleful dragon. Wiglaf, son of Weohstan, is depicted and clearly stated to be a young warrior and the combat alongside Beowulf to be his first battle.

It is far more meaningful to a man of the time, a scene of courage between the old meeting the final fate of a warrior with courage alongside the bravery of a youth, yet unmarked acting as the ideal retainer and young warrior when he could have found cause for cowardice as the other men did.

It was a tale for a warrior culture for telling among men who had fought or were soon to fight who could relate to the men of the story, who had fought beside fathers and older warriors and known the fear of fighting for the first time and conquered the fear. Men who knew duty and what is expected of them, men who led who could relate to Beowulf and his role, and those who would face death either for glory in raiding or to protect what they held dear from others who hoped to end their days with an honorable death such as Beowulf faced.

This blonde Swede is a warrior of Scylf’s tribe. She presumably was on a raiding party when her boat was caught by a Satanic whirlpool and crashed ashore near an entrance to the Underworld.

She was possessed by demons who forced her to become a servant maid of Satan, guarding this entrance with siren-like songs and luring sailors to also crash on the rocks. When Beowulf resisted her infernal song and punched her out, he somehow broke the possession.

Free from Satanic influence, the Scylfling joined the party. Despite the reticence of the Geats about the very idea of a woman warrior, she proved herself as an adventurer and fighter. Nan-Zee soon became Beowulf’s lover. Her knowledge of all things infernal, gained during her possession, often proved useful as well.

Nan-Zee talks a lot. She rarely hesitates to give anybody lip when it comes to asserting her independence and competence as a warrior. But she also is a faithful friend. She apparently had several sets of fur bikinis, coming in different colours (don’t we all). This being the 1970s, one set was made of leopard skin.

Advantages:
Expertise (Satan and the Underworld).

Connections:
Beowulf and his companions (High).

Drawbacks:
Misc.: being a young woman, Nan-Zee is not always taken seriously by the more patriarchal tribes.

Notes:
Nan-Zee is of course an addition the comics made to the cast. It was felt that an all-male roster was too old-fashioned for the daring, cutting-edge 1970s. Nan-Zee is named after Nancy Uslan, the wife of the writer, which is not awkward at all. 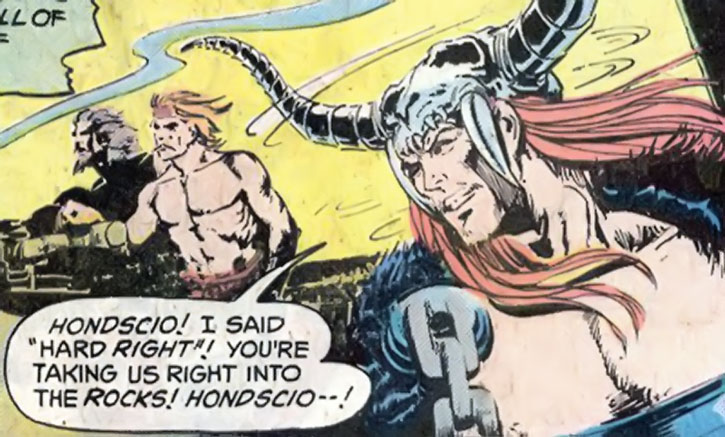 This apparently insane sorcerer/scop (a sort of bard) briefly met with Beowulf and his lieutenants when he prophesied Grendel’s attack. He later met them again at the mead-hall of the Spear-Danes. He had reached the hall well before Beowulf could – through teleportation.

At Hrothgar’s court, he prophesied the arrival of Beowulf. Shaper then volunteered to join his party after the first clash with Grendel.

Shaper has made it his mission to chronicle the exploits of Beowulf, having foreseen his great destiny. He’s thus the author of the earliest version of the poem. He much prefers cryptic pronouncements, made in the style of the poem – complete with kennings. He rarely talks in a straightforward fashion.

How Shaper’s magic works depends entirely on the plot. He can do astounding things one day (once summoning the Wyrd) yet find himself powerless to solve a situation on the next.

His sanity and ability to collaborate with others likewise seem haphazard. Thus, he’s closer to being an extra with the ability to push the plot forward via a prophecy, a teleportation spell, etc. whenever the writer taps him.

Bonuses and Limitations:
Determine the Shaper’s power level randomly for any given day. He has (2d10-2) APs of Sorcery (reroll each morning to know his power level for the day), and can cast (d10/2) spells per day, rounding up. Interestingly, the Shaper casts his spells by talking backward, just like Zatara. Less interestingly the backward sentences were lyrics from rock songs.

Advantages:
Expertise (Satan and the Underworld), Misc.: the Shaper has an additional +7 Special Range Bonus to his Teleportation and Warp spells using Sorcery or Rituals (+1).

Connections:
Beowulf and his companions (High).

Unferth is the unconventional champion of King Hrothgar, though there’s little he can do against the unstoppable Grendel. Rather than being a warrior, Unferth is a sort of rogue/sorcerer, favouring stealth and daggers in the back. He also knows a little infernal magic.

One surmises that while called a champion by convention, he served the Spear-Danes as something more akin to an assassin.

Unferth was very jealous of Beowulf. He feared that the mighty Beowulf would displace him as the royal champion. He tried to prevent the Geat from ever reaching the mead-hall using magic. Then he agreed to accompany Beowulf and his companions so he could seize an opportunity to murder him.

Unferth is a coward, especially compared to the hard-charging Beowulf party. Thus, he tends to disappear during fights.

He betrayed Beowulf and the party to a band of Babylonian Star Trek druids. I hate it when it happens.

Perplexingly, Unferth wears a Ditko-esque horned jumpsuit. Probably because some visuals of his magic are straight from Ditko’s Dr. Strange.

Rituals:
The rituals  Unferth uses are barely documented. One laid an Illusion of a road where there was none, though the travellers only realised they had been crossing swamps when the illusion vanished. Another summoned the tiny demon Little Omen, who banishes his victims to Nightmareland. 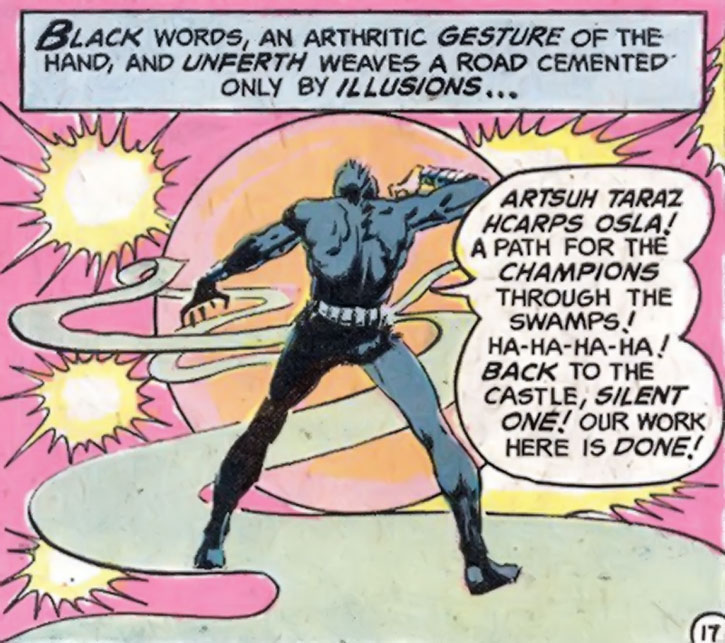 This hulking champion from the Darklands (Africa) used to be the bodyguard of the chief of a pygmy tribe. He decided to accompany Beowulf’s party after meeting them and fighting Beowulf.

There’s not much material about him, but he seemed to be a confident and tactically cunning warrior. Since he’s the Black guy on the party in a 1970s adventure story, I’ve assumed low Hero Points as per the ironclad genre conventions of the day.

Connections:
Beowulf and his companions (Low). 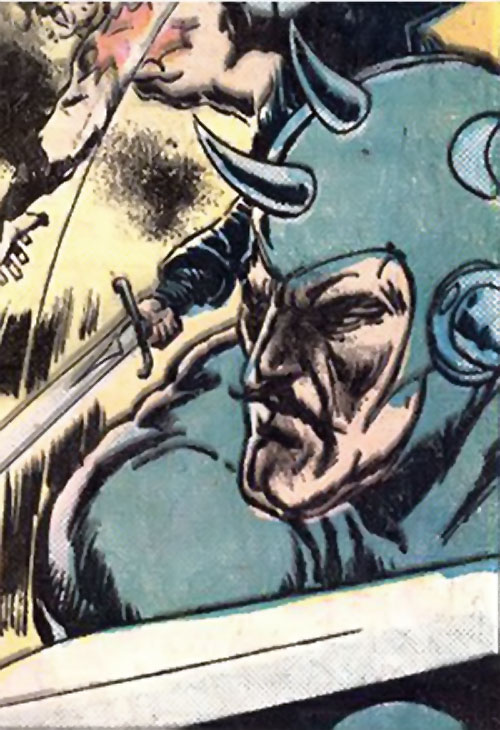 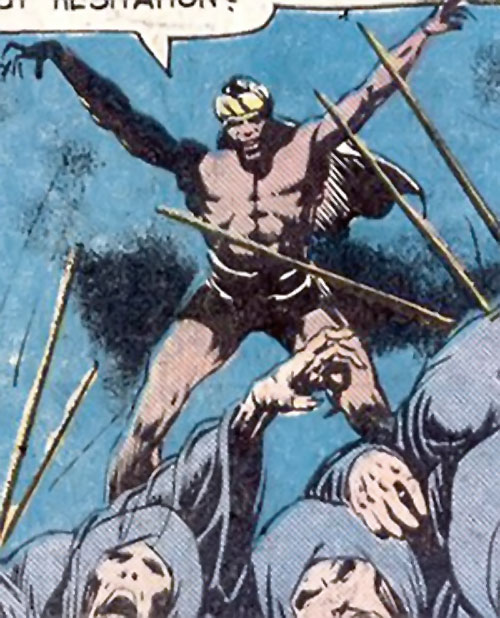 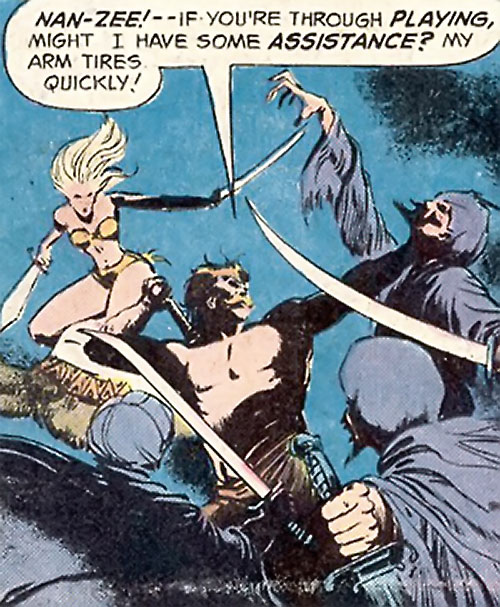