Big Atomic Lantern Boy can fire a beam of variable energy types via the harness on his chest.

See the Super Young Team entry for his time with the team. 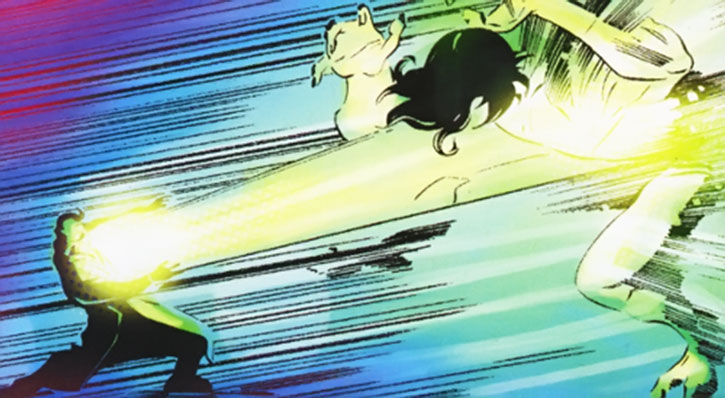 Big Atomic Lantern Boy serves as deputy leader of the Super Young Team. But in practice, he’s had little chance to do any actual leading.

He developed a serious crush on teammate Shiny Happy Aquazon, which is not reciprocated. When the team split up he even started following her around to ensure she was okay. As a result, she’s grown to actively dislike him.

Serious and socially awkward, Big Atomic Lantern Boy has a serious crush on Happy Shiny Aquazon which borders on the creepy stalkerish. He always keeps an eye on her to ensure she’s safe.

Big Atomic Lantern Boy: “This is it ! You have to tell Aquazon how much I love her, Keigo. Tell her I’ve always loved her, like the tree loves to grow, like the sun loves the day…”
Well-Spoken Sonic Lightning Flash: “Doomsday is coming, 10 minutes tops ! Tell her yourself. Make a date.”

Bonuses and Limitations:
Neutralize is Contingent on Energy Blast (-1), only works on Force Fields (-1), and only as long as he maintains the blast after finding the correct frequency (-1).

It’s unclear whether his power is totally artificial, or whether the harness allows him to focus extant abilities. I’ve gone with the powers being his.